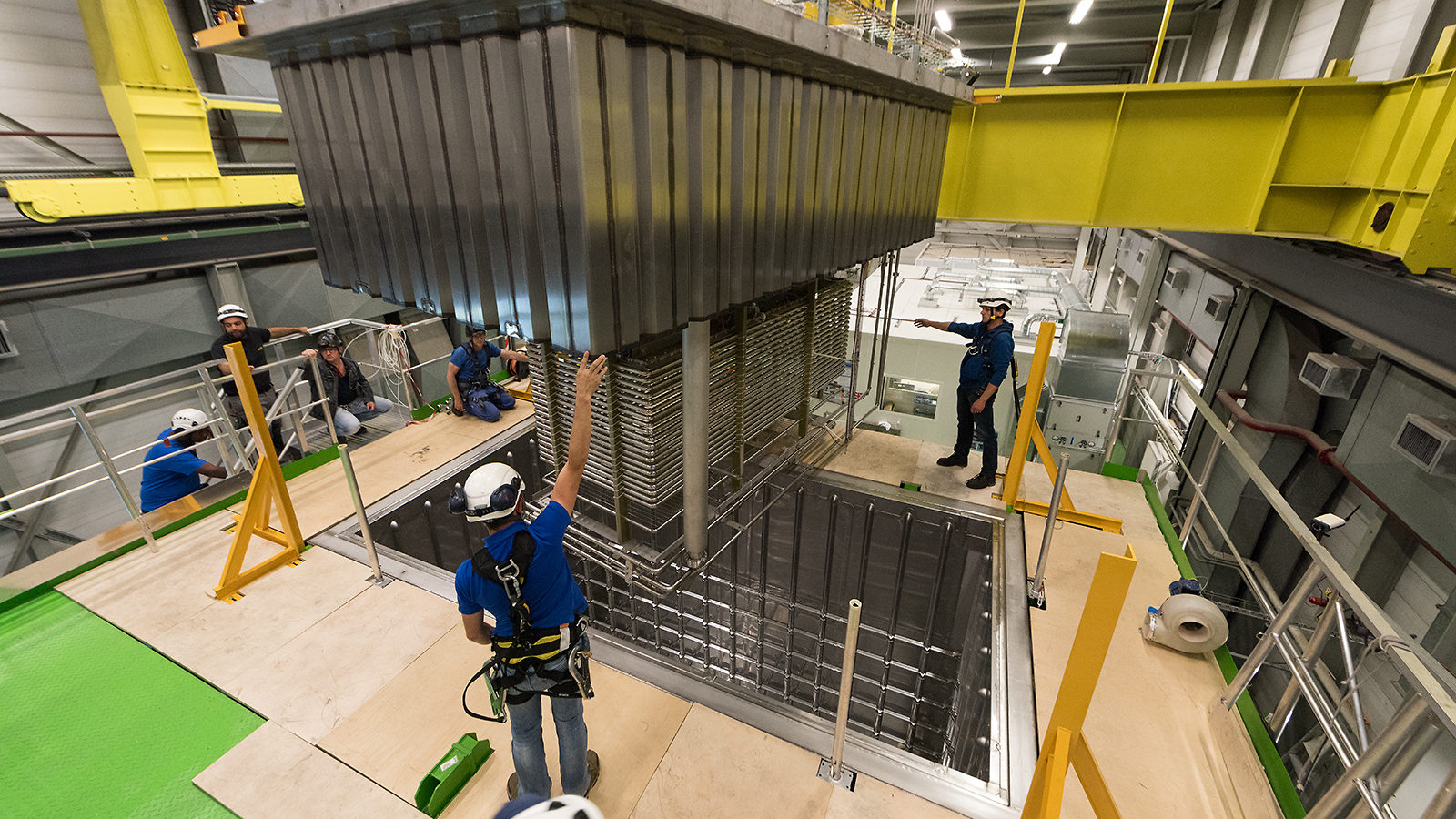 In a lab at CERN sits a very important box. It covers about three parking spaces and is more than a story tall. Sitting inside is a metal device that tracks energetic cosmic particles.

This is a prototype detector, a stepping-stone on the way to the future Deep Underground Neutrino Experiment (DUNE). On June 21, it recorded its first particle tracks.

So begins the largest ever test of an extremely precise method for measuring elusive particles called neutrinos, which may hold the key to why our universe looks the way it does and how it came into being.

The prototype detector is named WA105 3x1x1 (its dimensions in meters) and holds five active tons—3000 liters—of liquid argon. Argon is well suited to interacting with neutrinos then transmitting the subsequent light and electrons for collection. Previous liquid argon neutrino detectors, such as ICARUS and MicroBooNE, detected signals from neutrinos using wires in the liquid argon. But crucially, this new test detector also holds a small amount of gaseous argon, earning it the special status of a two-phase detector.

As particles pass through the detector, they interact with the argon atoms inside. Electrons are stripped off of atoms and drift through the liquid toward an “extraction grid,” which kicks them into the gas. There, large electron multipliers create a cascade of electrons, leading to a stronger signal that scientists can use to reconstruct the particle track in 3D. Previous tests of this method were conducted in small detectors using about 250 active liters of liquid argon.

“This is the first time anyone will demonstrate this technology at this scale,” says Sebastien Murphy, who led the construction of the detector at CERN.

The 3x1x1 test detector represents a big jump in size compared to previous experiments, but it’s small compared to the end goal of DUNE, which will hold 40,000 active tons of liquid argon. Scientists say they will take what they learn and apply it (and some of the actual electronic components) to next-generation single- and dual-phase prototypes, called ProtoDUNE.

The technology used for both types of detectors is a time projection chamber, or TPC. DUNE will stack many large modules snugly together like LEGO blocks to create enormous DUNE detectors, which will catch neutrinos a mile underground at Sanford Underground Research Facility in South Dakota. Overall development for liquid argon TPCs has been going on for close to 40 years, and research and development for the dual-phase for more than a decade. The idea for this particular dual-phase test detector came in 2013.

“The main goal [with WA105 3x1x1] is to demonstrate that we can amplify charges in liquid argon detectors on the same large scale as we do in standard gaseous TPCs,” Murphy says.

By studying neutrinos and antineutrinos that travel 800 miles through the Earth from the US Department of Energy’s Fermi National Accelerator Laboratory to the DUNE detectors, scientists aim to discover differences in the behavior of matter and antimatter. This could point the way toward explaining the abundance of matter over antimatter in the universe. The supersensitive detectors will also be able to capture neutrinos from exploding stars (supernovae), unveiling the formation of neutron stars and black holes. In addition, they allow scientists to hunt for a rare phenomenon called proton decay.

“All the R&D we did for so many years and now want to do with ProtoDUNE is the homework we have to do,” says André Rubbia, the spokesperson for the WA105 3x1x1 experiment and former co-spokesperson for DUNE. “Ultimately, we are all extremely excited by the discovery potential of DUNE itself.” 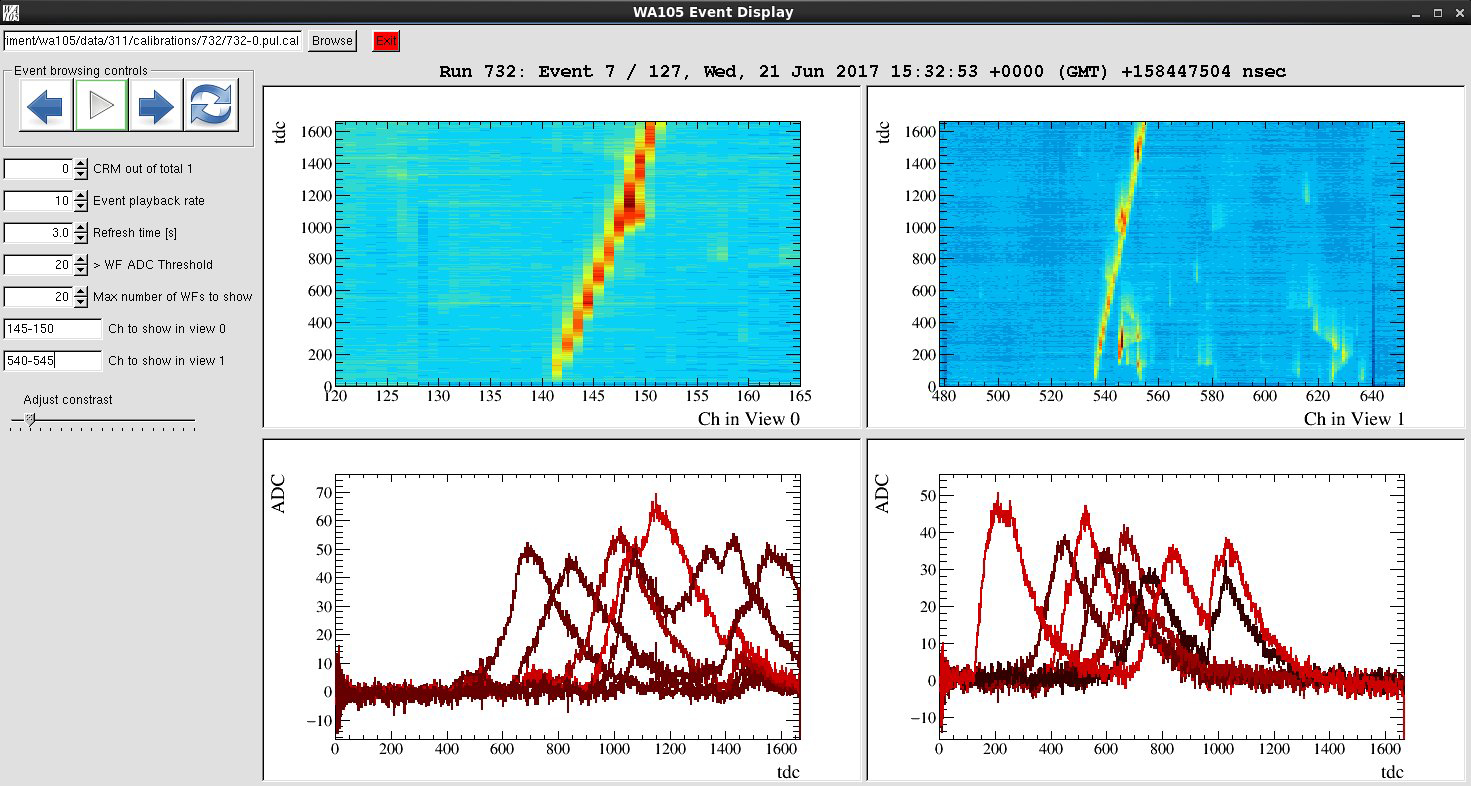 One of the first tracks in the prototype detector, caused by a cosmic ray.

Making sure a dual-phase detector and its electronics work at cryogenic temperatures of minus 184 degrees Celsius (minus 300 degrees Fahrenheit) on a large scale is the primary duty of the prototype detector—but certainly not its only one. The membrane that surrounds the liquid argon and keeps it from spilling out will also undergo a rigorous test. Special cryogenic cameras look for any hot spots where the liquid argon is predisposed to boiling away and might cause voltage breakdowns near electronics.

After many months of hard work, the cryogenic team and those working on the CERN neutrino platform have already successfully corrected issues with the cryostat, resulting in a stable level of incredibly pure liquid argon. The liquid argon has to be pristine and its level just below the large electron multipliers so that the electrons from the liquid will make it into the gaseous argon.

“Adding components to a detector is never trivial, because you’re adding impurities such as water molecules and even dust,” says Laura Manenti, a research associate at the University College London in the UK. “That is why the liquid argon in the 311—and soon to come ProtoDUNEs—has to be recirculated and purified constantly.”

While ultimately the full-scale DUNE detectors will sit in the most intense neutrino beam in the world, scientists are testing the WA105 3x1x1 components using muons from cosmic rays, high-energy particles arriving from space. These efforts are supported by many groups, including the Department of Energy’s Office of Science.

The plan is now to run the experiment, gather as much data as possible, and then move on to even bigger territory.

“The prospect of starting DUNE is very exciting, and we have to deliver the best possible detector,” Rubbia says. “One step at a time, we’re climbing a large mountain. We’re not at the top of Everest yet, but we’re reaching the first chalet.”