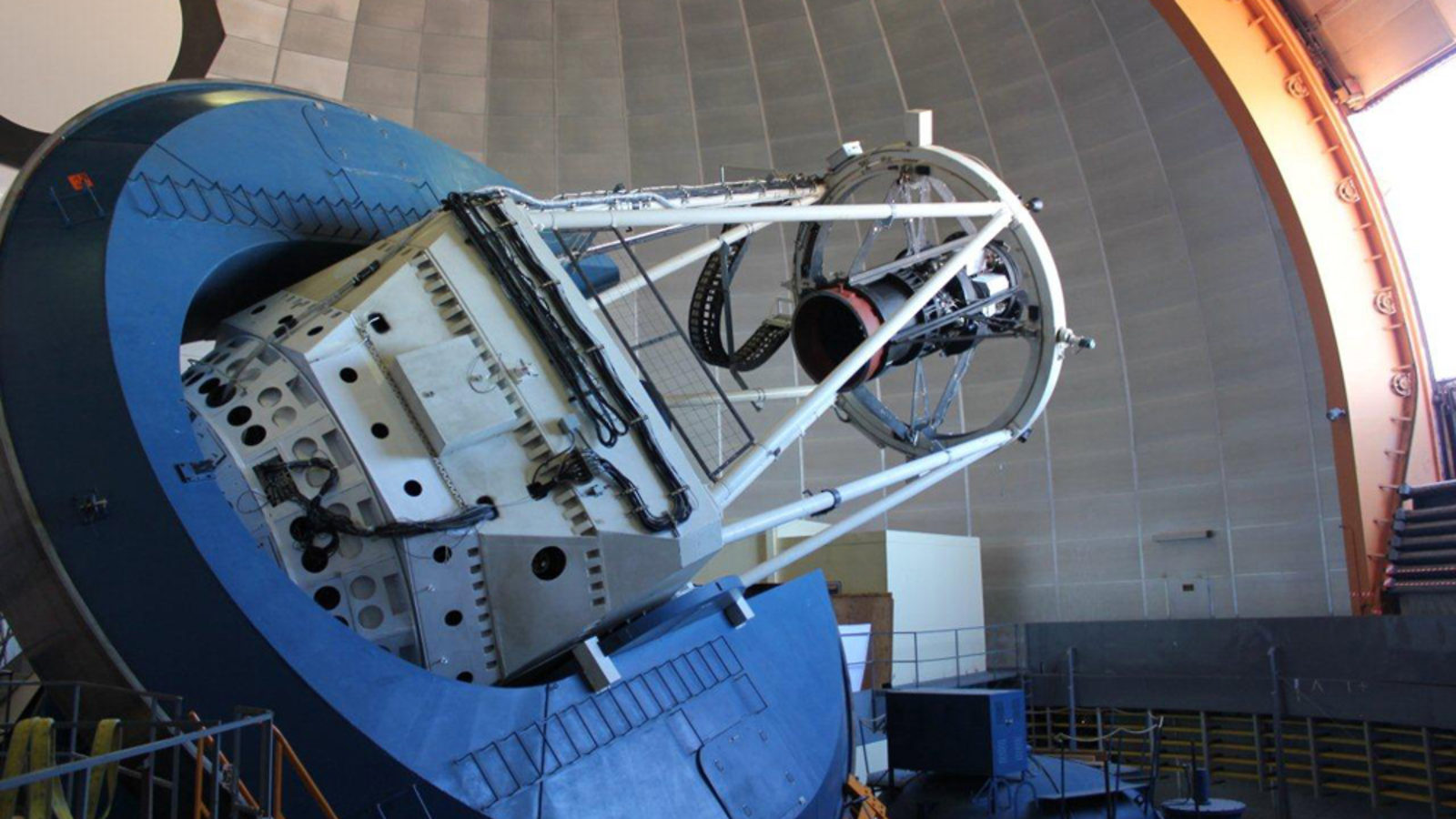 Eight billion years ago, rays of light from distant galaxies began their long journey to Earth. That ancient starlight has now found its way to a mountaintop in Chile, where the newly constructed Dark Energy Camera, the most powerful sky-mapping machine ever created, has captured and recorded it for the first time.

That light may hold within it the answer to one of the biggest mysteries in physics—why the expansion of the universe is speeding up.

Scientists in the international Dark Energy Survey collaboration announced this week that the Dark Energy Camera, the product of eight years of planning and construction by scientists, engineers, and technicians on three continents, has achieved first light. The first pictures of the southern sky were taken by the 570-megapixel camera on Sept. 12.

“The achievement of first light through the Dark Energy Camera begins a significant new era in our exploration of the cosmic frontier,” said James Siegrist, associate director of science for high energy physics with the U.S. Department of Energy. “The results of this survey will bring us closer to understanding the mystery of dark energy, and what it means for the universe.”

The Dark Energy Camera was constructed at the U.S. Department of Energy’s (DOE) Fermi National Accelerator Laboratory in Batavia, Illinois, and mounted on the Victor M. Blanco telescope at the National Science Foundation’s Cerro Tololo Inter-American Observatory (CTIO) in Chile, which is the southern branch of the U.S. National Optical Astronomy Observatory (NOAO). With this device, roughly the size of a phone booth, astronomers and physicists will probe the mystery of dark energy, the force they believe is causing the universe to expand faster and faster.

“The Dark Energy Survey will help us understand why the expansion of the universe is accelerating, rather than slowing due to gravity,” said Brenna Flaugher, project manager and scientist at Fermilab. “It is extremely satisfying to see the efforts of all the people involved in this project finally come together.”

The Dark Energy Camera is the most powerful survey instrument of its kind, able to see light from over 100,000 galaxies up to 8 billion light years away in each snapshot. The camera’s array of 62 charged-coupled devices has an unprecedented sensitivity to very red light, and along with the Blanco telescope’s large light-gathering mirror (which spans 13 feet across), will allow scientists from around the world to pursue investigations ranging from studies of asteroids in our own Solar System to the understanding of the origins and the fate of the universe.

“We’re very excited to bring the Dark Energy Camera online and make it available for the astronomical community through NOAO's open access telescope allocation,” said Chris Smith, director of the Cerro-Tololo Inter-American Observatory. “With it, we provide astronomers from all over the world a powerful new tool to explore the outstanding questions of our time, perhaps the most pressing of which is the nature of dark energy.”

Scientists in the Dark Energy Survey collaboration will use the new camera to carry out the largest galaxy survey ever undertaken, and will use that data to carry out four probes of dark energy, studying galaxy clusters, supernovae, the large-scale clumping of galaxies and weak gravitational lensing. This will be the first time all four of these methods will be possible in a single experiment.

The Dark Energy Survey is expected to begin in December, after the camera is fully tested, and will take advantage of the excellent atmospheric conditions in the Chilean Andes to deliver pictures with the sharpest resolution seen in such a wide-field astronomy survey. In just its first few nights of testing, the camera has already delivered images with excellent and nearly uniform spatial resolution.

Over five years, the survey will create detailed color images of one-eighth of the sky, or 5,000 square degrees, to discover and measure 300 million galaxies, 100,000 galaxy clusters and 4,000 supernovae.