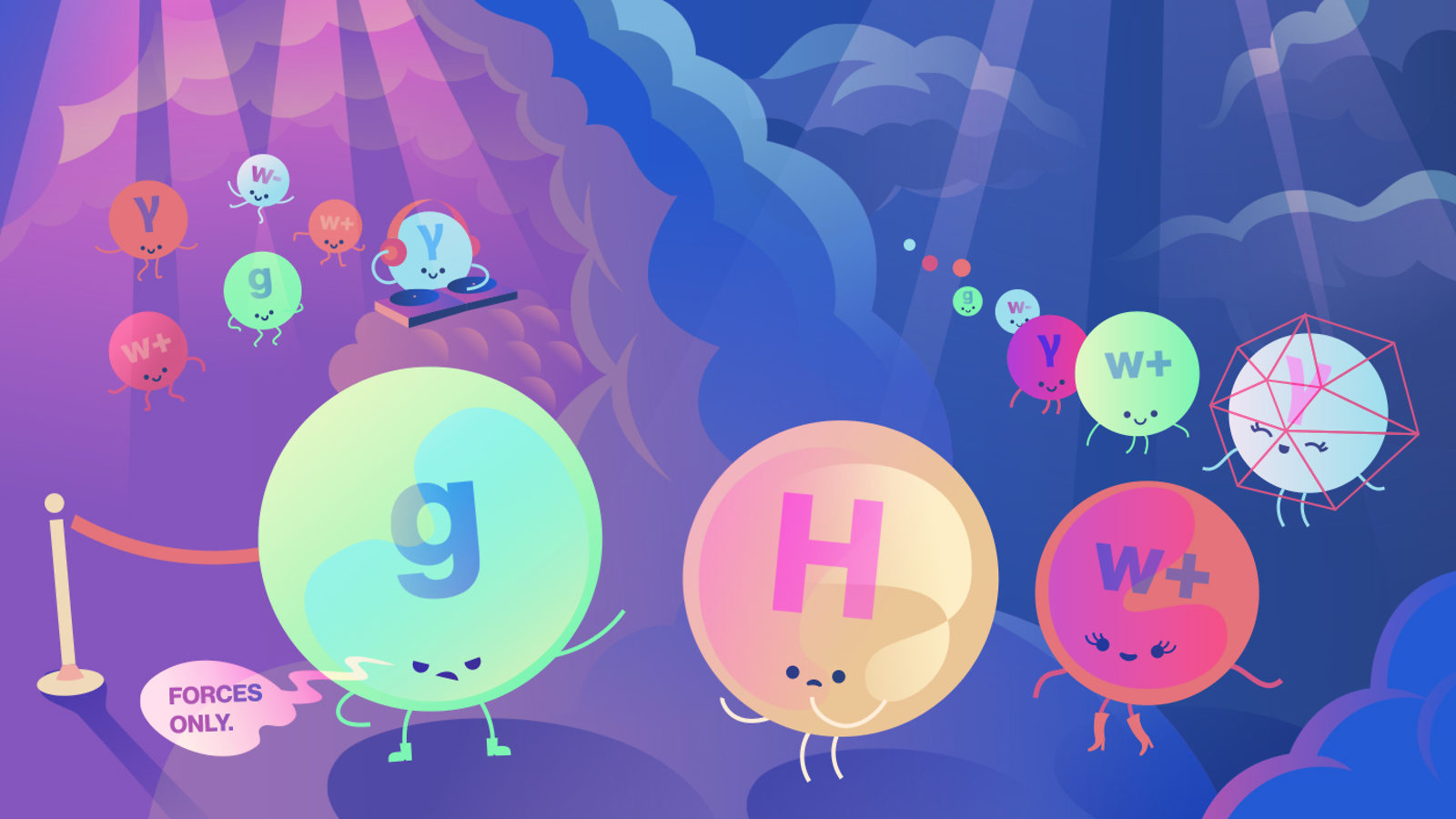 If you were Luke Skywalker in Star Wars, and you carried a tiny green Jedi master on your back through the jungles of Dagobah for long enough, you could eventually raise your submerged X-wing out of the swamp just by using the Force.

But if you were a boson in the Standard Model of particle physics, you could skip the training—you would be the force.

Bosons are particles that carry the four fundamental forces. These forces push and pull what would otherwise have been an unwieldy soup of particles into the beautiful mosaic of stars and galaxies that permeate the visible universe.

The fundamental forces keep protons incredibly stable (the strong force holds them together), cause compasses to point north (the electromagnetic force attracts the needle), make apples fall off trees (gravity attracts the fruit to the ground), and keep the sun shining (the weak force allows nuclear fusion to occur).

In 2012, the Higgs boson became an officially recognized member of this family of fundamental bosons.

The Higgs is called a boson because of a quantum mechanical property called spin—which represents a particle’s intrinsic angular momentum and characterizes how a particle plays with its Standard Model friends.

The Higgs has a spin of 0, making it officially a boson.

“Every boson is associated with one of the four fundamental forces,” says Kyle Cranmer, an associate professor of physics at New York University. “So if we discover a new boson, it seems natural that we should find a new force.”

Scientists think that a Higgs force does exist. But it’s the Higgs boson’s relationship to that force that makes it a bit of a black sheep. It’s the reason that, when the Higgs is added to the Standard Model of particle physics, it’s often pictured apart from the rest of the boson family.

What the Higgs is for

The Higgs boson is an excitation of the Higgs field, which interacts with some of the fundamental particles to give them mass.

“The way the Higgs field gives masses to particles is its own unique feature, which is different from all other known fields in the universe,” says Matt Strassler, a Harvard University theoretical physicist. “When the Higgs field turns on, it changes the environment for all particles; it changes the nature of empty space itself. The way particles interact with this field is based on their intrinsic properties.”

There are three inherent qualifications required for a field to generate a force: The field must be able to switch on and off. It must have a preferred direction. And it must be able to attract or repel.

Normally the Higgs field fails the first two requirements—it’s always on, with no preferred direction. But in the presence of a Higgs boson, the field is distorted, theoretically allowing it to generate a force.

“We think that two particles can pull on each other using the Higgs field,” Strassler says. “The same equations we used to predict that the Higgs particle should exist, and how it should decay to other particles, also predict this force will exist.”

Just what role that force might play in our greater understanding of the universe is still a mystery.

“We know the Higgs field is essential in the formation of stable matter,” Strassler says. “But the Higgs force—as far as we know—is not.”

The Higgs force could be important in some other way, Strassler says. It could be related to how much dark matter exists in the universe or the huge imbalance between matter and antimatter. “It’s too early to write it off,” he says.

During this run of the Large Hadron Collider, physicists expect to produce roughly 10 times as many Higgs bosons as they did during the first run. This will enable scientists to examine the properties of this peculiar particle more deeply.