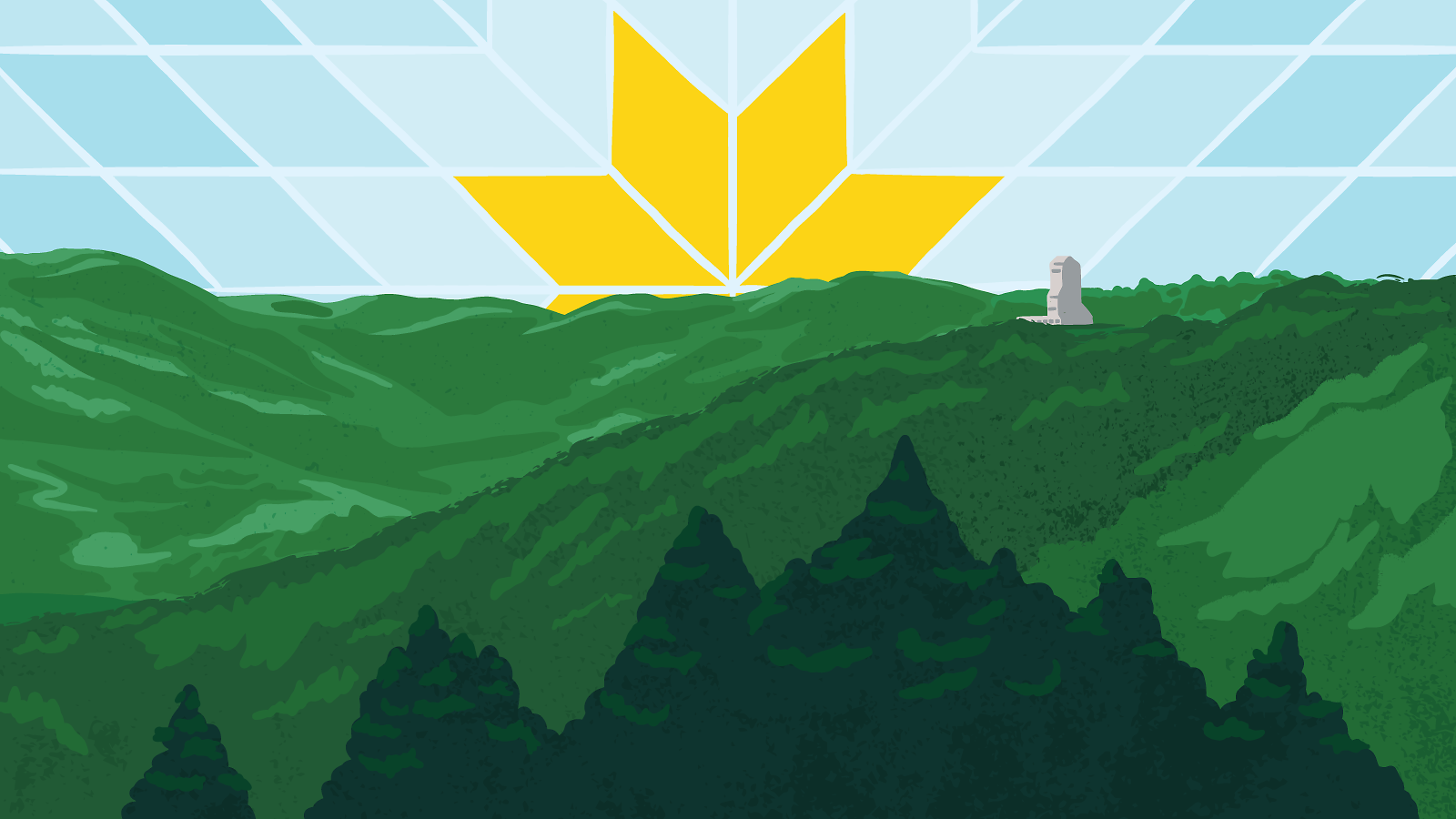 The name of the Black Hills mountain range in western South Dakota is a translation of the name the Lakota (Sioux) gave the area: Paha Sapa, “hills that are black.” The description evokes the mountains’ dark-colored ponderosa pine. Nine federally recognized South Dakota tribes and 18 other land-based tribes have spiritual and cultural connections to the Black Hills.

From above, the area is shaped like a human heart—fitting because the Lakota consider it “the heart of all that is,” says Jace DeCory, professor emerita of American Indian Studies at Black Hills State University.

DeCory is Lakota, with family ties to several Lakota communities in South Dakota. Since retiring from teaching, she has given numerous talks to non-Native groups about the historical and cultural significance of the Black Hills to Native Americans.

“The Black Hills are a sacred and special place with the Lakota and other tribal groups.”

One place she has come to speak is the Sanford Underground Research Facility, also called SURF, located within the Black Hills themselves. DeCory’s talks are one way the employees of the underground laboratory—now host to experiments in physics, geology and engineering—work to appreciate the heritage of the Black Hills and understand the history of the disused gold mine that the lab now inhabits.

The scars of the past

People have lived in the Black Hills for 10,000 years. Through the centuries, the Arikara, Cheyenne, Crow, Pawnee, Kiowa, Arapaho and Lakota have all called the mountains home.

“The Black Hills are a sacred and special place with the Lakota and other tribal groups. Many plants are gathered here for medicine, for healing, for ceremonial use,” DeCory says. “Food is collected here, and other things that are used for utilitarian purposes. It is our sacred responsibility as descendants of our ancestors to take care of it, honor it, respect it, protect it and preserve it.”

The second Fort Laramie Treaty in 1868 between the US government and the Lakota and Arapaho nations designated 20 million acres of land, including the Black Hills, “for the absolute and undisturbed use and occupation” of the Lakota.

After a US Army expedition led by then-Lieutenant-Colonel George Custer found gold in the area in 1874, however, the US reneged on the agreement, redrew the lines of the treaty, and seized the Black Hills.

The Homestake Gold Mine was founded in 1876. It became the largest, deepest and most productive gold mine in North America. Over 126 years, the mine produced 41 million ounces of gold using both an open-pit surface mine and 370 miles of underground mining tunnels.

When Homestake stopped its mining operations in 2002, the underground caverns began filling up with water. According to DeCory, many elders thought that would be the end of the story. But the scene had already been set for the mine’s second life: as a research facility. Also in 2002, chemist Ray Davis was awarded a share of the Nobel Prize in Physics for an experiment he conducted in a cavern off Homestake’s Yates shaft starting in the 1960s.

Davis had asked the mining company to host a particle detector deep underground, where it could be shielded from cosmic radiation, to study difficult-to-detect particles called neutrinos. Guarded by a mile of rock, the detector was able to catch neutrinos coming from the sun, and pave the way for the discovery of neutrino oscillations.

In 2006, Barrick Gold Corporation mining company, which had purchased Homestake, donated the mine in Lead to the South Dakota Science and Technology Authority. SDSTA began the work of converting it into an underground laboratory the following year.

Mike Headley, the executive director of SURF since 2013, says that from the beginning, the lab’s intent has been to operate in a way that will demonstrate that their presence in the Black Hills is motivated solely by the pursuit of knowledge. Beyond that, they’re “working very hard to do things in a way that's respectful to the land,” he says.

A point of contact between SURF and the local tribes is Daryl “KC” Russell, the SURF Cultural Diversity Coordinator, also Lakota and a member of the Lower Brule Sioux Tribe. When SURF was relatively new, Russell met with the lab director almost daily, and he got to know as many staff members as possible to help them get comfortable asking questions about cultural matters.

“I try to be an example to others to not be afraid to ask,” he says. It’s important that people “investigate things and find out whether one tribe is different from other tribes and what their different views are.”

SURF also maintains a Cultural Advisory Committee, which meets three times a year to discuss and advise SURF leadership about activities in the context of their cultural implications for Native American communities.

Headley admits there’s a lot he didn’t know about the views of the different tribes when he came into his position. He says he has learned a lot from Russell and the Cultural Advisory Committee about how to respectfully manage a research facility on sacred land.

Part of Russell’s role is to communicate SURF’s plans to Tribal Chairpersons and Presidents and to cultural preservation offices for consultation, to ensure they are included in decision-making. He impressed upon the lab leadership that it’s more than a formality: “Consultation is not something you do after you start a project. You’re asking the tribes for input,” he says. “If you’re not prepared to hear ‘no,’ you’re not truly doing consultation.”

Many Lakota tribes elect new leadership every two years, so there are often new people to reach out to. Inevitably, some are more comfortable with the lab than others. “It's a slow-going process. You have to be patient,” Russell says.

From negative to positive

Members of some tribes around the Black Hills precede any groundbreaking with a ceremony seeking permission from the Earth and the Creator. “The Lakotas and some Dakotas and Nakotas believe that digging into Mother Earth is desecration,” Russell says.

A few years ago, Russell brought several Tribal Presidents, Chairpersons and Council members on a tour of SURF. He says he wanted to demonstrate that the people there are serious about forging a good relationship with them. “It assured them we weren't trying to desecrate, but we’re beautifying the underground to something that will benefit their children and grandchildren.”

SURF’s educational initiatives are a big emphasis for Russell, because they have a tangible impact on students and their families. SURF reaches 82% of counties in South Dakota with its educational programming.

It’s something Russell says he often brings up when he communicates with tribal leaders. He talks about an intern from the Oglala Lakota tribe who came back to her community after college to work on water treatment.

SURF currently employs six Native American staff members. Headley says he hopes to grow that number. “We still have more work to do to build a workforce that's representative of the population within the state,” he says.

SURF is making an effort to incorporate more “Native ways of knowing” into their programs. They have been working on plans for an ethnobotanical garden featuring a medicine wheel and plants native to the area. They’ve chosen a spot with a clear view of the mountains and sky that will be perfect for stargazing. The garden will provide a quiet place for visitors to reflect and learn about the deeply entwined culture and botany of the Black Hills.

“It’s important for young people in the area and our Native kids to see examples of the plants that grow here in the Black Hills, and how our people used them for generations to doctor our people and use in ceremony,” DeCory says.

SURF’s public events also incorporate Native American culture and knowledge. In 2020, artist Jeremy Red Eagle did a virtual event talking about how traditional games and activities can help people better understand the Dakota language and culture. This year, a Native American astrophysicist and artist is scheduled to speak at the lab’s annual Neutrino Day celebration.

Building for the future

The next big experiment under construction is building directly on the lab’s research roots; the international Deep Underground Neutrino Experiment, hosted by the Department of Energy’s Fermi National Accelerator Laboratory, will take on some remaining questions about those difficult-to-detect neutrinos that Davis once investigated.

To catch the elusive particles, four gigantic DUNE detectors will be constructed at SURF, each four stories high and larger than an Olympic-sized swimming pool. In accordance with the tribes’ wishes, neither SURF nor any other entity will profit from the rock they remove to build the DUNE caverns—the rock will remain in the Black Hills.

Barrick Gold Corporation—which still owns the remains of Homestake’s open-pit mine, called the Open Cut—worked with SURF to ensure this could happen. “The SDSTA worked closely with Barrick to get an easement in place that would allow the excavated rock to be placed in the Open Cut,” Headley says. “The agreement was signed in October 2015 and allowed for the rock to be moved by conveyor system rather than by truck to a location farther away.”

Starting this summer, 3000 tons of granite removed from the cavern will tumble every weekday from a conveyor belt into the pit, which is one mile long and one mile wide and reaches a depth of 1250 feet.

The weight of the rock that will be removed over the next two years will add up to almost 800,000 tons—double the weight of the Empire State Building. Still, it will fill less than 1% of the Open Cut. It’s a powerful reminder that inclusion and relationship-building are not trivial; they require consistent and intentional effort.

On one of DeCory’s visits to SURF, she said a prayer that the lab would bring positive things. “I put tobacco on some rock samples and I prayed that what they would do there would help people and give us a better understanding of our universe.”