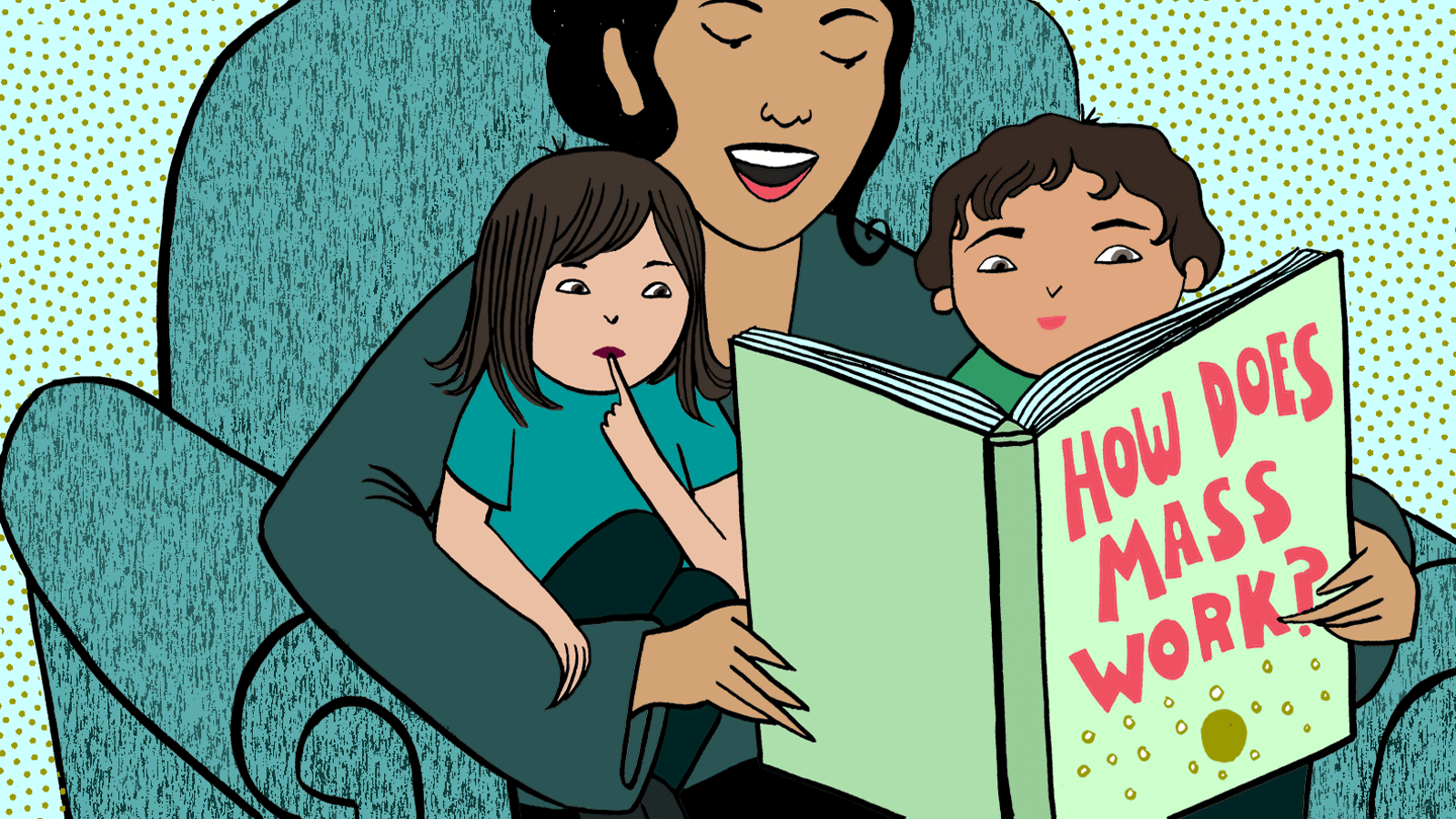 The story of particle mass starts right after the big bang. During the very first moments of the universe, almost all particles were massless, traveling at the speed of light in a very hot “primordial soup.” At some point during this period, the Higgs field turned on, permeating the universe and giving mass to the elementary particles.

The Higgs field changed the environment when it was turned on, altering the way that particles behave. Some of the most common metaphors compare the Higgs field to a vat of molasses or thick syrup, which slows some particles as they travel through.

Others have envisioned the Higgs field as a crowd at a party or a horde of paparazzi. As famous scientists or A-list celebrities pass through, people surround them, slowing them down, but less-known faces travel through the crowds unnoticed. In these cases, popularity is synonymous with mass—the more popular you are, the more you will interact with the crowd, and the more “massive” you will be.

“This is part of why finding the Higgs field is just the beginning—because we have a ton of questions,” says Matt Strassler, a theoretical physicist and associate of the Harvard University physics department.

The strong force and you

The Higgs field gives mass to fundamental particles—the electrons, quarks and other building blocks that cannot be broken into smaller parts. But these still only account for a tiny proportion of the universe’s mass.

The rest comes from protons and neutrons, which get almost all their mass from the strong nuclear force. These particles are each made up of three quarks moving at breakneck speeds that are bound together by gluons, the particles that carry the strong force. The energy of this interaction between quarks and gluons is what gives protons and neutrons their mass. Keep in mind Einstein’s famous E=mc2, which equates energy and mass. That makes mass a secret storage facility for energy.

“When you put three quarks together to create a proton, you end up binding up an enormous energy density in a small region in space,” says John Lajoie, a physicist at Iowa State University.

A proton is made of two up quarks and a down quark; a neutron is made of two down quarks and an up quark. Their similar composition makes the mass they acquire from the strong force nearly identical. However, neutrons are slightly more massive than protons—and this difference is crucial. The process of neutrons decaying into protons promotes chemistry, and thus, biology. If protons were heavier, they would instead decay into neutrons, and the universe as we know it would not exist.

“As it turns out, the down quarks interact more strongly with the Higgs [field], so they have a bit more mass,” says Andreas Kronfeld, a theoretical physicist at Fermilab. This is why the tiny difference between proton and neutron mass exists.

But what about neutrinos?

We’ve learned that the elementary particles get their mass from the Higgs field—but wait! There may be an exception: neutrinos. Neutrinos are in a class by themselves; they have extremely tiny masses (a million times smaller than the electron, the second lightest particle), are electrically neutral and rarely interact with matter.

Scientists are puzzled as to why neutrinos are so light. Theorists are currently considering multiple possibilities. It might be explained if neutrinos are their own antiparticles—that is, if the antimatter version is identical to the matter version. If physicists discover that this is the case, it would mean that neutrinos get their mass from somewhere other than the Higgs boson, which physicists discovered in 2012.

Neutrinos must get their mass from a Higgs-like field, which is electrically neutral and spans the entire universe. This could be the same Higgs that gives mass to the other elementary particles, or it could be a very distant cousin. In some theories, neutrino mass also comes from an additional, brand new source that could hold the answers to other lingering particle physics mysteries.

“People tend to get excited about this possibility because it can be interpreted as evidence for a brand new energy scale, naively unrelated to the Higgs phenomenon,” says André de Gouvêa, a theoretical particle physicist at Northwestern University.

This new mechanism may also be related to how dark matter, which physicists think is made up of yet undiscovered particles, gets its mass.

“Nature tends to be economical, so it's possible that the same new set of particles explains all of these weird phenomena that we haven't explained yet,” de Gouvêa says.