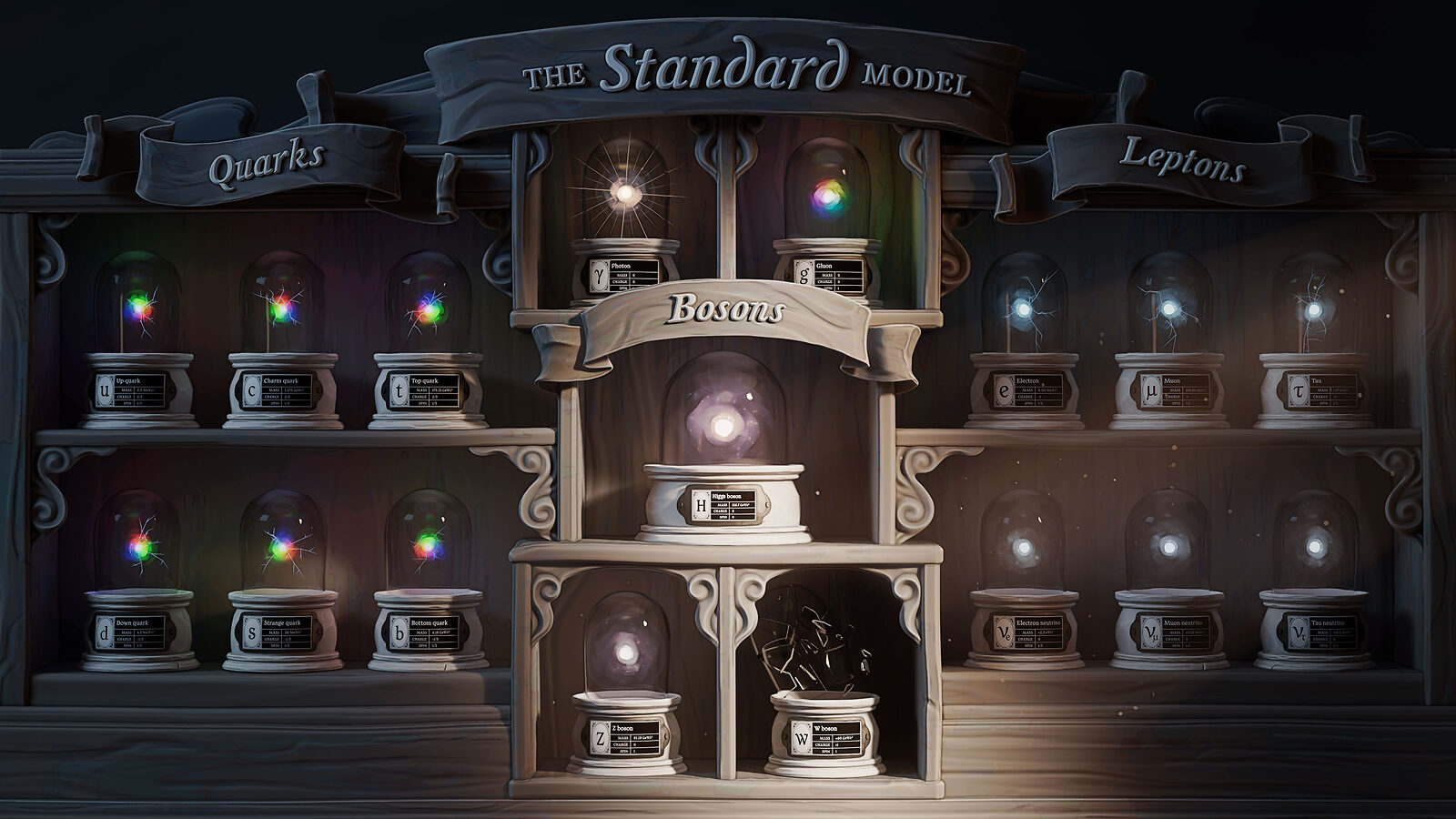 “If you discuss too much with each other right from the beginning, you might end up reproducing someone else’s thoughts,” he says. “Take your best shot and see how far you can go. Once you get to the end, then—and only then—get together with your colleagues and compare.”

As researchers, Kotwal and his colleagues apply this same methodology. Independent teams of scientists tackle the same fundamental problems using distinct detectors and techniques. Only after making their measurement do the physicists compare their methodology and results with those from other experiments.

But unlike for Kotwal’s students, the right answer is not listed in the back of a book.

“We’re searching for the facts with as much rigor as we can,” Kotwal says. “I think that the excitement of figuring something out is almost as much as what the answer will be.”

Kotwal works on the CDF experiment at the US Department of Energy’s Fermi National Accelerator Laboratory. For the last 27 years, he and his colleagues have worked on measuring the mass of the W boson, a fundamental particle responsible for nuclear fusion and decay. They published their most recent measurement in the journal Science in April.

Since the W boson was discovered in 1983, physicists on eight different experiments have measured its mass a total of 10 times. Every other time, the measurement has fit within the range predicted by the Standard Model. But this time, to the surprise of everyone, it did not; it came in higher than expected.

“We knew that CDF was working on this,” says Mika Vesterinen, a researcher at the University of Warwick. “We could extrapolate from their previous measurement in 2012 and guess what the uncertainty was going to be. But the central value was a complete shock. We were not expecting that.”

Theorists immediately published dozens of papers speculating what new physics could be bolstering the W boson’s mass. “It’s not in agreement with the theory, so something must be wrong,” says Matthias Schott, an experimental physicist and professor at Johannes Gutenberg University Mainz. “Either our theory is wrong, or the measurement is wrong.”

In astronomy, the masses and motions of different celestial bodies affect one another. These connections allow scientists to use the measurements they know to solve for the ones they don’t. Perturbations in Uranus’ orbit, for example, allowed scientists to infer the existence of Neptune long before they were able to see it with a telescope.

Fundamental particles participate in a similar balancing act, the rules of which are outlined by the Standard Model, the best description scientists have of the subatomic world. The better scientists understand one particle, the better they can estimate the properties of others.

Schott remembers applying this principle to his work as an ATLAS fellow at CERN shortly before the start-up of the Large Hadron Collider. “Before the Higgs boson discovery, we used the W boson mass to restrict the range where the Higgs boson could be,” Schott says.

According to Schott, if the new CDF measurement is correct, then it means something must be missing from the theory. “It would mean we forgot something in the prediction,” he says. “There would need to be new physics.”

However, scientists still have more to investigate before they assume that’s the case. While many measurements in physics line up, it’s not uncommon for the results of different experiments to disagree.

The mass of the W boson has been particularly enigmatic because W bosons are notoriously difficult to measure.

“It was the pinnacle of the CDF and DZero programs.”

As a PhD student based at Fermilab in the late 2000s, Vesterinen became enthralled by the complexity of the W boson mass measurements. “It was the pinnacle of the CDF and DZero programs,” Vesterinen says. “I looked in awe at those measurements.”

A decade later, he decided to tackle the same measurement on the LHCb experiment.

W bosons, like most heavy fundamental particles, are so short-lived that scientists will never see them directly. Instead, scientists capture the W boson’s decay products and measure their momenta.

Scientists already know the mass of the decay products, so by using the theorems of energy and momentum conservation, they can figure out the mass of the parent particle by measuring the energy and trajectory of the secondary particles.

What makes the W boson mass measurement so difficult is that only half of the byproducts are visible. “W bosons decay into a neutrino accompanied by an electron or a muon,” Kotwal says. “We cannot measure neutrinos. That immediately throws in an enormous monkey wrench.”

Neutrinos are ghostly particles that rarely interact with ordinary matter. Seeing a neutrino from a W boson in a collider detector is physically impossible.

“In high school algebra, we learn that solving an equation with two unknowns is not possible,” Kotwal says. “Trying to figure out the momenta of the W bosons before they decay is not trivial.”

How they did it

Because half of the W boson decay products are invisible, the scientists needed to make sure that what they could measure was as accurate as possible. According to Kotwal, a measurement is only as good as your tools.

“If I’m trying to measure your height with a yard stick, maybe I could get down to the millimeter-level precision,” he says. “But how do I know if my yard stick is accurate?”

Before attempting the W boson mass measurement, Kotwal and his colleagues calibrated their detector by revisiting the basics. They re-measured the mass of a particle they already knew extremely well: the J/psi particle, which was discovered in 1974 and consists of two bound charm quarks. Once they had reconfirmed the J/psi mass, they used it to re-measure the mass of another well-understood composite particle, the Upsilon, which is made up of two bound bottom quarks. Finally, they used both measurements to re-measure the mass of the Z boson, a close cousin of the W boson.

“We used the first to get the second, then the first and the second to get the third, and finally all three to get the W boson mass,” Kotwal says. “Doing it this way builds in consistency and accuracy checks. It forces you to put scrutiny into every step.”

Every little detail matters, Vesterinen says. “For instance, if we shifted the LHCb detector by the width of a human hair, we would shift the W boson mass by 50 [million electronvolts].”

In addition to calibrating the detector, scientists needed to unravel what is happening when the W bosons are produced inside their collider.

“W bosons are produced from the collision of quarks and antiquarks,” Kotwal says. “These are moving very fast, and so each W boson is moving very fast. We had to figure out how fast it was moving and in which direction. This is at the heart of all the additional complications that show up.”

To estimate how fast each W boson was moving before it decayed, scientists used all the available information about the accelerator, the structure of the proton (and anti-proton), the theory of collisions, and numerous other measurements from their detector. In this way, they could zoom in on the W bosons’ velocities from the outside in.

All the work paid off: The new CDF measurement is the most precise measurement of the W boson yet. “The new measurement with CDF is really spectacular in terms of precision,” Schott says. “From the calibration point of view, it’s really beautiful.”

However, most precise does not necessarily mean most accurate. Vesterinen likens it to shooting hoops in basketball. “High precision means you’re always throwing the ball to the same spot,” Vesterinen says. “But you could still be missing the net.”

Before rewriting the laws of physics, the scientific community is looking for any alternative explanation as to why this new measurement is so different from what the Standard Model predicts. 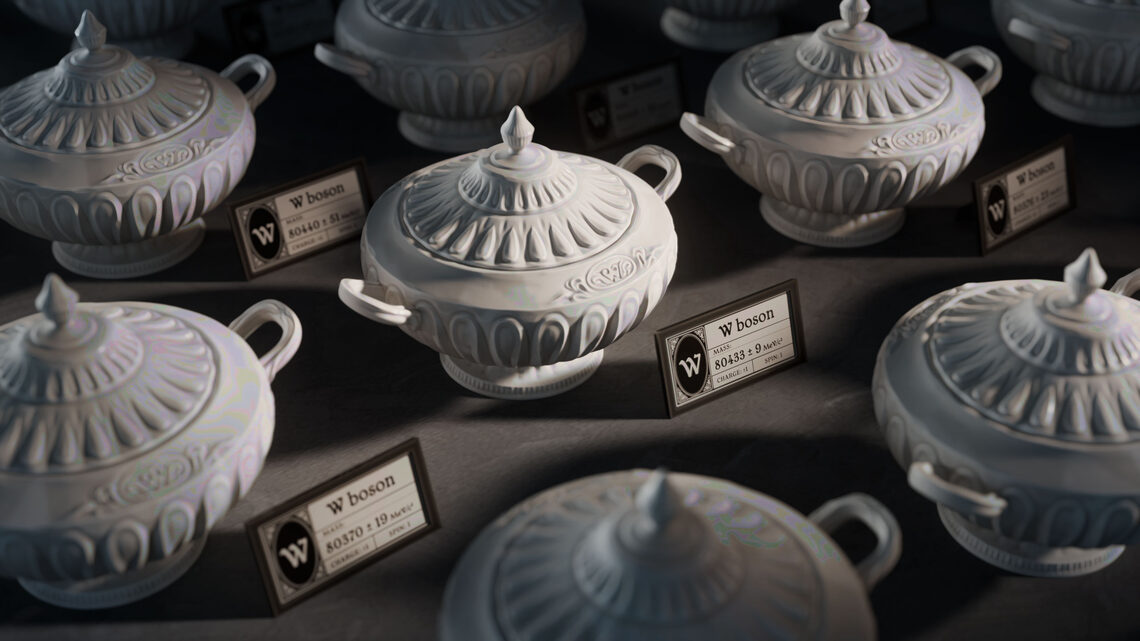 No two of the 10 measurements scientists have made of the W boson mass have been the same. This doesn’t surprise Kotwal, who likens measuring the mass of a particle to cooking his favorite dish, Thai red curry.

“There’s just the right amount of spice and fresh veggies,” he says. “Yet every restaurant does it slightly differently.”

Even though the ingredients and fundamental principles are the same, small differences can accumulate into noticeable discrepancies. “It could be that one restaurant got their ginger from this field, and another restaurant got their ginger from this other field with slightly different soil. What is the best ginger to use?” Kotwal says. “It’s like that with physics, except for us it’s not subjective—there is a right answer.”

According to Vesterinen, the next step is to examine the ingredients that went into the CDF analysis and then see what comes out of the LHC.

“This is not going to be resolved in the short term,” Vesterinen says. “It’s taken an immense effort by the people working on CDF to produce this new result. Measuring the W boson mass is certainly a priority at the LHC.”