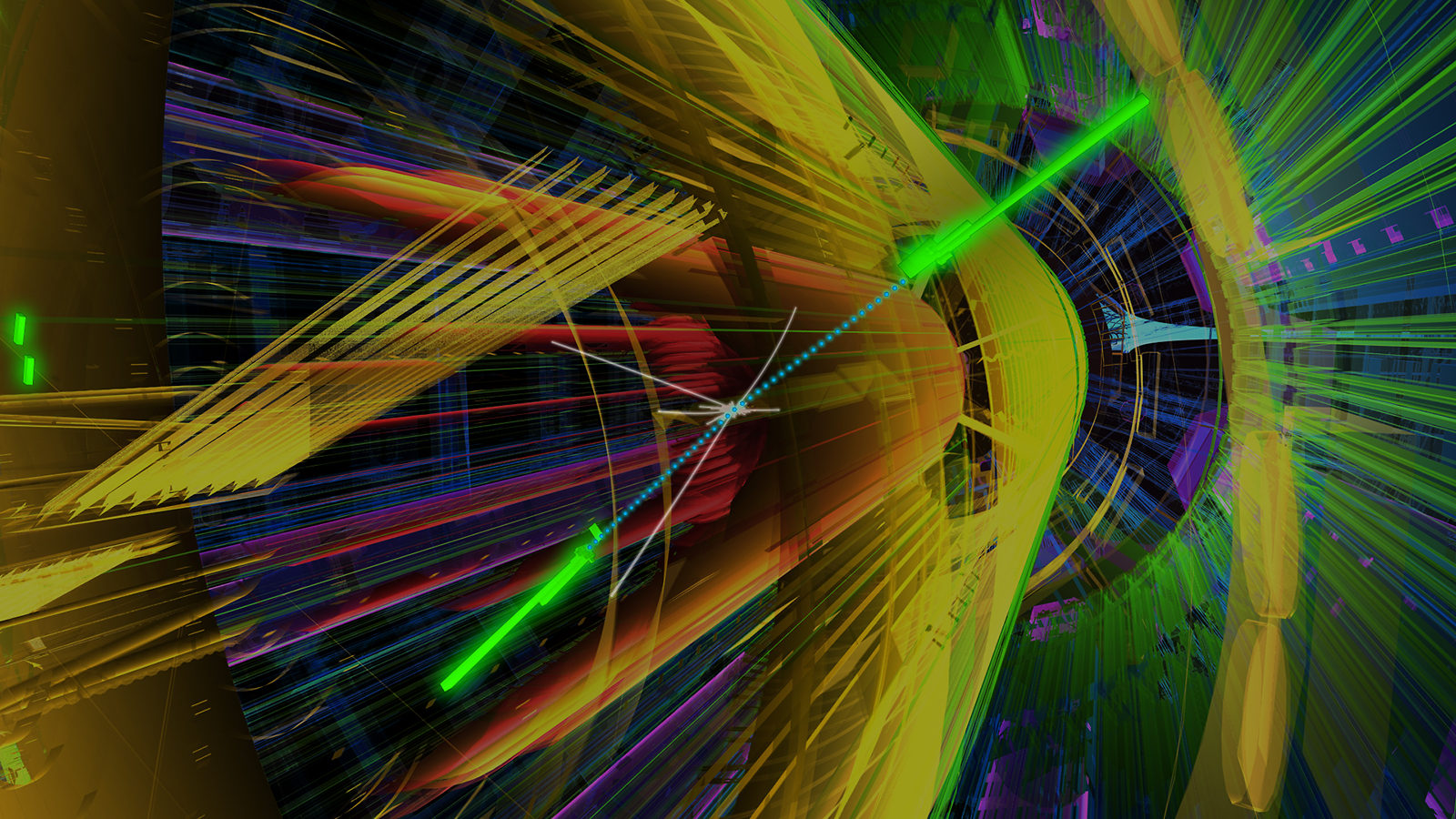 The Large Hadron Collider is definitely large. With a 17-mile circumference, it is the biggest collider on the planet. But the latter fraction of its name is a little misleading. That’s because what collides in the LHC are the tiny pieces inside the hadrons, not the hadrons themselves.

Hadrons are composite particles made up of quarks and gluons. The gluons carry the strong force, which enables the quarks to stick together and binds them into a single particle. The main fodder for the LHC are hadrons called protons. Protons are made up of three quarks and an indefinable number of gluons. (Protons in turn make up atoms, which are the building blocks of everything around us.)

If a proton were enlarged to the size of a basketball, it would look empty. Just like atoms, protons are mostly empty space. The individual quarks and gluons inside are known to be extremely small, less than 1/10,000th the size of the entire proton.

“The inside of a proton would look like the atmosphere around you,” says Richard Ruiz, a theorist at Durham University. “It’s a mixture of empty space and microscopic particles that, for all intents and purposes, have no physical volume.

“But if you put those particles inside a balloon, you’ll see the balloon expand. Even though the internal particles are microscopic, they interact with each other and exert a force on their surroundings, inevitably producing something which does have an observable volume.”

So how do you collide two objects that are effectively empty space? You can’t. But luckily, you don’t need a classical collision to unleash a particle’s full potential.

In particle physics, the term “collide” can mean that two protons glide through each other, and their fundamental components pass so close together that they can talk to each other. If their voices are loud enough and resonate in just the right way, they can pluck deep hidden fields that will sing their own tune in response—by producing new particles.

“It’s a lot like music,” Ruiz says. “The entire universe is a symphony of complex harmonies which call and respond to each other. We can easily produce the mid-range tones, which would be like photons and muons, but some of these notes are so high that they require a huge amount of energy and very precise conditions to resonate.”

Space is permeated with dormant fields that can briefly pop a particle into existence when vibrated with the right amount of energy. These fields play important roles but almost always work behind the scenes. The Higgs field, for instance, is always interacting with other particles to help them gain mass. But a Higgs particle will only appear if the field is plucked with the right resonance.

This subatomic symbiosis is facilitated by the LHC and recorded by the experiment, but it’s not restricted to the laboratory environment; particles are also accelerated by cosmic sources such as supernova remnants. “This happens everywhere in the universe,” Ruiz says. “The LHC and its experiments are not special in that sense. They’re more like a big concert hall that provides the energy to pop open and record the symphony inside each proton.”