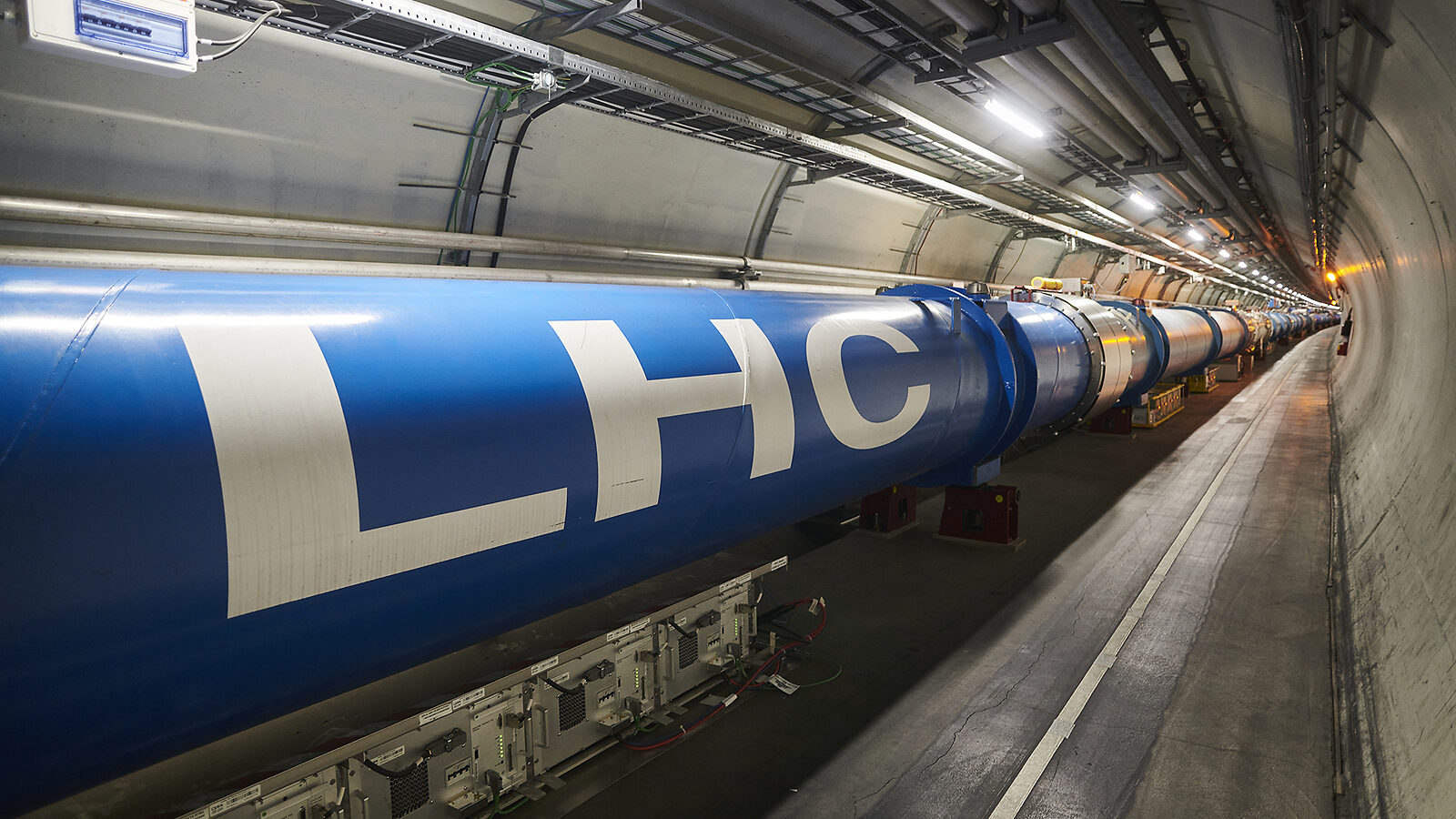 The LHC has been shut down since 2018, but that doesn’t mean scientists have been on break. Physicists, engineers and technicians have been upgrading both the accelerator and the detectors to make the next run of the LHC—starting today and scheduled to last until the end of 2025—the most powerful yet.

With these upgraded capabilities, scientists plan to collect more data during LHC Run 3 than they did in the first two runs combined. This will allow them to search for rare phenomena and to tackle questions such as how the Higgs boson interacts with itself. 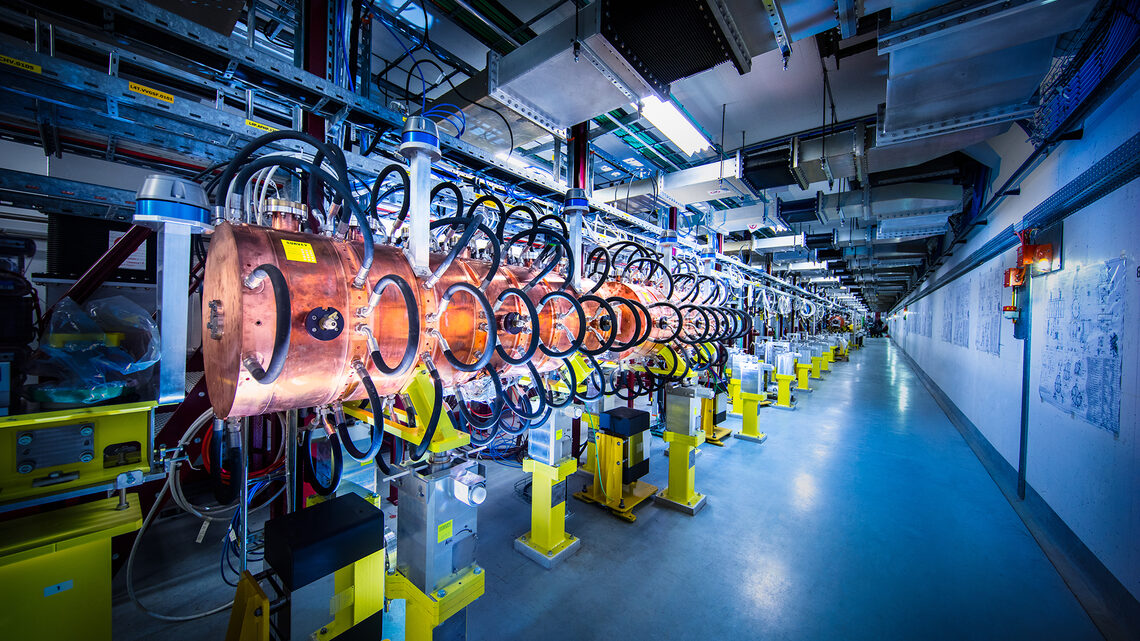 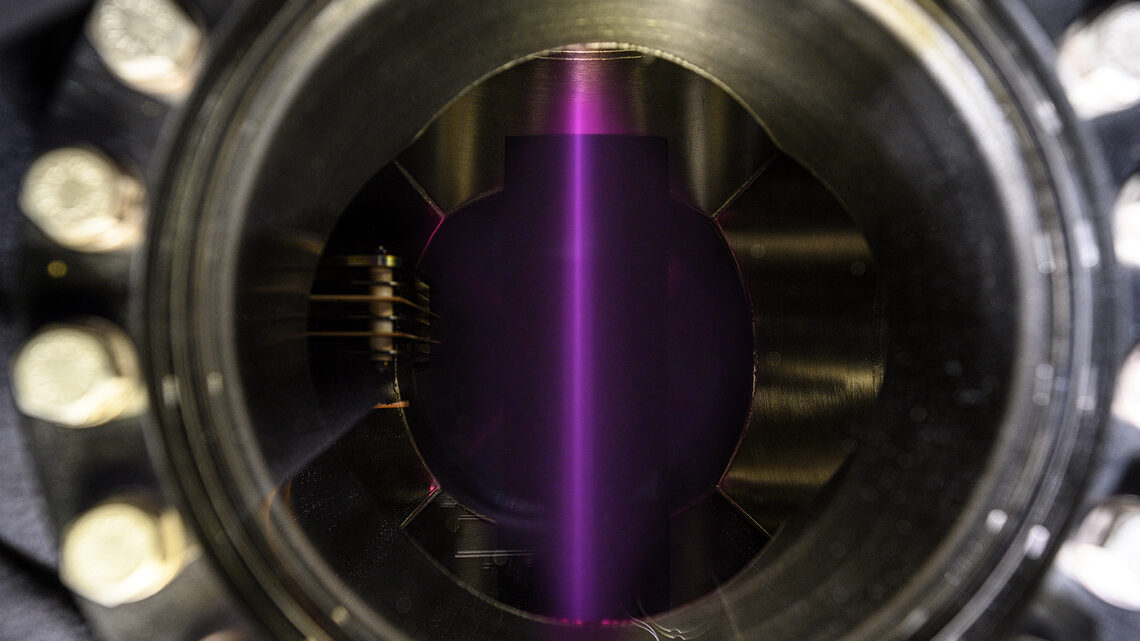 Perhaps the biggest change is that CERN’s accelerator complex will no longer be fed protons, but negatively charged hydrogen ions, each made up of a proton and two electrons. As the ions are injected, the electrons will be stripped off, leaving just the protons. These protons will be joined by more negatively charged hydrogen ions, which will undergo the same process. By repeatedly interweaving negative and positive ions, scientists can create tightly packed bunches of protons. A more compact proton beam will mean more particle collisions per second. 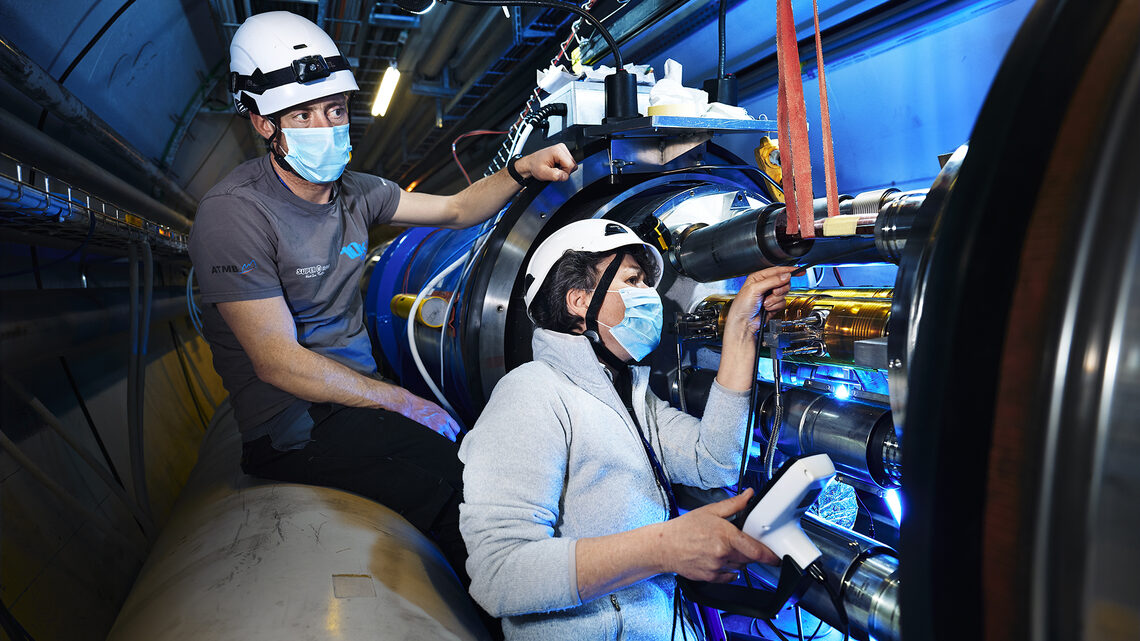 Opening interconnection on magnet in the LHC tunnel

A big upgrade for the LHC itself is planned for the next long shutdown, with the commissioning planned for 2029. During that long shutdown, the LHC will be converted into the High-Luminosity LHC, which will have a collision rate five times greater than the LHC’s original design. But the LHC also underwent some upgrades during this shutdown to prepare it for the more intense beam. 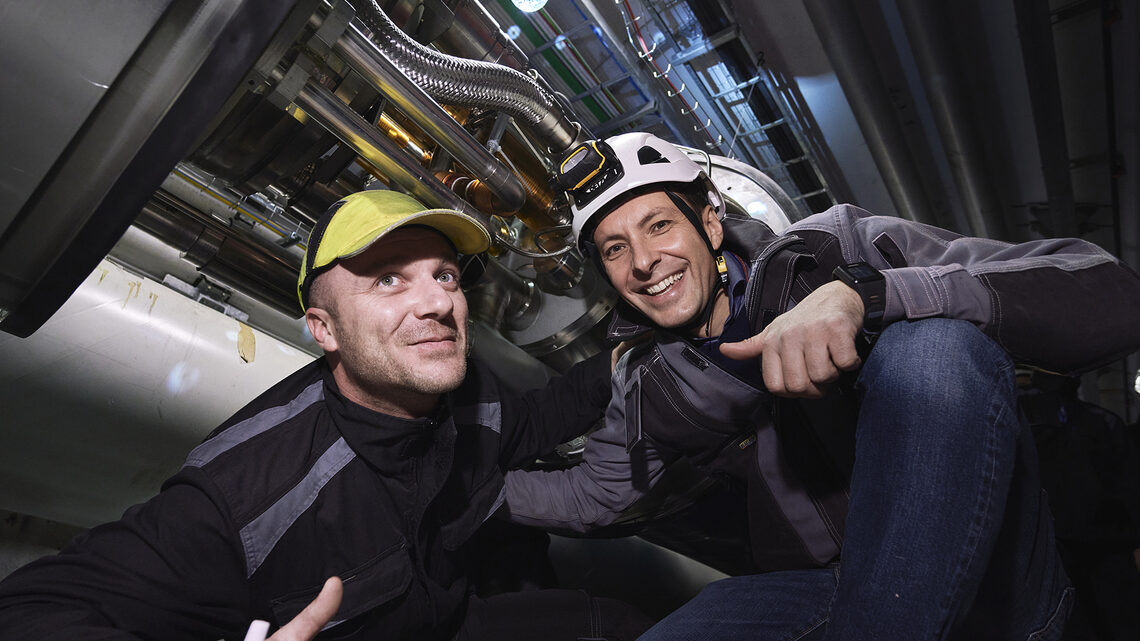 Scientists are especially excited about two new features: The first is a 4.5% increase in energy—from 13 TeV to 13.6 TeV—which will give scientists a boost in their searches for new physics and rare phenomena. The second is a 50% increase in the collision rate combined with luminosity leveling, a process in which the crossing angles and size of the beam are continually adjusted to maintain a steady stream of collisions for around 10 to 15 hours. 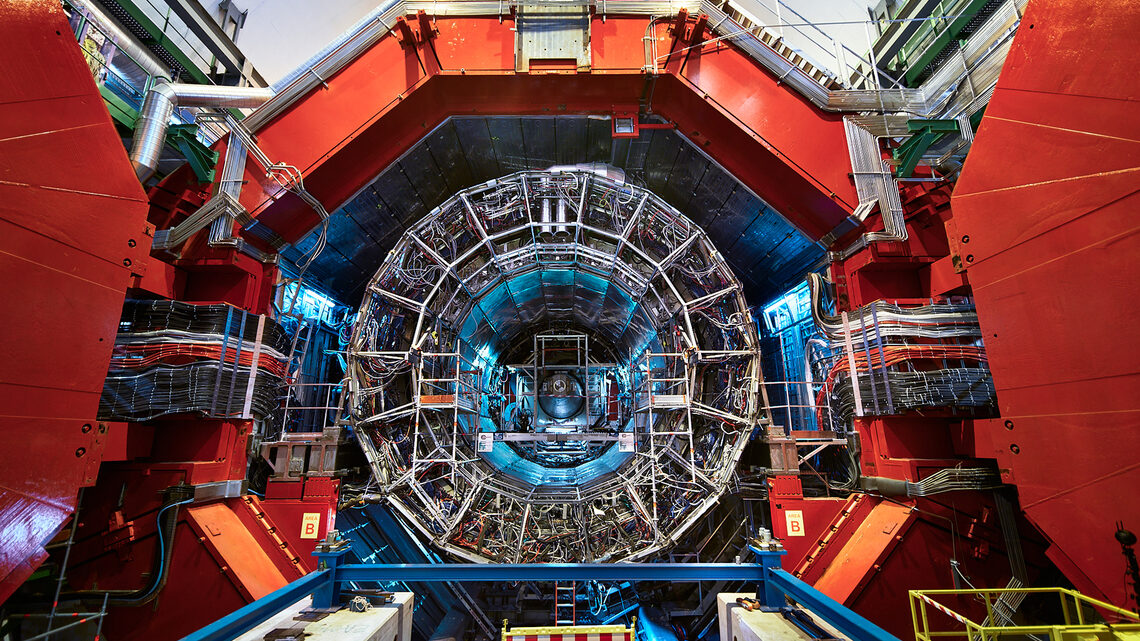 ALICE detector during the installation of the time-projection chamber

Scientists use the ALICE detector to study the hot, dense liquid that filled the universe immediately after the Big Bang. Their goal is to understand the properties of this primordial soup, called a quark gluon plasma, and how it cooled into all the ordinary matter we see today.

ALICE had some of the most major experimental upgrades during the long shutdown. These upgrades will not only prepare ALICE for LHC Run 3, but also for the planned HL-LHC. 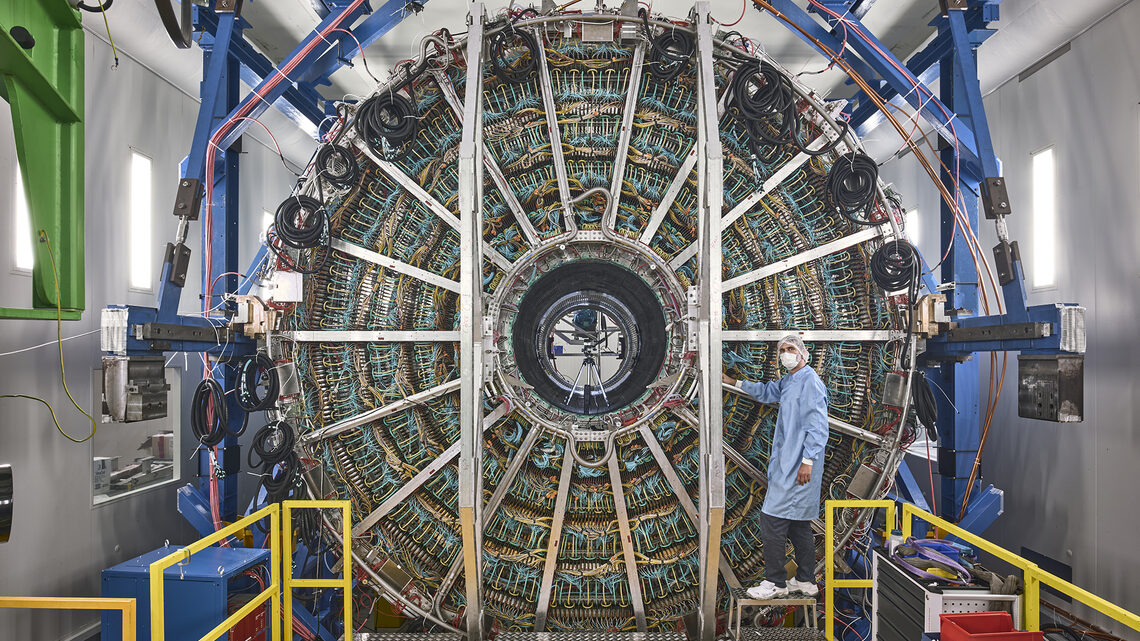 A major renovation was the replacement of ALICE’s time-projection chamber. A time-projection chamber is a gas-filled particle detector that uses electric and magnetic fields to affect the path of particles. Judging by how the particles move, scientists can then reconstruct their trajectory, momenta and properties. The new ALICE TPC, which is based on nine years’ worth of R&D, is projected to accumulate 50 times more heavy-ion collision data in the upcoming LHC Run 3 than in Runs 1 and 2 combined. 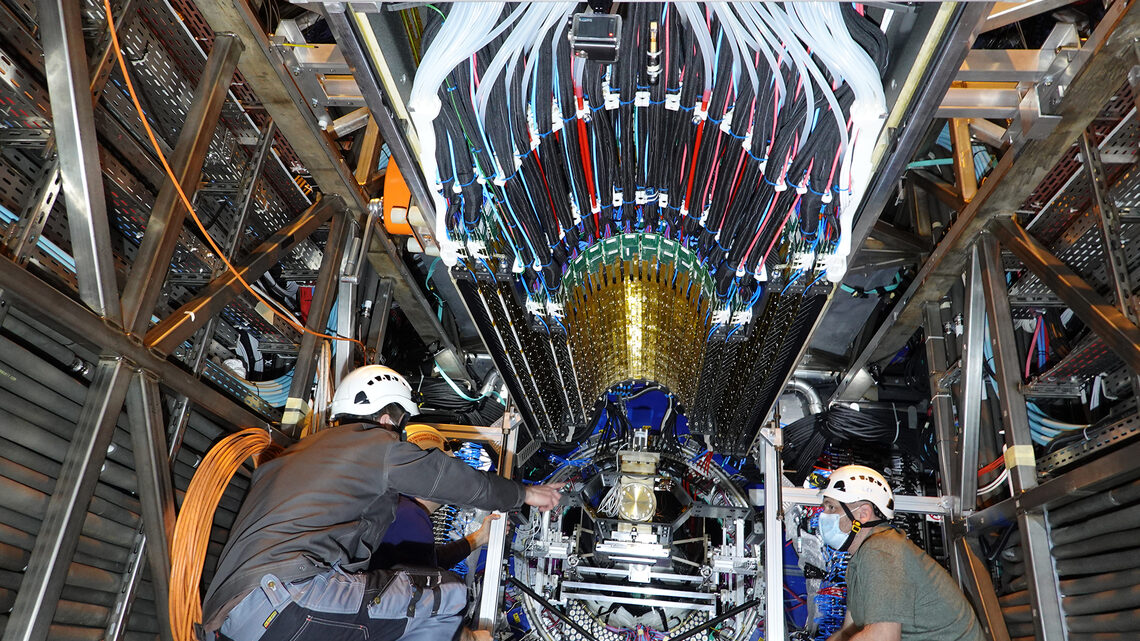 ALICE scientists also designed, built and installed a new inner tracking system, a detector that sits close to the point where particles collide. ALICE’s inner tracking system is made from silicon wafers, the same type of sensor material used to make digital cameras. The new detector will significantly increase the resolution of the “pictures” ALICE takes of particle collisions. It has a surface area of 10 square meters, making it the largest pixel detector ever built. 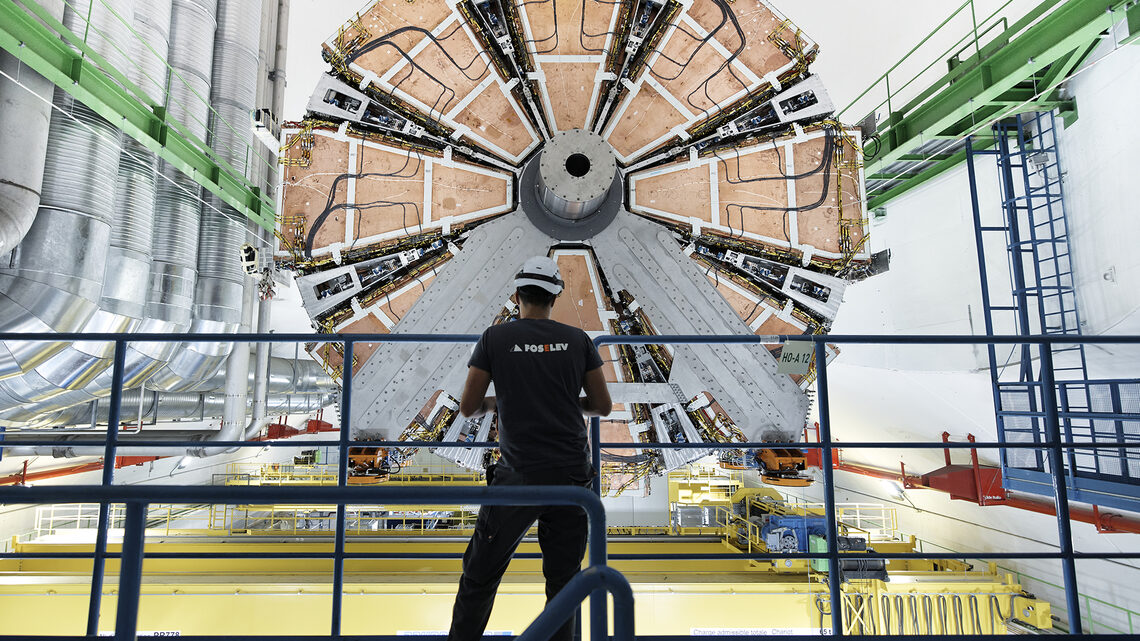 ATLAS is one of the two general-purpose experiments at the LHC. Measuring 46 meters (150 feet) long and 25 meters (82 feet) in diameter, it is also the largest detector ever constructed for use in a particle collider.

ATLAS was designed to study the laws of physics and search for new phenomena. After co-discovering the Higgs boson along with the CMS experiment in 2012, ATLAS is now studying the properties of the Higgs and looking for physics beyond the Standard Model, the best model physicists have of the subatomic world. 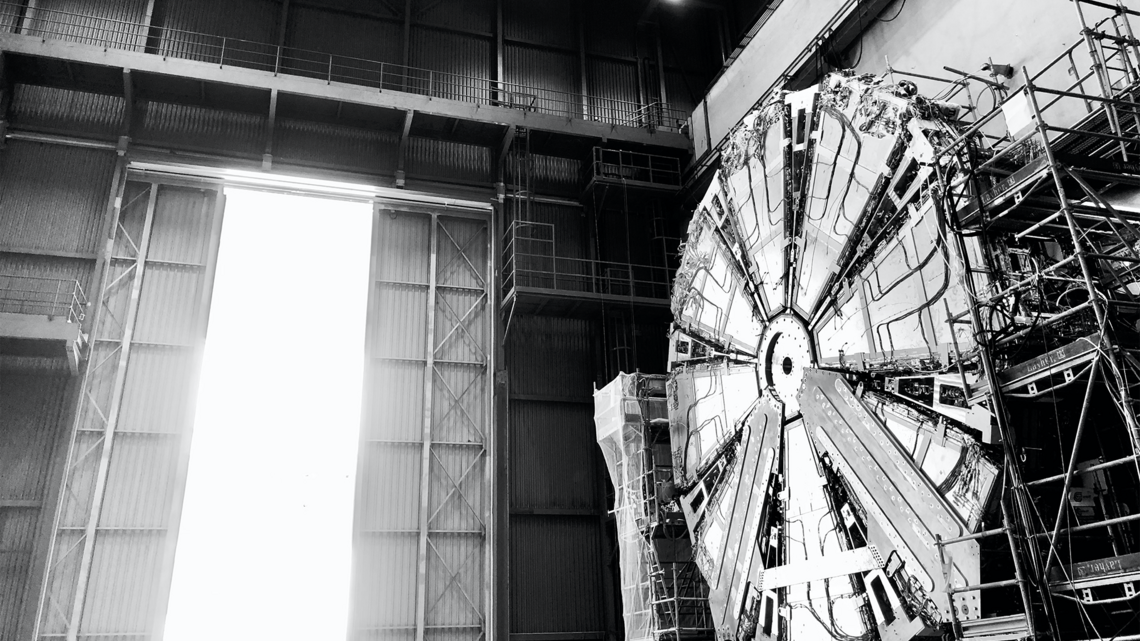 A major renovation at ATLAS during the long shutdown was the replacement of its two Small Wheels. The Small Wheels are detectors designed to catch muons—heavier cousins of electrons. Even though “small” is part of their name, each wheel is 9 meters in diameter (almost 30 feet). These wheels hold 16 wedge-shaped detector slices (which in turn, consist of 16 detecting layers each). The aptly named New Small Wheels will help ATLAS measure the momenta and trajectories of muons created during the high energy collisions inside the LHC 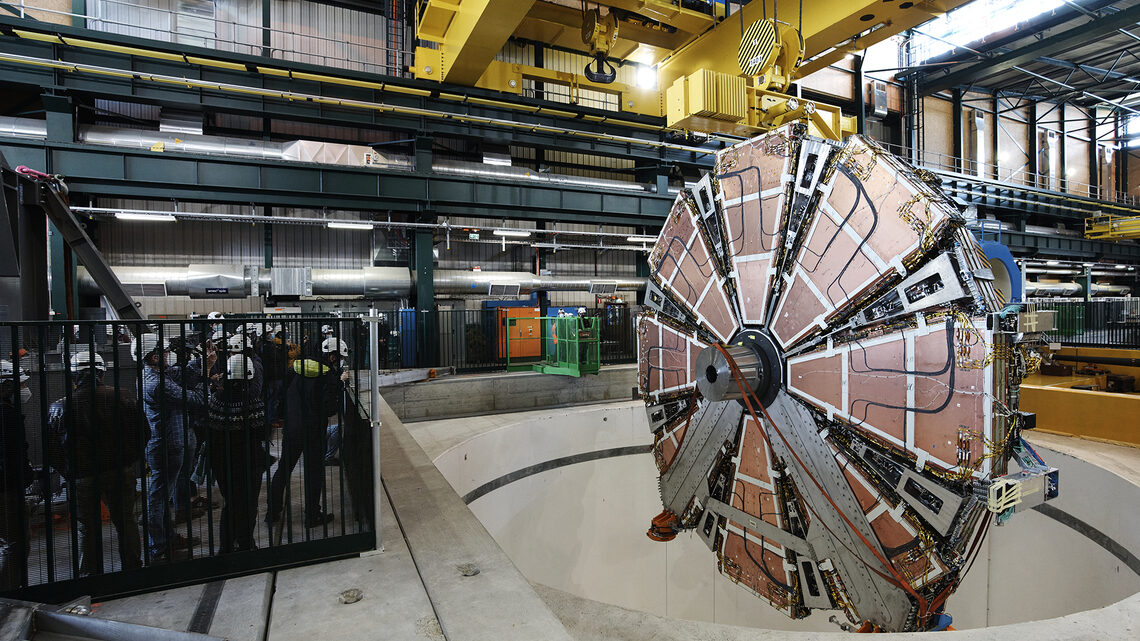 ATLAS scientists have also updated their detector’s trigger system—which is responsible for quickly filtering the data coming off the detector—and the software that processes, reconstructs and analyzes the data. 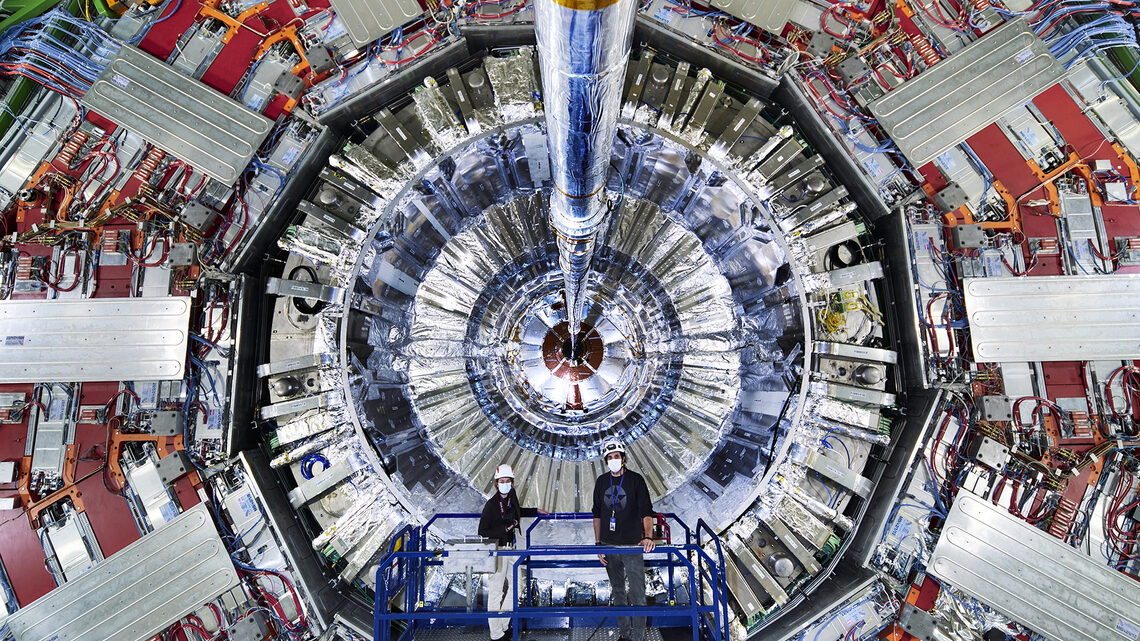 CMS is the other general-purpose experiment at the LHC. It is also the heaviest detector at CERN, weighing about 14,000 metric tons (about 15,400 tons).

CMS was designed to investigate the laws of physics at subatomic scales. After co-discovering the Higgs boson along with the ATLAS experiment in 2012, CMS is now studying the properties of the Higgs and looking for new physics and rare phenomena. 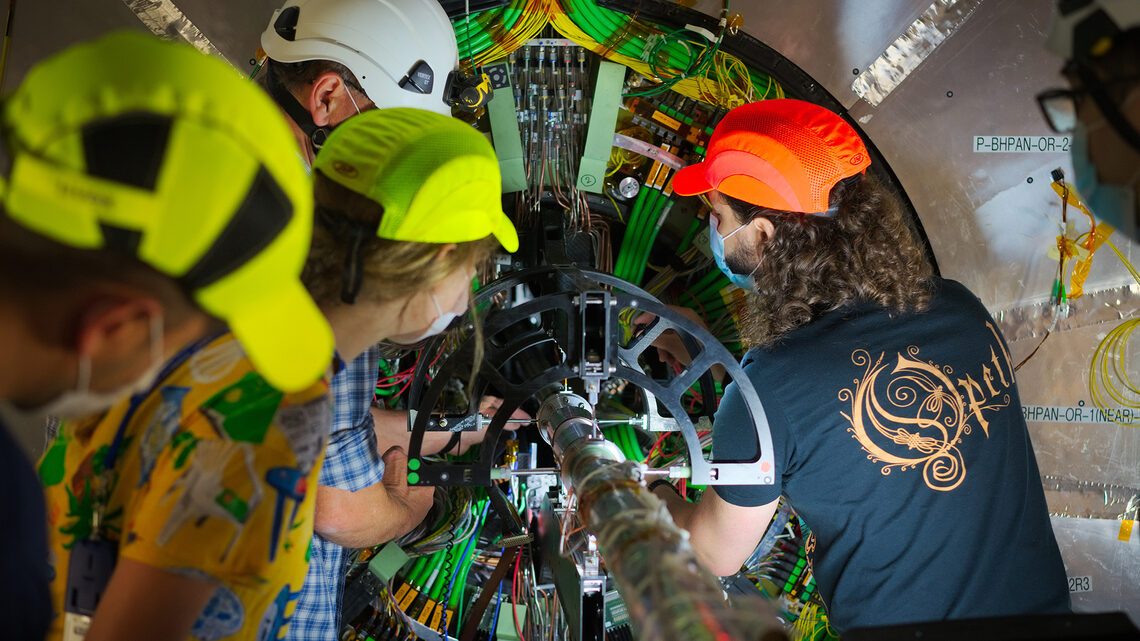 During the long shutdown, CMS scientists refurbished the pixel tracker, which sits a mere 2.9 centimeters away from the beam pipe, where particles circulate and collide. Around 600 million particles pass through 1 square centimeter of this inner detector every second. To keep track of the number of particles, scientists upgraded a detector close to the pixel tracker called BRIL, which will monitor the experimental conditions and help scientists calibrate their data. 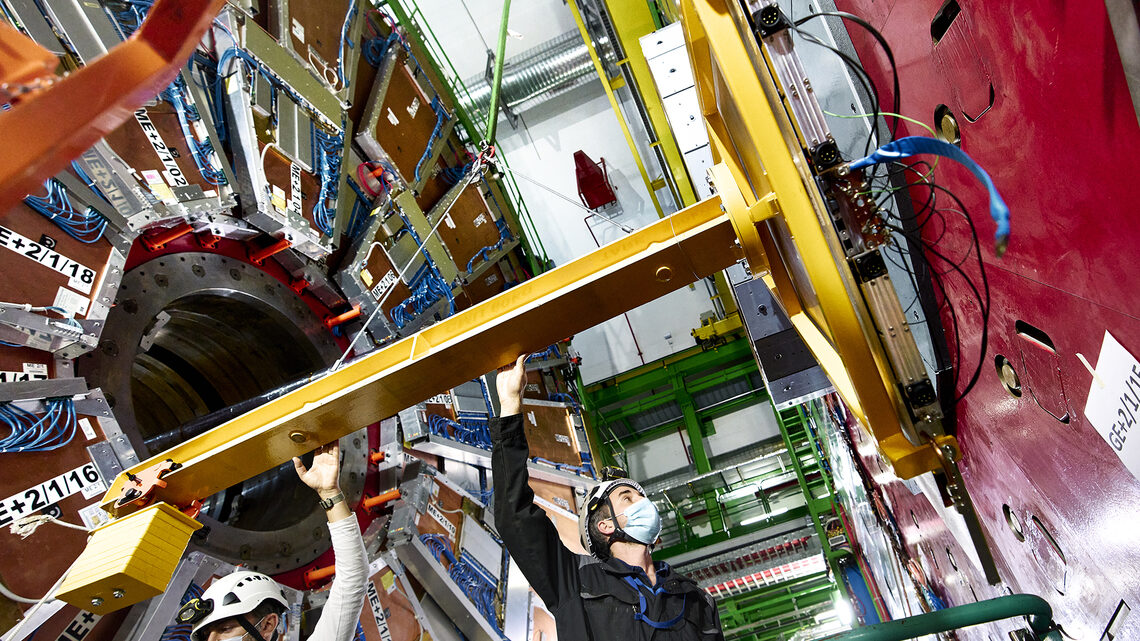 The CMS experiment also completed the installation of their newly designed Gas Electron Multiplier detectors, which will detect muons close to the beam pipe. In addition, CMS scientists have implemented new software to help the experiment quickly filter and process their data. 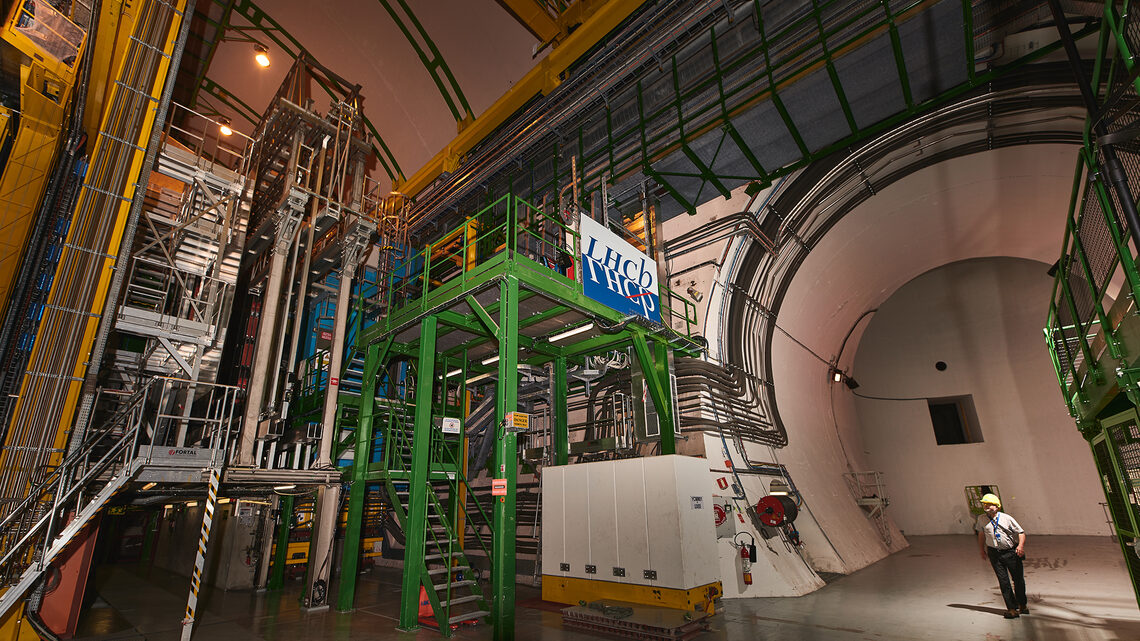 Along with ALICE, LHCb had some of the most major experimental upgrades during the long shutdown.

The LHCb experiment specializes in studying the properties of composite particles containing bottom quarks (hence the “b” in the name of the experiment). Scientists’ goal is to find deviations from the Standard Model that could help explain big mysteries in physics, such as the imbalance between matter and antimatter in the universe. 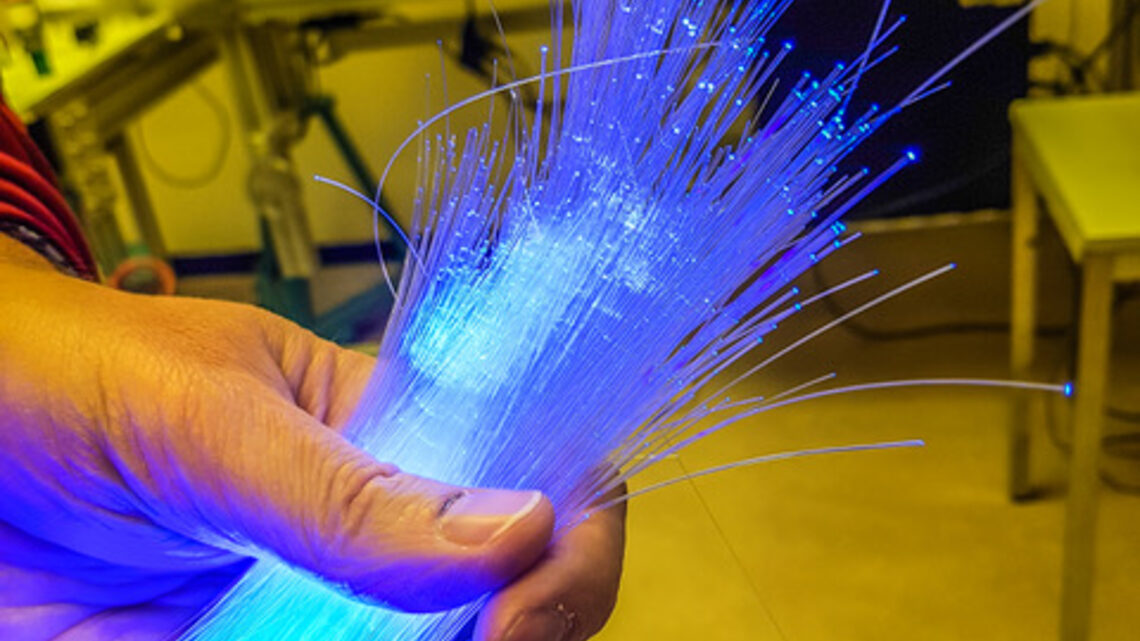 Scientists installed a new detector called SciFi, made from 10,000 kilometers (more than 6,200 miles) of optical fiber, a type of material that emits light when a particle interacts with it. 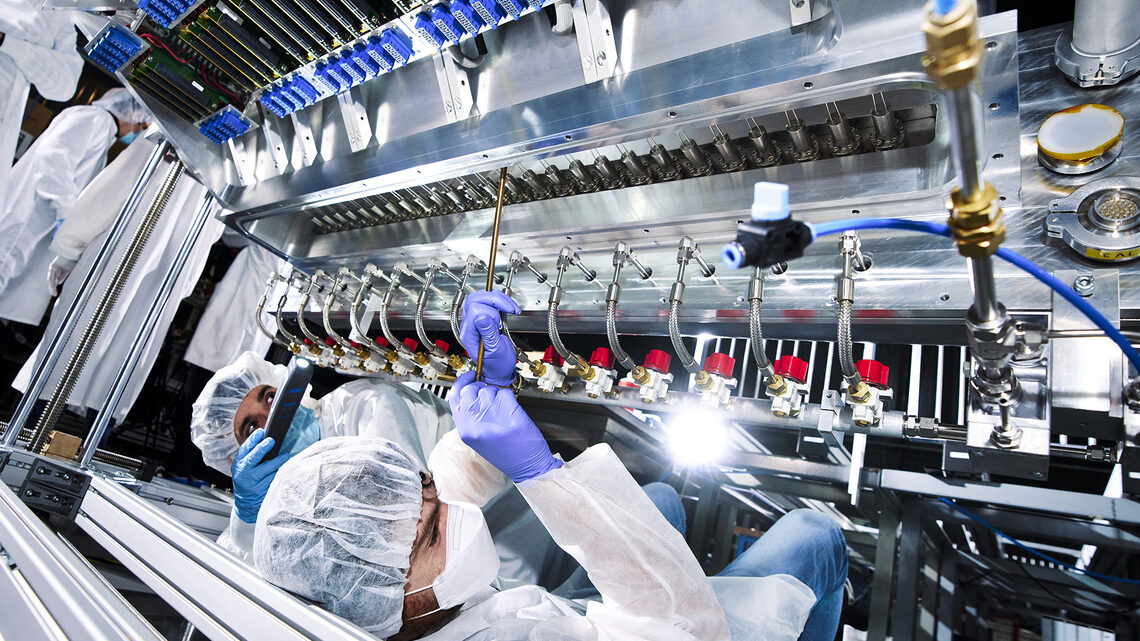 They also installed a new and faster Vertex Locator (VELO), a detector that will sit as close as possible to where the particles collide. What makes the new VELO detector unique is that scientists can lift it out of the way as they prepare the particle beams for collisions, then move it mechanically into place when LHCb is ready to collect data. This will allow scientists to capture clear information from the first particles that radiate from the collisions without unnecessary wear and tear from the beam.

In addition, LHCb scientists have implemented a new data-acquisition system, which will allow them to more quickly and precisely reconstruct what transpired during particle collisions.