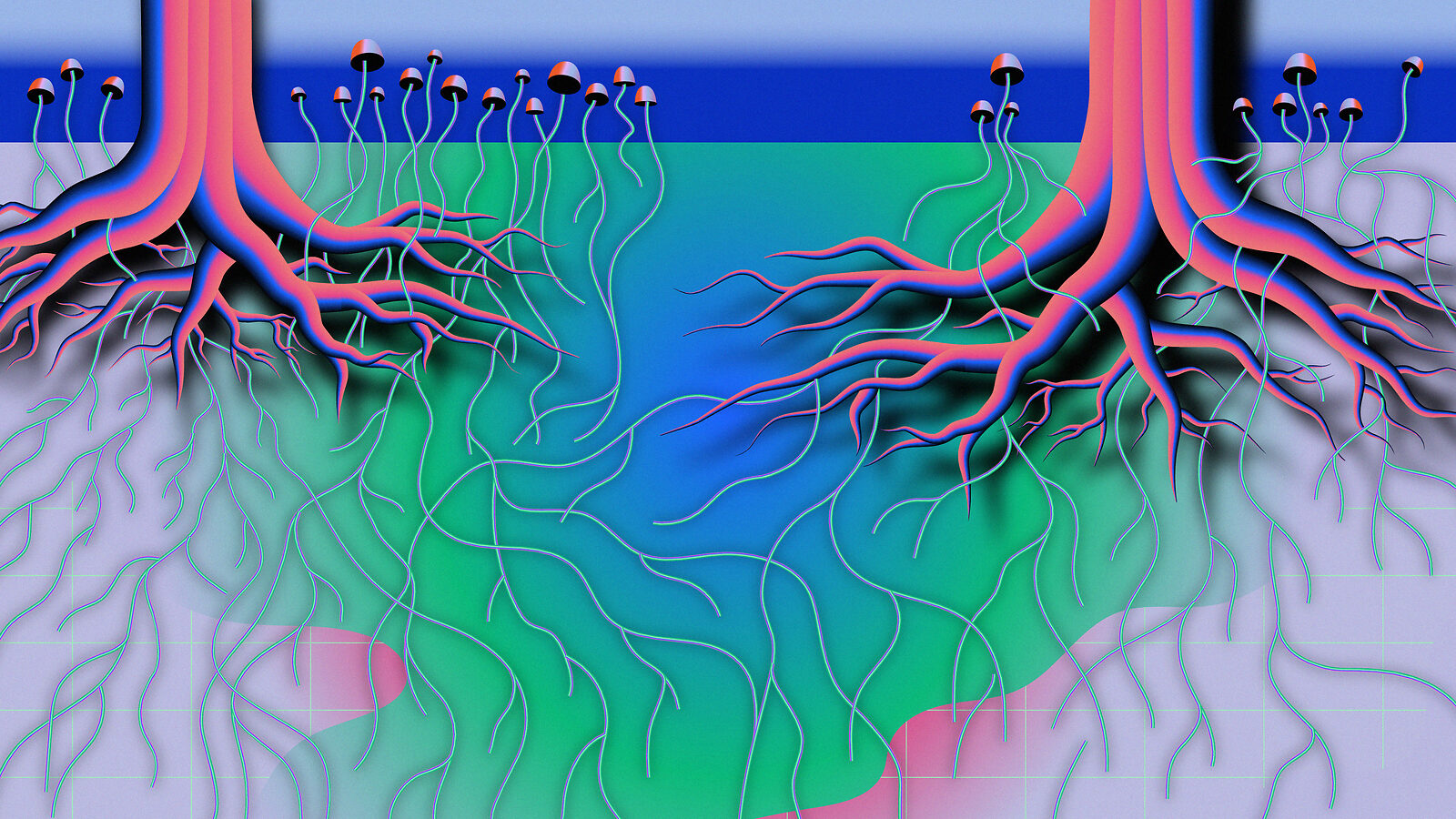 What is a quantum network?

Four years, four months, and twelve days ago, a photon—a particle of light—left Proxima Centauri, the closest star to us. Just now, it finally arrived at Earth.

This photon, and others that have come with it, could reveal incredible secrets about the planets that orbit the red dwarf star—such as if they’re habitable, or even inhabited. However, with current instruments, we’re not able to tease out this information.

That could one day change with technology called quantum networks.

“A key challenge for quantum networks is being able to interface between many different types of quantum systems and whatever you choose to be the network.”

Quantum networks don’t exist—and many scientists in the field will tell you they’re a long way off. But when they arrive, they could revolutionize everyday life, making unhackable communications secured for banking, medicine, navigation and more. We might not be there yet, but already scientists are testing the building blocks and putting together prototype systems.

“There are breakthroughs happening all the time,” says Sophia Economou, a physics professor and quantum information expert at Virginia Tech.

1. Quantum networks are possible because of the weird world of quantum mechanics.

Understanding these phenomena requires stepping out of your daily experience of how the world works.

For example, classical computer bits are either 1 or 0—like a coin flipped heads or tails or a computer’s electrical signal switched on or off. The quantum realm, though, isn’t so decisive. Qubits, which are typically photons or electrons, can be 1 or 0. But they can also simultaneously be a 1 and 0. They’re more like spinning coins, which are undecidedly both heads and tails. Only once qubits are measured do they snap into a 1 or a 0 state. This duality is called superposition, and it allows for faster completion of some computing processes.

Furthermore, computing with qubits is more secure than with classical bits, thanks to a phenomenon known as entanglement. As described by Panagiotis Spentzouris, a scientist at the US Department of Energy’s Fermi National Accelerator Laboratory, “entanglement is one of the coolest and most intriguing aspects of quantum physics.”

Entanglement allows two qubits to become inextricably interlinked, no matter how much space separates them. Once entangled, two qubits can mirror one another, each fully correlated with the measurement of the other. If one qubit is switched to a 0, so will its correlated partner.

Imagine you wanted to send a secure message to a friend connected via a quantum network.

With a quantum network, you could send an entangled qubit to them and keep the other one for yourself. Measuring the state of the qubit would provide a key that you could use to encrypt a message sent through a non-quantum channel. Your friend’s qubit, entangled with and thus fully correlated to your qubit, would function as the key to unencrypting the received message.

An unread quantum state can’t be copied. If a spy intercepted the qubit to steal the encryption, the qubit’s state would be interrupted, leaving a clue someone was eavesdropping.

These types of quantum-encoded messages are already being sent. Quantum key distribution has been used for bank transfers and secure ballot result transmissions. However, this type of communication is currently practical only at short, city-scale distances.

That’s because quantum information is delicate. Qubits are typically sent as photons using the same standard fiber-optic cables that carry the bulk of the internet. The slightest bump against the wall of a fiber optic cable, a passing photon of sunlight, and even a tiny mismatch in distances traveled can all lead to two qubits falling out of entanglement.

Sending information halfway around the world is much harder with quantum networks than with classical networks. In classical networks, amplifiers placed periodically along the line reemit signals, splitting a marathon into a relay race. Quantum networks can’t use amplifiers, though, because reading and reemitting qubits would disrupt their entanglement, ruining the transmission.

Researchers are instead working on building quantum repeaters, which would be able to pass along the information without having to read the qubits. To do this, quantum repeaters would create multiple entangled pairs of qubits that would link together to form a giant entangled chain—something known as entanglement swapping. Instead of a relay race, this is more like a game of “Simon Says”, where each qubit mirrors its neighbor. The system retains its security because, just as with entanglement, if an outsider tried to copy the information, the qubits' state would be interrupted, revealing the snooper.

While conceptually simple, it is incredibly hard to implement.

“Some people have demonstrated designs that would in principle be a quantum repeater, but there aren't any deployed in a real network,” says Emilio Nanni, an assistant professor at Stanford University and SLAC National Accelerator Laboratory.

Right now, researchers are largely focusing on developing metropolitan-scale networks, which are small enough to avoid needing quantum repeaters. Spentzouris is one such researcher. He’s creating a Chicago-wide network to test network infrastructure, like entanglement swapping, which can already be done with nodes that do not use quantum repeaters. He hopes such steps will help quantum networks be ready to expand when repeaters are available.

Other groups around the world, such as those at Delft University of Technology in the Netherlands and University of Science and Technology of China, have demonstrated longer network-like connections, including linking multiple quantum devices, entanglement over a dozen or more qubits, and using quantum teleportation over a thousand kilometers with satellite links, which suffer less loss than fiber optic cables. Though impressive, such demonstrations are still a long way from being true quantum networks.

In his lab, Nanni and his collaborators are working to create a computer chip that could connect classical computers to a quantum network. Such chips and other classical-quantum bridges could one day allow us to send bank transfers or information effortlessly and securely via quantum networking without needing personal quantum computers.

As researchers work toward more reliable networks, new prototypes and designs are being developed, with breakthroughs coming almost monthly. Most areas of research have designed multiple options with no clear winners.

For example, qubits can be encoded in a multitude of ways—using their polarization states, spin states, times of arrival, the motions of trapped ions and atoms, and the states of superconductors. Some designs work incredibly well but only at supercooled temperatures, while others are compatible at room temperatures but are less reliable. Likely, future quantum networks will exist as a mash-up of such options, with different designs specialized for different applications.

“A key challenge for quantum networks is being able to interface between many different types of quantum systems and whatever you choose to be the network,” Nanni says. “I strongly suspect that in the long run we will not really settle on just one type of device because different types of platforms have different inherent advantages.”

4. Quantum networks will be important in scientific sensing first.

It may be decades before the average person has contact with a quantum network. But their applications in science may be a lot more imminent.

Scientists already achieved something similar, in 2019, when they used the Event Horizon Telescope to create the first-ever image of a black hole. The EHT was not a single telescope, but rather a network of radio telescopes located around the world. Similarly, the GRAVITY instrument on ESO’s Very Large Telescope Interferometer, which consists of telescopes spread along a small hilltop, used optical interferometry to image a planet around another star in the same year.

The next step is to combine optical telescopes spaced even farther apart, which would improve image resolution further. This could lead to ground-breaking discoveries about the habitability of nearby planets, dark matter and the expansion of the universe.

“Such a resolution [that could be achieved with optical interferometers] is enough to see an area like New York City on a planet in the closest star system,” says Emil Khabiboulline, a PhD student at Harvard, who published a paper describing one possible way to connect telescopes with quantum networks.

Increasing the distance between optical telescopes, however, is a big challenge. Photons are inevitably lost during the journey to a central hub where they’re recombined, and longer distances mean more data lost.

Quantum networks offer one solution to this problem. If the photons’ quantum information can be recorded at each telescope and passed in a network, it could massively reduce data loss. But the huge number of photons possibly amassed by an optical telescope would overwhelm the bandwidth of quantum networks as they’re now envisioned.

One workaround is a quantum approach, proposed by Khabiboulline and others, that could compress and store the photons’ quantum information before sending it over a quantum network using a smaller number of qubits. Other groups, like researchers at the University of Sydney, have proposed using quantum hard drives, devices that would store the quantum information of photons arriving at separate telescopes until they could be physically brought together and recombined.

Regardless of the final approach, the advances first designed by astronomers and other scientists will likely trickle down into the quantum networks the public may someday use.

“I think with a level of enthusiasm that is present in the scientific community now, over the next decade, we’re going to really make a big impact,” Nanni says.