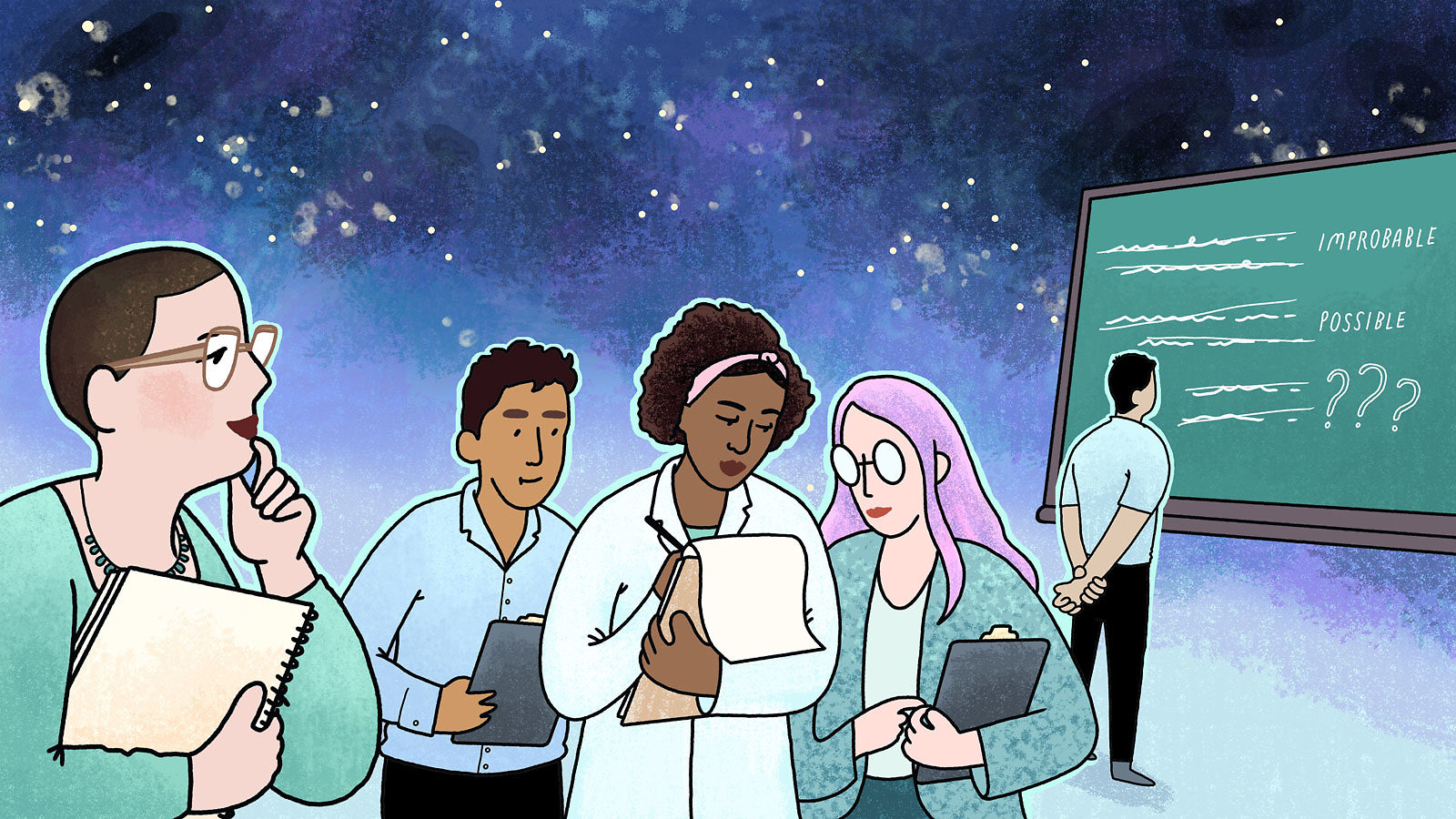 For a recent YouTube video, a theorist with a postdoctoral fellowship at CERN named Dorota Grabowska discussed dark matter with popular science figure Dianna Cowern (more commonly known as Physics Girl). Below the video, a viewer typed the comment, “Dark Matter is science speak for ‘we don’t have a clue.’”

Grabowska says she was surprised at the number of commenters who seemed to believe physicists knew nothing about the subject.

“They were saying, ‘Oh, it's just a miscounting of space dust’ or, ‘We really just don’t understand magnetism,’” Grabowska says. “People weren't realizing the steps that physicists go through to actually test a hypothesis and say, ‘This doesn't work; let's think differently.’” 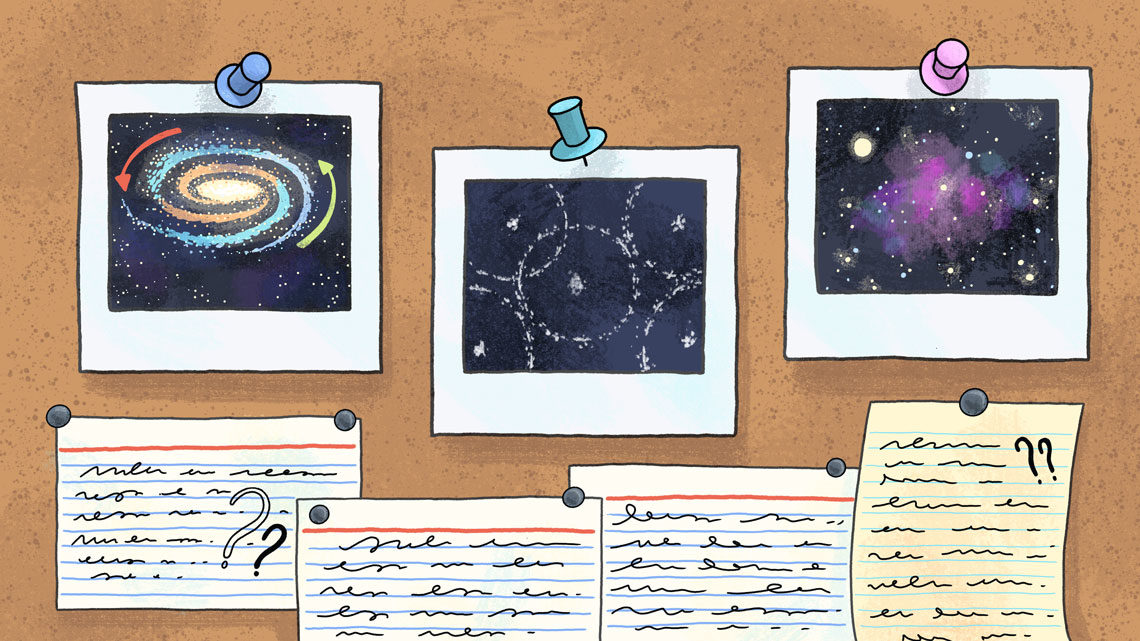 The birth of a dark matter theory

Science hypotheses often come from an abnormal observation—something that appears unexpectedly or acts in an unexpected way. Three commonly cited unusual astrophysical observations credited to dark matter are abnormal galaxy rotation speeds, patterns in the large-scale structure of the universe, and the Bullet Cluster.

Based on the visible matter in galaxies, physicists can use the laws of gravity to predict how quickly stars revolve around galaxies. The prediction was that matter closest to the center of a galaxy would move the fastest, with matter farther from the center feeling less of the pull of gravity and moving more slowly.

However, astronomers first noticed in the early 20th century that the opposite was happening: The matter in the outer regions of galaxies was moving much faster than expected. Finding these abnormal dynamics was one of the first hints that we might be missing something. If invisible matter makes up much of the mass of a galaxy, then the faster-than-expected regions can be explained.

The hot early universe was in part made up of charged nuclei and electrons. Photons could drag on these particles, preventing growth. But dark matter was immune to this interaction and, with the help of gravity, began to form its own structures. When the universe cooled enough that atoms could form, these atoms (“baryons”) were pulled into the dark matter structures, falling into their gravitational potential wells. This has left a signature in the sky called baryon acoustic oscillations, reminiscent of the ripples of a stone splashing into water.

Comparing the predictions of a dark matter theory to observational data from these oscillations, called BAOs, and the overall shape of our universe’s “cosmic web” are necessary tests of the theory’s strength.

The Bullet Cluster is a cluster of galaxies created by a collision between two other galaxy clusters. The clusters interacted gravitationally, causing the matter in both to slow down as they passed through each other. The gas from each collided, heating up and creating a bright signal in X-rays.

But while there are two bright X-ray clusters of galaxies near the point of collision, a significant amount of mass is located in two dark "lobes" even farther from the center. It's like the galaxies collided, but some of their matter didn't care and kept going unimpeded. Dark matter seems to be passing through regular matter like a ghost.

The Bullet Cluster is considered a crucial piece of evidence for the existence of dark matter. It is famous for being the first galaxy merger to be deeply studied, but astronomers have since found many more galaxy mergers that show the same dark "lobe" structure.

To be viable, any theory of dark matter must adequately explain all three of these phenomena. “The baton gets passed from the astrophysical observers to the theorists, to the experimentalists,” Grabowska says.

Observers announce an unexpected phenomenon to theorists, who think of a possible explanation for it; experimentalists then devise a way to test that explanation through detection methods such as looking for a gravitational signature or a particle interaction. “It's this massively collaborative process where no one really has the one way to look at it. You need everyone to put the whole picture together.”

Scientists may not yet know what the explanation for these unusual astronomical observations is, but they do have some idea what it is not. 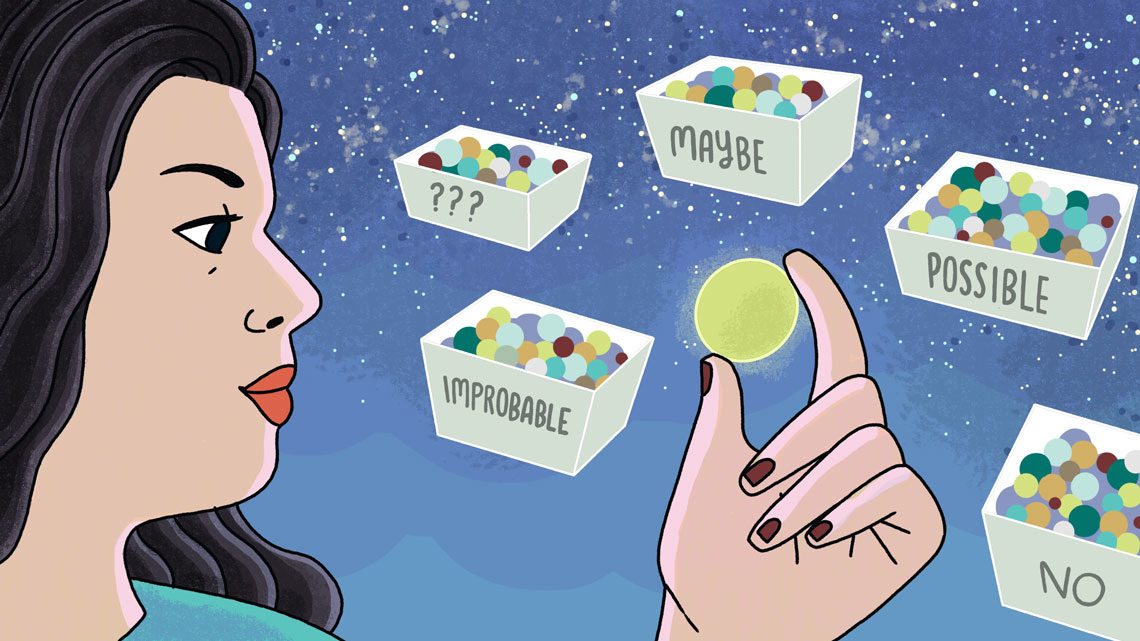 Disfavored: The theories that have fallen behind

Grabowska is careful to note that it’s difficult to completely throw away a theory of dark matter. The range of possible masses for a dark matter particle spans many orders of magnitude, all the way from the axion (its mass a tiny fraction of that of a proton) to stellar black holes (thousands of times more massive than the sun).

One thing physicists are sure of? They haven’t miscounted any mass.

Galaxy rotation curves could be explained if there were simply regular matter that observers didn’t measure or account for. Some theories posited that perhaps there was more regular mass out there, but it consisted of things like brown dwarfs, burnt-out stars, and small, ancient black holes that are too dim to see properly. Scientists posited that these massive compact halo objects (or “MACHOs”) could make up the missing matter.

But not only do MACHOs not explain other phenomena that point to the existence of dark matter, widespread searches for these objects have not found enough of them to represent all of dark matter.

Another set of dark matter theories that many scientists consider to have fallen short is modified Newtonian dynamics (or “MOND”). These theories propose a modification to Newton’s laws of motion that would apply only at very small accelerations, which would adequately explain the abnormal rotation speed of galaxies. But like MACHOs, these theories are inadequate to explain BAOs or the dynamics of larger-scale galaxy clusters. They also struggle to describe the Bullet Cluster.

Some of the strongest candidates for dark matter—which would explain abnormal galaxy rotation speeds, the Bullet Cluster, BAOs and the large-scale structure of the universe—are weakly interacting particles (or “WIMPs”). But so far, thorough, decades-long searches have not yet turned up any evidence for the existence of WIMP dark matter candidates; instead, they have set stricter and stricter limits on their possible properties.

The range of viable candidates for a dark matter particle is still vast. It includes axions, sterile neutrinos and WIMPs with rare interactions or extremely low masses.

Expanding the field even further is the possibility that there isn’t just one answer to dark matter: It could be a combination of different types of particles or objects, or there could be an entire “dark sector” of dark matter particles, like a mirror-universe version of the Standard Model.

Definitively disproving a dark matter theory or a specific dark matter candidate is challenging—when do you stop searching for a particle that could have nearly any mass? But the breadth of evidence for dark matter allows for very thorough vetting. A dark matter theory has so much to explain; and as experiments get more precise and telescopes get sharper, we may be able to cross a few more off our list.