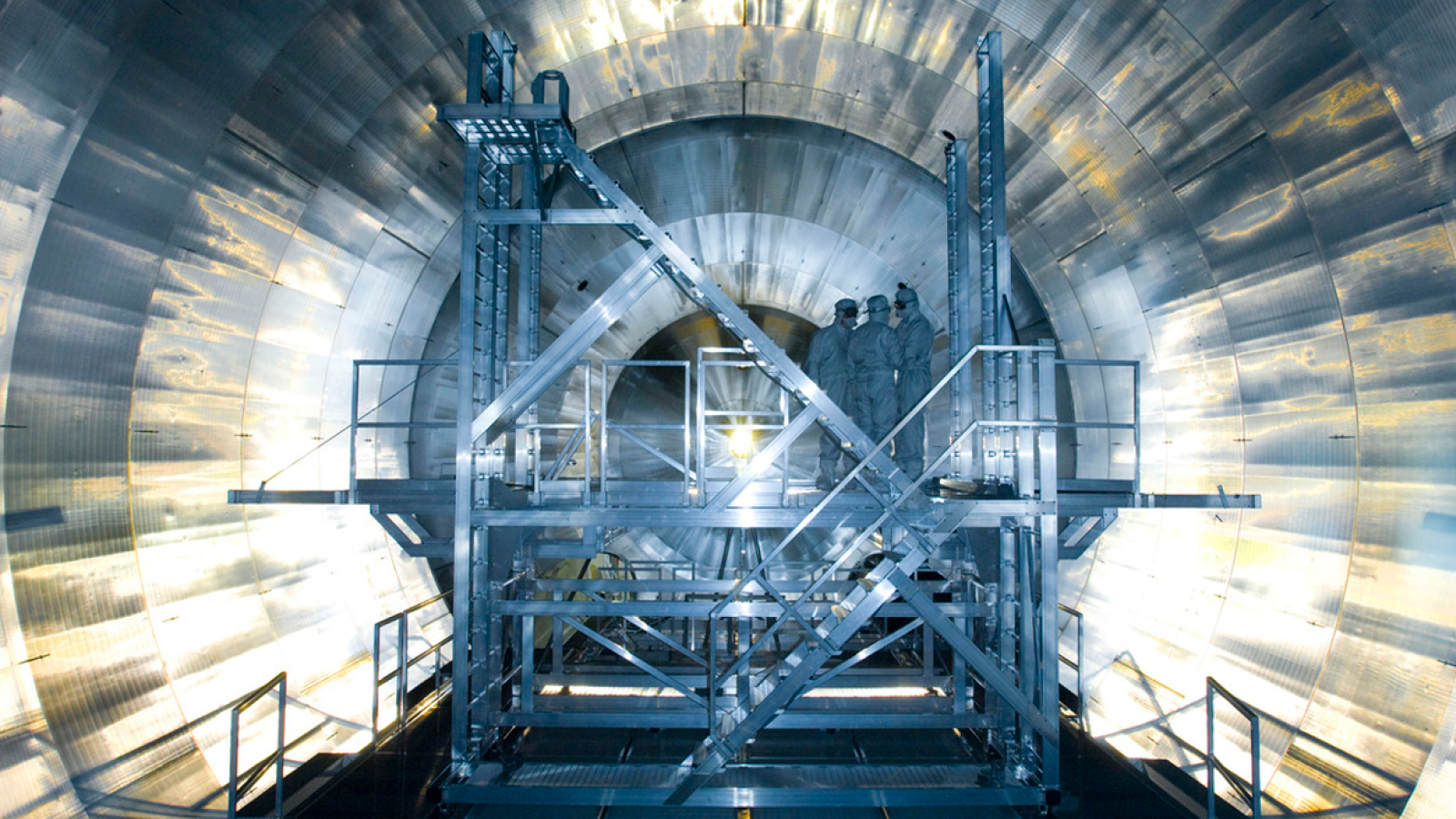 Neutrinos are everywhere. Every second, 100 trillion of them pass through your body unnoticed, hardly ever interacting. Though exceedingly abundant, they are the lightest particles of matter, and physicists around the world are attempting the difficult challenge of measuring their mass.

For a long time, physicists thought neutrinos were massless. This belief was overturned by the discovery that neutrinos oscillate between three flavors: electron, muon and tau. This happens because each flavor contains a mixture of three mass types, neutrino-1, neutrino-2 and neutrino-3, which travel at slightly different speeds.

According to the measurements taken so far, neutrinos must weigh less than 2 electronvolts (a minute fraction of the mass of the tiny electron, which weighs 511,000 electronvolts). A new generation of experiments is attempting to lower this limit—and possibly even identify the actual mass of this elusive particle.

Where did the energy go?

Neutrinos were first proposed by the Austrian-born theoretical physicist Wolfgang Pauli to resolve a problem with beta decay. In the process of beta decay, a neutron in an unstable nucleus transforms into a proton while emitting an electron. Something about this process was especially puzzling to scientists. During the decay, some energy seemed to go missing, breaking the well-established law of energy conservation.

Pauli suggested that the disappearing energy was slipping away in the form of another particle. This particle was later dubbed the neutrino, or “little neutral one,” by the Italian physicist Enrico Fermi.

Scientists are now applying the principle of energy conservation to direct neutrino mass experiments. By very precisely measuring the energy of electrons released during the decay of unstable atoms, physicists can deduce the mass of neutrinos.

“The heavier the neutrino is, the less energy is left over to be carried by the electron,” says Boris Kayser, a theoretical physicist at Fermilab. “So there is a maximum energy that an electron can have when a neutrino is emitted.”

These experiments are considered direct because they rely on fewer assumptions than other neutrino mass investigations. For example, physicists measure mass indirectly by observing neutrinos’ imprints on other visible things such as galaxy clustering.

Of the direct neutrino mass experiments, KATRIN, which is based at the Karlsrule Institute for Technology in Germany, is the closest to beginning its search.

“If everything works as planned, I think we'll have very beautiful results in 2017,” says Guido Drexlin, a physicist at KIT and co-spokesperson for KATRIN. 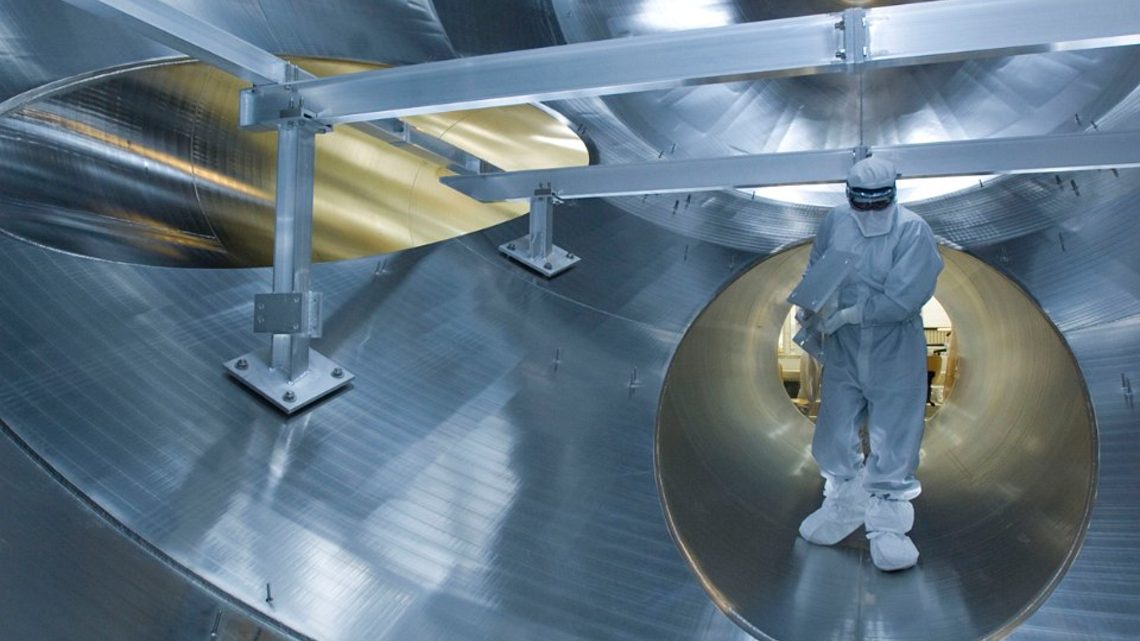 Cleanliness is key inside the main spectrometer.

KATRIN plans to measure the energy of the electrons released from the decay of the radioactive isotope tritium. It will do so by using a giant tank tuned to a precise voltage that allows only electrons above a specific energy to pass through to the detector at the other side. Physicists can use this information to plot the rate of decays at any given energy.

The mass of a neutrino will cause a disturbance in the shape of this graph. Each neutrino mass type should create its own kink. KATRIN, with a peak sensitivity of 0.2 electronvolts (a factor 100 better than previous experiments) will look for a “broad kink” that physicists can use to calculate average neutrino mass.

Another tritium experiment, Project 8, is attempting a completely different method to measure neutrino mass. The experimenters plan to detect the energy of each individual electron ejected from a beta decay by measuring the frequency of its spiraling motion in a magnetic field. Though still in the early stages, it has the potential to go beyond KATRIN’s sensitivity, giving physicists high hopes for its future.

“KATRIN is the furthest along—it will come out with guns blazing,” says Joseph Formaggio, a physicist at MIT and Project 8 co-spokesperson. “But if they see a signal, the first thing people are going to want to know is whether the kink they see is real. And we can come in and do another experiment with a completely different method.”

Others are looking for these telltale kinks using a completely different element, holmium, which decays through a process called electron capture. In these events, an electron in an unstable atom combines with a proton, turning it into a neutron while releasing a neutrino.

Physicists are measuring the very small amount of energy released in this decay by enclosing the holmium source in microscopic detectors that are operated at very low temperatures (typically below minus 459.2 degrees Fahrenheit). Each holmium decay leads to a tiny increase of the detector’s temperature (about 1/1000 degrees Fahrenheit).

“To lower the limit on the electron neutrino mass, you need a good thermometer that can measure these very small changes of temperature with high precision,” says Loredana Gastaldo, a Heidelberg University physicist and spokesperson for the ECHo experiment.

There are currently three holmium experiments, ECHo and HOLMES in Europe and NuMECs in the US, which are in various stages of testing their detectors and producing isotopes of holmium.

The holmium and tritium experiments will help lower the limit on how heavy neutrinos can be, but it may be that none will be able to definitively determine their mass. It will likely require a combination of both direct and indirect neutrino mass experiments to provide scientists with the answers they seek—or, physicists might even find completely unexpected results.