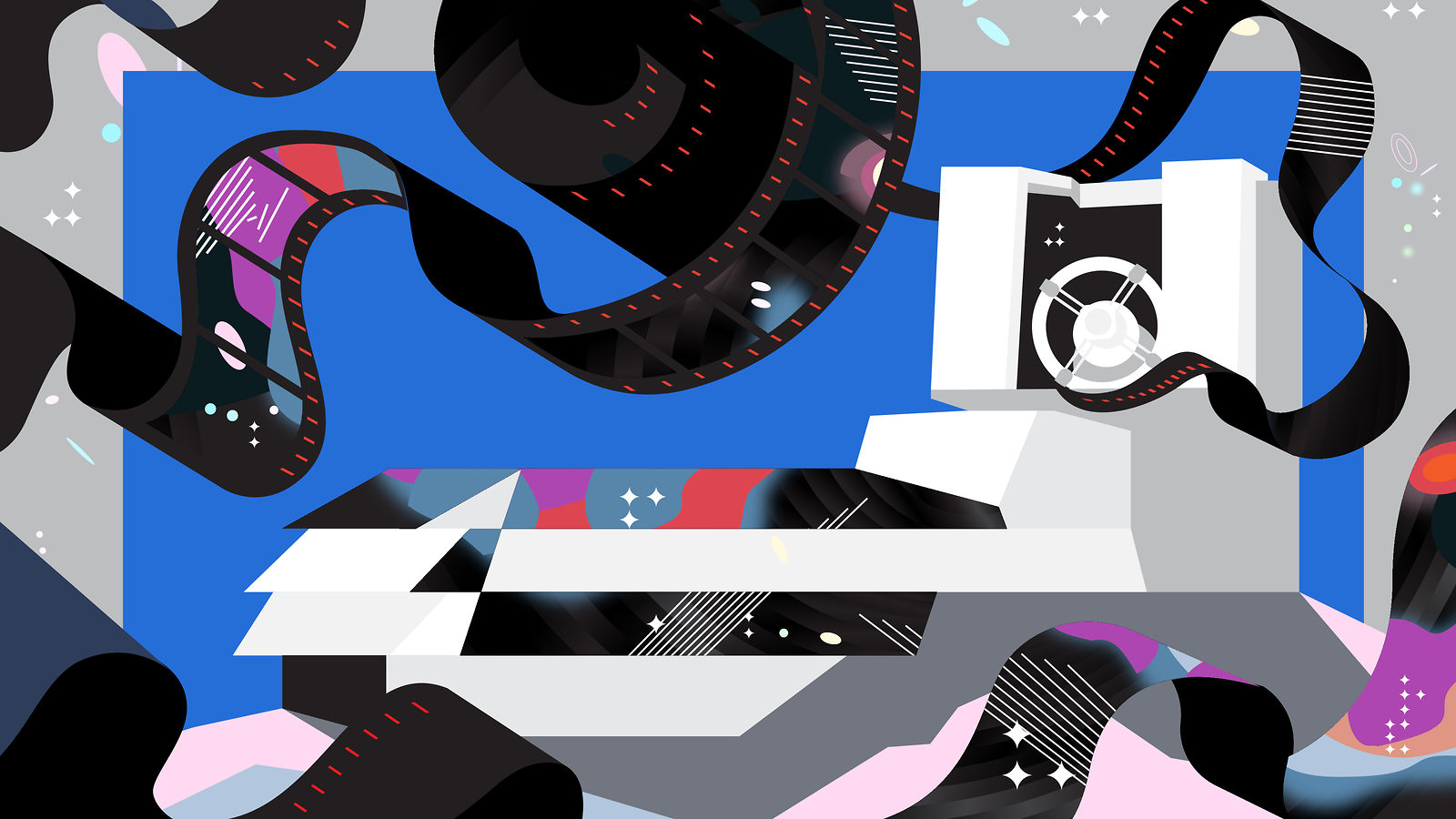 When the Large Synoptic Survey Telescope begins to survey the night sky in the early 2020s, it’ll collect a treasure trove of data. The information will benefit a wide range of groundbreaking astronomical and astrophysical research, addressing topics such as dark matter, dark energy, the formation of galaxies and detailed studies of objects in our very own cosmic neighborhood, the Milky Way.

LSST’s centerpiece will be its 3.2-gigapixel camera, which is being assembled at the US Department of Energy’s SLAC National Accelerator Laboratory. Every few days, the largest digital camera ever built for astronomy will compile a complete image of the Southern sky. Moreover, it’ll do so over and over again for a period of 10 years. It’ll track the motions and changes of tens of billions of stars, galaxies and other objects in what will be the world’s largest stop-motion movie of the universe.

Fulfilling this extraordinary task requires extraordinary technology. The camera will be the size of a small SUV, weigh in at a whopping 3 tons, and use state-of-the-art optics, imaging technology and data management tools. But how exactly will it work?

It all starts with choosing the right location for the telescope. Astronomers want the sharpest images of the dimmest objects for their analyses, and they also want to maximize their observation time. They need the nights to be dark and the air to be dry and stable.

It turns out that the Atacama Desert, a plateau in the foothills of the Andes Mountains, scores very high for these criteria. That’s where LSST will be located—at nearly 8700 feet altitude on the Cerro Pachón ridge in Chile, 60 miles from the coastal town of La Serena.

The next challenge is that most objects LSST researchers want to study are so far away that their light has been traveling through space for millions to billions of years. It arrives on Earth merely as a faint glow, and astronomers need to collect as much of that glow as possible. For this purpose, LSST will have a large primary mirror with a diameter close to 28 feet.

The mirror will be part of a sophisticated three-mirror system that will reflect and focus the cosmic light into the camera.

The unique optical design is crucial for the telescope’s extraordinary field of view—a measure of the area of sky captured with every snapshot. At 9.6 square degrees, corresponding to 40 times the area of the full moon, the large field of view will allow astronomers to put together a complete map of the Southern night sky every few days.

After bouncing off the mirrors, the ancient cosmic light will enter the camera through a set of three large lenses. The largest one will have a diameter of more than 5 feet.

Together with the mirrors, the lenses’ job is to focus the light as sharply as possible onto the focal plane—a grid of light-sensitive sensors at the back of the camera where the light from the sky will be detected.

A filter changer will insert filters in front of the third lens, allowing astronomers to take images with different kinds of cosmic light that range from the ultraviolet to the near-infrared. This flexibility enhances the range of possible observations with LSST. For example, with an infrared filter researchers can look right through dust and get a better view of objects obscured by it.  By comparing how bright an object is when seen through different filters, astronomers also learn how its emitted light varies with the wavelength, which reveals details about how the light is produced.

The heart of LSST’s camera is its 25-inch-wide focal plane. That’s where the light of stars and galaxies will be turned into electrical signals, which will then be used to reconstruct images of the sky. The focal plane will hold 189 imaging sensors, called charge-coupled devices, that perform this transformation.

Each CCD is 4096 pixels wide and long, and together they’ll add up to the camera’s 3.2 gigapixels. A “good” star will be the size of only a handful of pixels, whereas distant galaxies might appear as somewhat larger fuzzballs.

The focal plane will consist of 21 smaller square arrays, called rafts, with nine CCDs each. This modular structure will make it easier and less costly to replace imaging sensors if needed in the future.

To the delight of astronomers interested in extremely dim objects, the camera will have a large aperture (f/1.2, for the photographers among us), meaning that it’ll let a lot of light onto the imaging sensors. However, the large aperture will also make the depth of field very shallow, which means that objects will become blurry very quickly if they are not precisely projected onto the focal plane. That’s why the focal plane will need to be extremely flat, demanding that individual CCDs don’t stick out or recess by more than 0.0004 inches.

To eliminate unwanted background signals, known as dark currents, the sensors will also need to be cooled to minus 150 degrees Fahrenheit. The temperature will need to be kept stable to half a degree. Because water vapor inside the camera housing would form ice on the sensors at this chilly temperature, the focal plane must also be kept in a vacuum.

In addition to the 189 “science” sensors that will capture images of the sky, the focal plane will also have three specialty sensors in each of the four corners of the focal plane. Two so-called guiders will frequently monitor the position of a reference star and help LSST stay in sync with the Earth’s rotation. The third sensor, called a wavefront sensor, will be split into two halves that will be positioned six-hundredths of an inch above and below the focal plane. It’ll see objects as blurry “donuts” and provide information that will be used to adjust the telescope’s focus.

Once the camera has taken enough data from a patch in the sky, about every 36 seconds, the telescope will be repositioned to look at the next spot. A computer algorithm will determine the patches in the sky that will be surveyed by LSST on any given night.

While the telescope is moving, a shutter between the filter and the third lens camera will close to prevent more light from falling onto the imaging sensors. At the same time, the CCDs will be read out and their information digitized.

The data will be sent into the processing and analysis pipeline that will handle LSST’s enormous flood of information (about 20 terabytes of data every single night). There, it will be turned into useable images. The system will also flag potential interesting events and send out alerts to astronomers within a minute.

This way—patch by patch—a complete image of the entire Southern sky will be stitched together every few days. Then the imaging process will start over and repeat for the 10-year duration of the survey, ultimately creating the largest time-lapse movie of the universe ever made and providing researchers with unprecedented research opportunities. 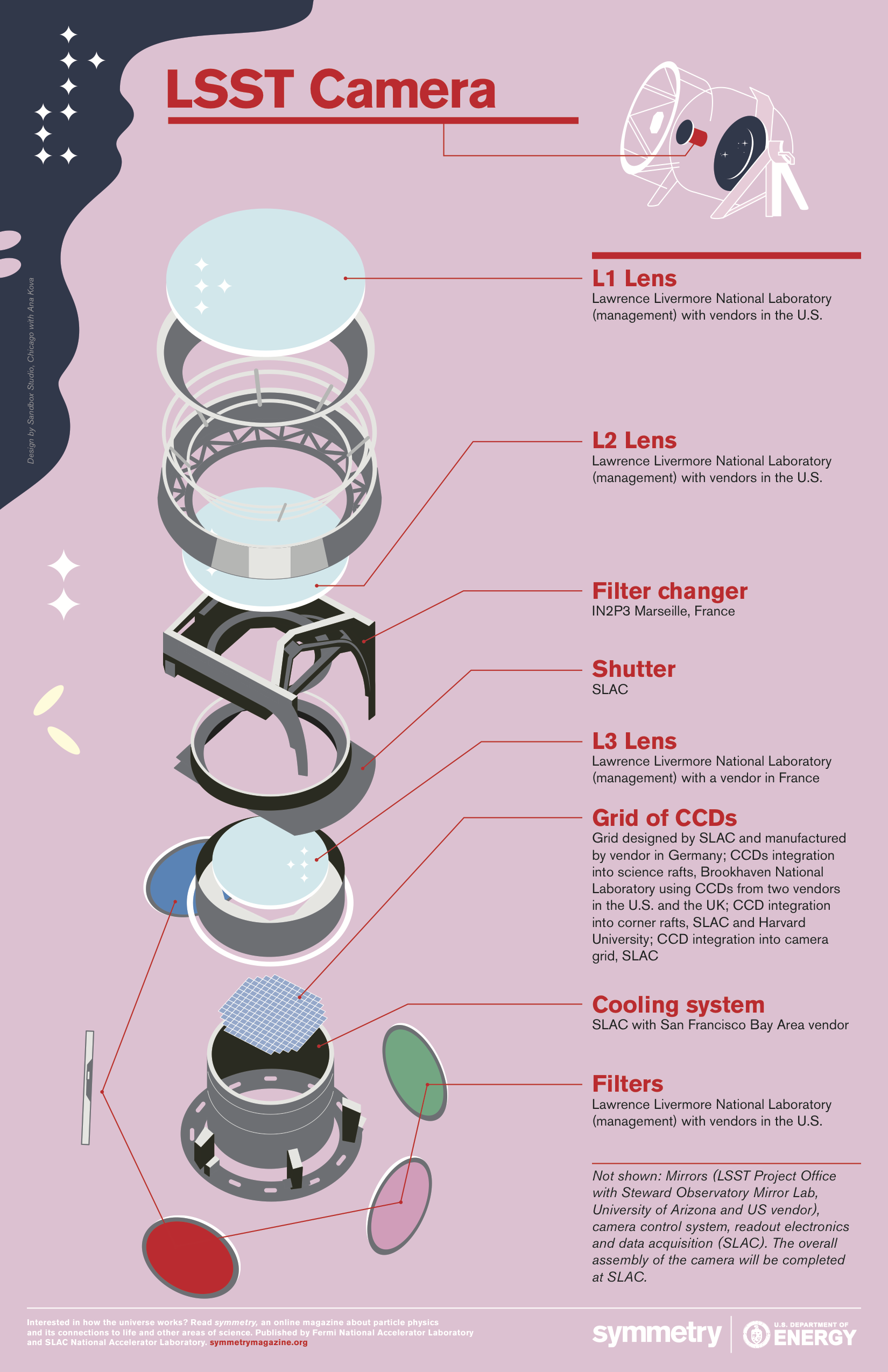