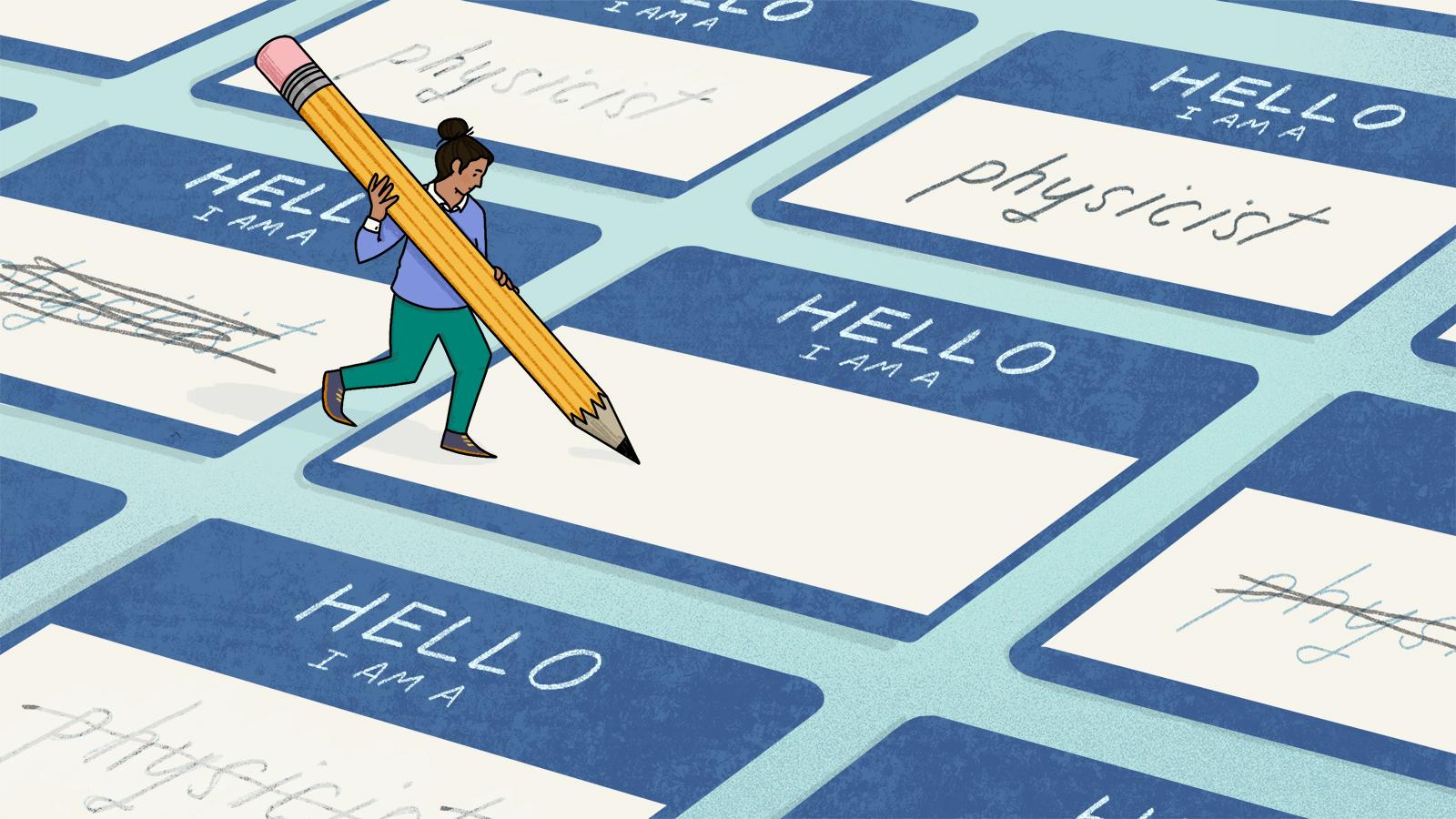 Zahra Hazari remembers falling in love with physics in high school. She excelled in the subject so much that her teacher sent other students to receive peer tutoring from her.

Once, when Hazari received a rare low grade on an exam, that same teacher made a point to check in with her—because he knew she could do better. On the next test, she pulled off a perfect score.

Hazari felt confident enough to declare a physics major in college. She started out as a straight A student, breezing through assignments. But in graduate school, that changed. “Along the way, my confidence just eroded,” Hazari says. “I didn’t fit in with my classmates—I didn’t feel a sense of belonging with them. And I didn’t feel recognized by my professors.”

“Right now, what we might call a physics identity is defined very narrowly.”

After struggling to connect with peer study groups and being turned away by potential research advisors, Hazari decided to pivot into physics education. It was there that she discovered a concept that helped her make sense of the isolation she experienced in graduate school: To succeed in physics, students need to have a physics identity. “It was one of these mind-blowing revelations,” she says.

The idea has gotten a lot of attention in recent years. In 2020, the American Institute of Physics dropped an extensive report investigating what obstacles bar African American students from earning bachelor’s degrees in physics. Their findings listed the development of a physics identity as one of “five factors responsible for the success or failure of African Americans in physics and astronomy.” In April, the American Physical Society held a session on teaching practices that could help students develop physics identities.

Some scholars think about physics identity as the way a person is perceived and acknowledged by others. “But the way I define it is how you see yourself with respect to physics,” says Hazari, who has been a physics education researcher at Florida International University since 2014. But “the two are obviously related: If other people start to see you as a physics person, you start to see yourself as one, too.”

In her work, Hazari recognizes four attributes necessary for someone to build a physics identity: interest in the topic, feelings of competency, recognition from others and a sense of belonging within the community.

For students to begin forming these identities, they need to be given the opportunity to see themselves as physicists. Narbe Kalantarians, a professor at Virginia Union University, says that one way they build this into the undergraduate curriculum is by restructuring the traditional advanced lab class—in which physics majors reproduce decades-old experiments—with a fresher approach. “We want to give them a taste of what it’s like to actually propose, build, carry out and then document their own projects,” he says.

Others advocate for introducing students to physics before they get to college. Valerie Otero, a physics education researcher at the University of Colorado Boulder, developed the PEER Physics program to engage high school students in the process of developing, critiquing and revising evidence-based ideas. Even though the subject has a reputation as one of the hardest sciences to grasp, “physics is the classroom-friendly science,” Otero says. “You can see it with your own eyes, and all the experiments can be done in real time.”

In addition, Otero says it is necessary to provide support to educators at all levels, including college, who may be exposing students to physics for the first time. “It’s not easy to learn how to run a classroom where the discipline meets the student—and it’s our responsibility to make those connections,” she says.

Although they have expertise in the topic they teach, many professors lack formal education training. Otero developed a program to pair physics faculty with pedagogical learning assistants who helped them implement inclusive teaching practices in the classroom. College students educated using this approach, which won an APS Excellence in Physics Education Award, were 60% more likely than their peers to pass physics, mathematics and chemistry classes.

People with minoritized racial, ethnic and gender identities face unique challenges when trying to build a physics identity, says Simone Hyater-Adams, who earned her doctoral degree at CU Boulder studying the intersection of race, performance and physics identity. “Who a physicist is clearly has a standard, and a definition”—usually a White, cisgender man who conducts research at a top laboratory or university, she says.

In her research, Hyater-Adams found that Black physicists—regardless of their career stage—often don’t identify as physicists because they don’t fit into that mold. That’s a critical problem to solve, she says, as having a physics identity can make all the difference in whether marginalized students feel able to persist and thrive.

Many diversity initiatives in physics center around inviting more people of marginalized identities into the already-existing structures of the discipline. But a true commitment to equity and inclusion, Hazari says, requires transforming what it means to do and teach physics to make it possible for those who are invited in to stay. “Right now, what we might call a physics identity is defined very narrowly,” she says. “And so what I’m talking about is disrupting what it means to be a physics person—to make that broader and more diverse.”

That means moving past the expectation that students should assimilate into the present culture of physics. Instead, Hazari says, physicists should value the unique perspectives that students who differ from the norm bring to the field. Hazari implements this philosophy in an APS partner organization called STEP UP, which provides community and resources for teachers to support the physics identity development of young women at the high school level.

Ultimately, physics students who are unable to connect with the discipline miss out: on community, resources and career advancement opportunities. Kalantarians, who spoke at the APS session back in April, asserts that this is also a loss to the field: “It’s no secret that physics is very mono-cultured,” he says. “It’s desperately in need of a revitalization with fresh, new perspectives and energy—just like any other field.”

His overarching goal is to make sure students know that if they want to do physics, they have a place in it. He also wants them to know that engaging in academic research isn’t the only way to be a physicist. “There are ways to help the community, to help fix problems in our society, with the skills of being able to collect data and interpret it to the public,” and this work should be included in the definition of what it means to be a physicist, too, Kalantarians says.

Hyater-Adams agrees. “I call myself a physicist to this day, even though I haven’t done research in a lab since undergrad, and I haven’t published anything in physics journals since I was a graduate student,” she says.

Currently, she works at STEM From Dance, a nonprofit that blends technology and performance to empower girls of color to pursue scientific careers. “I think it’s revolutionary that I can still say I’m a physicist while I’m doing what I’m doing. And I think we need to continue to push that boundary.”