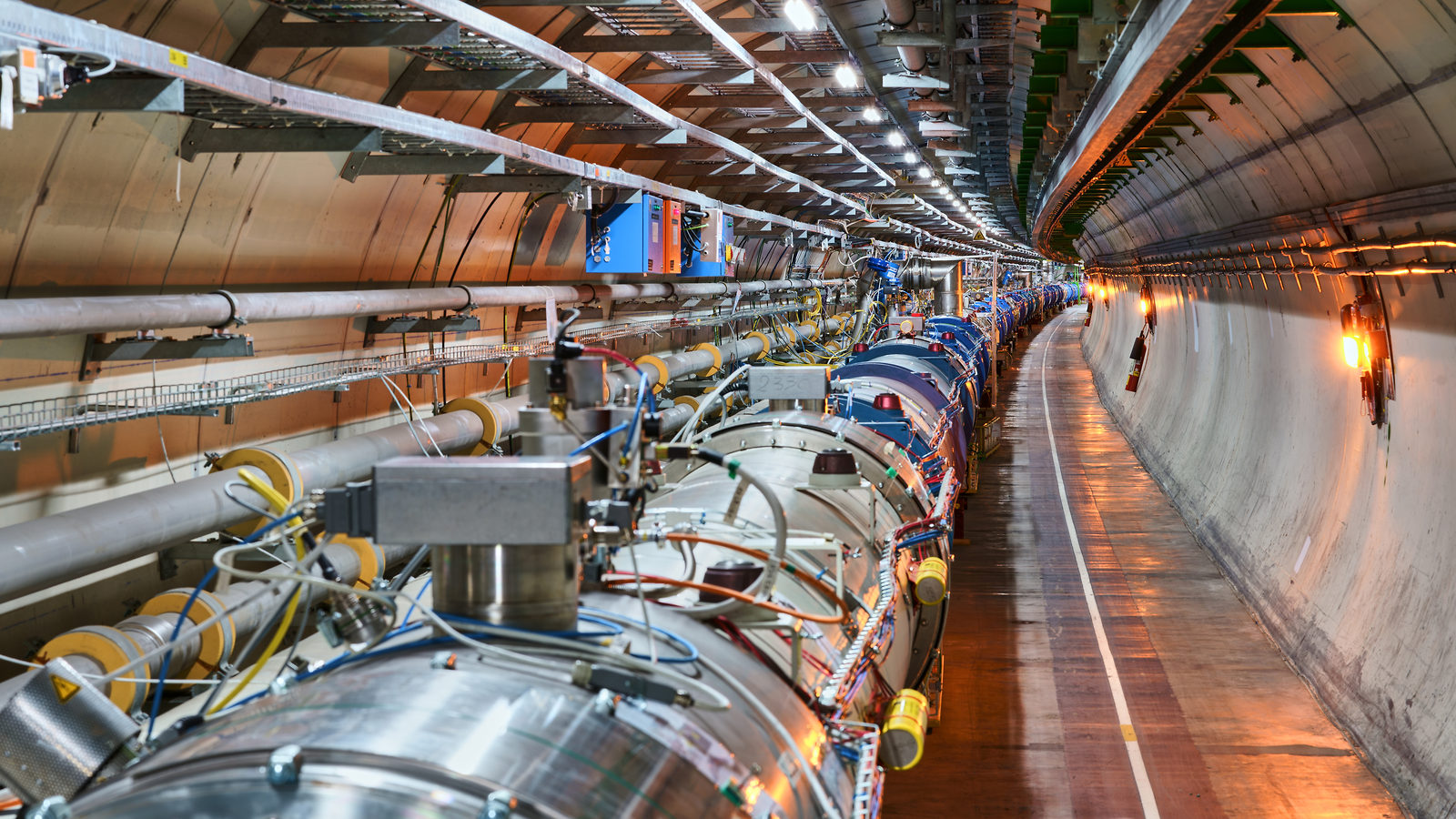 About seven years ago, physicist Stephane Willocq at the University of Massachusetts became enthralled with a set of theories that predicted the existence of curled-up extra dimensions hiding within our classical four dimensions of spacetime.

“The idea of extra spatial dimensions is appealing because it allows us to look at the fundamental problems in particle physics from a different viewpoint,” Willocq says.

As an experimental physicist, Willocq can do more than ponder. At the ATLAS experiment at the Large Hadron Collider at CERN, he put his pet theories to the test.

Models based on those theories predicted how curled-up extra dimensions would affect the outcome of proton-proton collisions at the LHC. They predicted the collisions would produce more high-energy particles than expected.

After several searches, Willocq and his colleagues found nothing out of the ordinary. “It was a great idea and disappointing to see it fade away, bit by bit,” he says, “but that’s how scientific progress works—finding the right idea by process of elimination.”

The LHC research program is famous for discovering and studying the long-sought Higgs boson. But out of the spotlight, scientists have been using the LHC for an equally important scientific endeavor: testing, constraining and eliminating hundreds of theories that propose solutions to outstanding problems in physics, such as why the force of gravity is so much weaker than other known forces like electromagnetism.

“There is only one right answer,” Willocq says. “We haven’t found it yet.”

Now that scientists are at the end of the second run of the LHC, they have covered a huge amount of ground, eliminating the simplest versions of numerous theoretical ideas. They’ve covered four times as much phase space as previous searches for heavy new particles and set strict limits on what is physically possible.

These studies don’t get the same attention as the Higgs boson, but these null results—results that don’t support a certain hypothesis—have moved physics forward as well.

Having chased down their most obvious leads, physicists are now adapting their methodology and considering new possibilities in their pursuit of new physics.

Thus far, physicists have often used a straightforward formula to look for new particles. Massive particles produced in particle collisions will almost instantly decay, transforming into more stable particles. If scientists can measure all of those particles, they can reconstruct the mass and properties of the original particle that produced them.

This worked wonderfully when scientists discovered the top quark in 1995 and the Higgs boson in 2012. But finding the next new thing might take a different tactic.

“Finding new physics is more challenging than we expected it to be,” says University of Wisconsin physicist Tulika Bose of the CMS experiment. “Challenging situations make people come up with clever ideas.”

One idea is that maybe scientists have been so focused on instantly decaying particles that they’ve been missing a whole host of particles that can travel up to several meters before falling apart. This would look like a firework exploding randomly in one of the detector subsystems.

Scientists are rethinking how they reconstruct the data as a way to cast a bigger net and potentially catch particles with signatures like these. “If we only used our standard analysis methods, we would definitely not be sensitive to anything like this,” Bose says. “We’re no longer just reloading previous analyses but exploring innovative ideas.”

Since looking for excess particles coming out of collisions has yet to yield evidence of extra spatial dimensions, Willocq has decided to devote some of his efforts to a different method used at LHC experiments: precision measurements.

Models also make predictions about properties of particles such as how often they decay into one set of particles versus another set. If precise measurements show deviations from predictions by the Standard Model of particle physics, it can mean that something new is at play.

“Several new physics models predict an enhanced rate of rare subatomic processes,” Bose says. “However, their rates are so low that we have not been able to measure them yet.”

In the past, precision measurements of well-known particles have overturned seemingly bulletproof paradigms. In the 1940s, for example, the measurement of a property called the “magnetic moment” of the neutron showed that it was not a fundamental particle, as had been previously assumed. This eventually helped lead to the discovery of particles that make up neutrons: quarks.

Another example is the measurement of the mismatched decays of certain matter and antimatter particles, which led to the prediction of a new group of quarks—later confirmed by the discoveries of the top and bottom quarks.

The plan for the LHC research program is to collect a huge amount of data, which will give scientists the resolution they need to examine every shadowy corner of the Standard Model.

Because many of these predictions have never been thoroughly tested, scientists are hoping that they’ll find a few small deviations that could open the door to a new era of physics research. “Nature might be tough with us,” Bose says, “but maybe nature is testing us and making us stronger.”