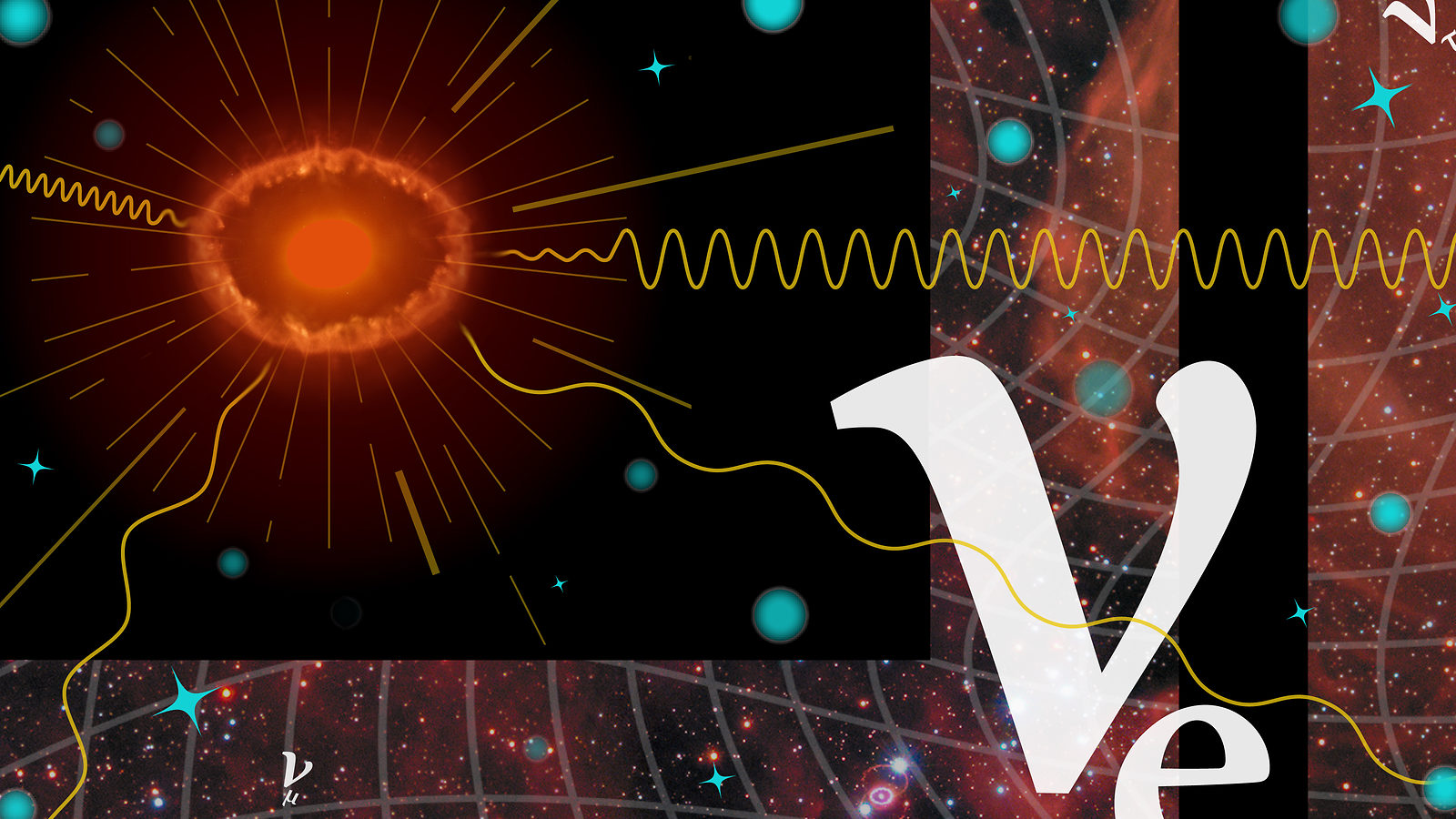 The supernova that keeps on giving

Supernova 1987A, the closest supernova observed with modern technology, excited the world more than 30 years ago—and it remains an intriguing subject of study even today.

Astronomer Robert Kirshner didn’t believe the news. It was early one morning in February 1987 and a colleague was recounting an unthinkable rumor: A star had exploded in a galaxy next door.

If it were a prank, it wouldn’t be the first time, so Kirshner wasn’t alone in his skepticism. “It was so unexpected and outrageous that I think for a few hours, we discounted it,” says Stan Woosley, an astronomer at UC Santa Cruz. “But then the messages kept pouring in from all over the world. It was clear that it was real and our lives were all going to change.”

Although astronomers now spot thousands of supernovae every year, an explosion close enough to be seen with the unaided eye is still a rare event. In fact, the cosmic explosion—dubbed SN1987A or just 87A for short—remains the closest supernova that has been seen in nearly four centuries. Its proximity, plus the use of modern technology, allowed astronomers across the globe to catch an incredible show—one that continues today.

Supernovae change the fate of entire galaxies, altering the chemical make-up of the interstellar medium and prompting the formation of new stars. They have even had quite an effect on you; the calcium in your bones, the oxygen you breathe and the iron in your hemoglobin were all elements originally unleashed in these massive stellar explosions.

We know this now. Before 1987, however, much of our understanding of supernovae was based solely on theory. So astronomers around the world scrambled to observe the live event.

The Russian space station literally rocked back and forth to catch gamma-rays from the explosion. NASA looked for gamma-rays as well, launching high-altitude balloons from Australia to observe them. The Japanese satellite GINGA successfully detected X-rays. Observatories in South Africa, Chile and Australia kept track of the supernova’s light curve. And huge underground detectors in Japan, the United States and Russia detected subatomic particles known as neutrinos.

“It was a big party, a worldwide party, and stayed that way all year long,” Woosley says.

But it didn’t end there. Nearly any time a new observatory has come online over the last 33 years, it has swiveled toward the dying explosion. “All the instruments of modern astronomy have been used, by and large,” says Adam Burrows from Princeton University. “There isn't any class of instrumentation that hasn't been employed to study 87A.”

A type II supernova erupts when a heavyweight star runs out of fuel and can no longer support itself against gravity. The bulk of the star comes crashing down toward its core, forcing it to collapse into one of the densest astrophysical objects known, a neutron star. A neutron star squeezes a few solar masses’ worth of star into an orb the size of a city. Meanwhile, the onrush of gas from the rest of the star rebounds against that core, sending a shock wave back toward the surface, which ultimately tears the star apart.

At least that was the theory. If true, the action would release a huge stream of particles called neutrinos. And because they would pass through the bulk of the star unimpeded, they would arrive at Earth even before the explosion could be seen as a blast of light. (In fact scientists now think that it’s not the bounce that blows up the star, but the neutrinos.) 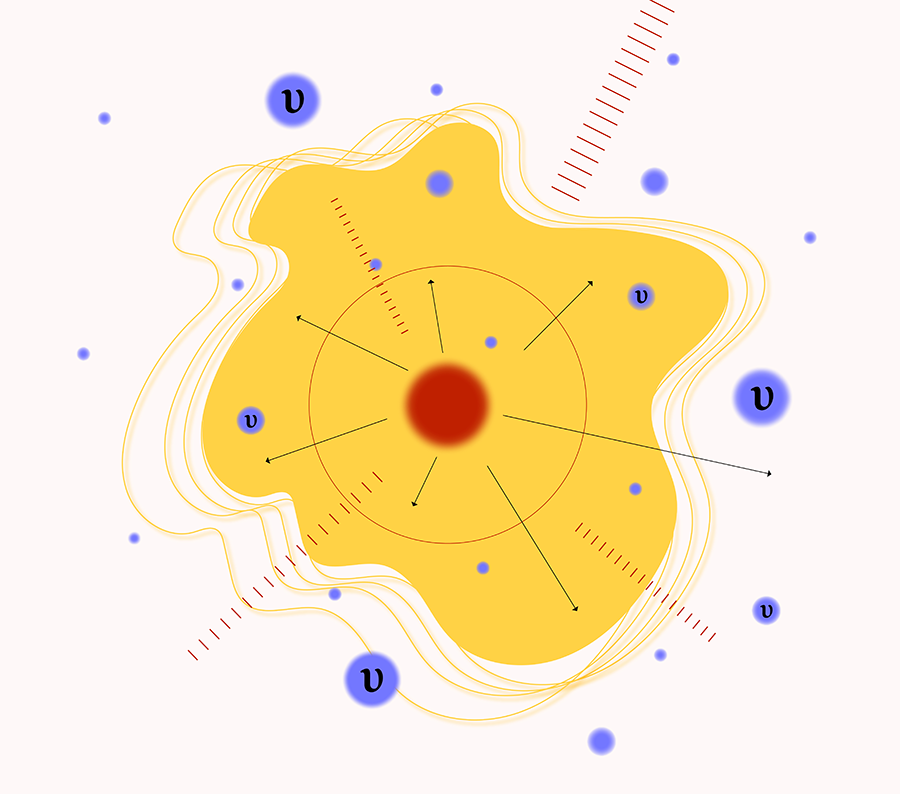 To check, scientists began poring over data from the Kamiokande II neutrino detector in Japan as soon as they heard about the eruption. It was painstaking work, but after a few days they spotted nearly a dozen neutrinos that had arrived a few hours before the flash of light—a Nobel Prize-winning discovery that confirmed a neutron star had formed within the blast. “It was the best time so far in my life,” says Masayuki Nakahata, who as a graduate student helped make the detection.

In total, the Kamiokande II detector in Japan counted 11 neutrinos, the IMB facility in Ohio reported eight and the Baksan Neutrino Observatory in Russia reported five more. Neutrino detectors haven’t seen so many particles at once since.

But while the observation of neutrinos confirmed theories, the observation of the type of star that went supernova went against them. Before SN1987A, textbooks asserted that only puffy red stars known as red supergiants could end their lives in such an explosion. But when scientists peered through past images of the location of the supernova, they found that 87A’s progenitor was a hotter and more compact blue supergiant.

Astronomers were baffled until the Hubble Space Telescope was launched in 1990. Its early images revealed what other telescopes had only hinted at: a thin ring of glowing gas that encircled the dying ember that 87A left behind, with two fainter rings above and below. These were clues that the star had dumped a lot of gas into space tens of thousands of years before it exploded. A previous outburst, likely from a red supergiant, could have whittled the star down to expose its hotter, bluer innards. Or perhaps two stars had collided together; this would have shed a lot of gas and left behind a hot mess.

To this day, astronomers continue to pivot the Hubble Space Telescope toward SN1987A nearly every year—and for good reason. As the ejecta from the explosion continue to expand outward, they slam into the surrounding medium, lighting up previously unseen material that was emitted in winds before the supernova eruption. “We see something new every time we take an image,” says Josefin Larsson from the KTH Royal Institute of Technology in Sweden.

They’re not the only ones. The Atacama Large Millimeter/submillimeter Array (ALMA) in Chile recently claimed to have spotted telltale evidence of the “missing” neutron star.

Although the detection of neutrinos indicated that a neutron star had formed within the embers, there was one major snag: Scientists have yet to actually spot the star itself. That’s a problem, given that the neutron star should finally be visible—unless of course there is too much dust surrounding the explosion. “It’s like trying to observe something through a Sahara Desert storm,” Woosley says.

Finally, there is a hint that the neutron star is there. Using ALMA, Phil Cigan, an astronomer from Cardiff University in the United Kingdom, and his colleagues spotted a small bright patch—affectionally dubbed “the blob”—within the dust of 87A consistent with where scientists predicted the neutron star should be.

They’re not calling the case closed, though; without being able to see the star directly, no one can prove that the supernova had the predicted effect. “It’s only tantalizing,” Burrows says. “We have to watch for a much longer time to see what’s left emerge.”

One hypothesis suggests that perhaps a neutron star formed but that it was only short-lived. If more material rained down in the aftermath of the explosion, the star could have gained so much weight that it collapsed further to form a black hole. “Suppose that happened, let’s say, in five days after the explosion,” says Kirshner, who is still at Harvard University and also works full-time as head of science philanthropy for the Gordon and Betty Moore Foundation. “I don’t think we would have any way to know whether that was true or not.”

Mikako Matsuura, an astronomer who worked on the ALMA observations at Cardiff, agrees that we cannot exclude this hypothesis. But Woosley says he doubts it, arguing that the most natural time to make a black hole would have been within seconds—a hypothesis that’s discounted by the length of the neutrino arrival.

Whether or not the supernova created a neutron star is “the biggest remaining question in 1987A right now,” Burrows says. And that means that observations won’t stop anytime soon, he says. “It has been a moveable feast—and continues to be.”

Astronomers hope it’s just a taste of what’s to come. Supernovae likely erupt every 50 years in a galaxy like ours, yet one hasn’t been seen since 1604 (SN1987A was not actually in our galaxy; it was nearby). “We feel as if we’re due for one,” Kirshner says.

It’s an exciting prospect, given the number of new observatories that have come online in recent years or are scheduled to begin operation soon. The James Webb Space Telescope would be able to image a supernova in the infrared. Radio telescopes like the upcoming Square Kilometer Array in South Africa and ALMA would collect radio waves. The Athena X-ray observatory, which is scheduled to be launched by the European Space Agency in the early 2030s, would image the energetic emission from the supernova. Gravitational wave facilities such as LIGO in North America, Virgo in Europe and KAGRA in Asia would detect ripples in space-time from such a supernova. Neutrino facilities such as IceCube at the South Pole, the NOvA detector (and an even larger upcoming project, the DUNE detector) in the United States, and the Super-Kamiokande detector (and an even larger upcoming project, the Hyper-Kamiokande detector) in Japan would be much more sensitive to the influx of neutrinos.

Nakahata, who owes his career to 87A and today works as a neutrino physicist, notes that the Hyper-Kamiokande detector alone would be able to witness tens of thousands of the particles in such an instance, a major upgrade from Kamiokande II’s previous record of 11. That would allow scientists to pin down further details behind the neutron star, like how much energy it might emit and the mass of the star itself. While the Hyper-Kamiokande detector would primarily be sensitive to antimatter particles—antineutrinos—the DUNE detector is complementary in that it would primarily be sensitive to matter particles—neutrinos. And additional observations from other detectors across the spectrum would provide even further insights.

“We should be treated to an incredible show,” Burrows says. “It would dwarf 87A in importance.”