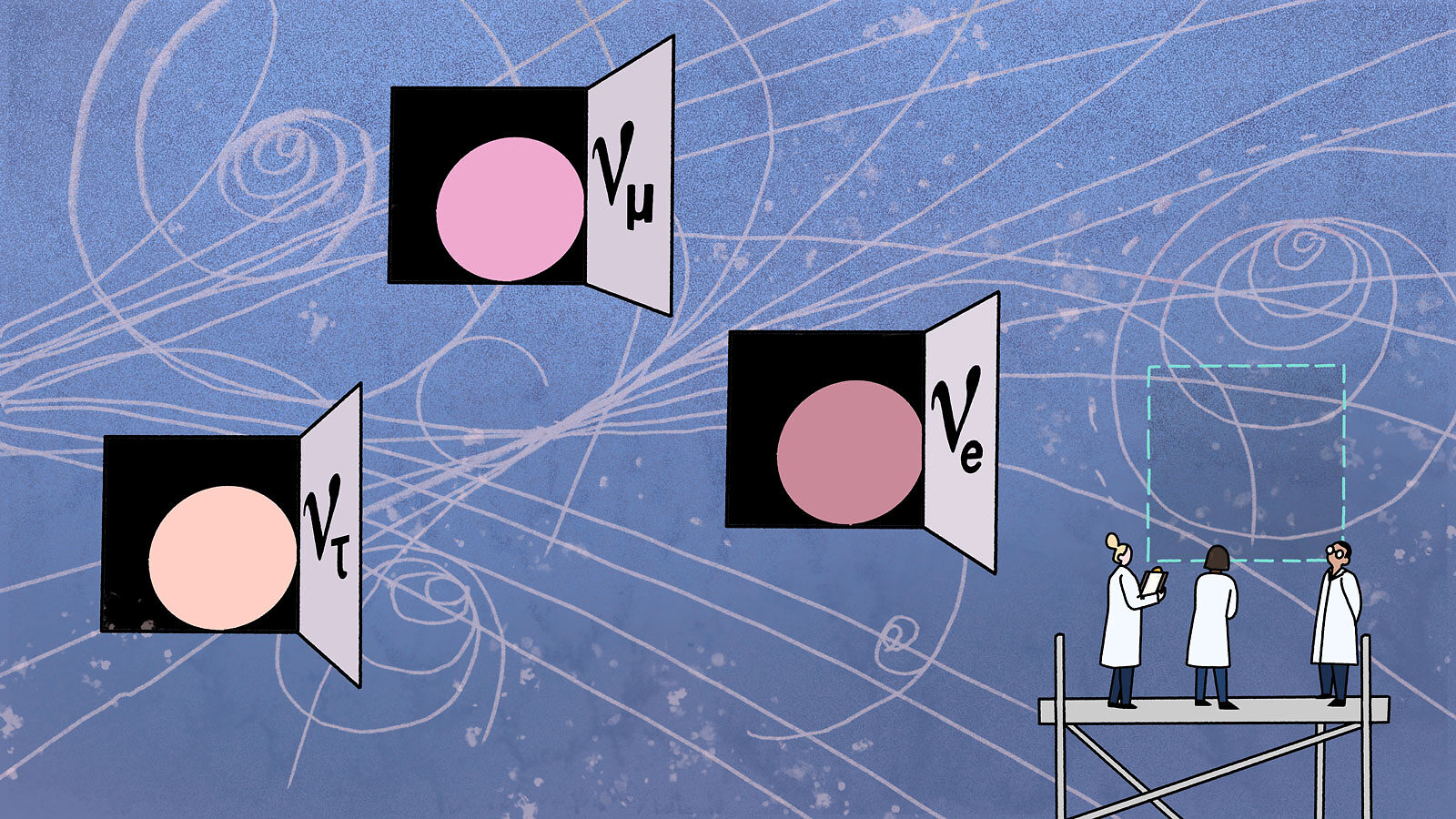 In Germany in 1930, a group of scientists held a conference on nuclear physics, and they invited Wolfgang Pauli. The Austrian physicist was known as the originator of the Pauli exclusion principle, work that furthered scientists’ understanding of matter and would eventually earn Pauli a Nobel Prize in Physics.

Pauli couldn’t attend the German conference; he had a conflict in Zurich. Instead, he sent the attendees a letter that would turn out to be one of the more significant correspondences in physics history. In it, he predicted the existence of what would eventually be known as the neutrino.

Scientists have since discovered and studied the properties of the theoretical particle. But big questions remain, including whether an undiscovered type of neutrino could be hiding from researchers’ detectors. 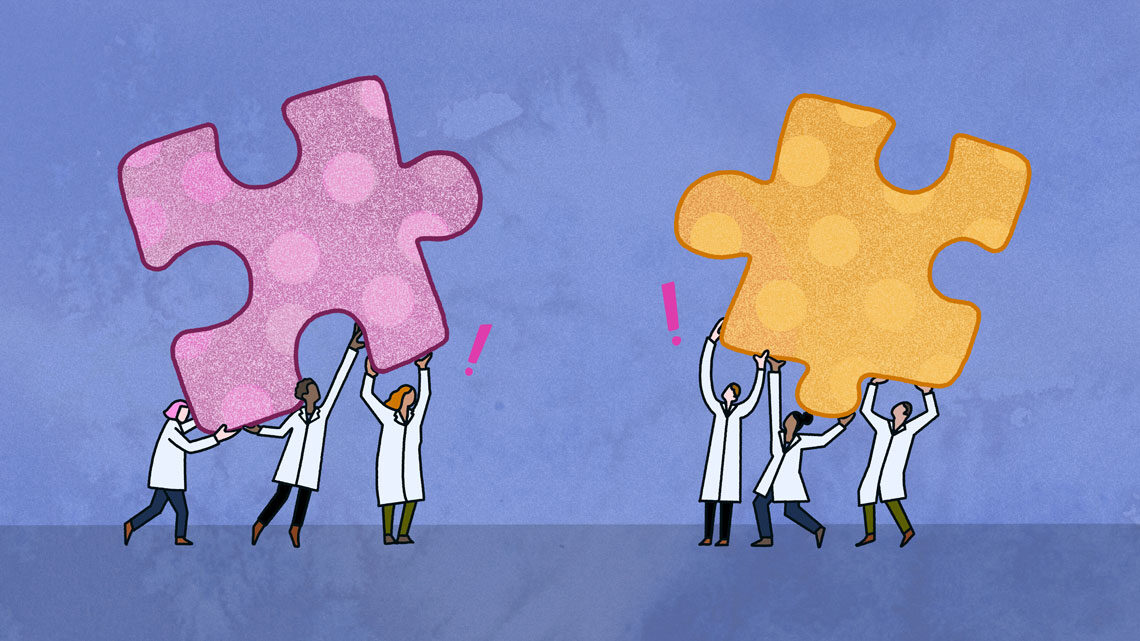 In his letter to the conference attendees, Pauli detailed ideas he’d had about beta decay, a process that had been troubling the nuclear physicists.

In beta decay, an unstable atom releases energy in the form of a particle (called a beta particle). Scientists studying beta decay found that the energy of the beta particle was not enough to account for the total energy the decaying atom lost.

Pauli had an idea about where the missing energy could be. He posited that an atom undergoing beta decay actually emitted more than one particle; it was just that the second particle had neither charge nor mass and was therefore undetectable by the technology of the day.

That was the problem, though. If the particle were undetectable, there would be no way to test whether Pauli’s theory was correct. Pauli lamented that proposing the existence of an undetectable particle was “something no theorist should ever do” and kept the letter informal rather than write an official paper about an idea he was too uncomfortable to fully claim.

But the idea of an energy-carrying “ghost particle” resonated with many researchers, including Enrico Fermi. A few years later, Fermi figured out a complete theory of nuclear beta decay incorporating the new particle, which he christened the “neutrino.” Fermi theorized that the neutrino interacted through an unknown force, now known as the weak force, which interacts only at extremely short range.

Not all scientists were as pessimistic as Pauli about detecting the neutrino. Physicist Walter Baade even made a bet with Pauli that his undiscoverable particle would one day be found.

In the 1950s, physicists Clyde Cowan and Fred Reines at the US Department of Energy’s Los Alamos National Laboratory designed a detector to catch neutrinos. It would detect the particles passing through and occasionally interacting via the weak force. To ensure they’d nab a few, they planned to set up their device near the most extreme collection of unstable atoms undergoing beta decay that they could create: a nuclear blast.

Aside from the technical challenges it would take to study a nuclear explosion, it turned out that a nuclear bomb would also produce a lot of background radiation that would make it difficult to isolate the signals from the neutrinos. So Cowan and Reines changed their plans. Instead, they set up their detector in South Carolina next to a nuclear reactor.

While the reactor produced neutrinos much more slowly than a bomb, the detector eventually picked up enough signals to confirm the existence of neutrinos. Pauli bought Baade a case of champagne to celebrate the discovery.

More than meets the eye

Scientists had detected the undetectable particle. But there was a lot left to learn about it.

In the 1960s, astrophysicists Raymond Davis and John Bahcall measured neutrinos coming from the sun with an experiment installed in Homestake Gold Mine in South Dakota. They detected only a third as many of the particles as they expected.

In the ’90s, researchers at the Sudbury Neutrino Observatory in Canada and the Super-K experiment in Japan determined the cause of the missing neutrinos. The neutrino could “oscillate,” or shift between the three different types or “flavors”: electron neutrinos, muon neutrinos and tau neutrinos. Oscillation implies mass, so the discovery also let them know that neutrinos were not massless like they had thought.

Scientists had worked out theories about how neutrinos should oscillate, but those theories were put to the test in an experiment at Los Alamos called the Liquid Scintillator Neutrino Detector.

LSND studied a beam of neutrinos—specifically, muon antineutrinos—to see how many of them oscillated to a different type over a short distance. Its results indicated more of them than anticipated had transformed into electron antineutrinos.

Scientists wondered: Could this elevated number of oscillations point to the influence of an even more elusive ghost particle? One that did not even interact through the weak force? Was it time to bet another case of champagne?

In 2002, a similar experiment at Fermi National Accelerator Laboratory, named after Enrico Fermi, followed up. The MiniBooNE experiment operated at a different energy level and used a different experimental methodology than LSND; it recorded an excess in electron neutrinos as well.

The results could possibly be accounted for if neutrinos were oscillating in strange ways—say, to more than three flavors. Because it would interact even less strongly with matter, scientists called the hypothetical missing neutrino flavor a “sterile” neutrino.

There doesn’t have to be just one type of sterile neutrino, says Harvard physicist Carlos Argüelles-Delgado. In the Standard Model of physics, for example, many particles and phenomena come in sets of three; maybe the sterile neutrinos do, too. 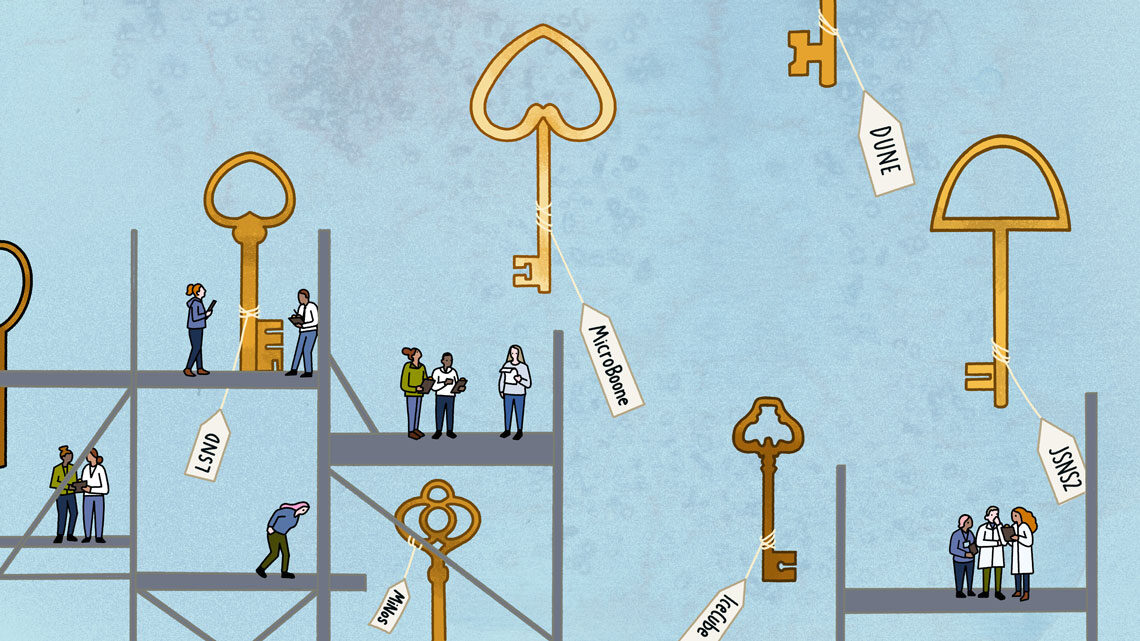 Argüelles-Delgado works on the IceCube experiment. Run by the University of Wisconsin and based in Antarctica, IceCube looks at neutrinos emitted from the sun or other astronomical phenomena, such as supernovae.

Although sterile neutrinos aren’t its focus, IceCube is one of several experiments offering input into the current search. So far IceCube has mostly just tightened constraints around what sterile neutrinos could be, Argüelles-Delgado says.

Another experiment that has provided valuable information to the search is MINOS, which from 2005 to 2012 studied a beam of neutrinos produced at Fermilab, sampling the particles both close to the origin of the beam and far from it in a mine in Minnesota. Its successor, MINOS+, collected data with a neutrino beam from 2013 to 2016. The experiments did not find anything that might suggest the existence of sterile neutrinos.

Also contributing to the conversation are a group of experiments that harken back to the first detection of neutrinos: reactor experiments such as Daya Bay in China, Double Chooz in France and RENO in Korea.

To date, they haven’t found any reliable evidence to back up MiniBooNE or LSND, says Virginia Tech physicist Patrick Huber. In fact, Daya Bay, in a joint result with MINOS+, set stringent limits on sterile neutrinos.

But the reactor experiments have been involved in their own conflict between theory and experimental results. In 2011, a group of theorists recalculated the expected number of electron antineutrinos that reactor experiments should have seen. They found that their prediction did not match the measurement.

Since the discovery of the possible anomaly, researchers at Daya Bay, as well as theorists and other experimentalists, have continued working on their models and studying the decay processes that produce these antineutrinos.

Experiments on the horizon

At the Japan Proton Accelerator Research Complex, an experiment called JSNS^2 plans to check the LSND observation. “We aim to confirm or defeat the existence of a sterile neutrino with the same experiment as LSND,” says Takasumi Maruyama, a J-PARC researcher on JSNS^2. “There are lots of experiments, but we have to understand what's going on with the same neutrino source and same neutrino interaction.

“So 20 years after the LSND results, I think it’s a nice time to follow up on the LSND experiment.”

MicroBooNE also is a part of a larger experiment involving a series of three detectors known as the Short Baseline Neutrino Program at Fermilab. The three detectors will paint a detailed picture of neutrino behavior by examining oscillations at three different distances from the source of a neutrino beam. The ICARUS detector, which is the farthest from the source, will start collecting physics data this fall. Construction of the Short Baseline Near Detector, which is the closest to the source, is underway.

Huber says he imagines sterile neutrinos will remain hidden, possibly until even more precise, future detectors can be designed and built. It could be that they will never be found, either because they don’t exist or because Pauli’s predicted particle has an undetectable side to it after all.

Argüelles-Delgado says that, whether or not upcoming experiments are able to find sterile neutrinos, science will benefit from the search.

“In particle physics when there are hints, you have to pursue those hints,” he says, “because some hints will end up being challenges that just enable you to improve your detector technology and techniques—and other hints will do that and also let you discover new physics. So you always win.”