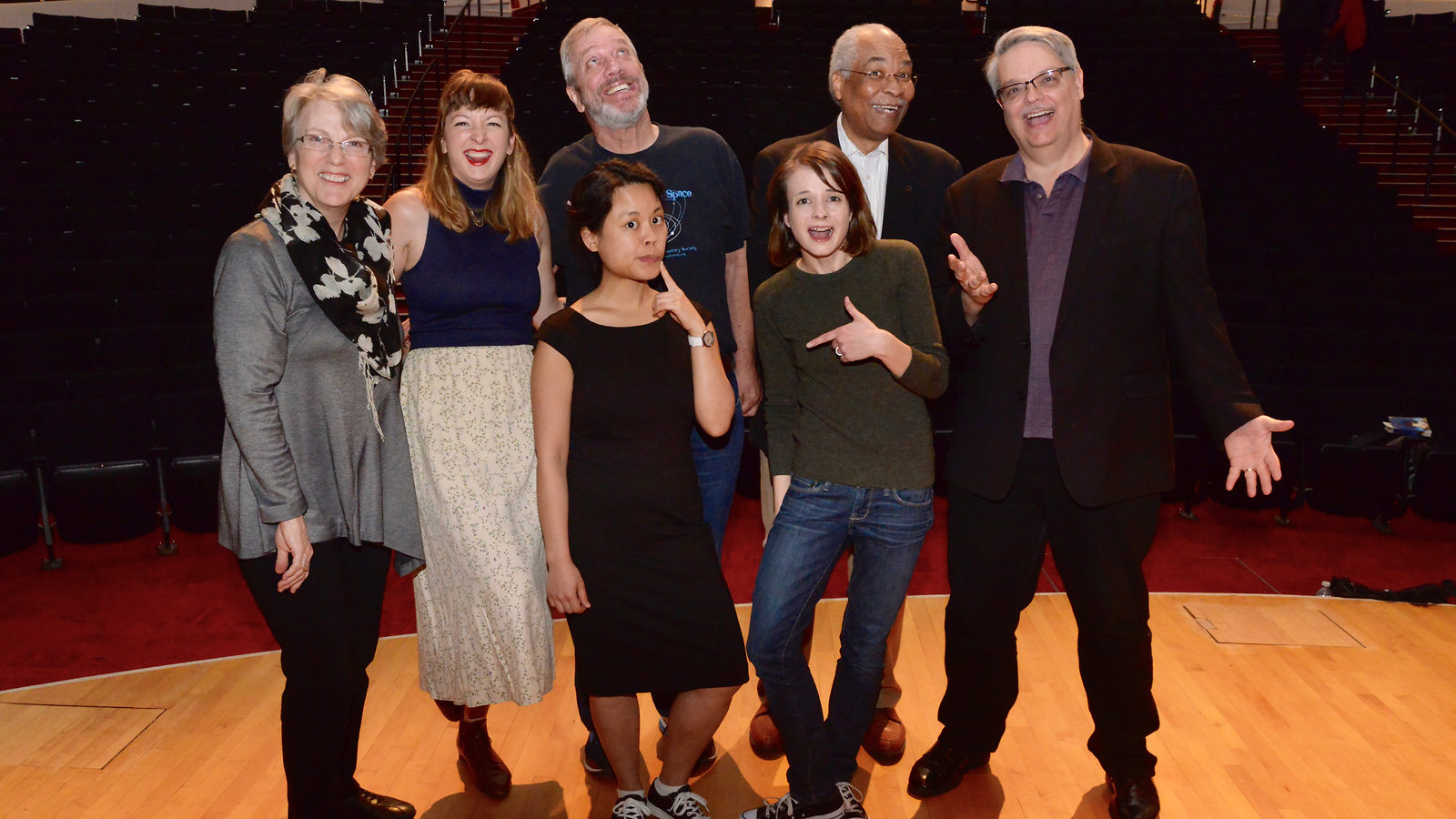 How do snails, shooting stars and science fiction books all relate to physics? They’re just a few examples of where Fermilab scientists and other guest speakers drew inspiration for a recent edition of The Story Collider.

“Stories underlie a lot of what we do as scientists, whether we know it or not,” says Cindy Joe, a Fermilab engineering physicist. “We have a lot of beautiful stories, both science-related and not, but as scientists we sometimes pretend we’re above the emotional part of what we do. But it’s okay for emotion to underlie it.”

The Story Collider features storytellers in podcasts and live shows across the country—everyone from comedians and doctors to poets and physicists. It aspires to humanize its speakers and show that at the basis of every profession, including the sciences, is a person with hopes, dreams, desires and struggles.

On May 12, The Story Collider visited Fermilab with hosts Erin Barker and Kellie Vinal to explore some personal stories from people affiliated with lab. It was the culmination of the spring season of the Fermilab Arts and Lecture Series, which organizes and hosts events like concerts, theater productions and public lectures at the lab.

The evening saw both laughter and tears. Joe told the story of her pet snail who helped her through difficult times at the beginning of her physics career, when she often felt overlooked and ignored. But caring for a small, often overlooked and non-traditional pet helped Joe realize her worth as a person and a scientist.

“I realized that my core belief that every single person had fundamental, inherent value should maybe also apply to myself,” she said. “That my different perspective was important. That my experiences were real. That my contributions were good. That I deserved no less gentle kindness and consideration than anyone else. And maybe I should treat myself like it.”

Don Lincoln, Fermilab senior scientist and book author, told the audience about an accomplishment he is especially proud of: inspiring a young woman to pursue the sciences through his writing. He emphasized that writing popular science books for a general audience is a crucial method of inspiring young scientists.

“There was someone out there— someone who had the ability and passion to learn but didn’t even know that a career in physics existed,” he said.

Fermilab scientist emeritus Mike Albrow painted a picture of the night sky for his audience. The same night sky stirred him as both a child and adult, always creating, “a feeling of being all alone in the vast emptiness of it all.” He told the audience how much of a detriment light pollution was to the night sky and for kids (and adults) who wanted to look at the stars.

Visual artist and first-ever Fermilab artist-in-residence Lindsay Olson walked the audience through intermingling science and art—and how she fell in love with science in the middle of a waste water treatment plant. At Fermilab, despite feeling intimidated by high-energy physics, she relied on her curiosity to explore and then show through her art that you don’t need a PhD to be fascinated by physics.

Finally, Fermilab senior scientist Herman White described when a small and coincidental connection—his roots in Alabama—became a way for him to connect to people and share his science with them.

“Especially now, it’s incredibly important to connect the public to science and change their perception of it,” White said. “We need to relate to people on a human level.”

Joe notes that many scientists aren’t used to telling stories, but their stories are an opportunity both to convey the value of science and create relationships with people outside of the field. She highlights that science is part of everyone’s life, no matter where they come from or what they do for a living.

“The underlying theme is that science is human," she says. "We can all tell stories about science, no matter its role in our lives, by sharing our feelings, thoughts and background. And our stories as scientists are really just our stories as humans.”

The Story Collider at Fermilab