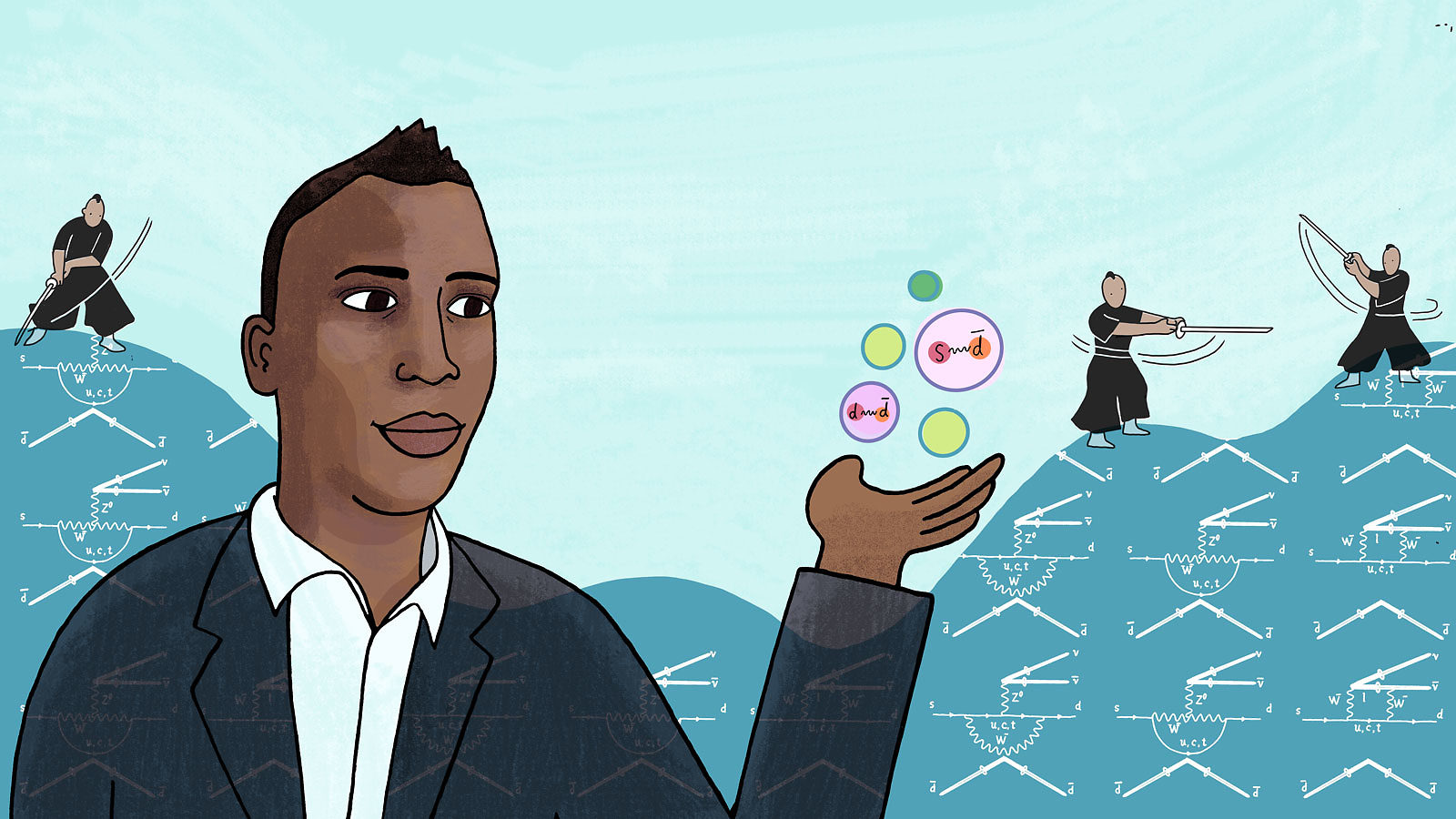 To mold the mind and body
To cultivate a vigorous spirit

So go the first two principles of the Japanese martial arts of kendo and iaido. For the last 20 years, physicist Brian Beckford has practiced these forms of Japanese swordsmanship not only as a way to find balance after long hours of research, but also as a philosophy that has guided him through life.

In kendo, “we begin and end with respect,” he says. “We are encouraged to learn from everyone: from the beginner and the seasoned practitioner. Do not dismiss the opportunity to learn and to be both welcoming and humble.”

Beckford says this attitude has brought him far. As a young boy in Jamaica, as a teenage immigrant in Miami, and as a college-dropout-turned-hotel-manager, he could not have imagined where it would take him and who he would be today: a nuclear/particle physicist fluent in Japanese, and a powerful advocate for the next generations.

“I want to tear down barriers,” he says. “I want to not only do fundamental research and expand our understanding of our universe—I want to be an inspiration for others who want to do that, too.”

From Jamaica to Miami

Until he was 9 years old, Beckford lived in Spanish Town, Jamaica, with his parents and brother. He remembers it fondly: He attended a prep school, and all of his positive role models—such as teachers and doctors—were black like him. The world seemed open. When he was four, he told his mother he wanted to be a scientist and invent something.

But then, his parents split, and he, his brother and his mother immigrated to Miami. Not only did his socioeconomic status change, he had to learn and adapt to a new culture, history and academic system.

“My mother was very open with us about what we would have to sacrifice,” he says. “But she was also very encouraging about what lay before us in Miami and how we should take advantage of opportunities.”

The faces of his role models changed, but Miami was home to many immigrants like him, and he found a new group friends from around the world.

One of those friends was encouraged by a teacher to apply to the newly formed public magnet school Design and Architecture Senior High. When Beckford asked the teacher if he should apply, too, the teacher said Beckford likely didn’t have the talent to get in.

“Then I was determined to prove that I could go because I was told I couldn’t,” Beckford says.

A nonlinear path to physics

He was accepted, and his aptitude in math led him to study engineering at Florida International University. But during his freshman year, he became disenchanted with what felt like a system that was holding him back. Driving around, he was pulled over again and again by police. Even though he was a student, he was told he wasn’t welcome in certain neighborhoods. “My response to that wasn’t the smartest,” he says. “I just stopped attending school and went off to work.”

He got a job at a hotel in Miami Beach, eventually working his way up to guest service manager. His mother, who had not attended college, “expressed her disappointment in me daily,” he says.

He decided he owed it to her to go back to school, and he re-enrolled at FIU while continuing to work to support himself. A philosophy course spurred questions about the nature of existence, and his professor suggested that if he wanted to understand how things worked, he should learn more about physics.

He found a mentor in physics professor Joerg Reinhold, who offered Beckford an opportunity to work in his lab as a research assistant. “It showed me that going to graduate school in physics was something I could do,” Beckford says.

Reinhold says he knew Beckford was special from the start. “He was one of the few students I worked with who, if we sat down to discuss something, he actually took notes about it and wrote everything out,” he says. “I always enjoyed working with him.” 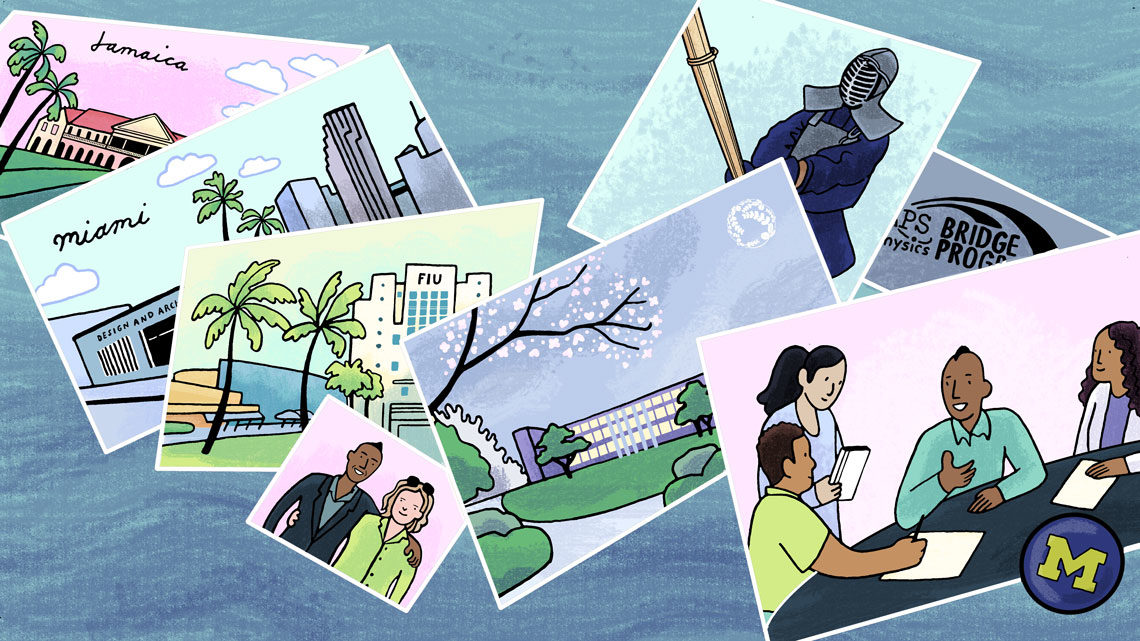 Finding a home in Japan

Beckford became a graduate student in Reinhold’s lab to work on hypernuclear physics experiments at Jefferson Lab, and then was introduced to a research collaboration with Tohoku University in Japan. It was a good fit for Beckford, who was already studying kendo and east Asian philosophy, and after spending a summer doing research there, he decided to apply to Tohoku’s Super Doctor Fellowship and earn his PhD in Japan. His research focused on studying how photon interactions with nucleons produced strange particles called kaons and lambdas at the university’s local accelerator.

In Japan, he found a welcoming culture. Instead of being a black American, he was considered just “non-Japanese.”

“I never once thought twice about wearing a hoodie because it was cold in Sendai,” he says.

He continued to study kendo and iaido and the Japanese language while conducting his research, putting in the kind of long days that Japanese work culture is known for.

But then his path took another turn. His adviser, Osamu Hashimoto, died from cancer. Not long after, the 2011 magnitude-9.0 earthquake off the coast of Tohoku damaged the beam line and shut down the university for almost a semester.

Beckford switched his focus to only researching the photoproduction of lambda particles instead, eventually earning his PhD in 2013.

“Getting a PhD in nuclear physics is a long and sometimes painful path,” Reinhold says. “And Brian did it in another country, in a completely different environment. I’ve seen a lot of other people fail trying to do this, but once Brian wants something, he has the patience and perseverance to get it.”

From researcher to advocate

Of the students who earn PhDs in physics each year, the number from underrepresented groups usually hovers between 6 and 8 percent. Beckford took that into consideration when deciding on his next step.

“I’ve never had a black instructor in physics,” Beckford says. “I started thinking about the challenges of inclusion and diversity in physics, the feelings of isolation.”

He saw an opening at the American Physical Society’s Bridge Program, which aims to increase the number of physics PhDs awarded to underrepresented minority students  and provides support structures for success. He got the job, and for the next two and a half years he served as a project manager, helping to establish Bridge program sites, expand the program, and place students into Bridge or graduate programs in physics.

He learned that improving the situation of underrepresented groups in the field requires addressing a whole slew of factors.

It starts with addressing factors that decrease the number of minority students in graduate programs. Many students from underrepresented groups apply to just one graduate school, often because they cannot afford the cost of multiple applications. Additionally, many schools require students to submit their score on the physics portion of the Graduate Record Examination (GRE) standardized test as part of their applications and use the scores as hard cut-off criteria. It has been shown that misuse of the physics GRE score in selecting applicants may be a factor in the continued underrepresentation of racial-ethnic minorities and women.

The complicating factors don’t end there. For one, if a physicist from an underrepresented group does make it through the gauntlet to become a faculty member, they are often disproportionally charged with helping with mentoring and diversity efforts, which can affect the time they spend on research and therefore their chances at tenure.

Despite the challenges, Beckford says he remains optimistic about increasing diversity in physics. After all, he says, physicists are the kind of people who spend years or decades designing and building experiments before they see any results.

“If we put the same effort into diversity that we do in experiments, we can solve this problem,” he says. “We can work on this difficult problem with the same passion we use toward scientific questions.”

Stepping into the unknown once more

After working for the APS Bridge Program, Beckford joined the KOTO experiment as a postdoctoral fellow at the University of Michigan in the fall of 2015 and went on to earn the President’s Postdoctoral Fellowship in 2017 under physics professor Myron Campbell, who calls Beckford “a first-rate physicist.”

The two worked together on the KOTO experiment performed at the J-PARC accelerator facility in Tokai, Japan, which aims to measure the direct CP-violating rare decay of the neutral kaon into a neutral pion and a neutrino anti-neutrino pair. The results could help explain why there is more matter than antimatter in the universe, but the decay is predicted in 1 out of every 30 billion kaon decays and requires large data sets to observe and measure. KOTO set and established the best experimental upper limit in the decay earlier this year.

As a postdoc, Beckford mentored a diverse group of undergraduate students, Campbell notes. “I’m confident that what made the underrepresented minority students comfortable working in our group was Brian,” he says. “He has had to navigate that experience, and he helps others navigate it as well.”

Now, Beckford is an assistant research scientist at the University of Michigan applying for tenure-track positions. Where his path will take him next is unclear, but he’s used to that. “In no way did I envision this is what I would be doing when I moved to the United States,” he says. “Twists and turns, high points and low points. There have been very difficult times when I was uncertain if I could be successful. But you grow by learning, by stepping out into the unknown. I value all of it.”

He still practices kendo and iaido several days a week and has achieved a level of 5 dan (black belt level) in both. “It’s not an escape,” he says. “It allows me to persevere, and I use that resilience in other parts of my life.”