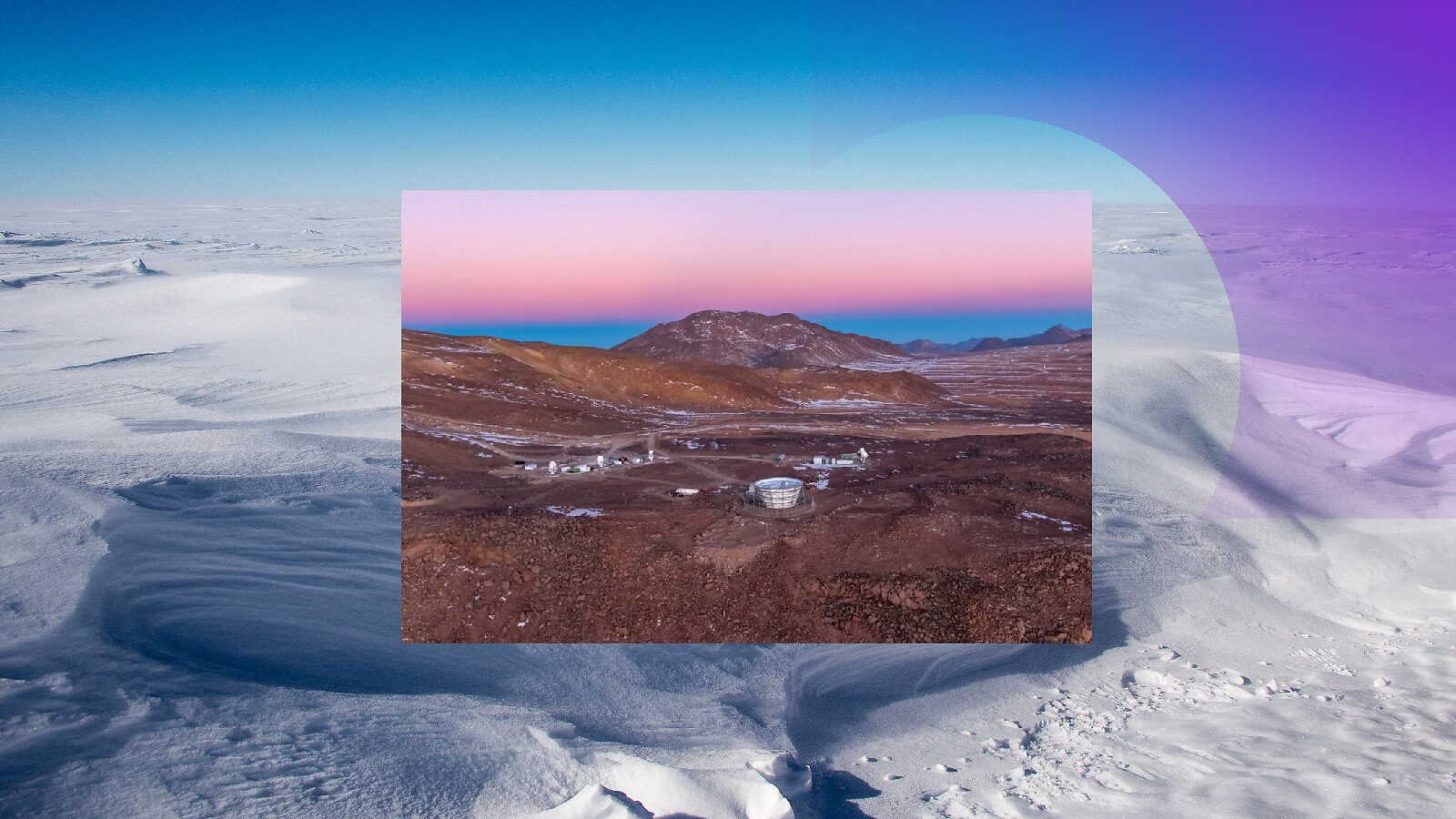 In the 1960s, an anomalous, faint electromagnetic glow was observed across the entire sky. Physicists later determined that the light came from the very early universe, released when the first atoms formed shortly after the Big Bang.

We now call this relic radiation the cosmic microwave background, or CMB. Studying it is one of the highest priority pursuits in cosmology.

“We’re going back to look for physics from the dawn of time and test the model for how our whole universe was created.”

“The fantastic thing about these [photons] is they have experienced the entire history of the universe,” says Julian Borrill, a senior scientist at the US Department of Energy’s Lawrence Berkeley National Laboratory. “And everything that has ever happened in the universe has left a tiny imprint on those photons; it’s changed their distribution and their energies slightly in all kinds of subtle ways.

“If we can measure them with enough precision and understand their statistics, we can tease out the entire history of the universe.”

Many experiments, both space- and ground-based, are already studying the CMB. Now scientists are developing plans for an ambitious project that would multiply by 10 the sensitivity of all these searches combined.

Called Cosmic Microwave Background-Stage 4, the project would comprise an array of small- and large-aperture telescopes deployed in Chile and at the South Pole. Building it would require unprecedented cooperation between two funding agencies and three scientific communities: astronomy, particle physics and polar science.

If scientists can pull it off, CMB-S4 will connect a sandy desert with a polar desert to address major astronomical questions.

“We’re going back to look for physics from the dawn of time and test the model for how our whole universe was created,” says John Carlstrom, a CMB-S4 project scientist and professor at the University of Chicago. “From that, we also learn a great deal about what’s in the universe, how it evolved from these quantum fluctuations to all the structure we see.

“We’re developing the full story of the universe from its infancy and creation to the present day.”

For many of the over 400 scientists across 121 worldwide institutions who are part of the CMB-S4 collaboration, the most intriguing goal of the experiment is its search for evidence of cosmic inflation.

Cosmic inflation is a hypothetical event in which the universe rapidly expanded. “We think that inflation is one of the many hints for resolving the inconsistency between our two great theories of physics,” general relativity and quantum mechanics, says Borrill, who serves as the CMB-S4 project data scientist.

Cosmic inflation would also explain, among other things, why areas of the universe that otherwise should not have ever been close enough together to affect one another still seem suspiciously similar.

The inflation process should have released gravitational waves, fluctuations in space-time that CMB-S4 is designed to detect.

Either detecting or ruling out the presence of primordial gravitational waves “would be a huge advance for our knowledge of the universe,” says Jeff McMahon, an associate professor at the University of Chicago and co-spokesperson for the CMB-S4 collaboration.

But an experiment of this scale and sensitivity would have the potential to do much more, including discover unknown subatomic particles from the early universe, explore the nature of dark matter and dark energy, map the matter in the cosmos, and capture transient phenomena in the microwave sky.

“I think the richness of the dataset means that it’s going to lead us in new directions, and those directions could be something new and exciting,” McMahon says. “I think there’s room for surprises.”

CMB-S4 is planning to place an array of microwave telescopes at two sites that have been vetted for their scientific value: the Atacama Plateau in Chile and the South Pole. The Simons Observatory, under construction in Chile, and the South Pole Observatory, operating in Antarctica, are among precursor “Stage-3” CMB experiments that could provide a solid basis for the development of CMB-S4.

To fulfill some of CMB-S4’s scientific goals, scientists will need to look at the same patch of sky for a long time, and the South Pole is conveniently oriented for this, as its view of the sky changes very little over the course of the year. Scientists plan to host at least 9 small-aperture telescopes 0.5 meters in diameter and one 5-meter large-aperture telescope at CMB-S4’s South Pole site to conduct an ultra-deep survey of 3% of the sky.

Other goals require scientists to collect data from a very large area of sky; the Chile site is well suited for this. At the CMB-S4 site in the Chilean Atacama Desert, scientists plan to use two 6-meter large-aperture telescopes to conduct a deep and wide survey of 70% of the sky.

The CMB-S4 collaboration plans to use hundreds of thousands of superconducting bolometers as their detectors. “The thing that makes these experiments sensitive is the number of detectors that they have in their focal plane,” says Kevin Huffenberger, a professor at Florida State University and co-spokesperson for the CMB-S4 collaboration. “[Even with] a better detector, you’re still looking through the same atmosphere, so it doesn’t really help… You have to build more detectors so that you can average down the atmosphere over more detectors.”

The design for CMB-S4, he says, offers “a big step up in the sensitivity, which allows it to do things that the other experiments couldn’t.”

Three major studies have endorsed CMB-S4. It was recommended in 2014 by the Particle Physics Project Prioritization Panel, which outlines priorities for US particle physics; in 2015 by the National Academies report A Strategic Vision for NSF Investments in Antarctic and Southern Ocean Research, which defines the goals for the National Science Foundation Office of Polar Programs; and in November 2021 by the National Academies report Pathways to Discovery in Astronomy and Astrophysics, which outlines priorities for US astronomy and astrophysics in the coming decade.

The CMB-S4 team is planning for the project to be a partnership between the National Science Foundation and the US Department of Energy. In 2019, DOE formally established the scientific need for CMB-S4, and in 2020 it designated Lawrence Berkeley National Lab as the host laboratory. The funding agencies require additional reviews before approving the start of construction.

The seemingly slow progress is not unusual for an endeavor of this size, according to those involved. It’s a big project, and it takes a lot of time for the agencies to ensure that the project is well justified, says Huffenberger.

Marcelle Soares-Santos, an assistant professor at the University of Michigan and a convener of the group that focused on astrophysics at Snowmass2021, is also unsurprised at the pace. “We all would like it to go faster, but I think it’s not unexpected to be at this stage,” she says. “There’s a reason why it requires support from the entire community—because it requires knowledge and expertise and resources that come from different corners of the community.”

The CMB-S4 team must also consider the allocation of the limited resources available at the NSF-managed South Pole Station, which due to its remoteness and the extreme cold, is only accessible for a few months a year. To optimally match the capabilities of CMB-S4 to the logistical constraints of deploying and operating the telescopes at the South Pole, the balance between the number of telescopes placed at each site is currently being reexamined through an “analysis of alternatives,” one of the many agency requirements before considering and approving the project for construction.

“We’re going over the different changes to the instrument configurations we could make that would still meet our instrument requirements [in order] to understand what fits best within the logistical footprint—for the South Pole Station especially, but also the project overall,” McMahon says.

That process should wrap up this year, he says, “then we should be ready to seek funding to move forward toward the next stages of design and then construction, with operations in the early 2030s.”