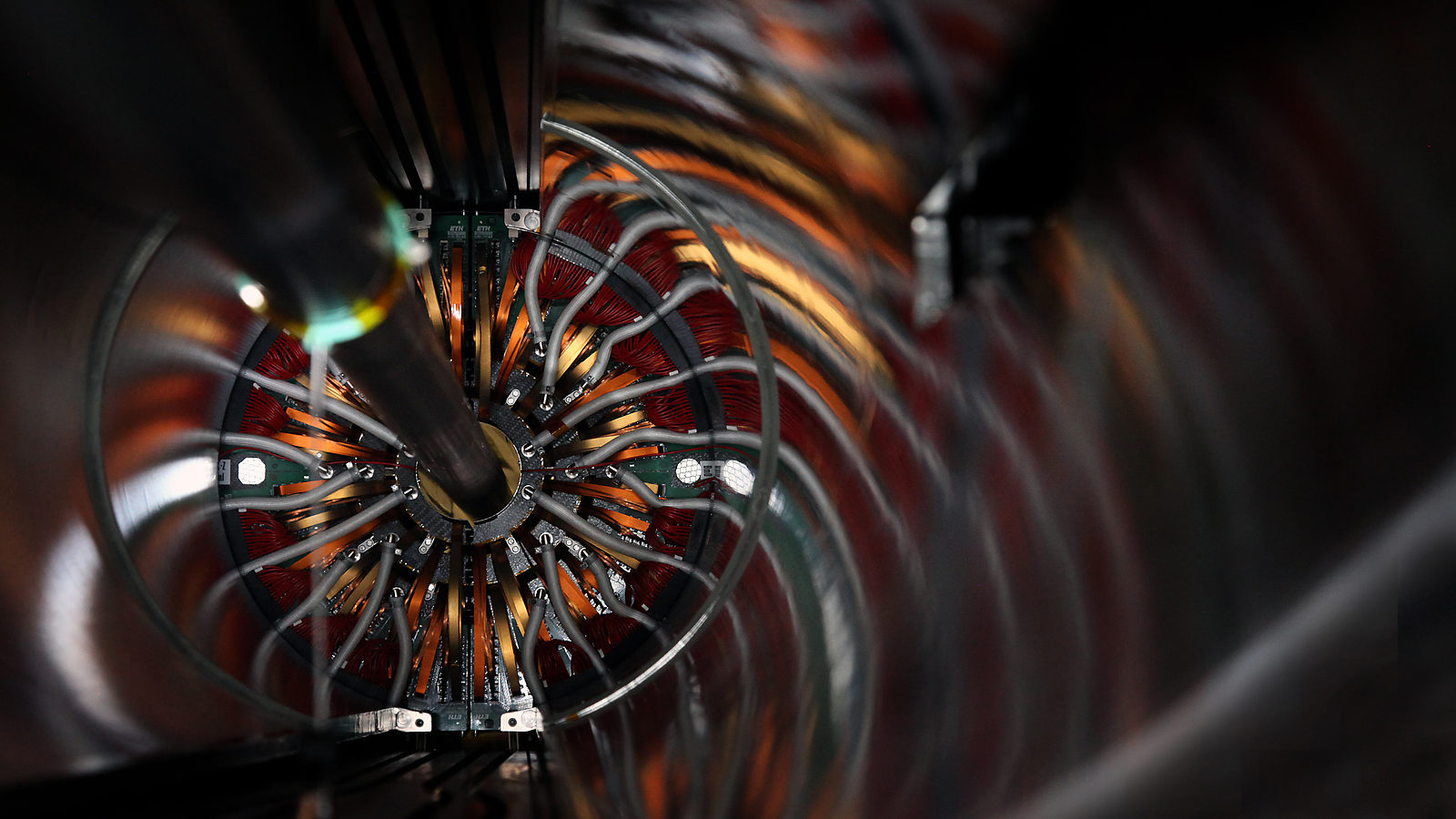 The Large Hadron Collider is the world’s most powerful particle accelerator. It accelerates and smashes protons and other atomic nuclei to study the fundamental properties of matter.

When the answer to that question involves rarely seen, massive particles, it gives scientists a unique way to study the Higgs boson.

Protons are not solid spheres, but composite particles containing even tinier components called quarks and gluons. “As far as we know the quarks and gluons are point-like particles with no internal structure,” says Aram Apyan, a research associate at the US Department of Energy’s Fermi National Accelerator Laboratory.

According to Apyan, two quarks cannot actually hit each other; they don’t have volume or surfaces. So what really happens when these point-like particles collide?

“When we talk about two quarks colliding, what we really mean is that they are very close to each other spatially and exchanging particles,” says Richard Ruiz, a theorist at Université Catholique de Louvain in Belgium. “Namely, they exchange force-carrying bosons.”

All elementary matter particles (like quarks and electrons) communicate with each other through bosons. For instance, quarks know to bind together by throwing bosons called gluons back and forth, which carry the message, “Stick together!”

The lion’s share of LHC collisions happen when two passing energetic gluons meet, fuse and then transform into all sorts of particles through the wonders of quantum mechanics.

Gluons carry the strong force, which pulls quarks together into particles like protons and neutrons. Gluon-gluon collisions are so powerful that the protons they are a part of are ripped apart and the original quarks in those protons are consumed.

In extremely rare instances, colliding quarks can also interact through a different force: the weak force, which is carried by the massive W and Z bosons. The weak force arbitrates all nuclear decay and fusion, such as when the protons in the center of the sun are squished and squeezed into helium nuclei.

The weak force passes the message, “Time to change!’’and inspires quarks to take on a new identity–for instance, change from a down quark to an up quark or vice versa.

Although it may seem counterintuitive, the W and Z bosons that carry the weak force are extremely heavy–roughly 80 times more massive than the protons the LHC smashes together. For two minuscule quarks to produce two enormous W or Z bosons simultaneously, they need access to a big pot of excess energy.

That’s where the LHC comes in; by accelerating protons to nearly the speed of light, it produces the most energetic collisions ever seen in a particle accelerator. “The LHC is special,” Ruiz says. “The LHC is the first collider in which we have evidence of W and Z  boson scattering; the weak force bosons themselves are colliding.”

Even inside the LHC, weak force boson-boson collisions are extremely rare. This is because the range of the weak force extends to only about 0.1% of the diameter of a proton. (Compare this to the range of the strong force, which is equivalent to the proton’s diameter.)

“This range is quite small,” Apyan says. “Two quarks have to be extremely close and radiate a W or Z boson simultaneously for there to be a chance of the bosons colliding.”

Apyan studies collisions in which two colliding quarks simultaneously release a W or Z boson, which then scatter off one another before transforming into more stable particles. Unlike other processes, the W and Z boson collisions maintain their quarks, which then fly off into the detector as the proton falls apart. “This process has a nice signature,” Apyan says. “The remnants of the original quarks end up in our detector, and we see them as jets of particles very close to the beampipe.”

The probability of this happening during an LHC collision is about one in a trillion. Luckily, the LHC generates about 600 million proton-proton collisions every second. At this rate, scientists are able to see this extremely rare event about once every other minute when the LHC is running.

These heavy boson-boson collisions inside the LHC provide physicists with a unique view of the subatomic world, Ruiz says.

Creating and scattering bosons allows physicists to see how their mathematical models hold up under stringent experimental tests. This can allow them to search for physics beyond the Standard Model.

Even small tweaks to the Higgs field could have major implications for the properties of Z and W bosons and how they ricochet off each other. By studying how these particles collide inside the LHC, scientists are able to open yet another window into the properties of the Higgs.