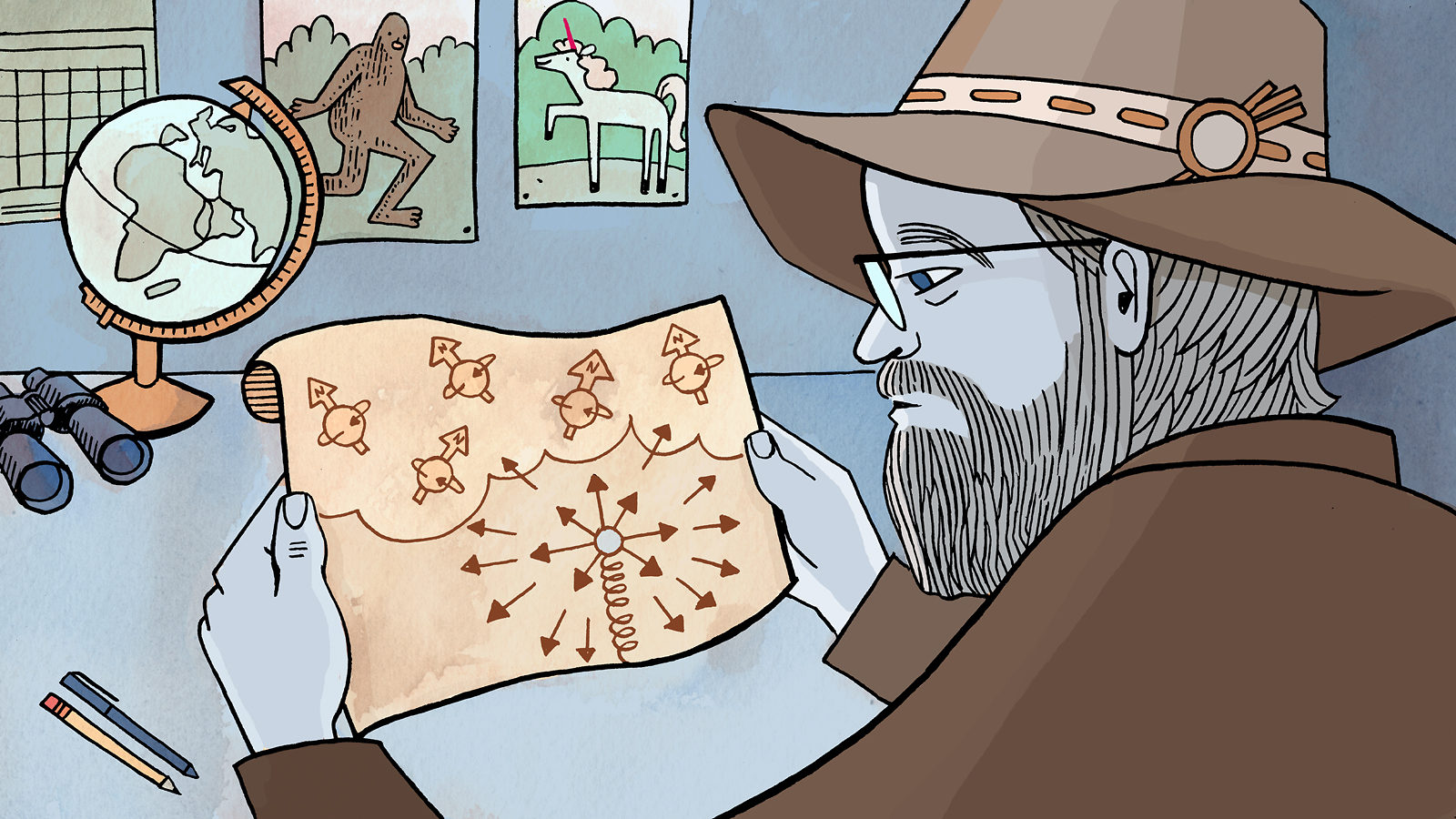 The hunt for the truest north

Many theories predict the existence of magnetic monopoles, but experiments have yet to see them.

If you chop a magnet in half, you end up with two smaller magnets. Both the original and the new magnets have “north” and “south” poles.

But what if single north and south poles exist, just like positive and negative electric charges? These hypothetical beasts, known as “magnetic monopoles,” are an important prediction in several theories.

Like an electron, a magnetic monopole would be a fundamental particle. Nobody has seen one yet, but many—maybe even most—physicists would say monopoles probably exist.

“The electric and magnetic forces are exactly the same force,” says Wendy Taylor of Canada’s York University. “Everything would be totally symmetric if there existed a magnetic monopole. There is a strong motivation by the beauty of the symmetry to expect that this particle exists.” 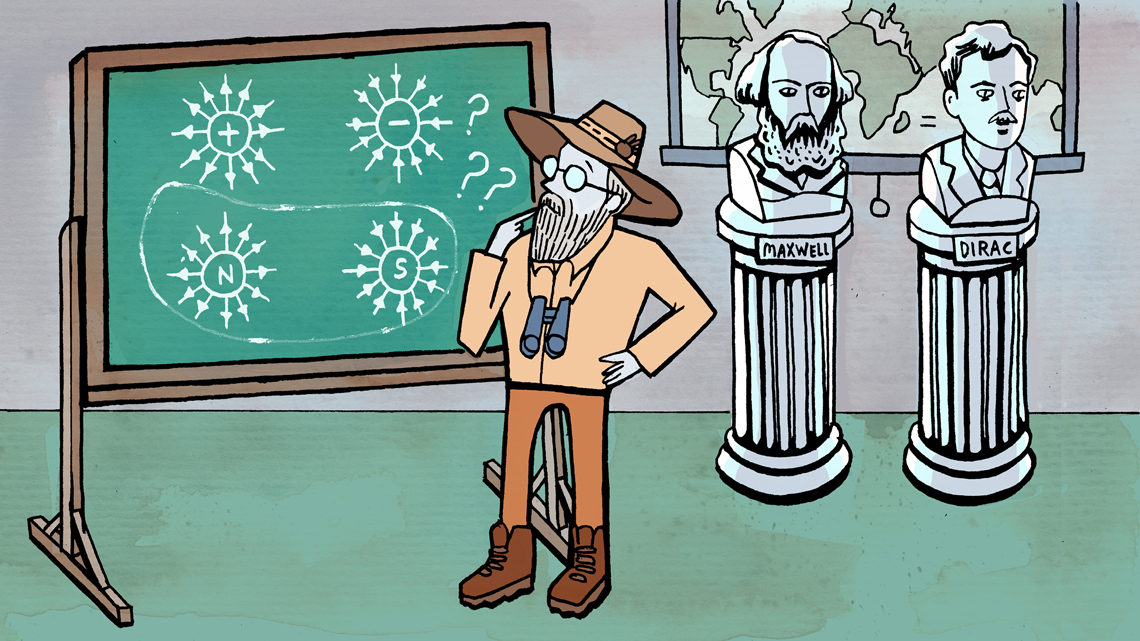 Dirac to the future

Combining the work of many others, nineteenth-century physicist James Clerk Maxwell showed that electricity and magnetism were two aspects of a single thing: the electromagnetic interaction.

But in Maxwell’s equations, the electric and magnetic forces weren’t quite the same. The electrical force had individual positive and negative charges. The magnetic force didn’t. Without single poles—monopoles—Maxwell’s theory looked asymmetrical, which bugged him. Maxwell thought and wrote a lot about the problem of the missing magnetic charge, but he left it out of the final version of his equations.

Quantum pioneer Paul Dirac picked up the monopole mantle in the early 20th century. By Dirac’s time, physicists had discovered electrons and determined they were indivisible particles, carrying a fundamental unit of electric charge.

Dirac calculated the behavior of an electron in the magnetic field of a monopole. He used the rules of quantum physics, which say an electron or any particle also behaves like a wave. For an electron sitting near another particle—including a monopole—those rules say the electron’s wave must go through one or more full cycles wrapping around the other particle. In other words, the wave must have at least one crest and one trough: no half crests or quarter-troughs.

For an electron in the presence of a proton, this quantum wave rule explains the colors of light emitted and absorbed by a hydrogen atom, which is made of one electron and one proton. But Dirac found the electron could only have the right wave behavior if the product of the monopole magnetic charge and the fundamental electric charge carried by an electron were a whole number. That means monopoles, like electrons, carry a fundamental, indivisible charge. Any other particle carrying the fundamental electric charge—protons, positrons, muons, and so forth—will follow the same rule.

Interestingly, the logic runs the other way too. Dirac’s result says if a single type of monopole exists, even if that type is very rare, it explains a very important property of matter: why electrically charged particles carry multiples of the fundamental electric charge. (Quarks carry a fraction—one-third or two-thirds—of the fundamental charge, but they always combine to make whole-number multiples of the same charge.) And if more than one type of monopole exists, it must carry a whole-number multiple of the fundamental magnetic charge. 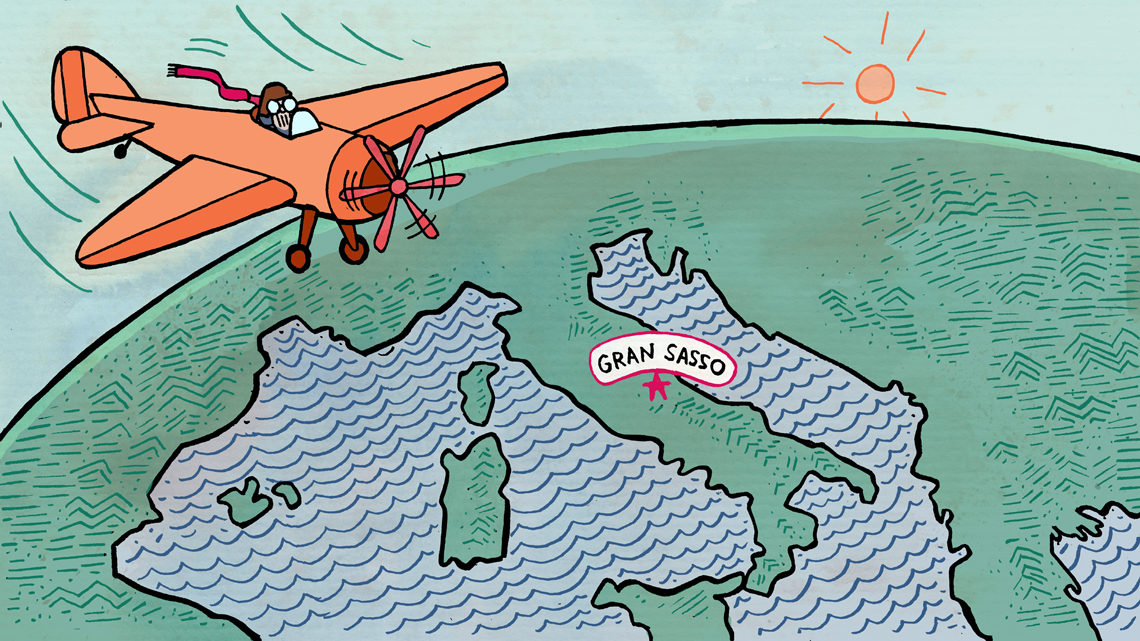 Dirac’s discovery was really a plausibility argument: If monopoles existed, they would explain a lot, but nothing would crumble if they didn’t.

Since Dirac’s day, many theories have made predictions about the properties of magnetic monopoles. Grand unified theories predict monopoles that would be over 10 quadrillion times more massive than protons.

Producing such particles would require more energy than Earthly accelerators can reach, “but it’s the energy that was certainly available at the beginning of the universe,” says Laura Patrizii of the Italian National Institute for Nuclear Physics.

Cosmic ray detectors around the world are looking for signs of these monopoles, which would still be around today, interacting with molecules in the air. The MACRO experiment at Gran Sasso in Italy also looked for primordial monopoles, and provided the best constraints we have at present.

Luckily for scientists like Patrizii and Taylor, grand unified theories aren’t the only ones to predict monopoles. Other theories predict magnetic monopoles of lower masses that could feasibly be created in the Large Hadron Collider, and of course Dirac’s original model didn’t place any mass constraints on monopoles at all. That means physicists have to be open to discovering particles that aren’t part of any existing theory.

Both of them look for monopoles created at the Large Hadron Collider, Patrizii using the MoEDAL detector and Taylor using ATLAS.

“I think personally there's lots of reasons to believe that monopoles are out there, and we just have to keep looking,” Taylor says.