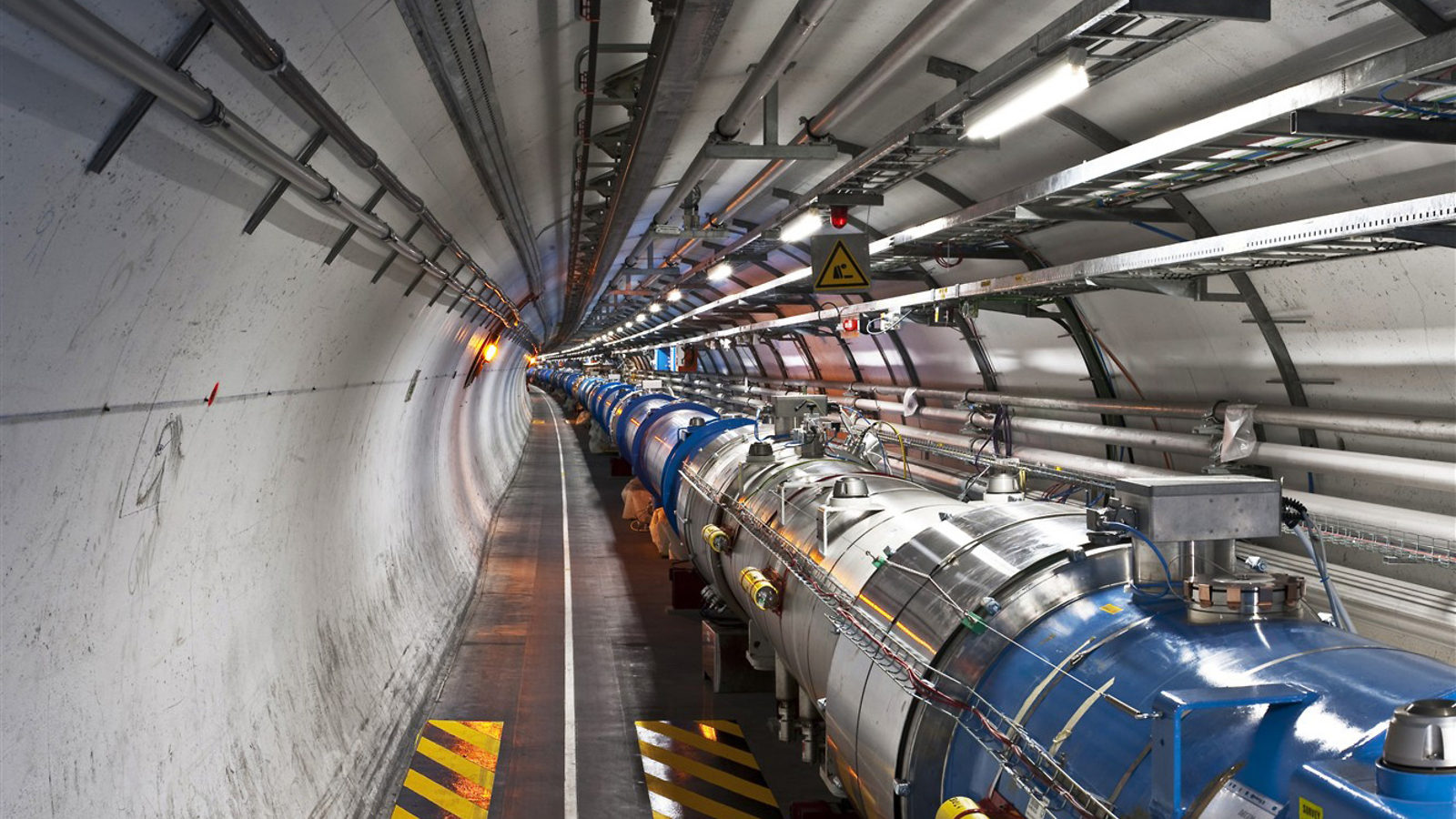 Higgs bosons are born in a blob of pure concentrated energy and live only one-septillionth of a second before decaying into a cascade of other particles. In 2012, these subatomic offspring were the key to the discovery of the Higgs boson.

So-called daughter particles stick around long enough to show up in the CMS and ATLAS detectors at the Large Hadron Collider. Scientists can follow their tracks and trace the family trees back to the Higgs boson they came from.

But the particles that led to the Higgs discovery were actually some of the boson’s less common progeny. After recording several million collisions, scientists identified a handful of Z bosons and photons with a Higgs-like origin. The Standard Model of particle physics predicts that Higgs bosons produce those particles 2.5 and 0.2 percent of the time. Physicists later identified Higgs bosons decaying into W bosons, which happens about 21 percent of the time.

According to the Standard Model, the most common decay of the Higgs boson should be a transformation into a pair of bottom quarks. This should happen about 60 percent of the time.

The strange thing is, scientists have yet to discover it happening (though they have seen evidence).

According to Harvard researcher John Huth, a member of the ATLAS experiment, seeing the Higgs turning into bottom quarks is priority No. 1 for Higgs boson research.

“It would behoove us to find the Higgs decaying to bottom quarks because this is the largest interaction,” Huth says, “and it darn well better be there.”

If the Higgs to bottom quarks decay were not there, scientists would be left completely dumbfounded.

“I would be shocked if this particle does not couple to bottom quarks,” says Jim Olsen, a Princeton researcher and Physics Coordinator for the CMS experiment. “The absence of this decay would have a very large and direct impact on the relative decay rates of the Higgs boson to all of the other known particles, and the recent ATLAS and CMS combined measurements are in excellent agreement with expectations.”

To be fair, the decay of a Higgs to two bottom quarks is difficult to spot.

When a dying Higgs boson produces twin Z or W bosons, they each decay into a pair of muons or electrons. These particles leave crystal clear signals in the detectors, making it easy for scientists to spot them and track their lineage. And because photons are essentially immortal beams of light, scientists can immediately spot them and record their trajectory and energy with electromagnetic detectors.

But when a Higgs births a pair of bottom quarks, they impulsively marry other quarks, generating huge unstable families which bourgeon, break and reform. This chaotic cascade leaves a messy ancestry.

Scientists are developing special tools to disentangle the Higgs from this multi-generational subatomic soap opera. Unfortunately, there are no cheek swabs or Maury Povich to announce, Higgs, you are the father! Instead, scientists are working on algorithms that look for patterns in the energy these jets of particles deposit in the detectors.

“The decay of Higgs bosons to bottom quarks should have different kinematics from the more common processes and leave unique signatures in our detector,” Huth says. “But we need to deeply understand all the variables involved if we want to squeeze the small number of Higgs events from everything else.”

Physicist Usha Mallik and her ATLAS team of researchers at the University of Iowa have been mapping the complex bottom quark genealogies since shortly after the Higgs discovery in 2012.

“Bottom quarks produce jets of particles with all kinds and colors and flavors,” Mallik says. “There are fat jets, narrow gets, distinct jets and overlapping jets. Just to find the original bottom quarks, we need to look at all of the jet’s characteristics. This is a complex problem with a lot of people working on it.”

This year the LHC will produce five times more data than it did last year and will generate Higgs bosons 25 percent faster. Scientists expect that by August they will be able to identify this prominent decay of the Higgs and find out what it can tell them about the properties of this unique particle.