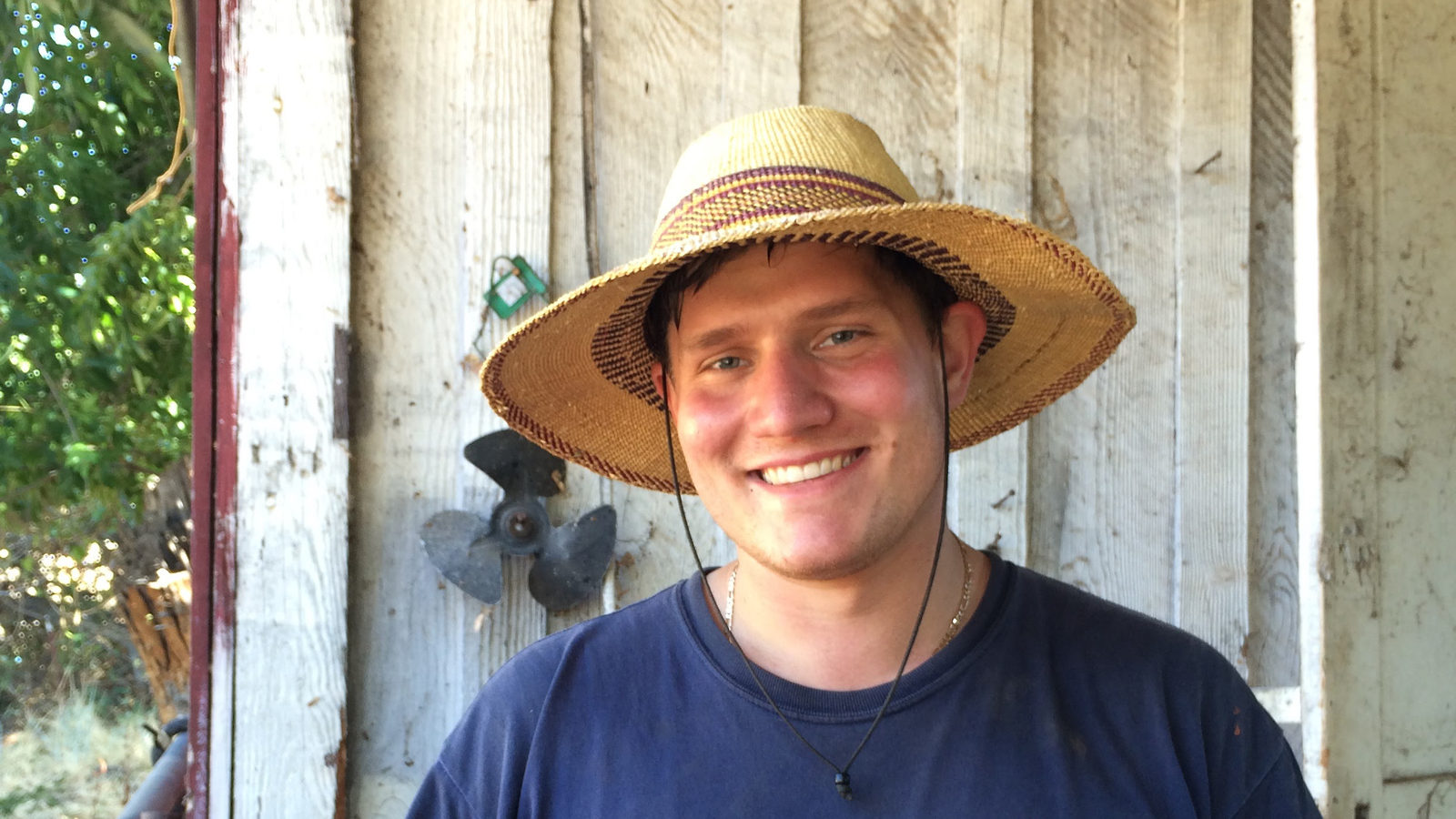 If you want to visit the Pasner family farm, you’ll need a truck with four-wheel drive. You’ll need to traverse 4 miles of bumpy dirt road deep into the countryside of Penn Valley, California. But once you arrive, you’ll be greeted by fields of organic onions and garlic, nestled between rolling grassy hills speckled with oak trees. For physicist Jake Pasner, this will always be home.

“I was born on the top floor of that house,” says Pasner, who grew up fixing tractors and picking figs. Now as a physics graduate student at the University of California, Santa Cruz, he’s building detector components and cultivating complex code for the ATLAS experiment at the Large Hadron Collider at CERN.

Growing up, Pasner didn’t play video games or watch television. Rather, he would play with earthworms and inspect bugs while working in the fields with his family.

For Pasner, working on the family farm was a natural bridge into physics. He marveled at the natural world and would pepper his dad with questions. When his dad no longer had the answers, he did his own research. In middle school, he fixed the alternator on one of their big tractors. It made him curious enough about electricity to explore the topic for his eighth grade science fair.

“My dad knew how to build [the alternator], but he didn’t exactly know why it worked,” he says. “So I got a book from the library about how to generate electricity.”

Eventually, Pasner reached the point where even books didn’t have the answers to his questions. So he decided to investigate them for himself by pursuing a PhD in particle physics.

Pasner knew that earning a PhD would be challenging, but it was actually adjusting to the culture within academia that he found the most difficult.

For most scientists, getting their PhD coincides with another extremely difficult period in life: the transition from adolescence into adulthood. While Pasner was looking for answers to some of the biggest fundamental question in physics, he also found himself confronted with fundamental questions about his place in the world. Between the highs of snowboarding in the Alps with the CERN ski club and discussing physics analyses with colleagues over Friday night beers, a recalcitrant loneliness set in.

“Moving to Europe broadened my horizons,” he says. “But I missed my family’s traditions and the farming community.” 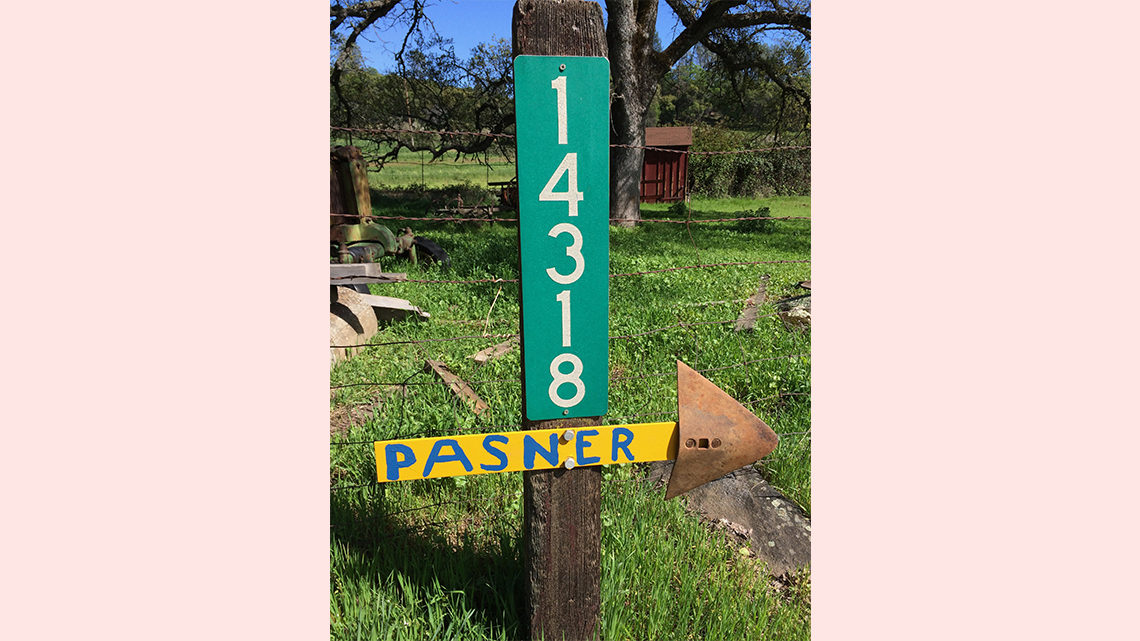 Signpost on the Pasner farm 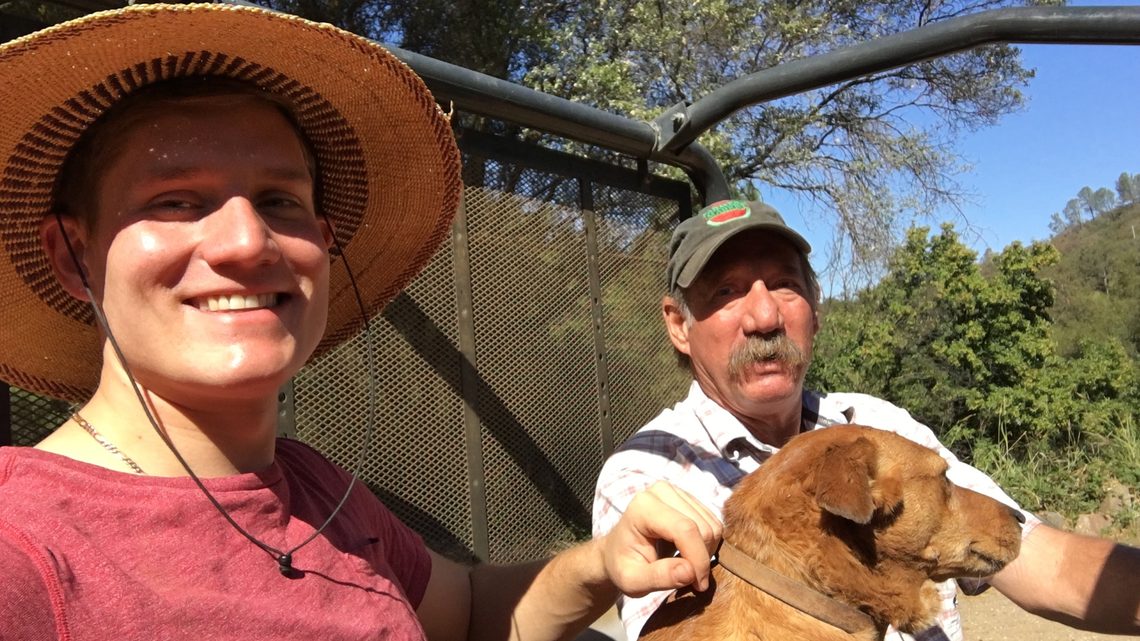 Pasner and his father at home 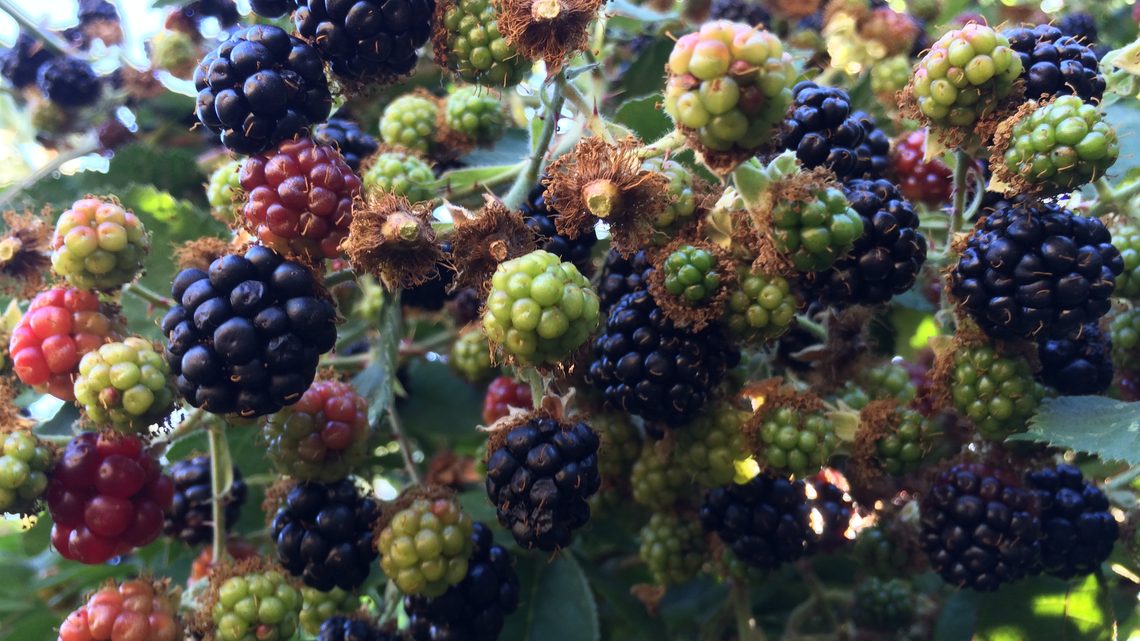 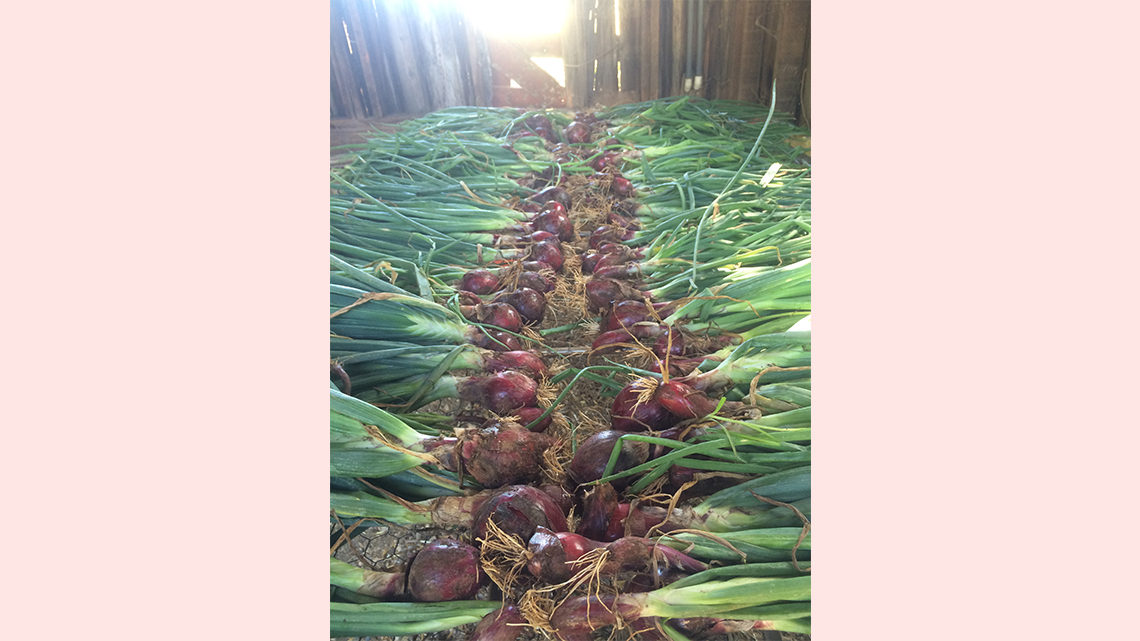 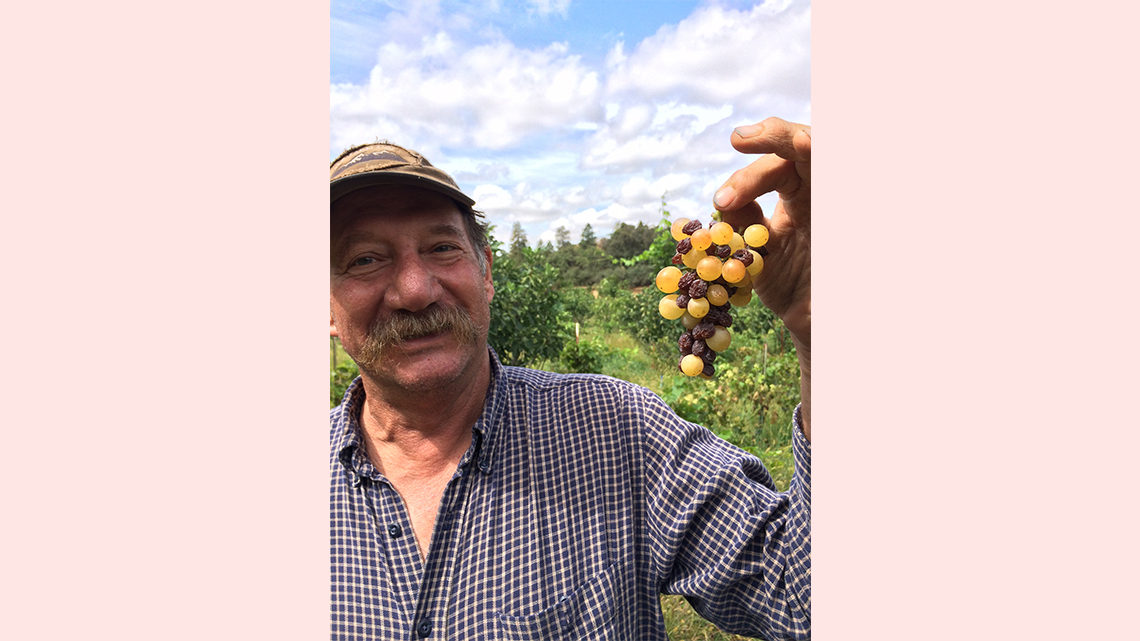 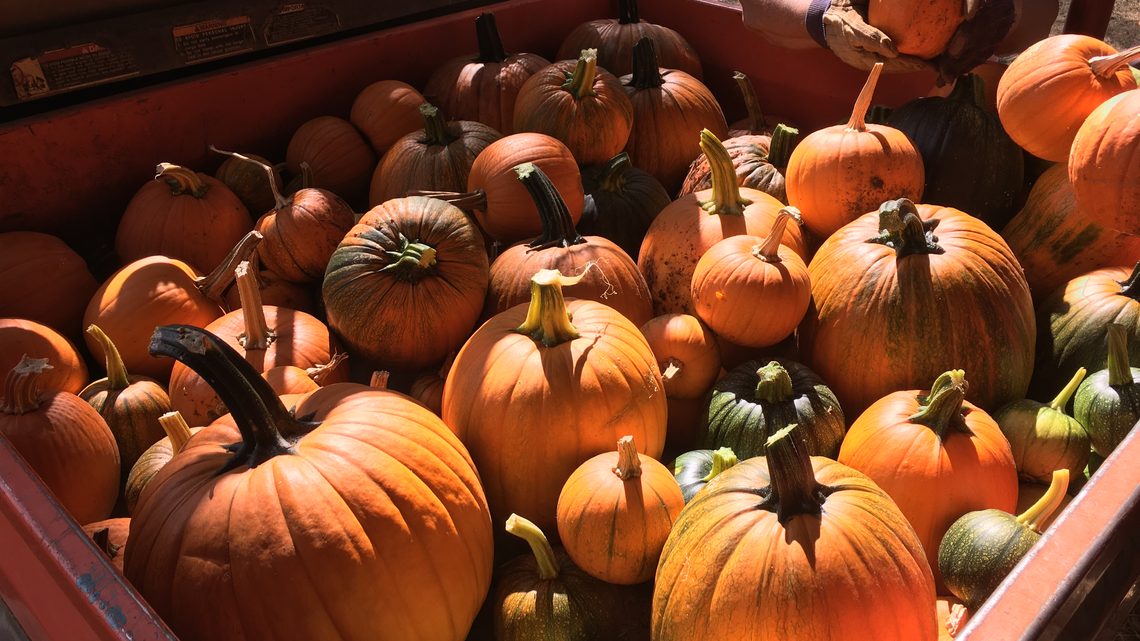 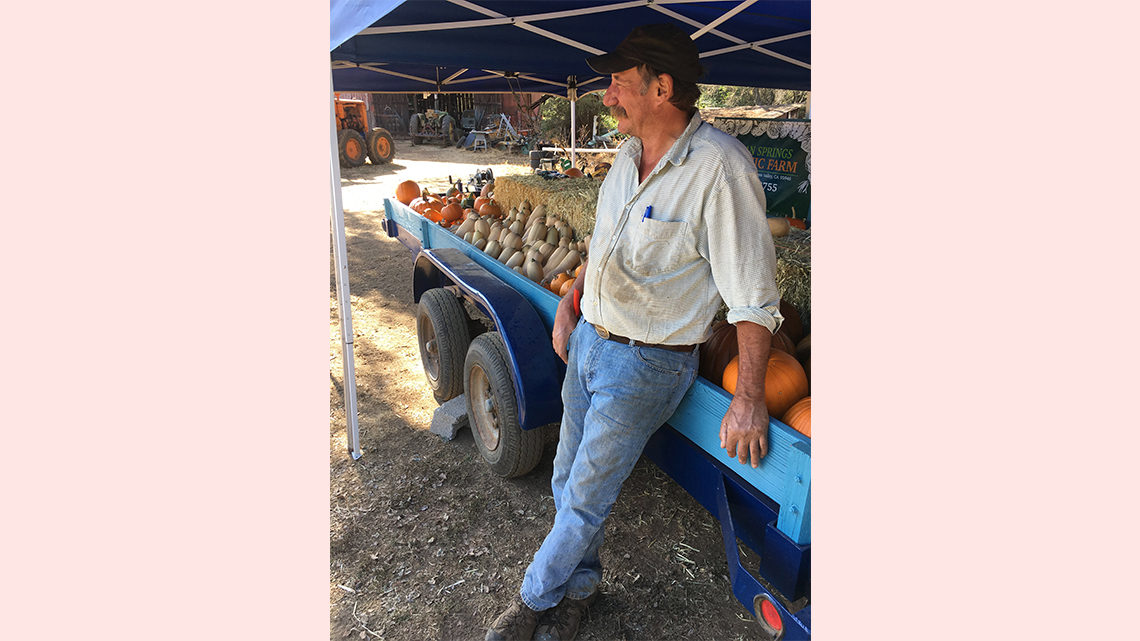 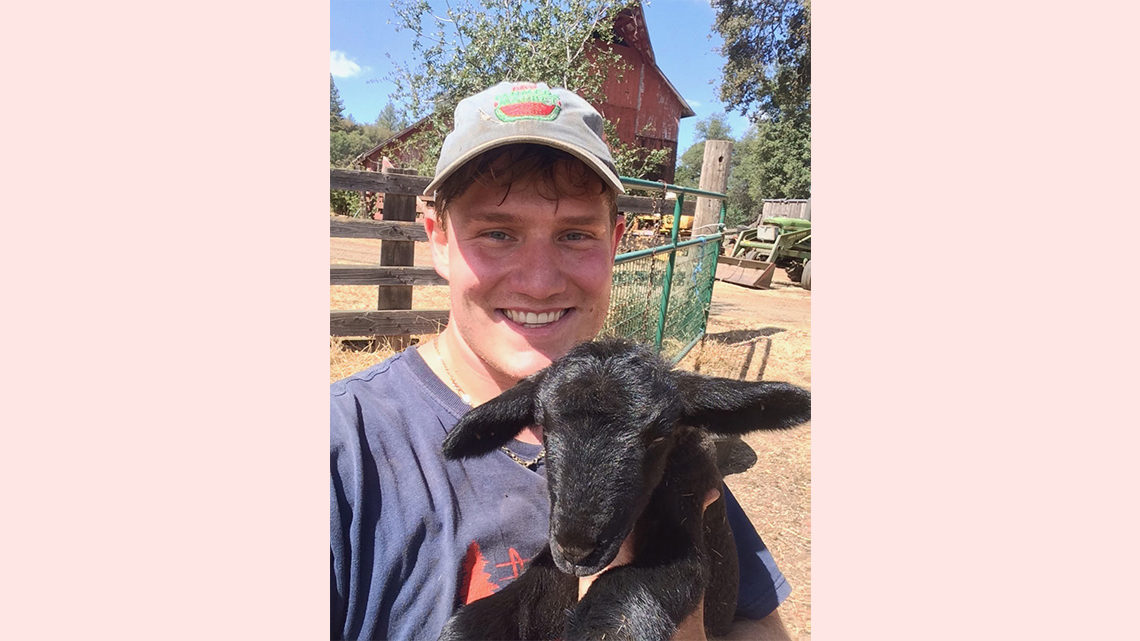 Pasner with a goat on the farm

Courtesy of Jake Pasner
Previous Next

At the same time, Pasner couldn’t ignore the increasing distance between himself and the people back home. “Many of them are raising families in the same town we grew up in,” he says. “We’ve had such different life experiences and just don’t see the world the same way.”

When Pasner came home to visit his dad, they would return to the familiar routine of long days working on the farm. During this time, Pasner would talk to his dad as he always had. But slowly conversations that started with updates about the onion harvest, what fences needed fixing and how many eggs the chickens were laying evolved into discussions about physics.

Pasner explained general relativity and the concept of planets warping spacetime by describing marbles deforming the surface of a stretched piece of plastic with their weight. He talked to his dad about the scale of the ATLAS experiment and how this enormous particle detector used many of the same principles as a digital camera. Pasner even explained how that alternator they fixed all those years ago wasn’t all that different from the LHC’s magnets; both use coils of wire to swing electrons in a circle and generate a magnetic field.

Pasner’s dad’s curiosity about CERN and this strange world of particle physics grew. In February 2018, he finally made the long journey across the Atlantic Ocean to see the ATLAS experiment for himself. It was his longest trip away from the farm since his international travels as a young adult in the mid-1970s.

“We were walking around Restaurant 1 on a Friday night, and he saw people from all over the world, speaking all sorts of languages,” Pasner says. “My dad is the kind of person who needs to see something to understand it, and I think visiting CERN and seeing ATLAS made him realize just how big and important this project is.

“My dad is very emotionally reserved, but I think it humbled him. And I think that it helped me a lot to see him there—this farmer from Penn Valley here with me at CERN. It made me realize how our obsession with understanding the beauty of nature can sometimes make us forget about things which are equally important, like the beauty of family.”

Through his evolving relationship with his dad, Panser was able to gradually build a small bridge between his childhood as a farm kid and his adulthood as a physicist. And it made him realize something: “There are curious people everywhere,” he says. “These principles of science aren’t just for us; they’re for everyone. As physicists, we need to be patient and humble. We need to want to bring people into our world and encourage them so that they can enjoy science too.”

Since his dad’s visit in February, Pasner has moved back to California to finish his PhD at UC Santa Cruz. He’s started working more in outreach through his university.

“People’s lives are better when they can understand and appreciate how the world around them works,” he says, “but not everyone feels like science is for them. How can we bridge this gap and make scientific thinking and principles accessible to more people?”

Pasner says he is looking at ways to make science advocacy a career. But there’s something else he needs to do first:

“After I graduate, I plan to spend a few months rebuilding the deer fence on the farm,” he says. “My dad’s starting to get up there in age and could use a hand.” 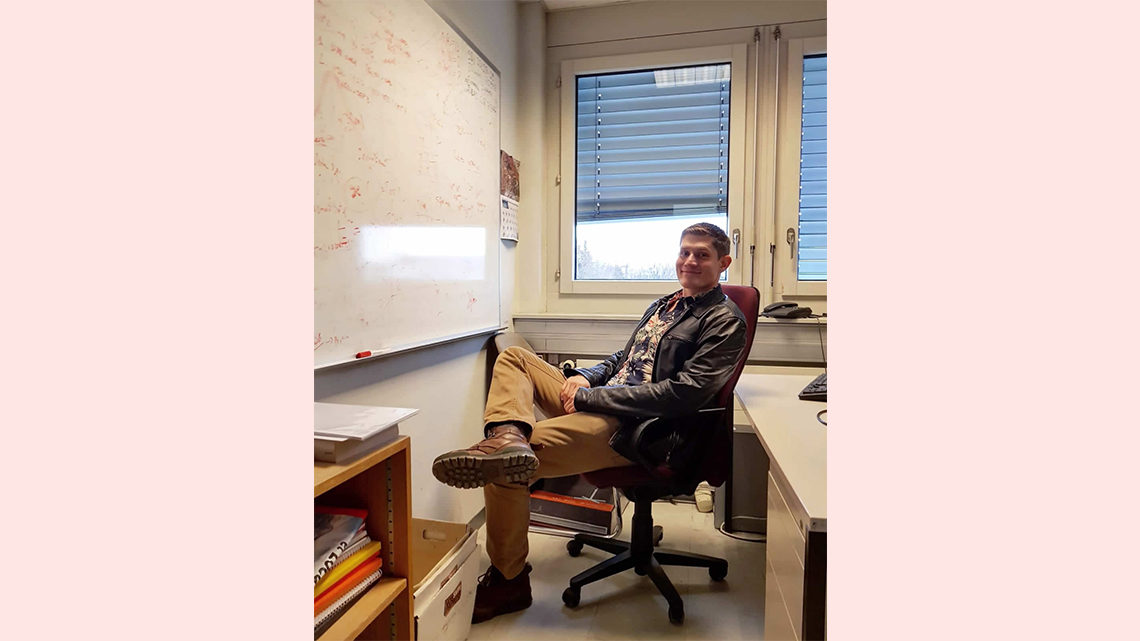 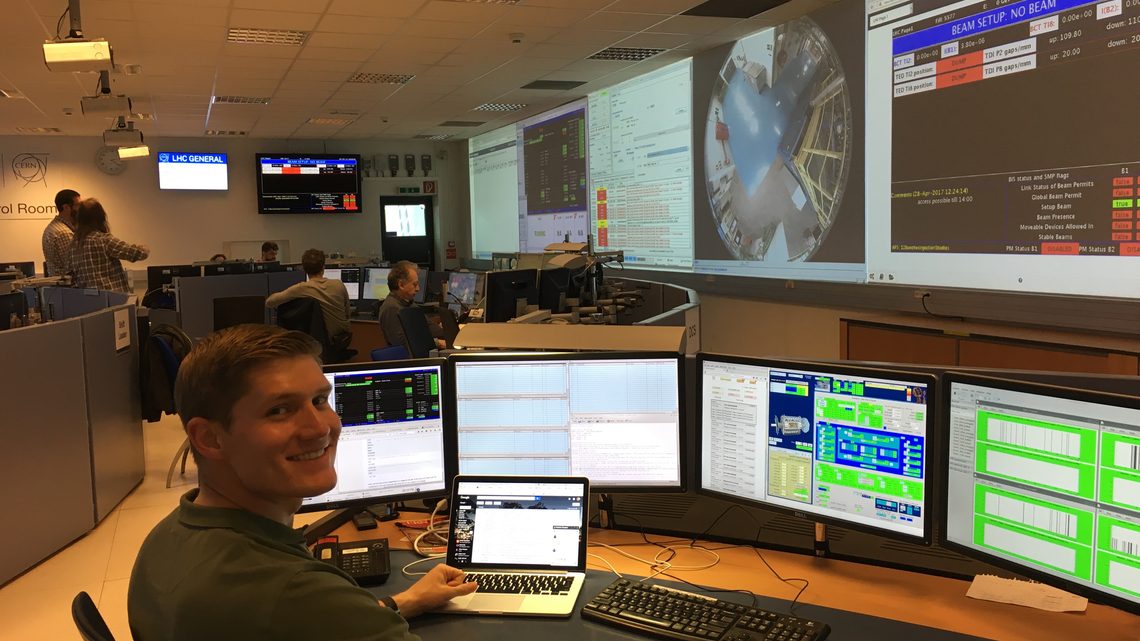 Pasner in the ATLAS experiment control room at CERN 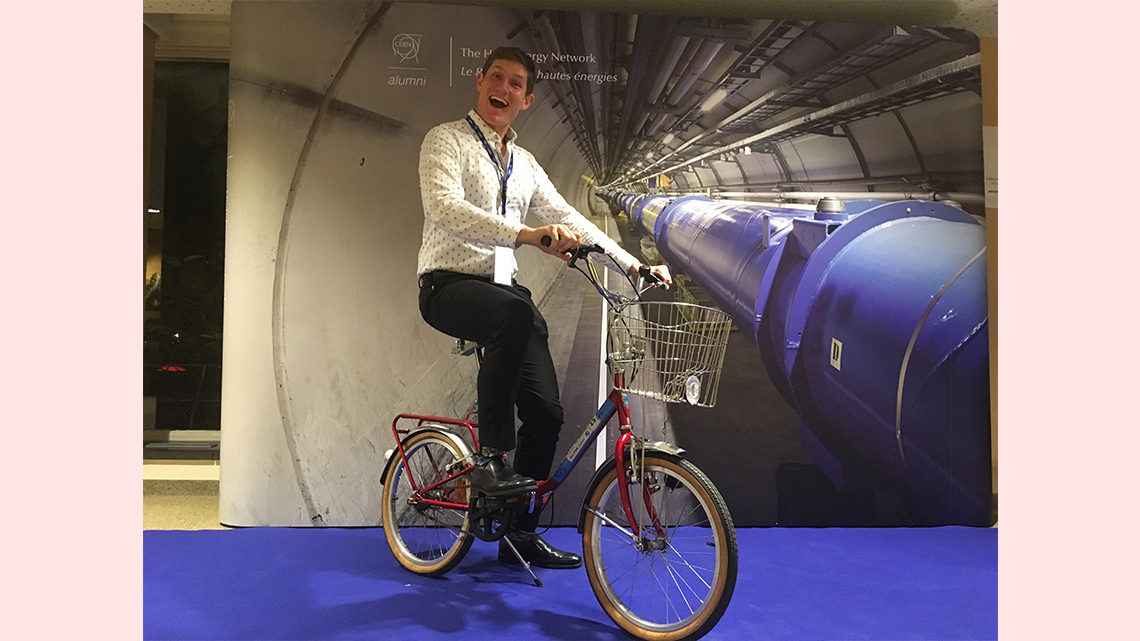 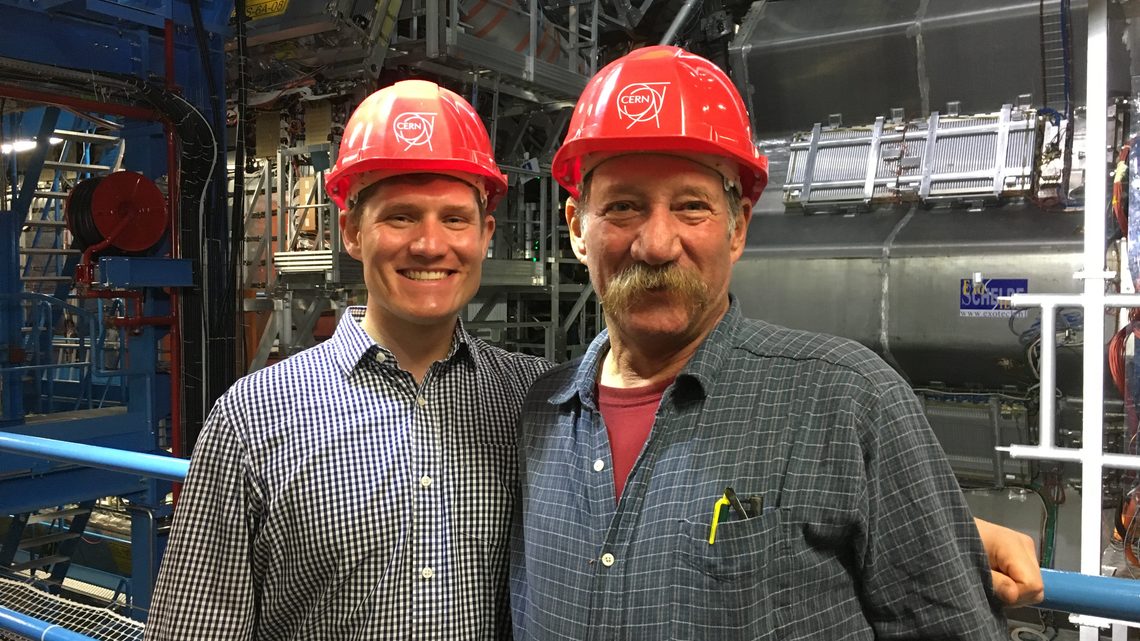 Pasner and his dad visit the ATLAS detector 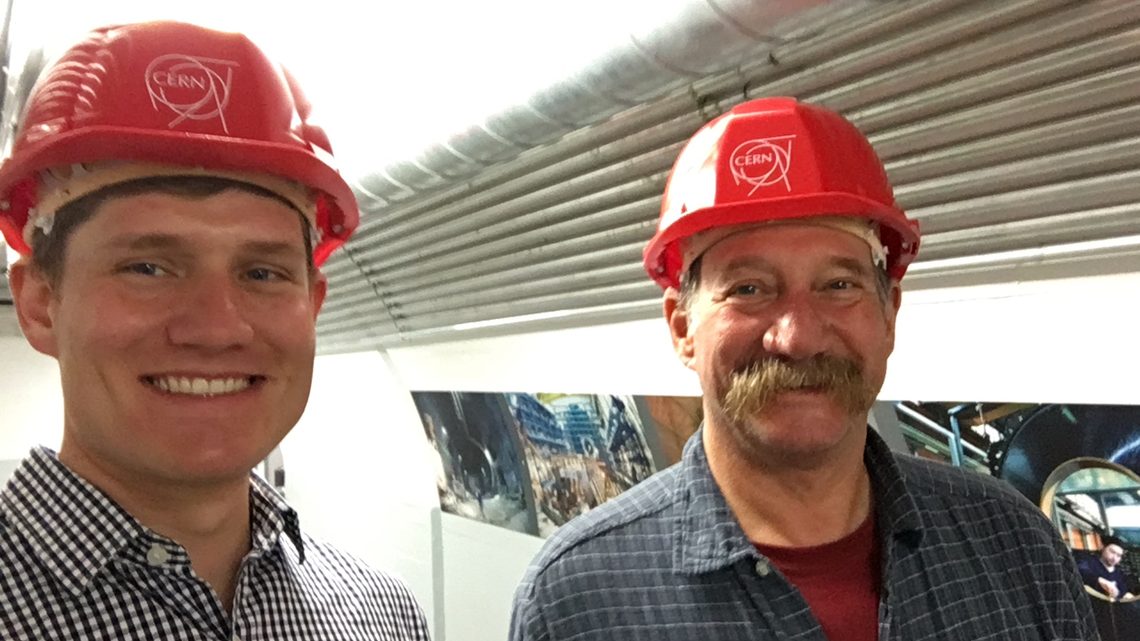 Pasner and his father at CERN 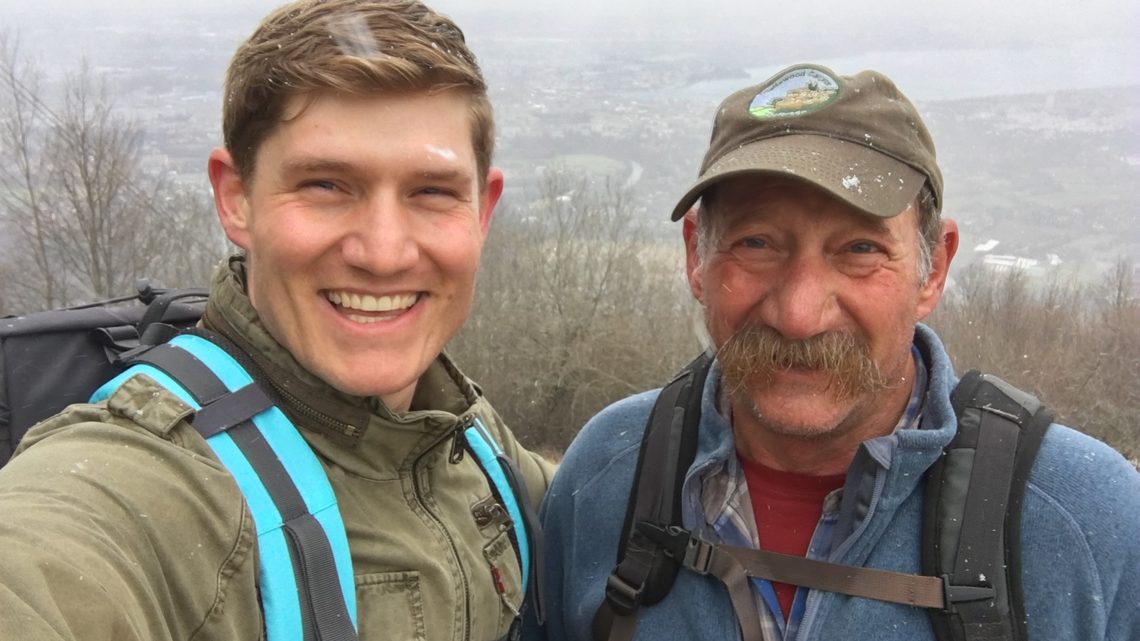 Pasner and his father on a hike near CERN 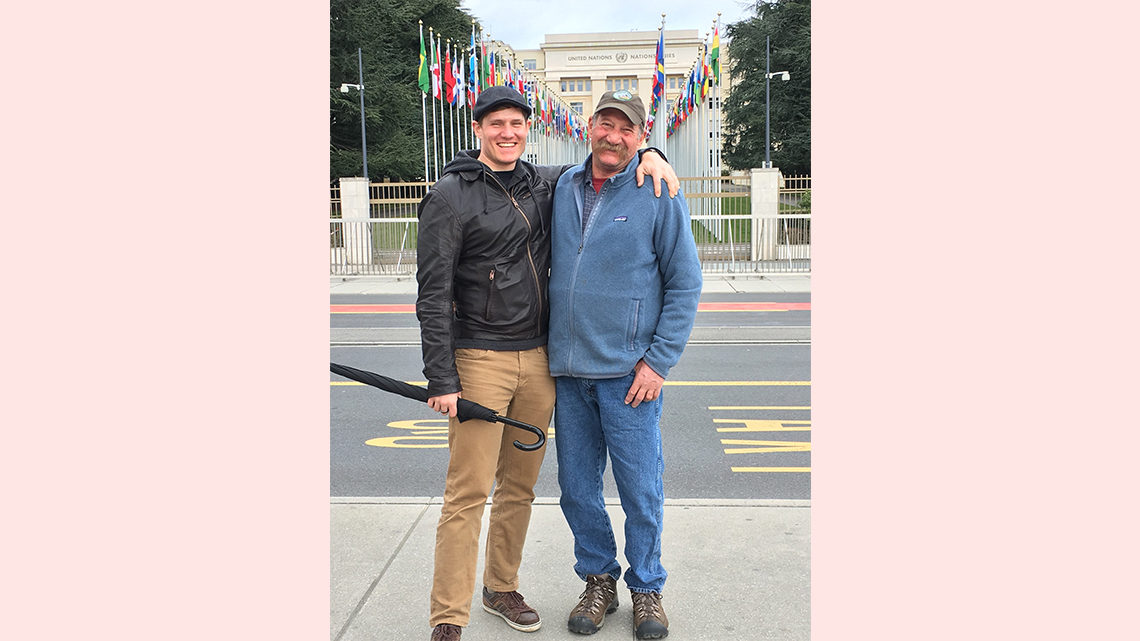 Pasner and his father outside the United Nations in Geneva 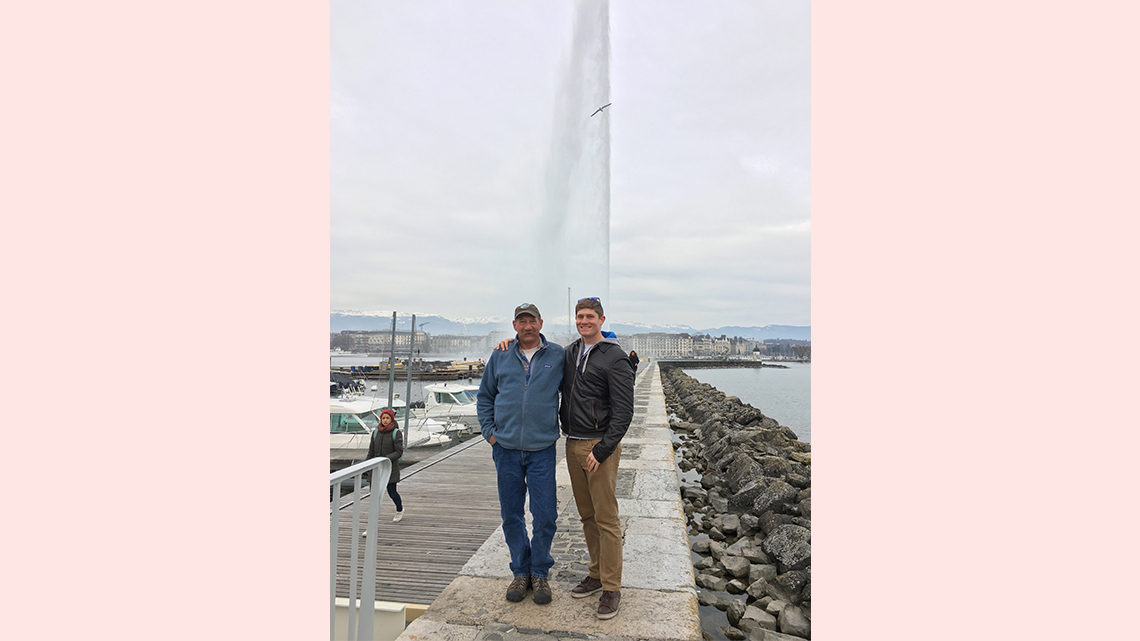 Pasner and his dad near the Jet d'Eau fountain in Geneva

Courtesy of Jake Pasner
Previous Next
Follow
Use your browser’s print dialog box to create a pdf.