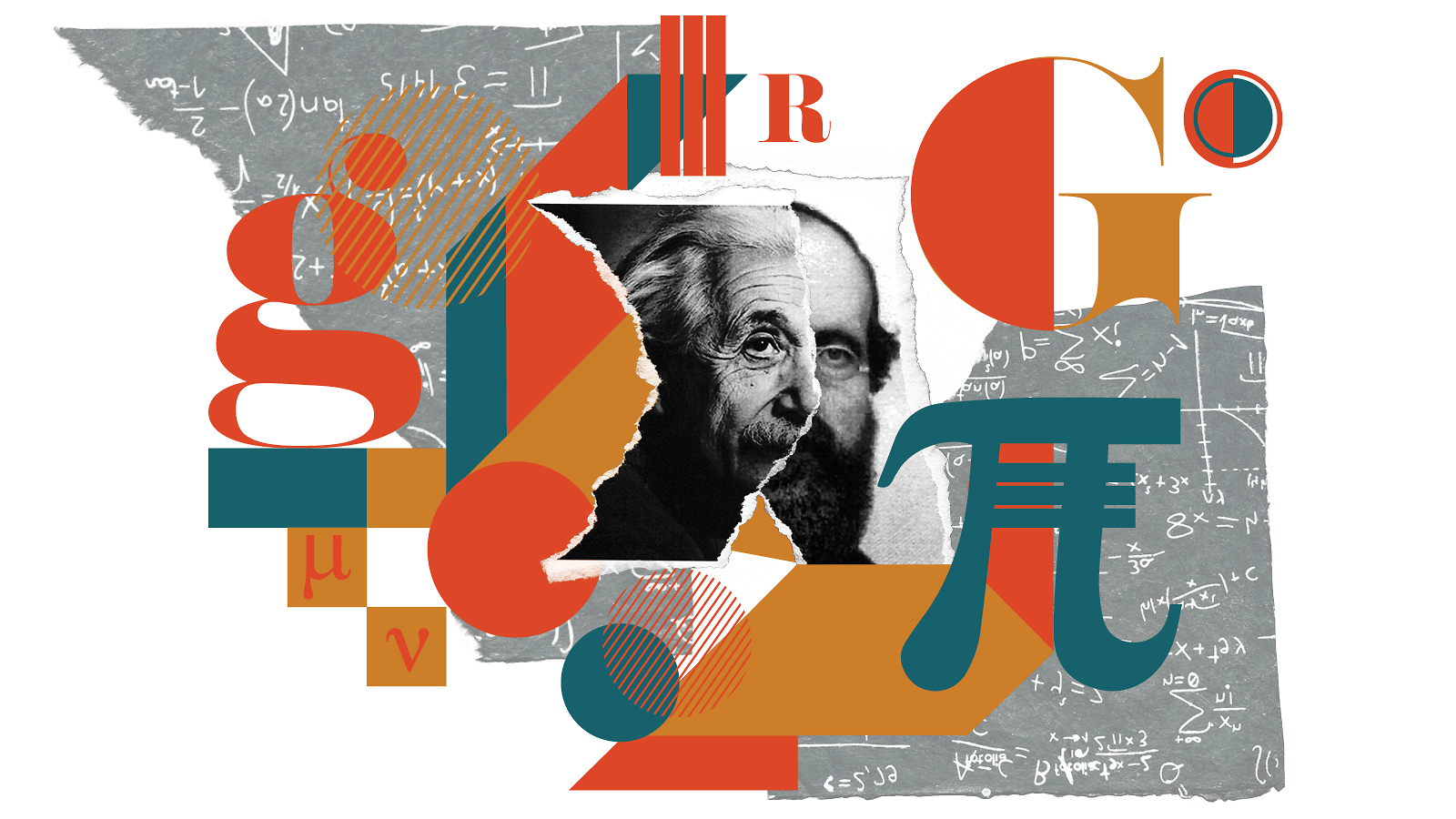 In 1912, Albert Einstein, then a 33-year-old theoretical physicist at the Eidgenössische Technische Hochschule in Zürich, was in the midst of developing an extension to his theory of special relativity.

With special relativity, he had codified the relationship between the dimensions of space and time. Now, seven years later, he was trying to incorporate into his theory the effects of gravity. This feat—a revolution in physics that would supplant Isaac Newton’s law of universal gravitation and result in Einstein’s theory of general relativity—would require some new ideas.

Fortunately, Einstein’s friend and collaborator Marcel Grossmann swooped in like a waiter bearing an exotic, appetizing delight (at least in a mathematician’s overactive imagination): Riemannian geometry.

This mathematical framework, developed in the mid-19th century by German mathematician Bernhard Riemann, was something of a revolution itself. It represented a shift in mathematical thinking from viewing mathematical shapes as subsets of the three-dimensional space they lived in to thinking about their properties intrinsically. For example, a sphere can be described as the set of points in 3-dimensional space that lie exactly 1 unit away from a central point. But it can also be described as a 2-dimensional object that has particular curvature properties at every single point. This alternative definition isn’t terribly important for understanding the sphere itself but ends up being very useful with more complicated manifolds or higher-dimensional spaces.

By Einstein’s time, the theory was still new enough that it hadn’t completely permeated through mathematics, but it happened to be exactly what Einstein needed. Riemannian geometry gave him the foundation he needed to formulate the precise equations of general relativity. Einstein and Grossmann were able to publish their work later that year.

“It’s hard to imagine how he would have come up with relativity without help from mathematicians,” says Peter Woit, a theoretical physicist in the Mathematics Department at Columbia University.

The story of general relativity could go to mathematicians’ heads. Here mathematics seems to be a benevolent patron, blessing the benighted world of physics with just the right equations at the right time.

“When you go far enough back, you really can’t tell who’s a physicist and who’s a mathematician.”

But of course the interplay between mathematics and physics is much more complicated than that. They weren’t even separate disciplines for most of recorded history. Ancient Greek, Egyptian and Babylonian mathematics took as an assumption the fact that we live in a world in which distance, time and gravity behave in a certain way.

“Newton was the first physicist,” says Sylvester James Gates, a physicist at Brown University. “In order to reach the pinnacle, he had to invent a new piece of mathematics; it’s called calculus.”

Calculus made some classical geometry problems easier to solve, but its foremost purpose to Newton was to give him a way to analyze the motion and change he observed in physics. In that story, mathematics is perhaps more of a butler, hired to help keep the affairs in order, than a savior.

Even after physics and mathematics began their separate evolutionary paths, the disciplines were closely linked. “When you go far enough back, you really can’t tell who’s a physicist and who’s a mathematician,” Woit says. (As a mathematician, I was a bit scandalized the first time I saw Emmy Noether’s name attached to physics! I knew her primarily through abstract algebra.)

Throughout the history of the two fields, mathematics and physics have each contributed important ideas to the other. Mathematician Hermann Weyl’s work on mathematical objects called Lie groups provided an important basis for understanding symmetry in quantum mechanics. In his 1930 book The Principles of Quantum Mechanics, theoretical physicist Paul Dirac introduced the Dirac delta function to help describe the concept in particle physics of a pointlike particle—anything so small that it would be modeled by a point in an idealized situation. A picture of the Dirac delta function looks like a horizontal line lying along the bottom of the x axis of a graph, at x=0, except at the place where it intersects with the y axis, where it explodes into a line pointing up to infinity. Dirac declared that the integral of this function, the measure of the area underneath it, was equal to 1. Strictly speaking, no such function exists, but Dirac’s use of the Dirac delta eventually spurred mathematician Laurent Schwartz to develop the theory of distributions in a mathematically rigorous way. Today distributions are extraordinarily useful in the mathematical fields of ordinary and partial differential equations.

Though modern researchers focus their work more and more tightly, the line between physics and mathematics is still a blurry one. A physicist has won the Fields Medal, one of the most prestigious accolades in mathematics. And a mathematician, Maxim Kontsevich, has won the new Breakthrough Prizes in both mathematics and physics. One can attend seminar talks about quantum field theory, black holes, and string theory in both math and physics departments. Since 2011, the annual String Math conference has brought mathematicians and physicists together to work on the intersection of their fields in string theory and quantum field theory.

String theory is perhaps the best recent example of the interplay between mathematics and physics, for reasons that eventually bring us back to Einstein and the question of gravity.

String theory is a theoretical framework in which those pointlike particles Dirac was describing become one-dimensional objects called strings. Part of the theoretical model for those strings  corresponds to gravitons, theoretical particles that carry the force of gravity.

Most humans will tell you that we perceive the universe as having three spatial dimensions and one dimension of time. But string theory naturally lives in 10 dimensions. In 1984, as the number of physicists working on string theory ballooned, a group of researchers including Edward Witten, the physicist who was later awarded a Fields Medal, discovered that the extra six dimensions of string theory needed to be part of a space known as a Calabi-Yau manifold.

When mathematicians joined the fray to try to figure out what structures these manifolds could have, physicists were hoping for just a few candidates. Instead, they found boatloads of Calabi-Yaus. Mathematicians still have not finished classifying them. They haven’t even determined whether their classification has a finite number of pieces.

As mathematicians and physicists studied these spaces, they discovered an interesting duality between Calabi-Yau manifolds. Two manifolds that seem completely different can end up describing the same physics. This idea, called mirror symmetry, has blossomed in mathematics, leading to entire new research avenues. The framework of string theory has almost become a playground for mathematicians, yielding countless new avenues of exploration.

Mina Aganagic, a theoretical physicist at the University of California, Berkeley, believes string theory and related topics will continue to provide these connections between physics and math.

“In some sense, we’ve explored a very small part of string theory and a very small number of its predictions,” she says. Mathematicians and their focus on detailed rigorous proofs bring one point of view to the field, and physicists, with their tendency to prioritize intuitive understanding, bring another. “That’s what makes the relationship so satisfying.”

The relationship between physics and mathematics goes back to the beginning of both subjects; as the fields have advanced, this relationship has gotten more and more tangled, a complicated tapestry. There is seemingly no end to the places where a well-placed set of tools for making calculations could help physicists, or where a probing question from physics could inspire mathematicians to create entirely new mathematical objects or theories.