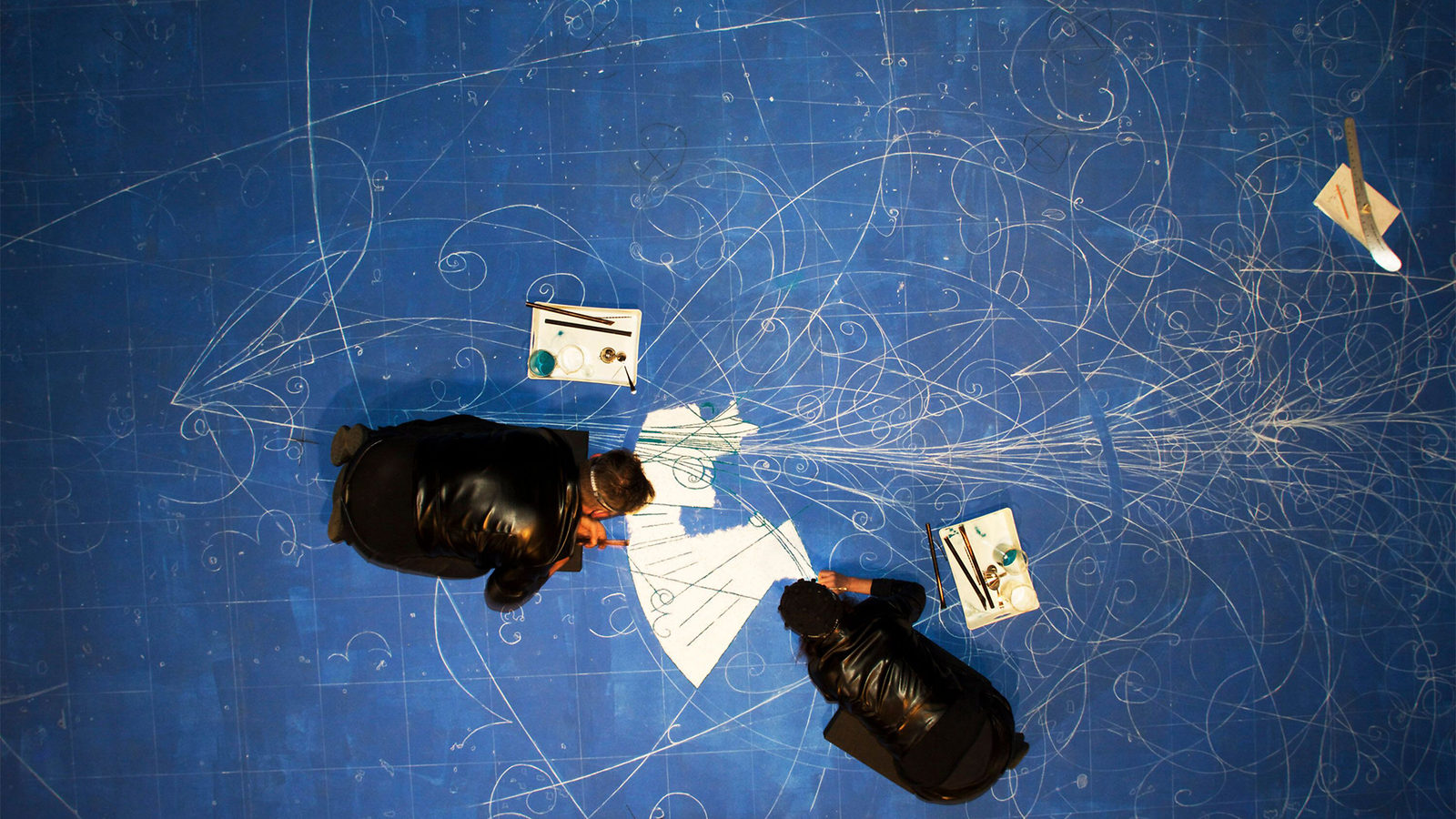 For 30 days, Chris Klapper and Patrick Gallagher spent about 12 hours per day sitting or kneeling atop a 20-by-14-foot platform at The Invisible Dog Art Center in Brooklyn. All day they gently scratched the sides of foot-long copper tubes, using the vibrations to coax grains of crushed, dyed marble onto a large blueprint.

Slowly, they sculpted out a replica of a decades-old photograph—an image of tracks of microscopic bubbles left behind by charged particles curving through a magnetic field in a scientific instrument called a bubble chamber.

Titled “Everything and Nothing,” the bright blue and white sculpture was part of Klapper and Gallagher’s ongoing series, “Dataatadata.” The piece was inspired by the Tibetan Buddhist tradition of the sand mandala.

Mandalas, figures that often feature concentrically arranged, repeating shapes, originated in both Hinduism and Buddhism as ritual symbols for the universe. Buddhist monks painstakingly create and then dismantle intricate mandalas made of sand as a meditation on the impermanence of life.

Mandalas can be found as far back as 14th century art. Bubble chambers, on the other hand, are not so old. Just a few decades ago they were considered cutting-edge technology in particle physics.

Bubble chambers were large vessels filled with transparent liquid, heated just below boiling point. A piston would rapidly decrease the pressure inside the chamber, which caused the charged particles that passed through the superheated liquid to produce microscopic bubbles as they traveled. Scientists photographed those bubbles to study the paths the particles took and the energy they left behind.

To find the perfect bubble chamber image to recreate, Klapper and Gallagher scrolled through hundreds of these photographs in the archive at the US Department of Energy’s Fermi National Accelerator Laboratory.

One had a large circle, a remnant of the bubble chamber piston, directly in the middle of all the particle tracks.

As it happens, mandala means “circle” in Sanskrit. “That image really stood out to us,” Gallagher says: It was the perfect marriage of mandala and particles.

Using a grid system, the artists sketched each square of the photograph onto their platform, mapping more and more particle tracks as they went. Once their blueprint was ready, they began the task of putting millions of tiny grains in place.

When guests entered the gallery during their work, either Klapper or Gallagher would pause and explain what they were doing.

“Normally people don’t get to see artists in the process of creating,” Klapper says. “We got to create these incredible connections with people and see the moment their eyes lit up with interest and understanding.”

With their bubble chamber, Fermilab physicists had created a permanent record of a fleeting particle interaction, by photographing it. The sand mandala was a different kind of record.

On the final day of the sand mandala exhibit in New York, an audience gathered to witness the performance one last time. At 7:30 p.m., the two creators stood across from each other on the platform and finished their piece—by dismantling it. They used thick brushes to sweep their carefully placed sand into a single pile, honoring the impermanence of the particles they depicted.

In a process they say was more about transformation than destruction—and perhaps a nod to the conservation of the energy—the final collection of sand was placed into a large glass beaker to one day be displayed again. 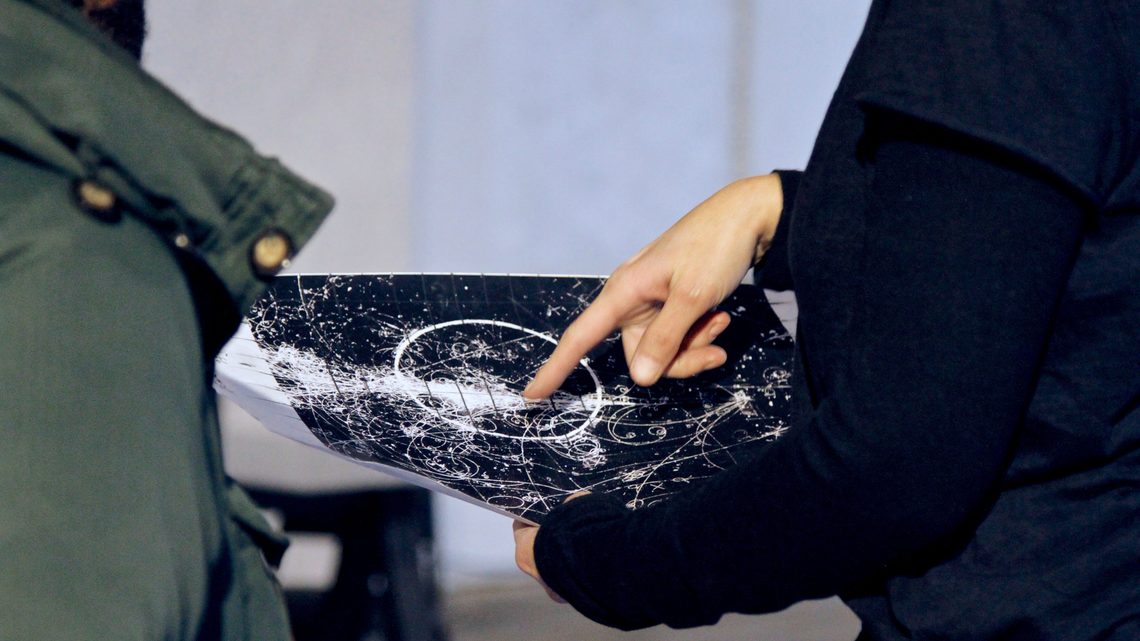 One of the artists explains the contents of the original bubble chamber image. 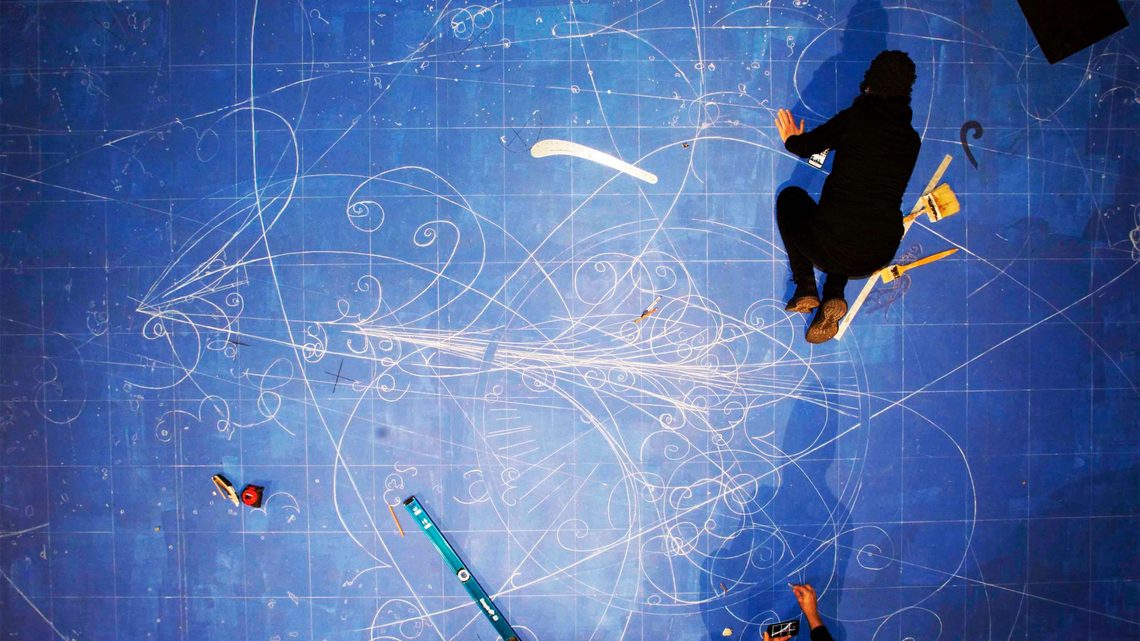 The artists complete the blueprint. 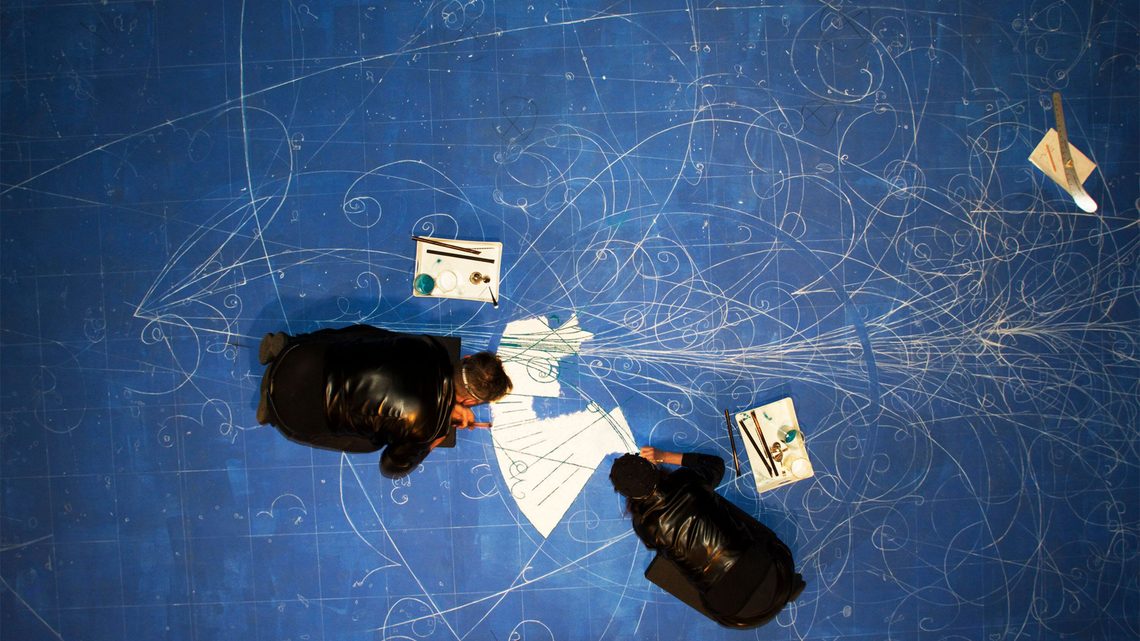 The artists begin to fill in the blueprint with sand. 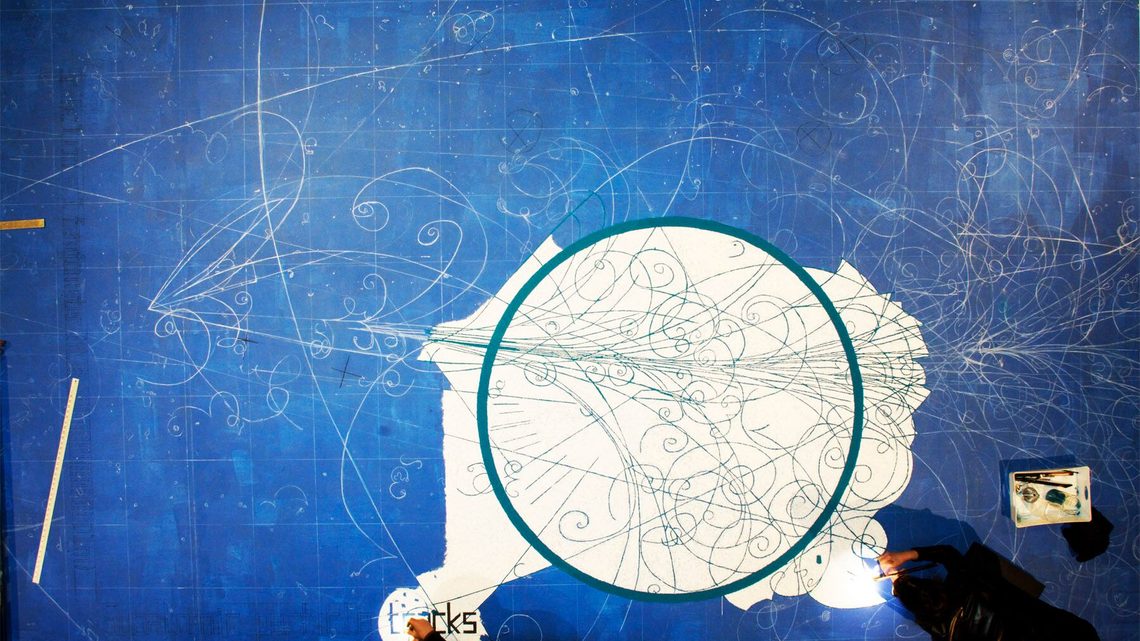 The artists complete the center of the mandala. 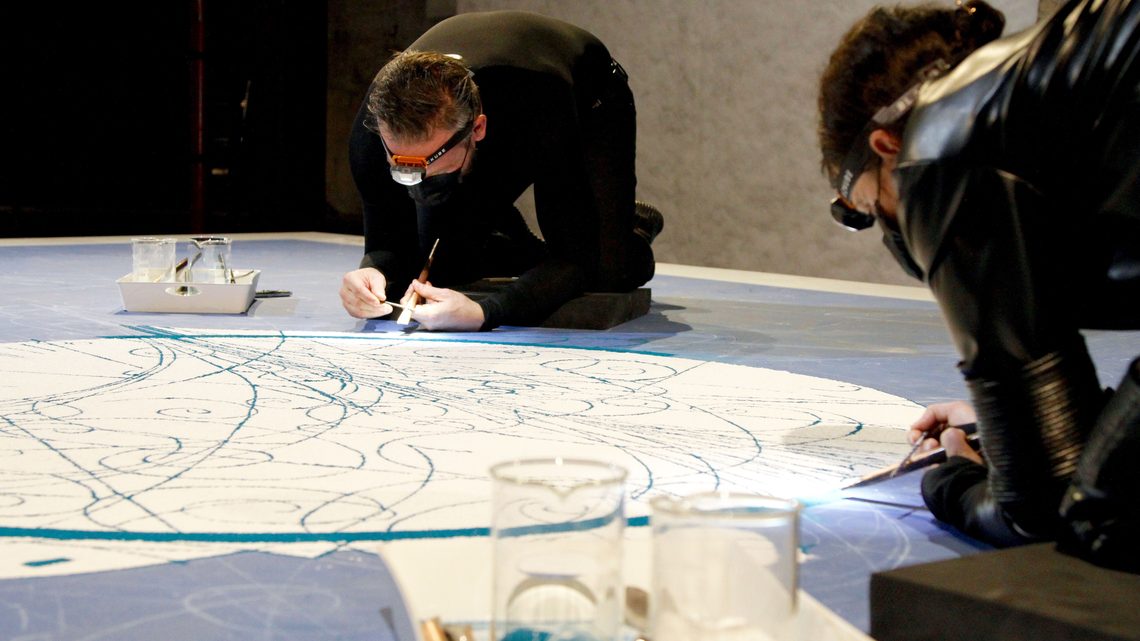 The artists add sand one sprinkle at a time. 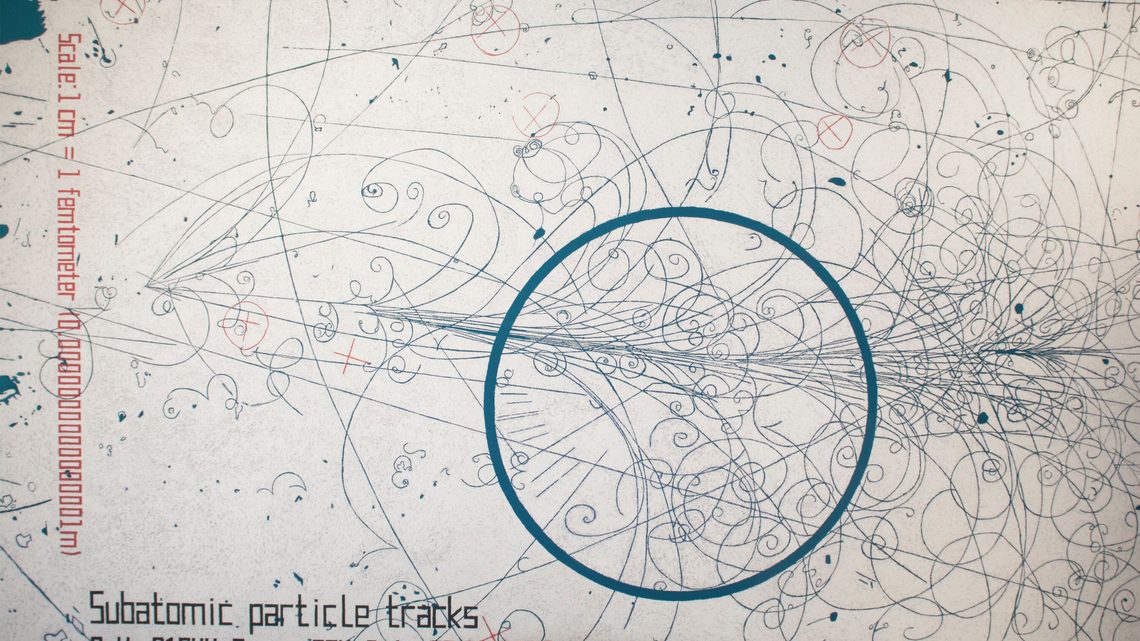 The artists complete the image. 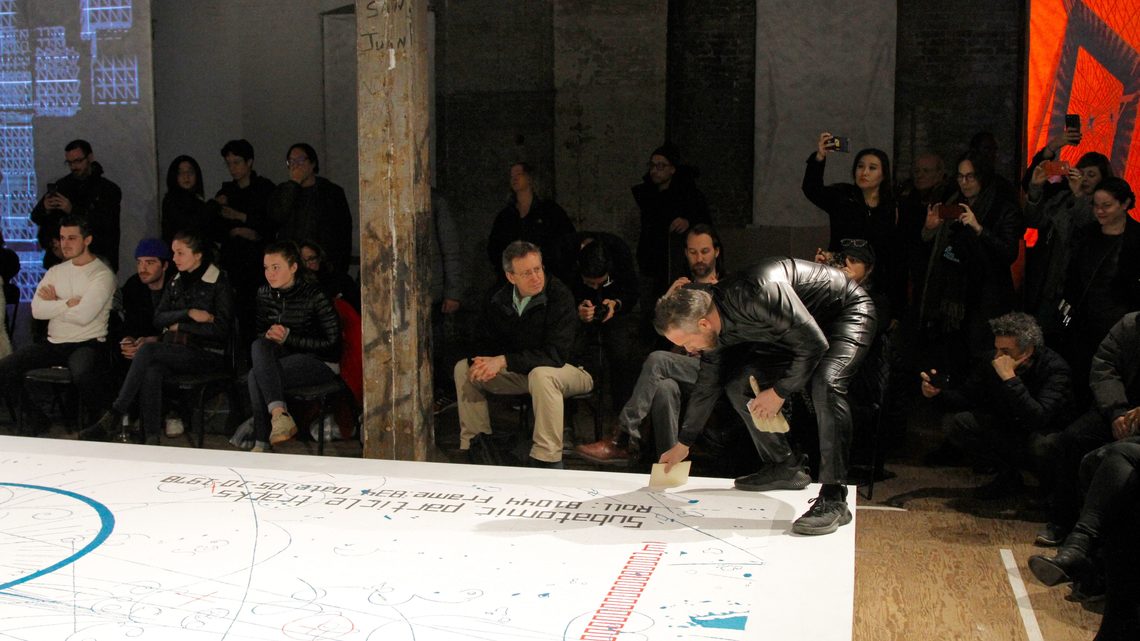 The artists begin to sweep up the mandala. 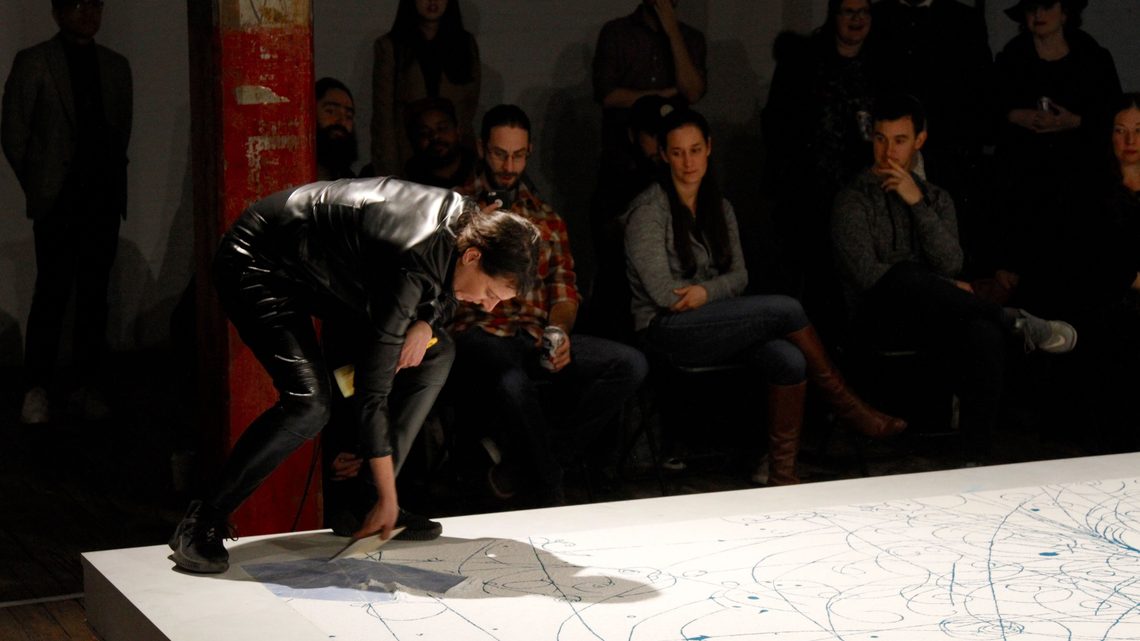 The artists start at the sides and work toward the middle. 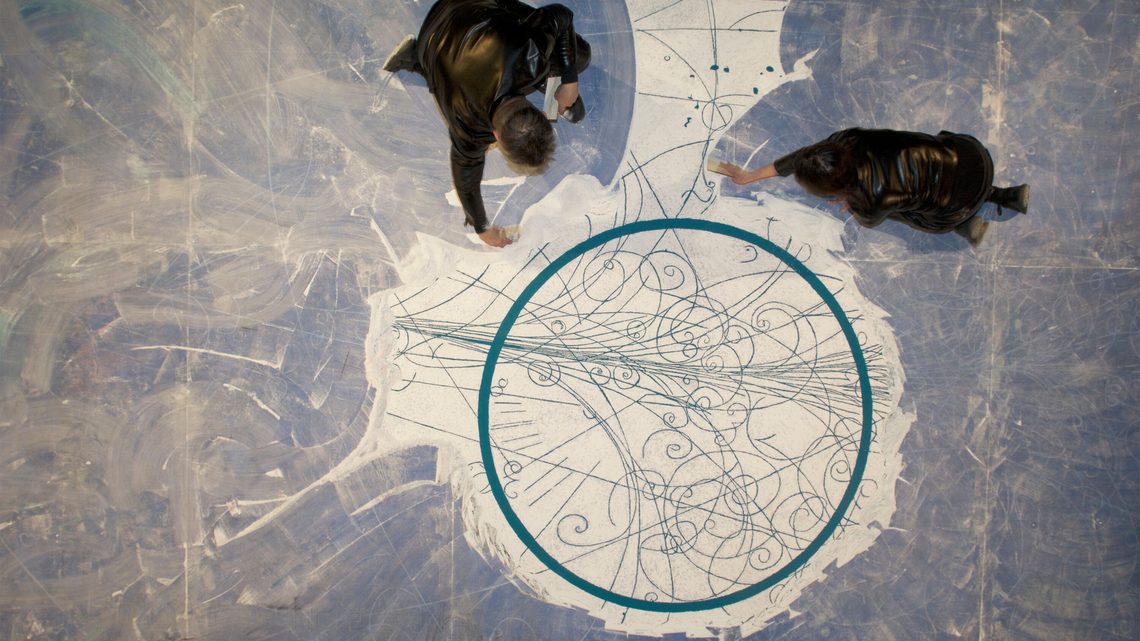 The artists sweep the sand toward the center. 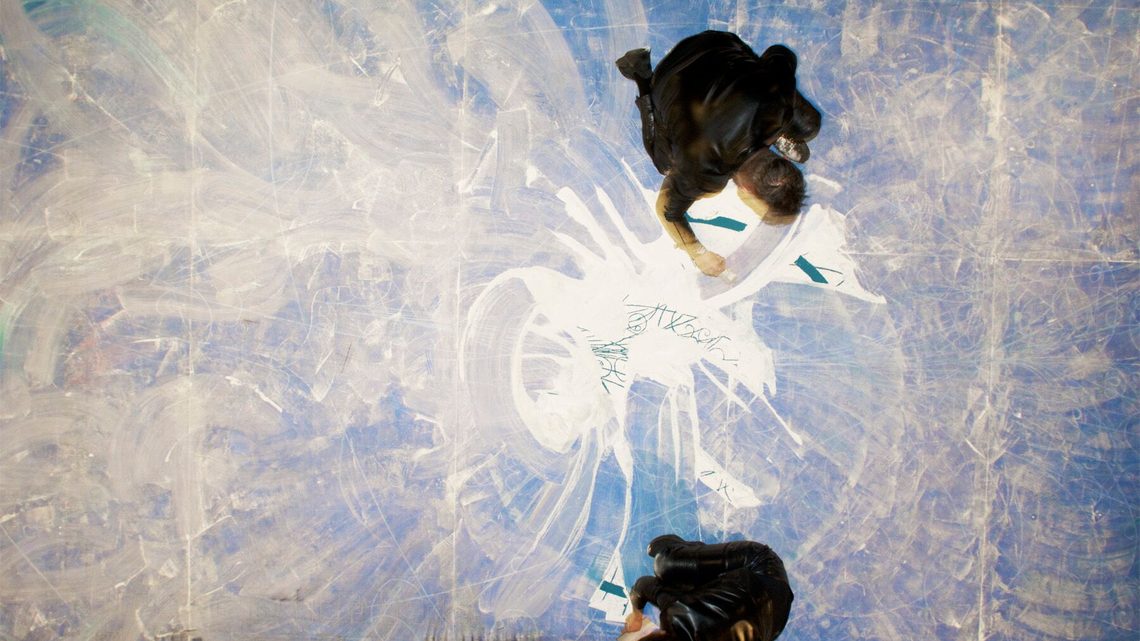 The artists erase the central circle of the image with their brushes. 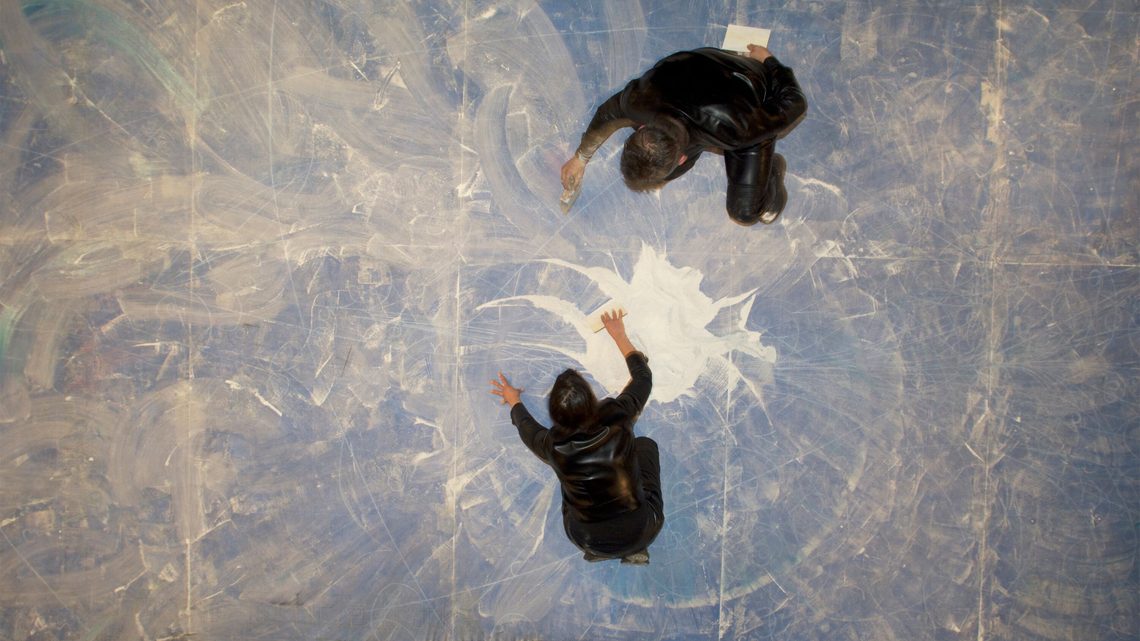 The sand mandala is not complete until it is dismantled. 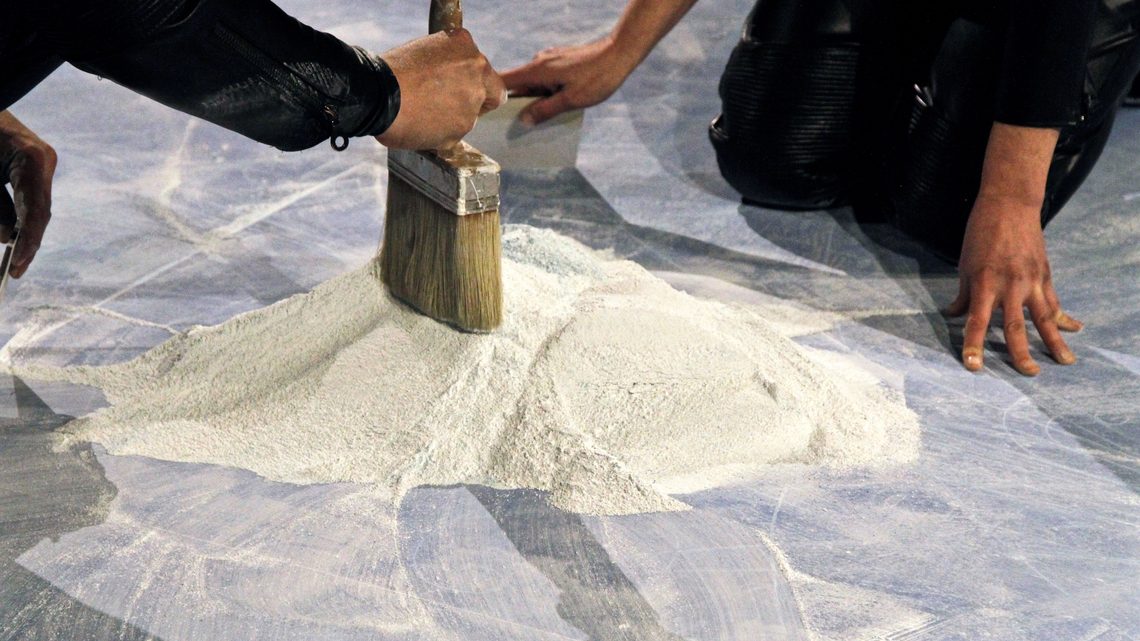 The artists sweep the sand into a pile in the center. 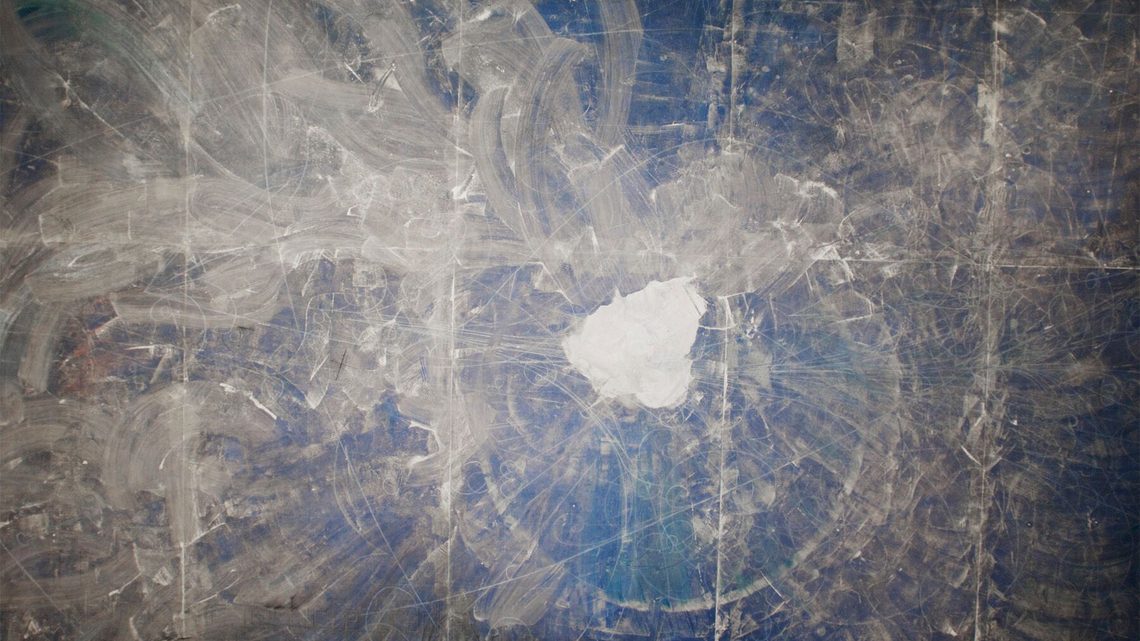 The image they create is fleeting, but the artists preserve the sand to display again.

Chris Klapper and Patrick Gallagher
Previous Next
Follow
Use your browser’s print dialog box to create a pdf.