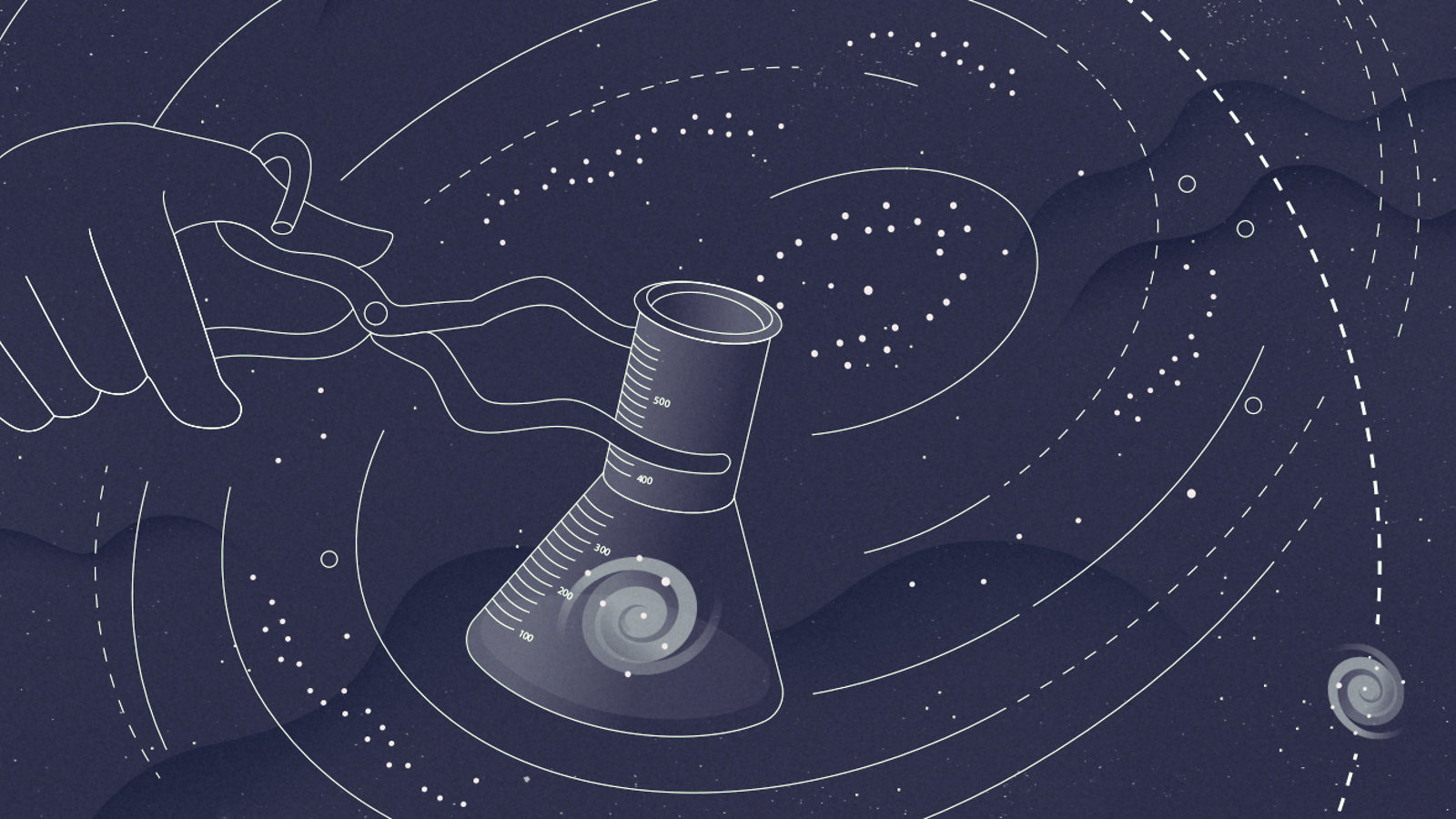 The booming science of dwarf galaxies

A recent uptick in the discovery of the smallest, oldest galaxies benefits studies of dark matter, galaxy formation and the evolution of the universe.

Galaxies are commonly perceived as gigantic spirals full of billions to trillions of stars. Yet some galaxies, called dwarf galaxies, can harbor just a few hundred suns.

The recent discovery of 20 new potential dwarf galaxies fueled a boom in the science of these faint objects, which are valuable tools to study dark matter, galaxy formation and cosmic history.

Ten years ago, only about a dozen dwarf galaxies were known. This number quickly doubled after the Sloan Digital Sky Survey began its second phase of operation in 2005. SDSS-II took better than ever images of the sky, and researchers started using computer programs to identify dwarf galaxies in them.

The number of potential dwarf galaxies has spiked of late, largely due to results from the first two years of the new Dark Energy Survey, which can see objects 10 times as faint. The total number of known dwarf galaxy candidates orbiting our Milky Way—not all of them have been confirmed as galaxies yet—has now reached about 50.

“The precise number is being updated on almost a weekly basis during recent months,” says Keith Bechtol of the University of Wisconsin, Madison, one of the lead authors of two DES papers, published in March and August, announcing the discoveries of potential satellite galaxies.  “These are truly exciting times for this type of research.”

In general, the term “dwarf galaxy” refers to a galaxy that is smaller than a tenth of the size of our Milky Way, which is made of 100 billion stars. So not all dwarf galaxies are truly dwarfish. In fact, two of these objects in the southern night sky, called the Magellanic Clouds, are so large that they are visible to the naked eye.

However, researchers are particularly interested in the faintest dwarf galaxies. They make excellent laboratories in which to study dark matter—the invisible form of matter that is five times more prevalent than its visible counterpart but whose nature remains a mystery.

Scientists’ best guess is that it’s made of fundamental particles, with hypothetical weakly interacting massive particles, or WIMPs, as the top contenders. Researchers think WIMPs could produce gamma rays as they decay or annihilate each other in space. They’re searching for this radiation with sensitive gamma-ray telescopes.

Ultra-faint dwarf galaxies orbiting the Milky Way are ideal targets for this search for two reasons. First, because they have high ratios of dark matter to regular matter and are relatively close to us, they could produce detectable dark matter signals.

“The motions of stars in ultra-faint galaxies are so fast that they are best explained if there is 100 to 1000 times more dark matter than the masses of all the stars taken together,” Bechtol says.

Second, these galaxies are the oldest known galaxies. Their busiest days are in the past; most formed their stars more than 10 billion years ago. This, together with the fact that they have few stars and little gas, makes them very “clean” objects for the dark matter search.

By contrast, in the also dark-matter-rich center of the much younger Milky Way, stars are still forming and many other astrophysical processes are producing gamma-ray signals that could obscure signs of dark matter.

“If we ever saw gamma rays coming from these ultra-faint galaxies, it would be a smoking gun for dark matter,” says researcher Andrea Albert of the Kavli Institute for Particle Astrophysics and Cosmology, a joint institute of Stanford University and the SLAC National Accelerator Laboratory. She is involved in the dark matter analysis of the recently discovered DES dwarf galaxy candidates with the Fermi Gamma-ray Space Telescope.

No convincing sign of WIMPs has yet been found coming from dwarf galaxies, including the most recent DES candidate dwarf galaxies, as preliminary results presented at the 2015 Topics in Astroparticle and Underground Physics conference in Torino, Italy, suggest.

But even the absence of a signal is progress because it sets limits on what dark matter can and cannot be.

Researchers also study dwarf galaxies because they hope to learn about the history of our cosmic neighborhood and the formation of galaxies like our own.

Current models suggest that galaxies don’t start out as enormous objects with a gazillion of stars, but rather as small structures that merge with others into larger ones. Dwarf galaxies are at the bottom of this hierarchy and are believed to be the building blocks of larger galaxies.

“The way we see the Milky Way and its satellites today is only a snapshot in time,” says astronomer Marla Geha of Yale University. “Our own galaxy is a merger of smaller galaxies, and it’s still merging.”

In other words, the Milky Way itself may have started out as a dwarf galaxy with only a few hundred to thousand stars. Today, it is a large galaxy, and simulations suggest that in 4 to 5 billion years the Milky Way will merge with the Andromeda Galaxy, the nearest major galaxy in our cosmic neighborhood.

But dwarf galaxies can give us insight into more than just our local neighborhood. By better understanding dwarf galaxies, researchers can also study the evolution of the whole universe.

Since dark matter is abundant and interacts gravitationally with itself and regular matter, it has influenced the cosmos and its structures ever since the big bang. In fact, we know today that galaxies are embedded in clumps, or halos, of dark matter that have formed in the expanding universe. These halos, in turn, are surrounded by smaller halos that harbor dwarf satellite galaxies.

“The discovery of an increasing number of dwarf galaxies is exciting because our cosmological theories predict that the Milky Way has a few hundred of them,” Geha says. “If we don’t find enough satellites, we will need to adjust our models. However, considering that we haven’t surveyed the entire sky yet and haven’t been looking deeply enough, we’re mostly on track for our predictions.”

Some of the dwarf galaxy candidates discovered by DES earlier this year could potentially orbit the Magellanic Clouds, the largest satellites of the Milky Way. If confirmed, the result would be quite fascinating, says KIPAC researcher Risa Wechsler.

“Satellites of satellites are predicted by our models of dark matter,” she says. “Either we’re seeing these types of systems for the first time, or there is something we don’t understand about how these satellite galaxies are distributed in the sky.”

A better and better view

So far, studies of dwarf galaxies have largely been restricted to satellites of our Milky Way, and researchers believe that much could be learned from studying more distant ones.

“One question we would like to answer is why the faintest dwarf galaxies are so extreme in size, age and dark matter content,” Geha says. “Is this because the ones we can observe are affected by their proximity to the Milky Way, or are these properties common to all dwarf galaxies in the universe?”

For the ultimate test, researchers want to be able to detect even fainter objects and look farther into space than they can with DES. They’ll be able to do so once the Large Synoptic Survey Telescope will come online in 2022. The telescope’s 3.2-gigapixel camera will produce the deepest views of the night sky ever observed.

And if that’s not enough, NASA is planning a space mission called the Wide-Field Infrared Survey Telescope, which could spot ultra-faint dwarf galaxies that evade even LSST’s watchful eye.