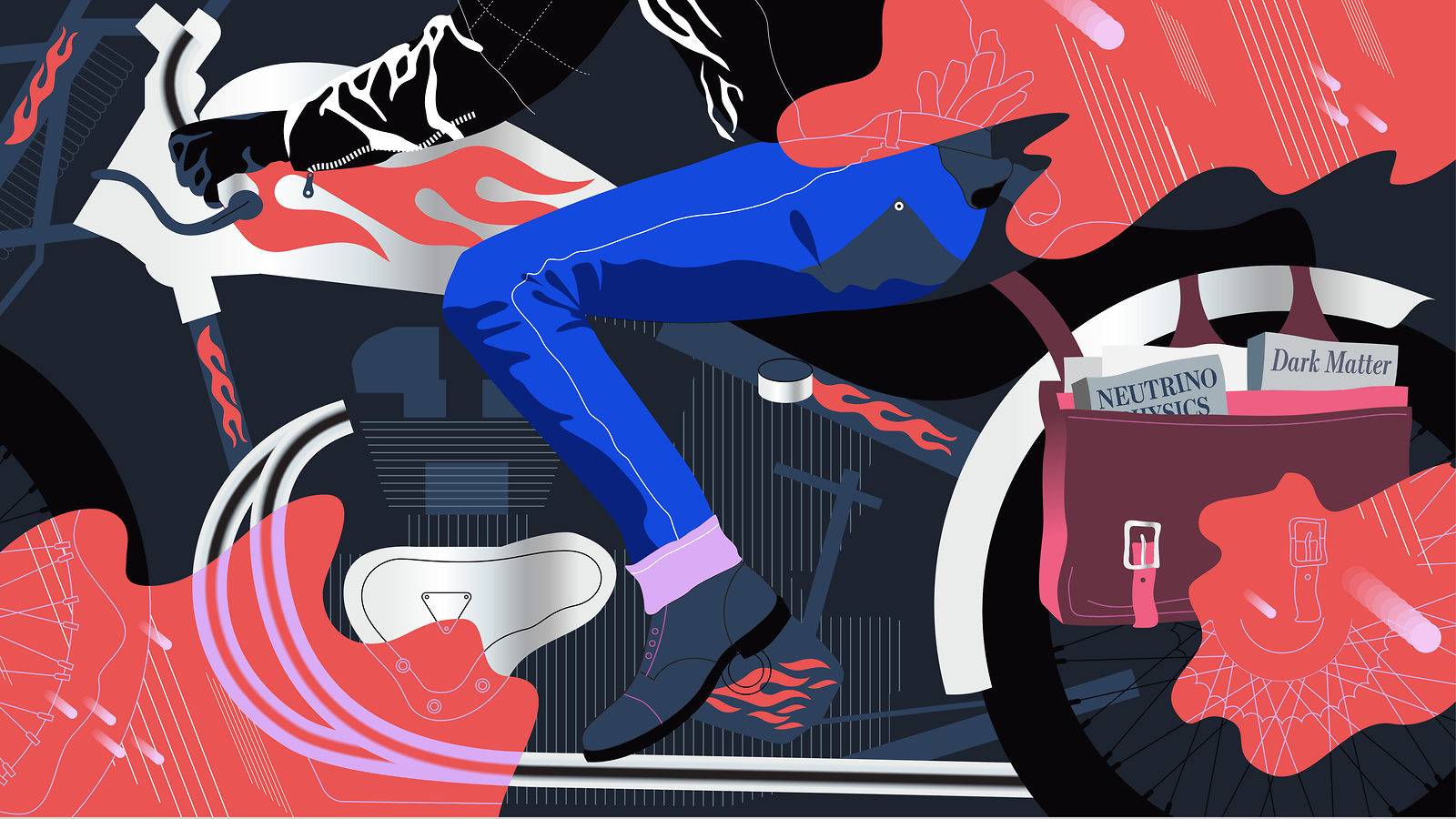 The bike or the ride

Sometimes teenage rebellion means going for a degree in physics.

Although Jim Hanhardt originally planned to become a theoretical chemist, his life took a turn when he developed a love for motorcycles. Shortly after, he traded in his blackboard for a hardhat, working as a miner to support his dream of building a V8 bike.

For his son, Mark, now an experiment support scientist at Sanford Underground Research Facility, teenage rebellion meant steering clear of motorcycles and mines and pursuing a career in astrophysics.

“Growing up in my family, being a rebel meant not joining a biker gang and instead going for a physics degree,” he says. “Astronomy seemed like the exact opposite of mining: Instead of looking at the ground I was looking at the stars.”

In 1988, when Mark was 7, his father took a job at Homestake Mine in South Dakota, the largest gold mine in North America.

“At first I had the impression of Homestake that every 7-year-old probably has of their parent’s workplace,” he says, “which is that I didn’t really understand it. As I grew up, I came to know Homestake as really just the core of the region. Everybody had a tie to Homestake and just about everybody had a family member who worked there. It’s really what drove this area.” 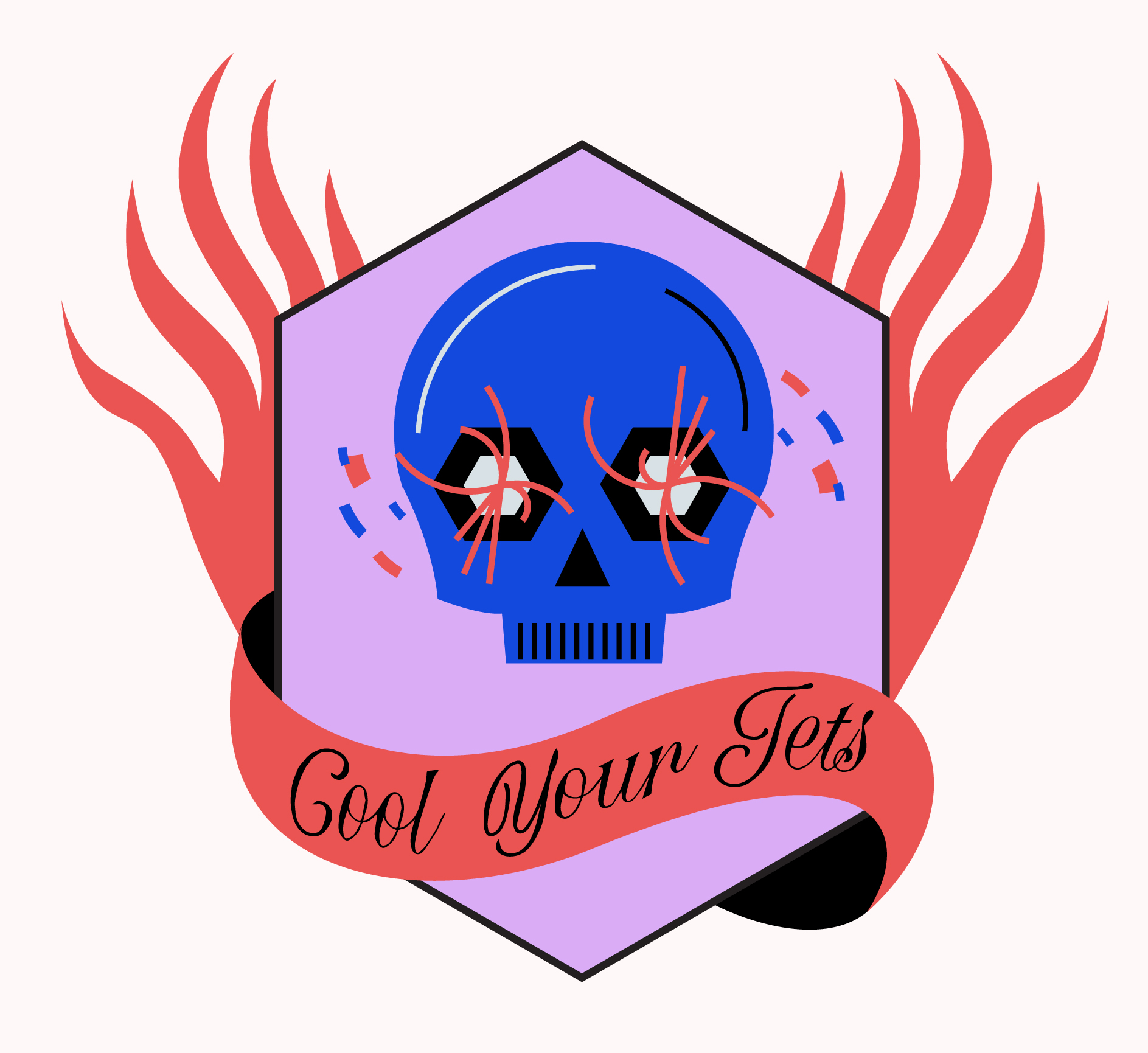 Mark’s family lived in Sturgis, which has hosted the Sturgis Motorcycle Rally almost every August since 1938. In 2015, a record more than 700,000 people attended.

Mark says the rally is something that the entire town would get ready for. He remembers going on rides on the back of his dad’s bike and then walking downtown to check out all the vendors and bikes and people from all around the world.

Despite growing up in this motorcycle mecca, it wasn’t until after he earned a bachelor’s in physics that Mark bought his first motorcycle.

“I decided that I had rebelled enough and it was time to give in and get a motorcycle,” he says. “In that first ride I immediately realized, ‘Oh yeah, this is what I've been missing all along. This is why my dad’s so into it. This is my lifestyle now.’”

Mark says his father was over the moon. “I think my dad shook my hand when I got my bachelor’s degree, and he hugged me when I got my master’s, but he probably cried when I bought that first bike.” 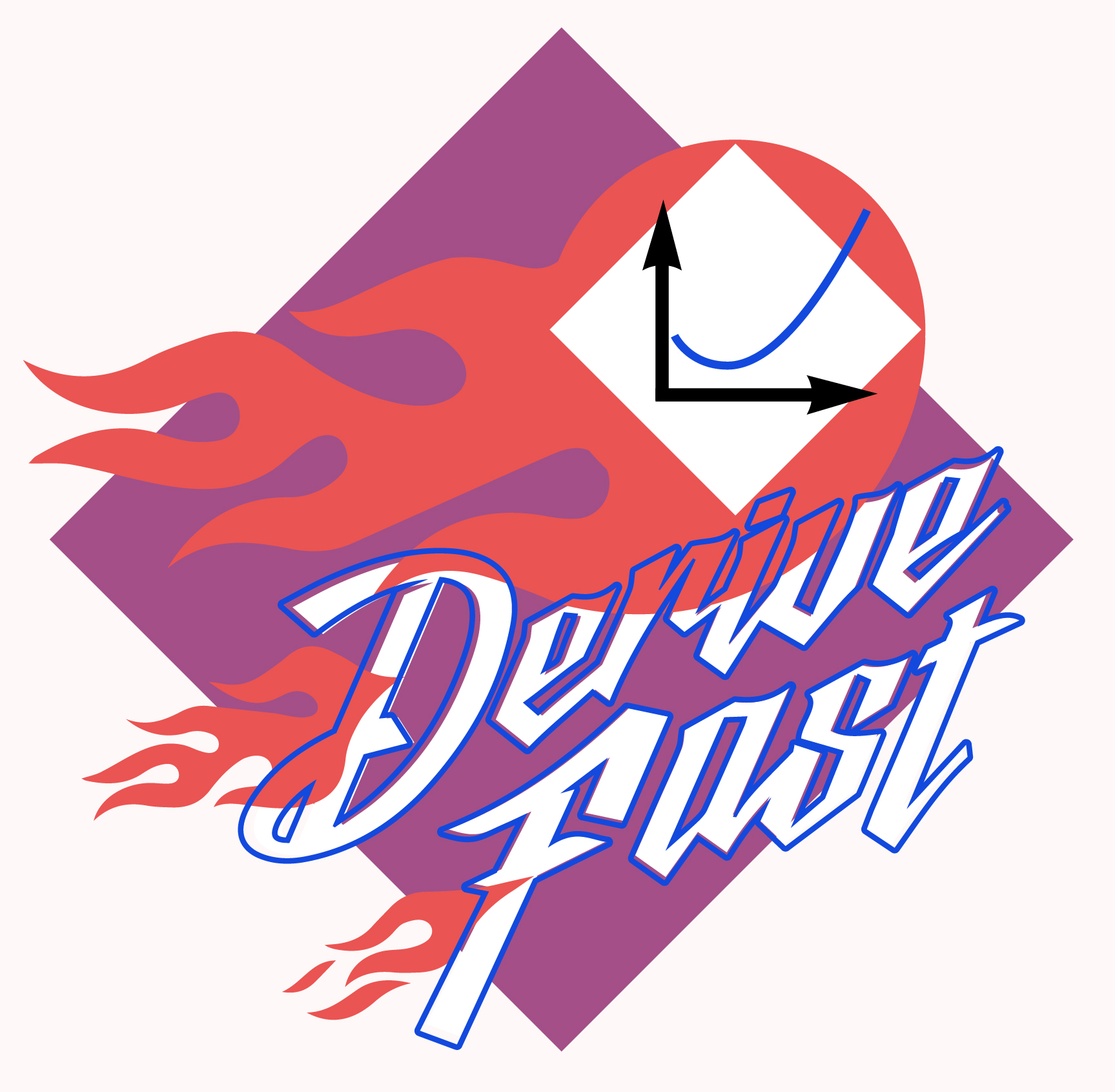 He remembers one time in particular when he was working on a bike trying to get something just perfect, and his dad told him that he had to decide: Is he about the bike, or the ride?

“I’ve found that I think back on that and apply it to my life a lot,” he says. “My dad wasn’t materialistic. He made me realize you have to think more about the experience than about the accoutrements. It was one of those moments that, if we weren’t bonding over motorcycles, I would have missed out on.”

Mark says that after purchasing that first bike, coming back to the Sturgis rally was like entering a different world.

“When I was a kid participating, it was just a really long carnival,” he says. “Coming back to it as an adult who actually has an interest in riding motorcycles is really amazing because you get to talk to and ride with people from all around the world who have that same passion. The events are amazing, the food is amazing, and just the general energy, the air of excitement, is amazing. But what I look forward to the most is the people.” 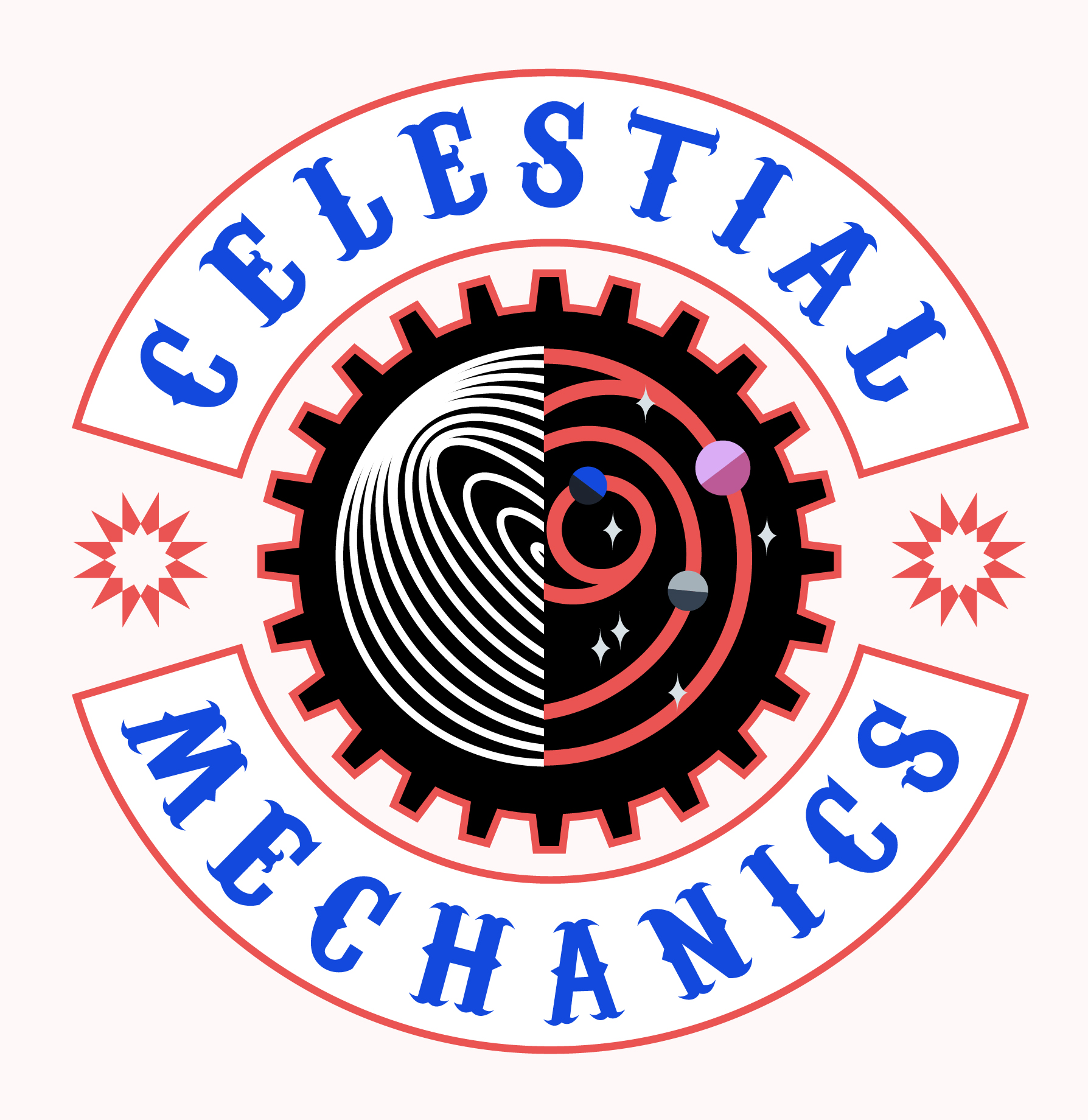 In 2002, Jim lost his job at Homestake when the mine permanently closed after operating for nearly 125 years. But in 2006, when Sanford Lab set up camp in Homestake to host physics experiments investigating things like dark matter and neutrinos, he was brought back on to assist with maintenance at the mile-deep campus.

Even though Mark went into physics as a way to “escape the mines and look at the stars,” he quickly discovered that the best place to study the topics he was interested in was in an underground lab. While a master’s student, Mark became involved with the Large Underground Xenon experiment, at the time the world’s most sensitive dark matter detector.

Although he and his father didn’t get a chance to work together often, Mark describes the rare occasions they did as “magical.”

“One of the things that really inspired me about my dad was that he enjoyed mining because he felt like it was an honest way to make a living,” he says. “He felt like after he put in a full day he earned what he made.

“I suppose I feel kind of the same way. My job may not be as physically demanding, but I feel like the stuff I’m doing is difficult. It’s something that not everyone can do, and it’s something that I really get fulfillment out of doing. The fact that I get to make a paycheck out of something that makes me feel good already, I think that’s something we had in common.” 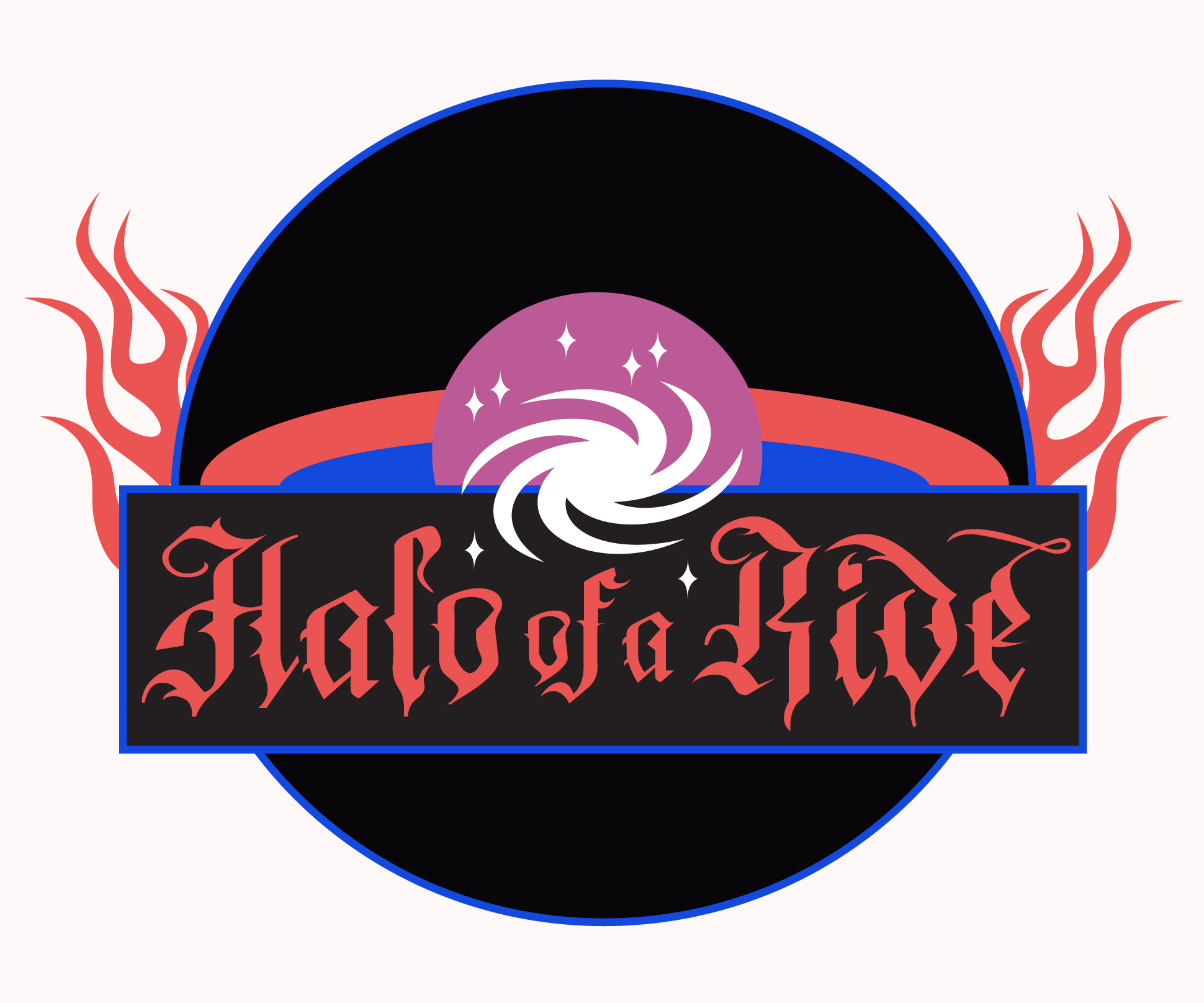 Mark says that he often finds connections between his passion for physics and his passion for riding motorcycles, something he expresses through his license plate, which reads “DRKMTR.”

“I spent a good portion of my life studying dark matter,” he says. “It really is this deep dark mystery that we’re still trying to unravel, and paying homage to that in a license plate seems only appropriate. On the bike, in my office, underground, really everywhere, I am a scientist at heart, that’s something that’s hard to not carry with you.”

He traces the connection he feels between physics and riding motorcycles back to a ride he took with his father when he was 9 or 10, something he says he had forgotten until recently.

“I remember riding the motorcycle with my dad, me up front and him steering with his arms around me,” he says. “As we rode he tried to explain the concepts of inertia and centripetal force as they related to the forces we felt on our ride. That was probably the first physics lesson I ever had, and it was on a motorcycle.”

Riding motorcycles, Mark says, is all about motion, instinct and forces. He calls it a sensation of “raw physics,” a marriage between science and instinct. One of his favorite sensations is riding through pockets of warm and cool air, feeling temperature fluctuations that couldn’t be felt riding in a car or hiking, “getting immediate feedback about the world around you and these anomalies you never thought would exist.”

What really motivates Mark, both in science and in motorcycles, is “peeling back the layers of the universe to take a peek inside and see what makes it tick.”

“I am driven to experience the universe on that raw level to really understand what it's about and for me, science and riding motorcycles are both a way to get at that,” he says. “They both give me further clues about the magnificence of the universe: how it actually exists and how the laws of physics interplay with us and the universe at large.”