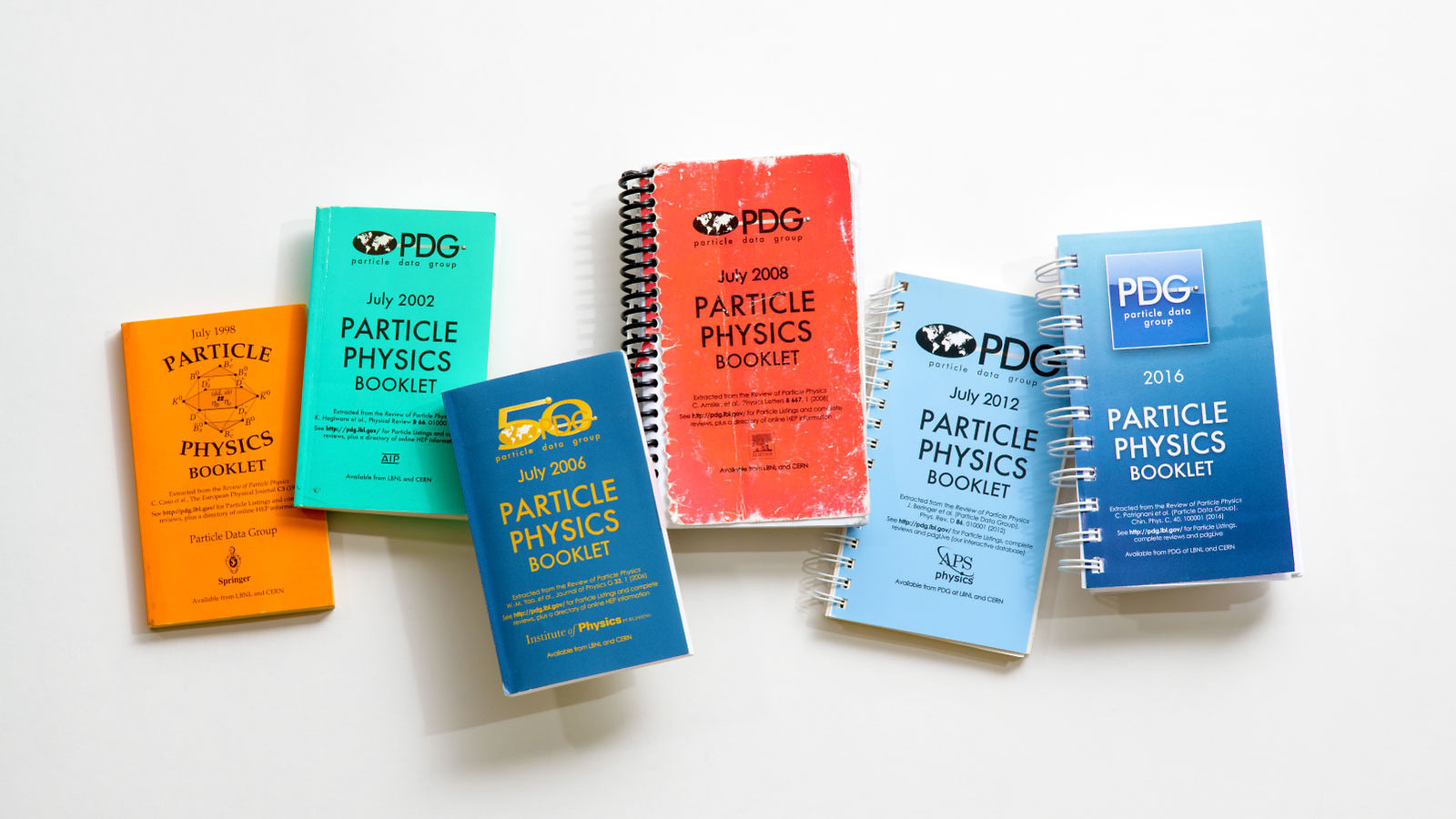 Want to know the latest research on the Higgs boson? Or the current findings on the search for dark energy?

You could search the internet, or even the latest scientific literature. Or you could find all your answers in one spot: The Review of Particle Physics, an 1800-page doorstopper compendium of measurements, tables and review articles that includes everything we currently know about the building blocks of the universe and the fundamental forces that govern it.

In an era of overwhelming information, the 60-year-old publication serves as a continually updated, curated hierarchy of research results. “In a field as large as particle physics, it’s good to have a central place to find authoritative answers and information you might need,” says Juerg Beringer, group leader of the Particle Data Group, or PDG, at Lawrence Berkeley National Laboratory, which oversees the publication. In addition to research results, PDG also covers the tools of the HEP trade, such as detectors, accelerators, probability and statistics.

And though it’s the most-cited publication in particle physics, it’s not just for scientists. The book is distributed free of charge, around the world, to anyone.

“A fair fraction of our audience is students or the general public who are interested in learning about the field,” Beringer says.

The book’s beginnings were much humbler—in fact, it was originally designed to fit in your pocket. Physicists Murray Gell-Mann and Art Rosenfeld published a Particle Properties Table in the 1957 Annual Review of Nuclear Science, which then was produced as a wallet card showing easy-to-access experimental and theoretical information on the few particles known at that time.

By 1964, thanks to an explosion of experiments, the number of known particle measurements had grown so much that the wallet card became a small book (though wallet cards could still be requested—smaller ones to fit American wallets, and larger, more readable ones for European wallets).

“Enrico Fermi once said, ‘If I could remember the names of all these particles, I would have been a botanist,’” says Michael Barnett, former head of the Particle Data Group. “And now we have many, many more particles.”

The book has continued to grow since then—usually around 10 percent per year. The Particle Data Group, which updates the Review, is led by a small team but involves an international collaboration of 223 authors from 148 institutions in 24 countries. Every year, team members scan newly published scientific articles to determine what new information should be included, and how. It might be a new measurement of a particle, or a new review of a field, like inflation. Though there may be a discussion about which information to include and when, the process is generally conflict-free, and any quibbles are placed in the footnotes.

They say you don’t feel like a particle physicist until you get your first booklet.

“Graduate students use it like a textbook,” Barnett says. “They write in the margins, bookmark pages, underline things they want to remember.” Having a physical book also encourages experiences searching on the internet can’t provide: serendipitous exploration of other topics in physics.

The smaller, spiral-bound booklet—which was originally also meant to fit into your pocket, but now at 348 pages will at least fit into your bag—is often used in classrooms as an introduction to the field.

“They say you don’t feel like a particle physicist until you get your first booklet,” Barnett says.

New information added to the book ebbs and flows with the startup and shutdown of high-energy physics facilities and experiments. In 2012 the group was about to send an edition to print when the Higgs boson discovery was announced. They stopped the presses, commissioned an addendum to the Higgs review article summarizing the discovery and were able to include it in the final manuscript before it went to press.

“That was very, very exciting for everyone,” Beringer says.

The latest edition includes more than 3000 new measurements from 721 papers and reviews on everything from the Higgs boson to Grand Unified Theories. But all the new information pushed the book’s size to 1800 pages, and it began to look more like a telephone book than a textbook.

“It became a health hazard to carry it around with you,” Beringer says. So the group took out the data tables and particle measurements; now those are just listed online. Beringer says online usage is becoming increasingly important, and they are working to make the information more easily searchable.

Budgetary constraints and the general trend toward online publishing have made it increasingly difficult to offer a free printed version of the PDG book, Beringer says. So the group is considering alternatives such as offering print-on-demand for a fee.

But the group hopes to find a way to continue printing the book for the 2018 edition, slated to publish this summer. A recent survey showed that 80 percent of respondents still want a printed booklet, and more than two-thirds want a printed book. The group also wants to continue to make the book accessible to readers who may not be able to afford the cost of printing and shipping.

Printed information, it seems, still has its place in a digital world. In fact, Barnett recently received an email from someone asking for a new booklet because their copy had been stolen.

“I’m happy to see that it’s still so valuable that someone will steal it,” he says.