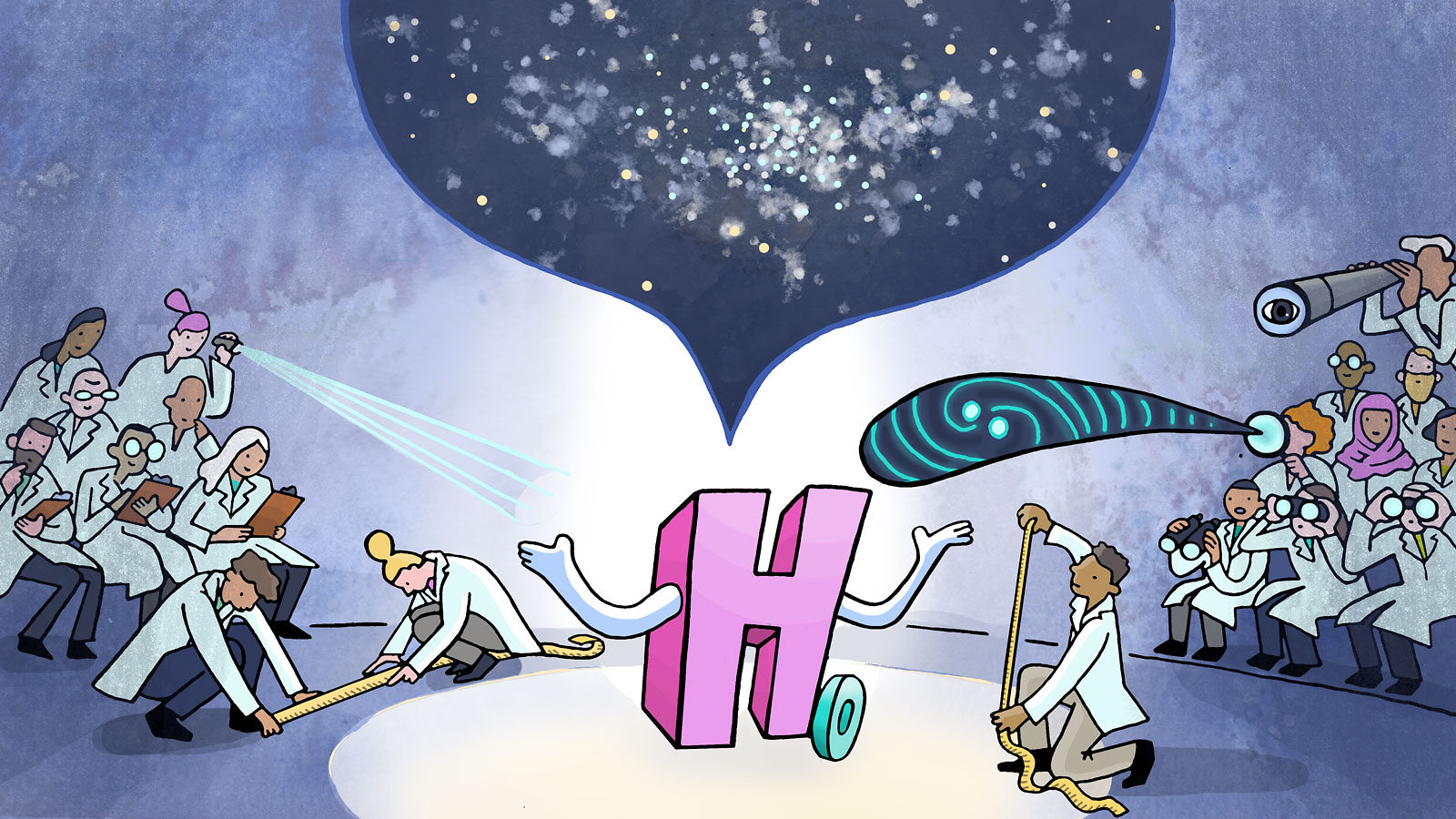 Few numbers have gotten under astronomers’ skin like the Hubble constant. In fact, experts have debated the value of this single parameter for 90 years, and for good reason.

The Hubble constant (H0) is named for astronomer Edwin Hubble. And astronomers use this value to make a variety of cosmological estimations, most critically the expansion rate and age of the universe.

If astronomers can measure this single value with great precision, they’ll be one step closer to solving some of the other grand astronomical mysteries of our age. There’s just one problem: The measurements they’ve taken don’t agree.

The SH0ES collaboration (for Supernova H0 for the Equation of State), led by Adam Riess at Johns Hopkins University, has made its most precise measurement of the Hubble constant yet. But their value is 9% larger than what’s widely accepted in the astronomical community.

And the chance of that 9% discrepancy being a fluke, as a result of pure statistical error, is unlikely—just 1 in 100,000. Which raises the question: Who is right?

Disagreements over the Hubble constant aren’t new. When Edwin Hubble published his measurement of the expansion of the universe in 1929, he got the expansion part right. But he predicted an expansion rate that’s seven times larger than what is widely accepted today. Nearly a century later, the tension around this value is still very real.

“We have so much tension and anxiety in the field that the thing that would help us the most is a good psychotherapist,” Keating says with a laugh.

In recent years, astronomers have gotten closer than ever to measuring a value that’s precise to within one to two percent. But as their measurements improve, slight differences that hadn’t mattered in the past have become significant.

Right now astronomers widely accept a Hubble constant of 67.4 kilometers per second per megaparsec. (That means the average galaxy that is 10 megaparsecs from Earth is moving away from us at a speed of 674 km/s.) But the SH0ES team reports a value of 74.03 km/s/Mpc. The difference is enough to leave many astronomers wondering if we understand our universe as well as we thought.

The two teams measure the Hubble constant in different ways. The first method uses measurements of the Cosmic Microwave Background from the Planck satellite. This tells astronomers how fast the universe was expanding 380,000 years after the Big Bang. From that, they predict how fast the universe should be expanding today, more than 13 billion years later.

In principle, these two different methods should produce the same Hubble constant value. The fact that they don’t could suggest there’s something slightly wrong with the model of the universe astronomers use to predict the Hubble constant from the CMB. Adam Riess describes it like this:

“It’s like if you had a toddler who is 2 and you measure their height. You could use your understanding of how people grow—people tend to double their height between age 2 and their final adult height—so you use that rule,” says Riess. “And then you could actually measure how tall that adult is when they reach full height. And you’d be pretty amazed if they were a foot taller than they’re expected to be. And that’s the situation we’re in.”

One way to resolve this discrepancy is to collect more measurements for comparison. And that’s exactly what many collaborations are doing. One is the H0LiCOW collaboration (for H0 Lenses in COSMOGRAIL’s Wellspring), an international team of cosmologists who study the bending of light from distant quasars around massive galaxy clusters to measure the Hubble constant in a third way.

“And they get the same answer that we get,” Riess says. “Those two approaches have nothing to do with each other, and that raises our confidence that it’s not just a simple error in one of these steps.”

The LIGO and VIRGO collaborations are attempting to measure the Hubble constant yet another way: with gravitational waves. Their early results determine a value of about 70 km/s/Mpc—basically splitting the difference between the SH0ES and Planck estimates, but with a larger level of uncertainty.

So who is right remains to be seen. But another question on some astronomers’ minds is whether or not this discrepancy is simply human error.

“If I were to put my money on it, I would say someone is underestimating their systematic error bars and maybe the tension is not as bad as it seems to be,” says Arka Banerjee, a physics postdoc at Stanford University who has everything to gain from a more accurate Hubble constant, whatever the value, in his research into particles called neutrinos.

Neutrinos have vanishingly small masses, and the measure of those masses is a major unanswered question in neutrino physics. The Hubble constant can be used to put limits on this mass—and could help scientists determine whether there is a hidden type of neutrino they have yet to discover.

Systematic errors are a big challenge when it comes to measuring the Hubble constant, Banerjee says. And right now, the two teams with the smallest statistical errors are the two that don’t agree: Planck and SH0ES.

Ultimately, it’s a waiting game to see when collaborations like Simons Observatory, H0LiCOW, LIGO and others can reach the same level of precision—and what they measure in the process.

“I don’t think it’s going to be a situation where we go, ‘Oh everything in physics is wrong!’” Riess says. “It’s a 9% difference over the whole history of the universe. To be clear, I think our basic understanding of things is right, but there’s some wrinkle here.”