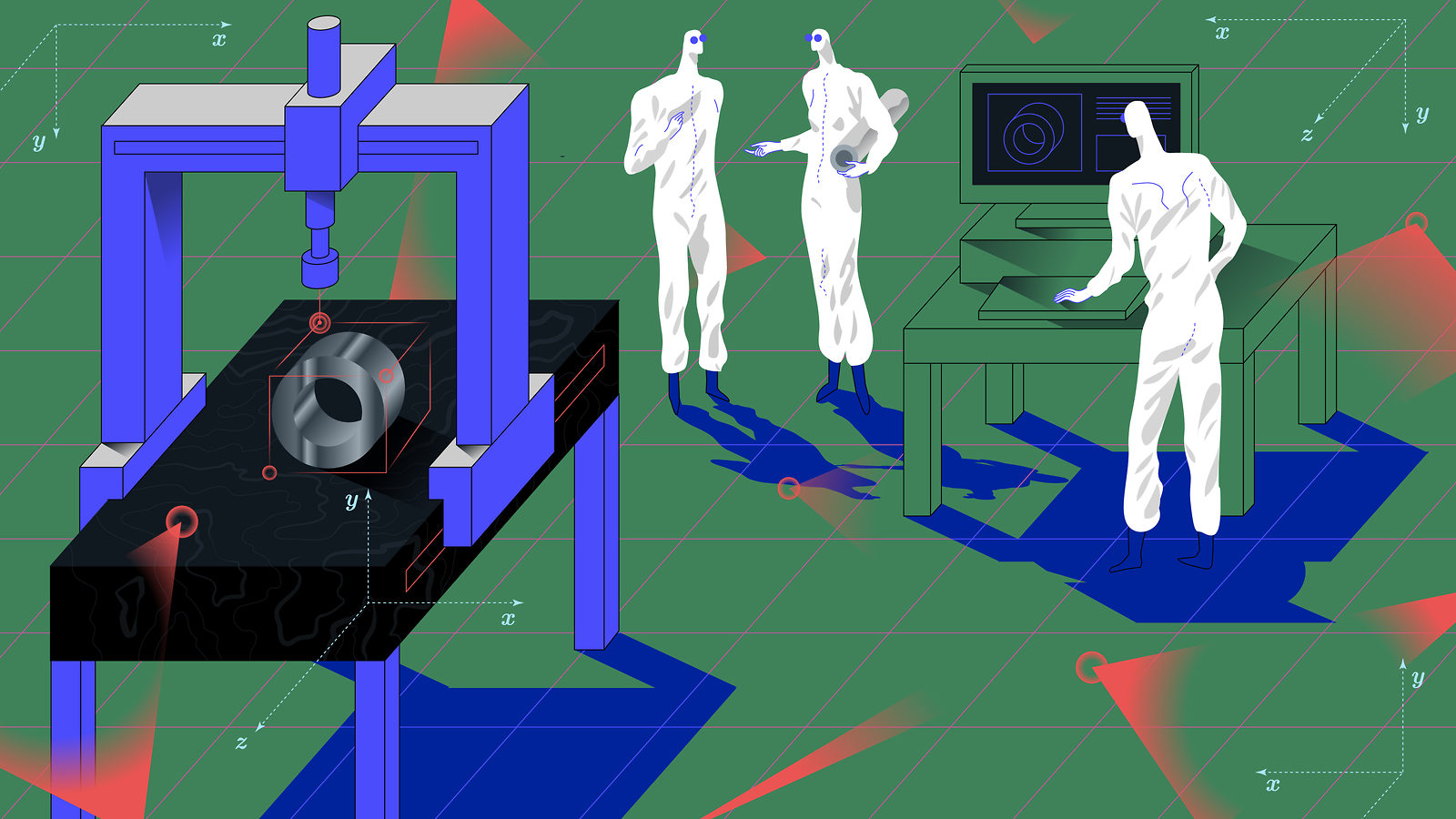 The machine consists of a slab of granite about the size of a small dining table, with a large mechanical arm suspended above. It weighs more than 3 tons and cost nearly $200,000. It sits inside a clean room at SLAC, which means that Grimm and her students have to be garbed in bunny suits to even get close to it. Its purpose? To map the geometry of objects with precision on the scale of a micron—about one hundred times smaller than a grain of table salt.

Grimm, a professor at Cal State East Bay who is also a collaborator on the ATLAS experiment at CERN, is primarily using the machine to make measurements for the upgrade of the ATLAS detector. ATLAS, one of the two major experiments at the Large Hadron Collider at CERN that co-discovered the Higgs boson, makes its own micron-scale measurements, of the trajectories of particles as they go through the detector. To make these measurements, scientists will need to know just as exactly where all the parts of the detector are located.

“We’re working on the layer of the ATLAS detector that’s closest to the interactions, so it has the greatest need for this precision,” says Michael Krunic, one of Grimm’s students. “This machine tells us the precise thickness of the material. It's the starting point of understanding the interaction between the detector and the particles produced in collisions.”

Since there’s no manual that describes the specific task they’re working on for the ATLAS experiment, Grimm and her students decided to learn by trial and error—“hours and hours of it,” Krunic says. After about six weeks, they were able to build a familiarity with the device that almost makes using it look easy.

To an outsider, the process might not seem all that different from scooping stuffed animals from a claw machine. After calibrating the machine using a well-defined object called a master ball, they use joysticks to move the ruby-tipped probe around an object, directing it to land on certain areas.

But behind the scenes, a web of sophisticated software translates these probe positions into the information they need, such as the tilt or contour of a surface.

The machine works at such a high level of accuracy that it can be used for designing nuclear weapons. Because of this, the machine is export-controlled and contains a vibration detection unit to deter unauthorized transport.

“If you try to move the machine, it will notice that it’s been picked up and shut itself off,” says Charles Young, a SLAC physicist who also works on the ATLAS experiment. “If there’s an earthquake or even if someone just bumps into it, it will shut down and cannot be turned back on unless you call the manufacturer and they send an engineer to reset it.”

Grimm, whose work on the ATLAS collaboration has been primarily data analysis until now, says she enjoys being able to see these detector components firsthand.

“Normally, I do reconstructions using the data from these very first layers of the detector, but I’ve never actually seen them or touched them,” she says. “It’s been so cool to actually be involved in the hardware preparation.”

Su Guanhao, another student working on the project, says the entire process of working with the machine, rough start and all, has been valuable for him and the other students as they figure out their next steps after graduating.

“This is a very different environment from the labs we typically work in at school,” he says. “It’s been a really great hands-on experience to work through these problems and learn how to use this machine.”