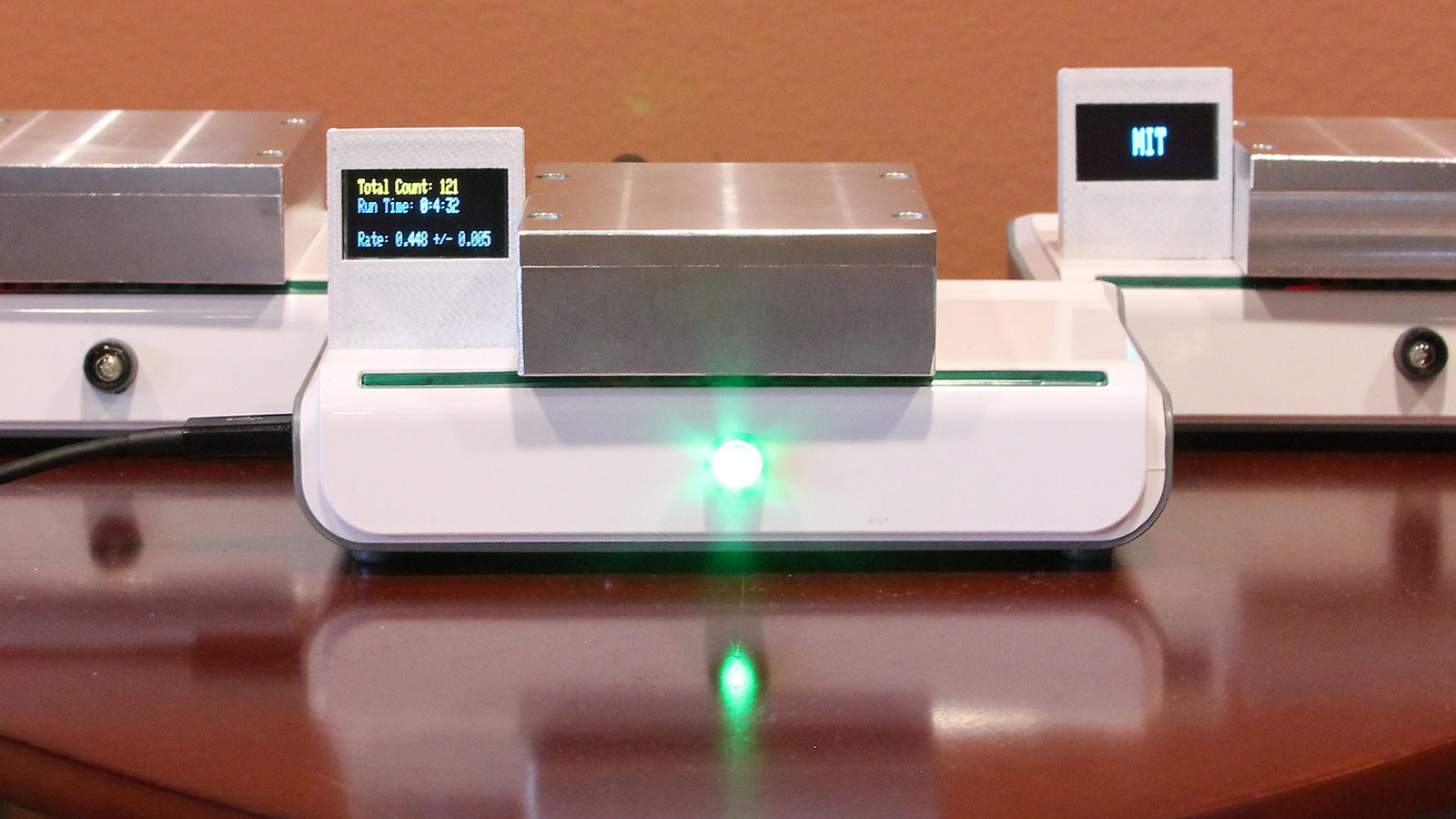 When Spencer Axani was an undergraduate physics student, his background in engineering led him to a creative pipe dream: a pocket-sized device that could count short-lived particles called muons all day.

Muons, heavier versions of electrons, are around us all the time, a byproduct of the cosmic rays that shoot out from supernovae and other high-energy events in space. When particles from those rays hit Earth’s atmosphere, they often decay into muons.

Muons are abundant on the surface of the Earth, but in Axani’s University of Alberta underground office, shielded by the floors above, they might be few and far between. A pocket detector would be the perfect gadget for measuring the difference.

Now a doctoral student at Massachusetts Institute of Technology, Axani has nearly made this device a reality. Along with an undergraduate student and Axani’s adviser, Janet Conrad, he’s developed a detector that sits on a desk and tallies the muons that pass by. The best part? The whole system can be built by students for under $100.

“Compared to most detectors, it’s by far the cheapest and smallest I’ve found,” Axani says. “If you make 100,000 of these, it starts becoming a very large detector. Instrumenting airplanes and ships would let you start measuring cosmic ray rates around the world.”

Particle physicists deal with cosmic rays all of the time, says Conrad, a physics professor at MIT. “Sometimes we love them, and sometimes we hate them. We love them if we can use them for calibration of our detectors, and we hate them if they provide a background for what it is that we are trying to do.”

The idea was to create muon detectors to add to IceCube, a neutrino detector built into the ice in Antarctica. They would be inserted into IceCube’s proposed low-energy upgrade, known as PINGU (Precision IceCube Next Generation Upgrade).

First, they needed a prototype. Axani got to work and quickly devised a rough detector housed in PVC pipe. “It looked pretty lab,” Axani said. It also gave off a terrible smell, the result of using a liquid called toluene as a scintillator, a material that gives off light when hit by a charged particle.

Over the next few months, Axani refined the device, switching to an odorless plastic scintillator and employing silicon photomultipliers (SiPM), which amplify the light from the scintillator into a signal that can be read. Adding some electronics allowed him to build a readout screen that ticks off the amount of energy from muon interactions and registers the time of the event.

Sitting in Axani’s office, the counter shows a rate of one muon every few seconds, which is what they expected from the size of the detector. Though it’s fairly constant, even minor changes like increased humidity or heavy rain can alter it.

Conrad and Axani have taken the detector down into the Boston subway, using the changes in the muon count to calculate the depth of the train tunnels. They’ve also brought it into the caverns of Fermilab’s neutrino experiments to measure the muon flux more than 300 feet underground.

Axani wants to take it to higher elevations—say, in an airplane at 30,000 feet above sea level—where muon counts should be higher, since the particles have had less time to decay after their creation in the atmosphere.

Fermilab physicist Herman White suggested taking one of the the tiny detectors on a ship to study muon counts at sea. Mapping out the muon rate around the globe at sea has never been achieved. Liquid scintillator can be harmful to marine life, and the high voltage and power consumption of the large devices present a safety hazard.

While awaiting review of the PINGU upgrade, both Conrad and Axani see value in their project as an educational tool. With a low cost and simple instructions, the muon counter they created can be assembled by undergraduates and high school students, who would learn about machining, circuits, and particle physics along the way—no previous experience required.

“The idea was, students building the detectors would develop skills typically taught in undergraduate lab classes,” Spencer says. “In return, they would end up with a device useful for all sorts of physics measurements.”

Conrad has first-hand knowledge of how hands-on experience like this can teach students new skills. As an undergraduate at Swarthmore College, she took a course that taught all the basic abilities needed for a career in experimental physics: using a machine shop, soldering, building circuits. As a final project, she constructed a statue that she’s held on to ever since.

Creating the statue helped Conrad cement the lessons she learned in the class, but the product was abstract, not a functioning tool that could be used to do real science.

“We built a bunch of things that were fun, but they weren’t actually useful in any way,” Conrad says. “This [muon detector] takes you through all of the exercises that we did and more, and then produces something at the end that you would then do physics with.”

Axani and Conrad published instructions for building the detector on the open-source physics publishing site arXiv, and have been reworking the project with the aim of making it accessible to high-school students. No math more advanced than division and multiplication is needed, Axani says. And the parts don’t need to be new, meaning students could potentially take advantage of leftovers from experiments at places like Fermilab.

“This should be for students to build,” Axani says. “It’s a good project for creative people who want to make their own measurements.”