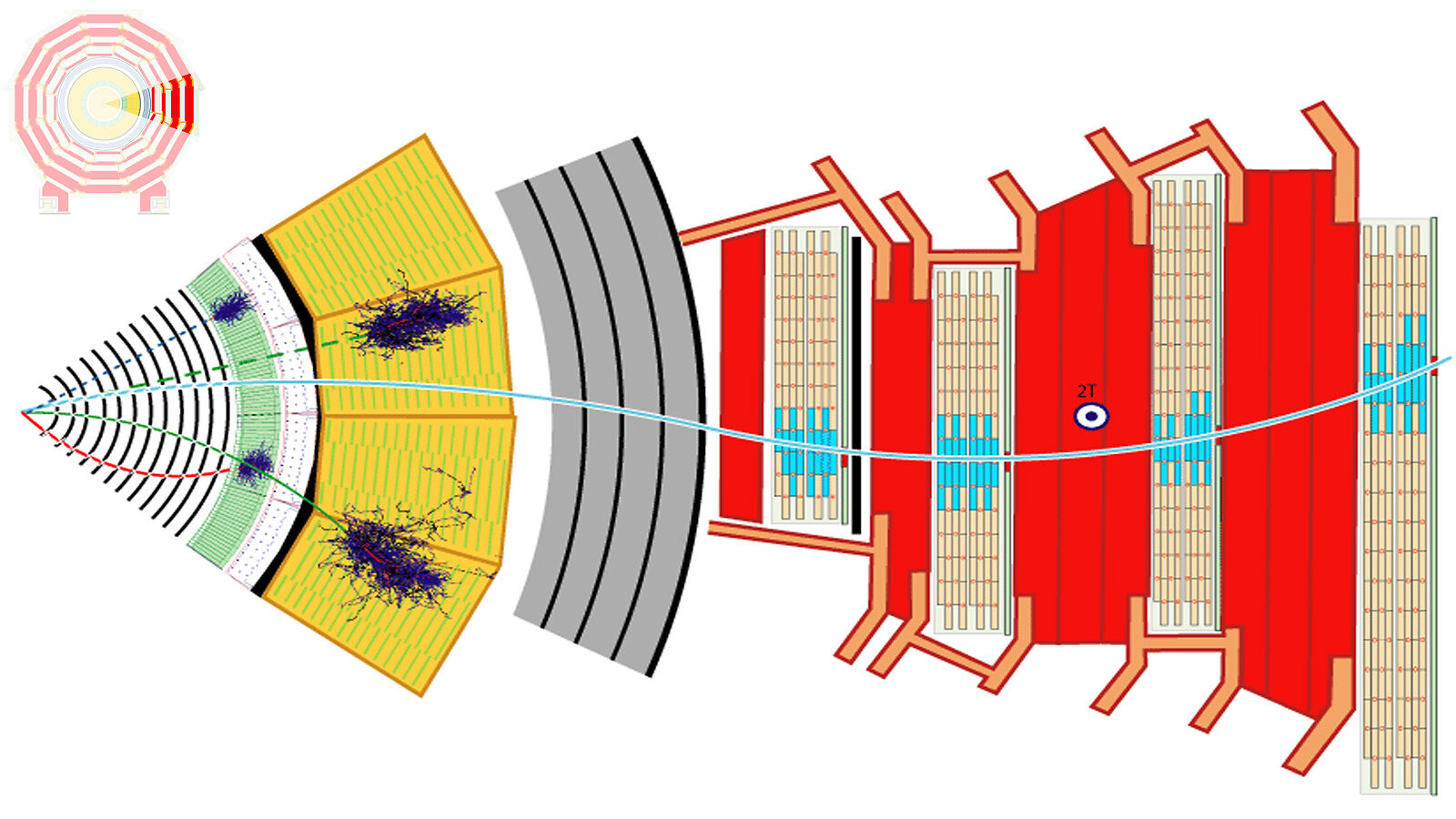 Physicist Cristián Peña grew up in Talca, a small town a few hours south of Santiago, Chile. “The Andes run all the way through the country,” he says. “No matter where you look, you always have the mountains.”

At the age of 13, he first aspired to climb them.

Over the years, as his mountaineering skills grew, so did his inventory of tools. Ice axes, crampons and ropes expanded his horizons.

In Peña’s work as a scientist at the US Department of Energy’s Fermi National Accelerator Laboratory, he applies this same mindset: He creates the tools his experiment needs to explore new terrain.

“Detector work is key,” he says.

Peña’s current focus is the CMS detector, one of two large, general-purpose detectors at the Large Hadron Collider. Peña and colleagues want to use CMS to search for a class of theoretical particles with long lifetimes.

While working through the problem, they realized that an ideal long-lived particle detector is already installed inside CMS: the CMS muon system. The question was whether they could hack it to do something new. 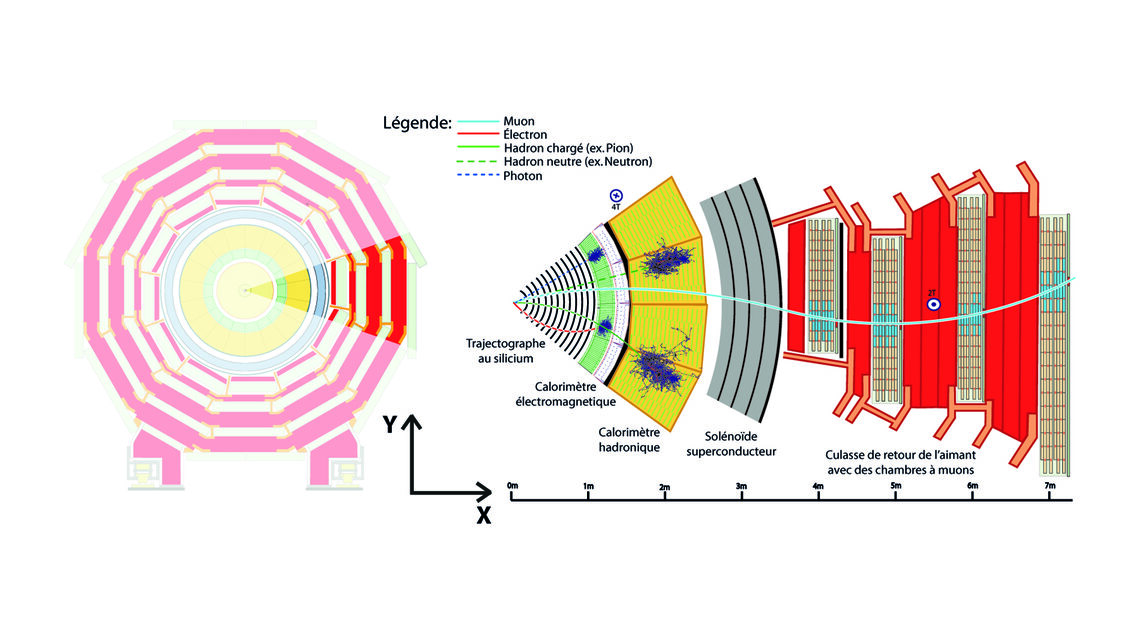 When scientists designed the CMS detector in the 1990s, they had the most popular and mathematically resilient models of particle physics in mind. As far as they knew, the most interesting particles would live just a fraction of a fraction of a second before transforming into well understood secondary particles, such as photons and electrons. CMS would catch signals from those secondary particles and use them as a trail back to the original.

The prompt-decay assumption worked in the search for Higgs bosons. But scientists are now realizing that this “live fast, die young” model might not apply to every interesting thing that comes out of a collision at the LHC. Peña says he sees this as a sign that it’s time for the experiment to evolve.

“If you’re a little kid and you walk a mile in the forest, it’s all completely new,” he says. “Now we have more experience and want to push new frontiers.”

For CMS scientists, that means finding better ways to look for particles with long lifetimes.

Long-lived particles are not a radical new concept. Neutrons, for example, live for about 14 minutes outside the confines of an atomic nucleus. And protons are so long-lived that scientists aren’t sure whether they decay at all. If undiscovered particles are moving into the detector before becoming visible, they could be hiding in plain sight.

“Previously, we hadn’t really thought to look for long-lived particles,” says Christina Wang, a graduate student at Caltech working on the CMS experiment. “Now, we have to find new ways to use the CMS detector to see them.”

Peña was thinking about long-lived particles while attending a conference in Aspen, Colorado, in March 2019.

“There were a bunch of whiteboards, and we were throwing around ideas,” he says. “In that type of situation, you go with the vibe. There’s a lot of creativity and you start thinking outside the box.”

Peña and his colleagues visualized what an ideal long-lived particle detector might look like. They would need a detector that was far from the collision point. And they would need shielding to filter out the secondary particles that are the stars of the show in traditional searches.

“When you look at the CMS muon system,” Peña says, “that’s exactly what it is.”

Muons, often called the heavier cousins of electrons, are produced during the high-energy collisions inside the LHC. A muon can travel long distances, which is why CMS and its sister experiment, ATLAS, have massive detectors in their outer layers solely dedicated to capturing and recording muon tracks.

Peña ran a quick simulation to see if the CMS muon system would be sensitive to the firework-like signatures of long-lived particles. “It was quick and dirty,” he says, “but it looked feasible.”

“I was always encouraged to give ideas to young, talented people and let them run with it,” Peña says.

Suri was excited to take on the challenge. “I was in love with the originality of the project,” he says. “I was eager to sink my teeth into it.”

Suri started by scanning event displays of simulated long-lived particle decays to look for any shared visual patterns. He then explored the original technical design report for the CMS muon detector system to see just how sensitive it could be to these patterns.

“Looking at the unique detector design and highly sensitive elements, I was able to realize what a powerful tool it was,” he says.

By the end of the summer, Suri’s work had shown that not only was it feasible to use the muon system to detect long-lived particles, but that CMS scientists could use pre-existing LHC data to get a jump start on the search.

“At this point, the floodgates opened,” Suri says.

In fall 2019, Wang took the lead on the project. Suri had shown that the idea was possible; Wang wanted to know if it was realistic.

So far, they had been working with processed data from the muon system, which was not adapted to the kind of search they wanted to do. “All the reconstruction techniques used in the muon system are optimized to detect muons,” Wang says.

“They were really surprised that we wanted to use the muon system to infer long-lived particles,” Wang says. “They were like, ‘It’s not designed to do that.’ They thought it was a  weird idea.”

The experts suggested the team should try looking at the raw data instead.

Doing so would require extracting unprocessed information from tapes and then developing new software and simulations that could reinterpret thousands of raw detector hits. The task would be arduous, if not impossible.

After the muon system experts left the call, Wang remembers, “we were still in the Zoom room and like, ‘Do we want to continue this?’”

She says it was not a serious question. Of course they did.

A trigger of their own

In fall 2020, Martin Kwok started a postdoctoral position at Fermilab. “We’re encouraged to talk to as many groups as we can and think about what we want to work on most,” he says.

He met with Fermilab researcher Artur Apresyan, who told him about the collaboration with Caltech to convert the CMS muon system into a long-lived particle detector. “It was immediately attractive,” Kwok says. “It’s not very often that we get to explore new uses for our detector.”

Wang and her colleagues had forged ahead with the idea, extracting, processing, and analyzing raw data recorded by the CMS muon system between 2016 and 2018.

It had worked, but the dataset they had available to study was not ideal.

The LHC generates around a billion collisions every second—much more than scientists can record and process. So scientists use filters called triggers to quickly evaluate and sort fresh collision data.

For every billion collisions, only about 1000 are deemed “interesting” by the triggers and saved for further analysis. Wang and her colleagues had determined the filters closest to what they were looking for were the ones programmed to look for signs of dark matter.

Apresyan pitched to Kwok that he could design a new trigger, one actually meant to look for signs of long-lived particles. They could install it in the CMS muon system before the LHC restarts operation in spring 2022.

With a dedicated trigger, they could increase the number of events deemed “interesting” for long-lived particle searches by up to a factor of 30. “It’s not often that we see a 30-times increase in our ability to capture potential signal events,” Kwok says.

Kwok was up for the challenge. And it was a challenge.

The CMS collaboration consists of thousands of scientists all using collective research tools that they developed and honed over the last two decades. “It’s a bit like building with Legos,” Kwok says. “All the pieces are there, and depending on how you use and combine them, you can make almost anything.”

But developing this specialized trigger was less like picking the right Legos and more like creating a new Lego piece out of melted plastic.

Kwok dug into the experiment’s archives in search of his raw materials. He found an old piece of software that had been developed by CMS but rarely used. “This left-over tool that faded out of popularity turned out to be very handy,” he says.

Kwok and his collaborators also had to investigate if integrating a new trigger into the muon system was even possible. “There’s only so much bandwidth in the electronics to send information upstream,” Kwok says.

“I’m thankful that our collaboration ancestors designed the CMS muon system with a few unused bits. Otherwise, we would have had to reinvent the whole triggering scheme.”

“Because we don’t have dedicated long-lived particle triggers yet, we have a low efficiency,” Wang says. “But we showed that it’s possible—and not only possible, but we are overhauling the CMS trigger system to further improve the sensitivity.”

The LHC is scheduled to continue into the 2030s, with several major accelerator and detector upgrades along the way. Wang says that to keep probing nature at its most fundamental level, scientists must remain at the frontier of detector technology and question every assumption.

“Then new areas to explore will naturally follow,” she says. “Long-lived particles are just one of these new areas. We’re just getting started.”