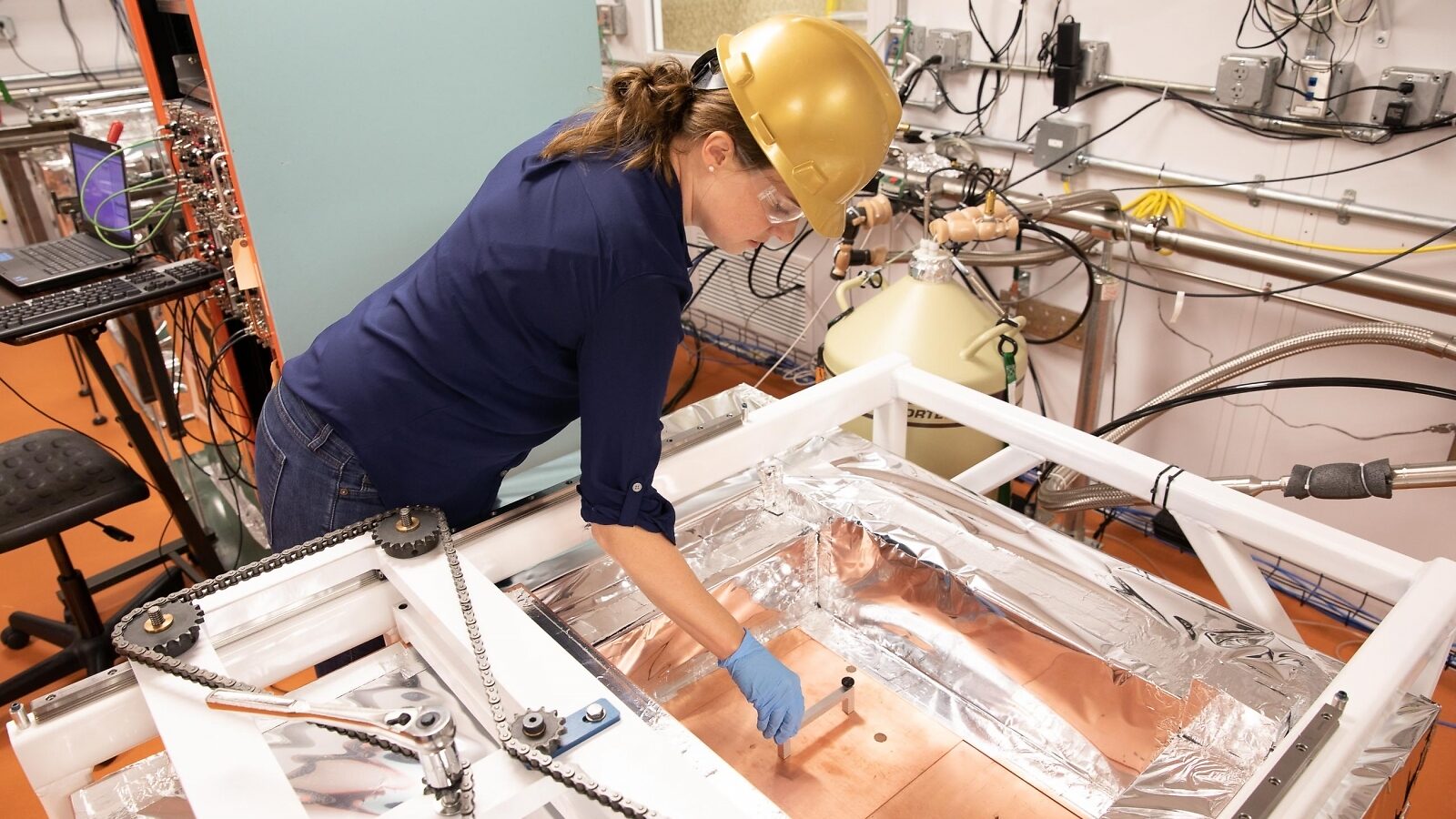 The subatomic world just got a lot quieter for the LUX-ZEPLIN (LZ) dark matter experiment.

Currently being assembled on the 4850 Level, 4850 feet below the surface at the Sanford Underground Research Facility, LZ will search for theoretical dark matter particles known as WIMPs, or weakly interacting massive particles.

In a paper accepted for publication in the European Physics Journal, the LZ collaboration shares the results of more than 1200 assays—tests that describe the levels of radioactive decay of the LZ detector components—with the scientific community. These results also effectively create a library of resources for future experiments.

“This effort dramatically increases our ability to seek out dark matter signals in our detector,” says Kevin Lesko, spokesperson for the LZ collaboration and lead for the effort to achieve a low radioactive background for the LZ experiment.

“The whole experiment participated in this effort; everyone understood the importance of achieving a very low background level and a strong background model,” he added. Lesko is also a senior scientist at the Department of Energy’s Lawrence Berkeley National Laboratory, the lead institution for the LZ project, which is supported by DOE’s Office of Science.

The quantum soundscape is a boisterous one.

A constant barrage of cosmic rays from our sun showers the Earth, reverberating through matter. Atoms decay and reconfigure. Protons pop free from one nucleus only to be picked up by another. Electrons, stripped from their orbit, are sent ricocheting through surrounding matter. And though we normally think of radiation in the context of X-ray machines and nuclear power sources, everything—from bananas to skin cells to dust—contributes to a constant hum of background radiation in our world.

Most of us are oblivious to this ongoing racket. Particle physicists are not.

Experiments searching for extremely rare particle interactions (like interactions with dark matter particles) are most bothered by this noise. When they tune their experiments to eavesdrop on the particle world, they get a deafening cacophony that obscures the very signal they want to hear. Physicists call this effect background.

Turning down the volume

Before looking for dark matter, LZ physicists needed to turn down the background volume.

First, LZ researchers constructed the experiment’s inner detector inside a class-1000 clean room, requiring everyone to wear a full body clean suit before entering. This prevented dust, a source of radioactive decay, from accumulating on the detector. During months of assembly, less than one gram of dust accumulated on the surface of the 5000 pound, 9-foot-tall inner detector after remedial cleaning.

Next, the detector was transported nearly a mile underground to the 4850 Level of Sanford Lab. There, the rock overburden shields the experiment from the sun’s cosmic rays. In the underground cavern, they inserted the detector inside a water tank that will be filled with more than 200 tons of deionized water. This liquid shield will absorb radiation emanating from the cavern’s rock or other experiment support systems.

But what about the detector itself? How could researchers be sure the materials used to build the detector wouldn’t create backgrounds of their own? 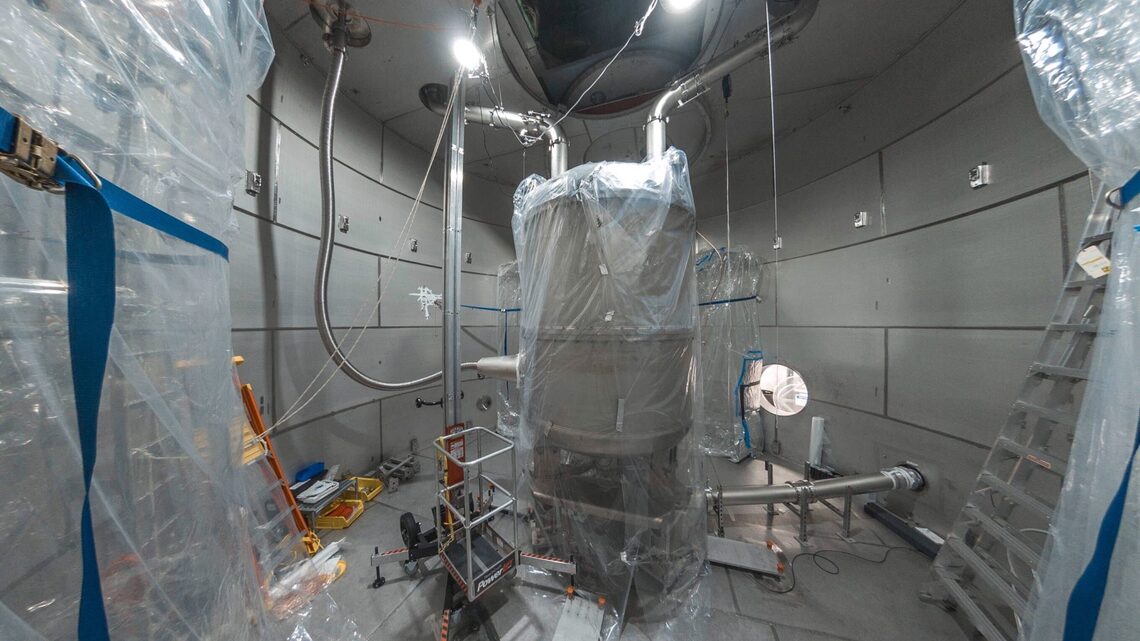 LZ’s central detector, pictured here during assembly, is located inside a large water tank on the 4850 Level of Sanford Lab. LZ will search for theoretical dark matter particles known as WIMPs.

“Early on, we decided we wanted the backgrounds in the experiment to be dominated by nature—by things we can’t eradicate, like neutrinos—not by the materials we were using to build the detector,” Lesko says.

The collaboration’s recent paper is the result of efforts to assay, or test, nearly every component that went into the detector.

“We required every subsystem to send in samples for testing,” Lesko says. “At this point, we’ve assayed every nut, every screw, every washer, every component. We either have a characteristic assay of the raw materials, or of the finished component.”

Of the 1200 assays in the publication, 969 assays used high-purity germanium (HP Ge) to examine the radiopurity of components. Roughly 70% of the HP Ge assays were completed by the BHUC on the 4850 Level of Sanford Lab. Working one sample at a time, researchers placed LZ’s components inside detectors for weeks at a time, quietly listening to and recording the noise they produced.

“In the past five years, the majority of the samples counted at the BHUC have been for the LZ experiment,” says Brianna Mount, director of the BHUC. “This paper is the culmination of that effort, and it demonstrates what the BHUC is capable of doing for the scientific community.”

Using this process, researchers learned that some materials were 10 to 100 times more radioactive than others. This helped researchers make informed decisions when selecting materials. In some cases, they even worked with manufacturers to redesign components to have lower backgrounds. Finally, researchers tallied the collective backgrounds of all the components to better understand how much interference they can expect to see when they turn on the detector.

“This effort gives us a very strong prediction of the limits of the radioactive components as we try to decipher dark matter signals from backgrounds,” Lesko says.

Editor's note: This article has been adapted from articles published by Sanford Underground Research Facility and Berkeley Lab.