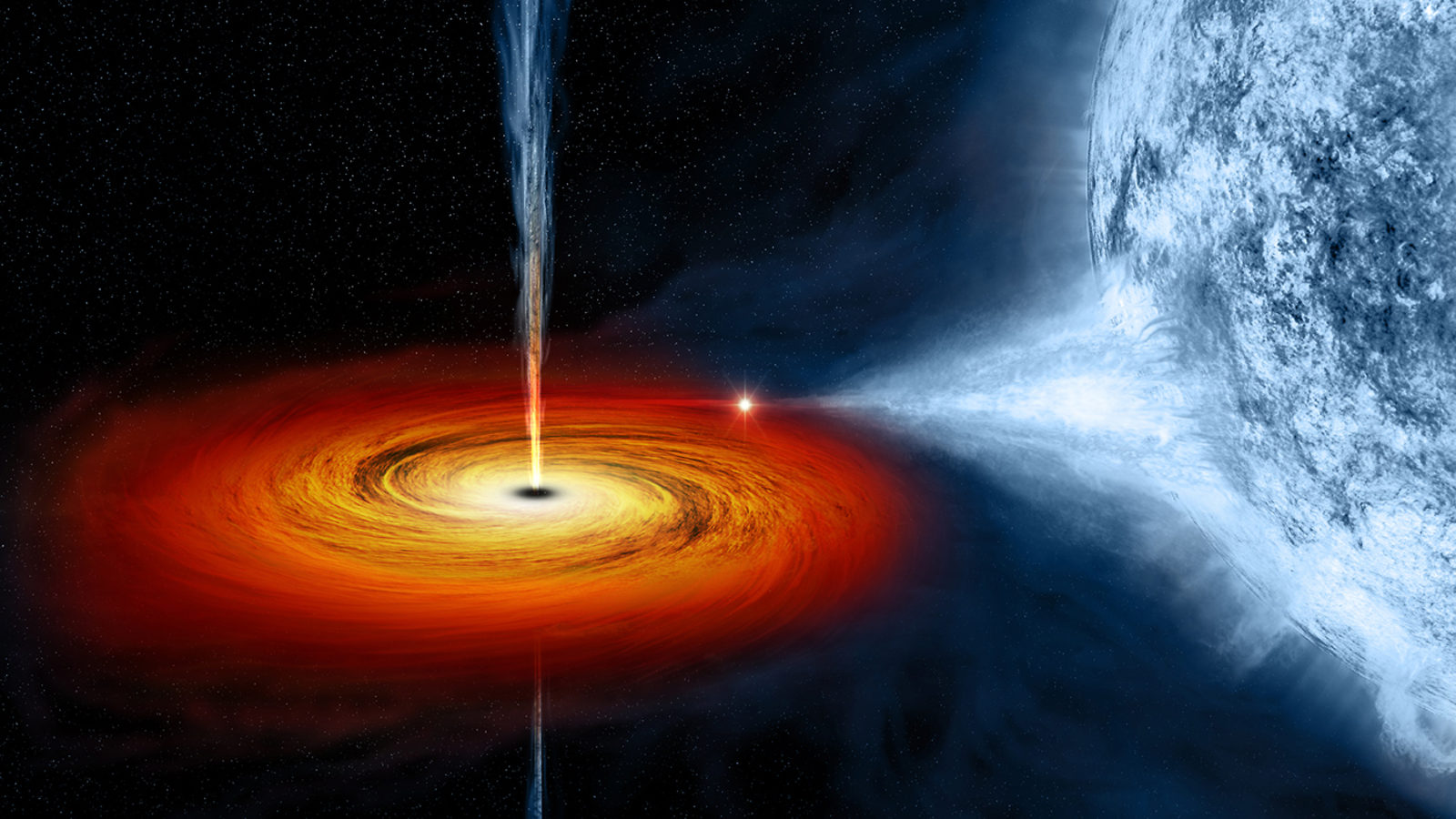 Black holes fascinate us. We easily conjure up images of them swallowing spaceships, but we know very little about these strange objects. In fact, we’ve never even seen a black hole form. Scientists on neutrino experiments such as the upcoming Deep Underground Neutrino Experiment hope to change that.

“You’ve got to be a bit lucky,” says Mark Thomson, DUNE co-spokesperson. “But it would be one of the major discoveries in science. It would be absolutely incredible.”

Black holes are sometimes born when a massive star, typically more than eight times the mass of our own sun, collapses. But there are a lot of questions about what exactly happens during the process: How often do these collapsing stars give rise to black holes? When in the collapse does the black hole actually develop?

What scientists do know is that deep in the dense core of the star, protons and electrons are squeezed together to form neutrons, sending ghostly particles called neutrinos streaming out. Matter falls inward. In the textbook case, matter rebounds and erupts, leaving a neutron star. But sometimes, the supernova fails, and there’s no explosion; instead, a black hole is born.

DUNE’s gigantic detectors, filled with liquid argon, will sit a mile below the surface in a repurposed goldmine. While much of their time will be spent looking for neutrinos sent from Fermi National Accelerator Laboratory 800 miles away, the detectors will also have the rare ability to pick up a core collapse in our Milky Way galaxy – whether or not that leads to a new black hole.

The only supernova ever recorded by neutrino detectors occurred in in 1987, when scientists saw a total of 19 neutrinos. Scientists still don’t know if that supernova formed a black hole or a neutron star—there simply wasn’t enough data. Thomson says that if a supernova goes off nearby, DUNE could see up to 10,000 neutrinos.

DUNE will look for a particular signature in the neutrinos picked up by the detector. It’s predicted that a black hole will form relatively early in a supernova. Neutrinos will be able to leave the collapse in great numbers until the black hole emerges, trapping everything—including light and neutrinos—in its grasp. In data terms, that means you’d get a big burst of neutrinos with a sudden cutoff.

Neutrinos come in three types, called flavors: electron, muon and tau. When a star explodes, it emits all the various types of neutrinos, as well as their antiparticles.

They’re hard to catch. These neutrinos arrive with 100 times less energy than those arriving from an accelerator for experiments, which makes them less likely to interact in a detector.

Most of the currently running, large particle detectors capable of seeing supernova neutrinos are best at detecting electron antineutrinos—and not great at detecting their matter equivalents, electron neutrinos.

“It would be a tragedy to not be ready to detect the neutrinos in full enough detail to answer key questions,” says John Beacom, director of the Center for Cosmology and Astroparticle Physics at The Ohio State University.

Luckily, DUNE is unique. “The only one that is sensitive to a huge slug of electron neutrinos is DUNE, and that’s a function of using argon [as the detector fluid],” says Kate Scholberg, professor of physics at Duke University.

It will take more than just DUNE to get the whole picture, though. Getting an entire suite of large, powerful detectors of different types up and running is the best way to figure out the lives of black holes, Beacom says.

There is a big scintillator detector, JUNO, in the works in China, and plans for a huge water-based detector, Hyper-K, in Japan. Gravitational wave detectors such as LIGO could pick up additional information about the density of matter and what’s happening in the collapse.

“My dream is to have a supernova with JUNO, Hyper-K and DUNE all online,” Scholberg says. “It would certainly make my decade.”

The rate at which neutrinos arrive after a supernova will tell scientists about what’s happening at the center of a core collapse—but it will also provide information about the mysterious neutrino, including how they interact with each other and potential insights as to how much the tiny particles actually weigh.

Within the next three years, the rapidly growing DUNE collaboration will build and begin testing a prototype of the 40,000-ton liquid argon detector. This 400-ton version will be the second-largest liquid-argon experiment ever built to date. It is scheduled for testing at CERN starting in 2018.

DUNE is scheduled to start installing the first of its four detectors in the Sanford Underground Research Facility in 2021.