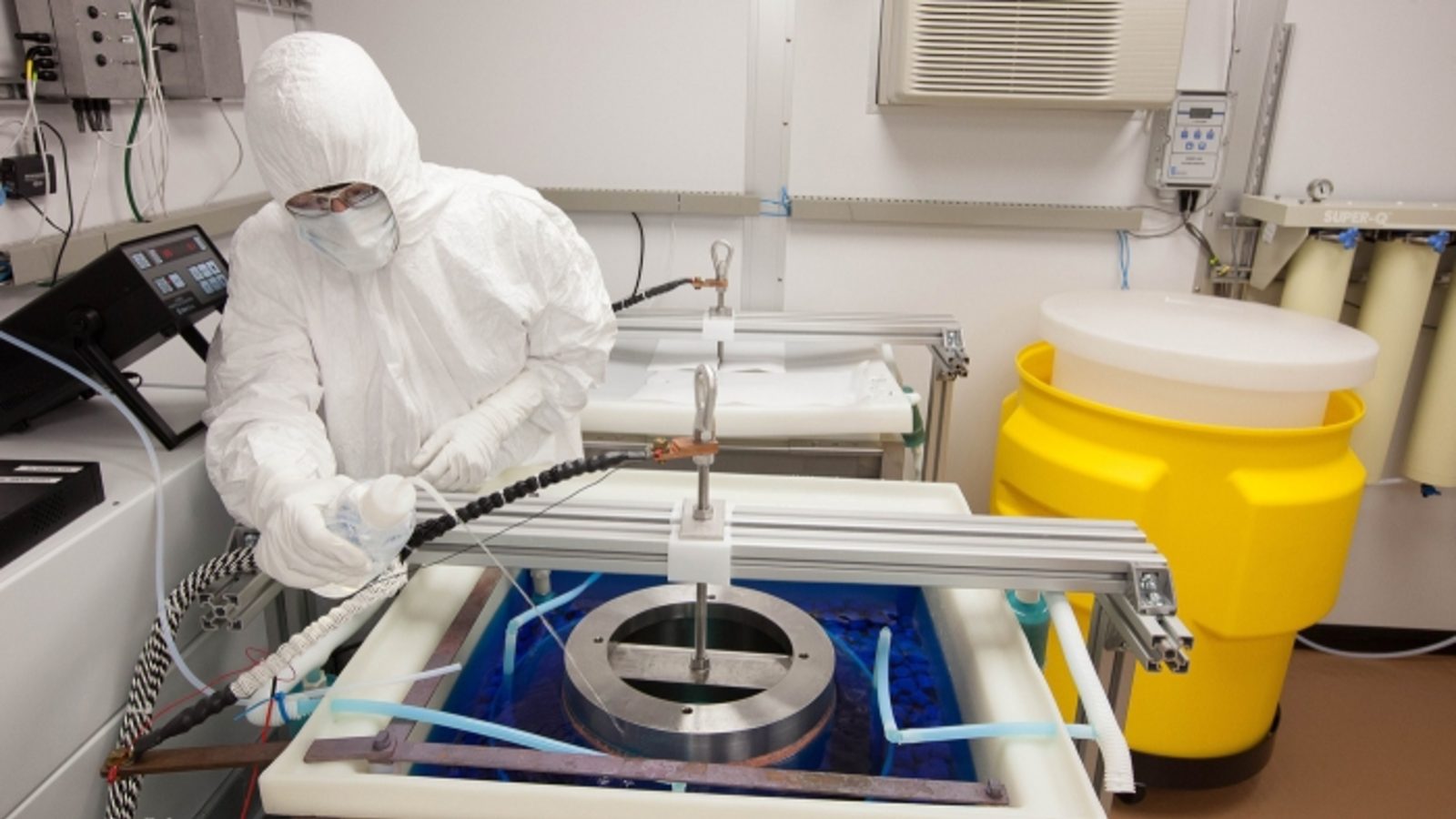 Getting into the Majorana Demonstrator clean room is an adventure. Unless you have to do it every day for work, in which case, it’s probably a chore.

It all starts in Lead, South Dakota, a town once built around and seemingly forever linked to the underground. It’s 10 miles from Sturgis, which celebrated its 75th annual motorcycle rally in August by welcoming almost 1 million bikers. It’s three miles from Deadwood, the 1870s, Wild West version of which is the setting for the eponymous HBO show (though it’s filmed in California).

Lead, pronounced so that it rhymes with reed and not red, is home to a former goldmine turned science lab. A mile below the surface, it hosts an immaculate clean room where scientists are assembling a detector to find what could be one of the rarest processes in nature, if it occurs at all. Their laboratory is 3230 square feet of scrubbed floor and filtered air, filled with glove boxes, a chemistry lab, hand-machined parts and a big shield made of lead bricks that looked like a pizza oven before it was wrapped in a few additional layers of insulation.

It’s a unique environment with a bizarre commute. The road to Sanford Lab winds past old brick and timber buildings and the modern Sanford Lab Visitors Center before climbing a steep hill to Summit Avenue. An abrupt left takes scientists through the gate to the set of brick administration buildings and the gateway to the Yates shaft, a tall, white beacon in the Black Hills.

After descending a few creaky flights of stairs with bright yellow handrails, scientists gear up. Those who didn’t arrive in dark coveralls with reflective yellow bands slide them on, along with a hard hat, lamp, wraparound safety glasses, a belt or backpack with a rescue breather, and (often) steel-toe boots. Backpacks, lunches, laptops and other gear are placed in thick plastic bags to protect them on the trip down the shaft. Scientists take one of their metal tags from the “Out” board and place it in their pocket, while the twin tag goes on the “In” board, a record of those living the mole lifestyle for the day.

Then it’s through a series of heavy sliding doors to the staging area where everyone boards the cage—tall people toward the back, shorties in the front. The cage operator talks to the hoist operator, who frees the box and sends it smoothly down through the rock and timber supports.

It’s a damp yet delightful ride, strangely reminiscent of the Haunted Mansion at Disneyland. For 10 minutes, slabs of wet wood stream past, many with colorful numbers or letters marking repair work or the level of descent. The dizzying streaks are punctuated by black holes, drifts once mined for gold that now disappear into the earth. And for the entire ride, water splatters in, kissing faces and climbing up any coverall leg long and foolish enough to touch the floor.

One can only imagine how it was for miners descending at three times the speed. 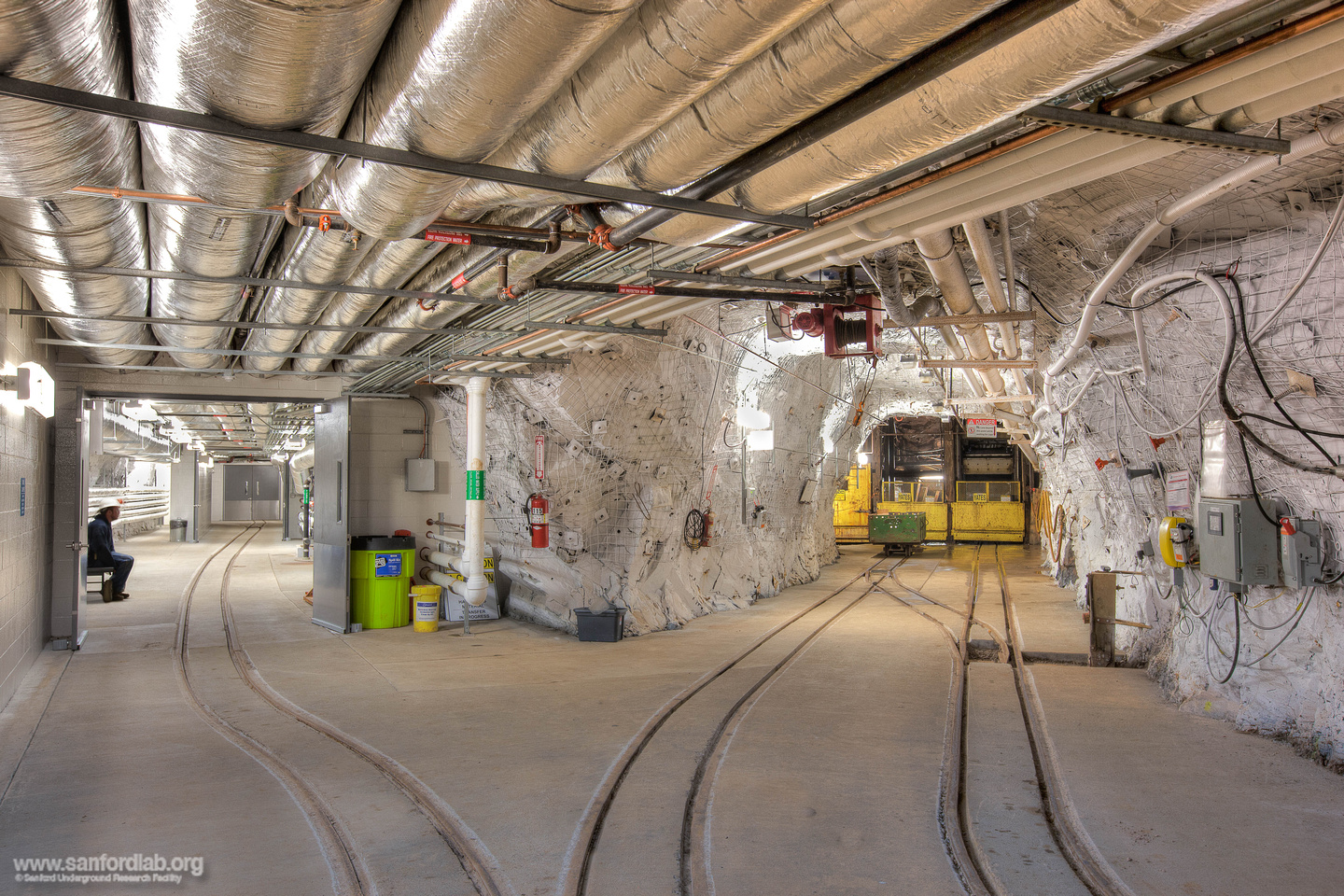 A mile below, the cage slows and gently settles near a spot called The Big X, where pathways split and run deep into the darkness or toward the well-lit lab areas. Researchers—and engineers, construction workers, guides and other myriad folk who pass through—run their feet through a boot wash before heading toward the scientific portion of the underground. Then it’s a quick stripping of the coveralls, a helmet exchange, a slip of two pairs of booties around the shoes, and the debagging process—complete with a brief alcohol swipe for object exteriors.

Another set of doors reveals the shiny brown hallway leading to the experiments. Thin tables run along their exterior in the hallway, the home for researchers working on laptops when not completing the day’s other tasks. A morning meeting to discuss the day’s plan, and then it’s on to the next costume change.

The machinist and his assistant often head in first. Randy Hughes is the sole machinist underground at Majorana (and perhaps the only machinist working a mile underground anywhere in the world, let alone at a scientific experiment), and he has a tight schedule for creating parts out of special copper electroformed underground, away from radiation.

Then the scientists get changed. The clean room is not so different from those on the surface—it has special air filtration and is kept free of particulate matter through special procedures and handy yet unexpected items like clean room paper and clean room pens.

The Majorana lab is a class 100-400 clean room, meaning there can be only 100 to 400 particles larger than half a micron per cubic foot (by comparison, a human hair is 100 microns). Typically, the room has only 100 to 200 particles. Humans are by far the dirtiest things that enter, causing the particle count to spike even with all the precautions.

First, scientists step through plastic sheeting into a space barely large enough to fit a full-size bed. Sticky blue sheets on the ground pull any dirt off the booties, but scientists still pull off the outer pair and replace them with a fresh set. Helmets come off and are swabbed with alcohol, and hairnets go on.

Facemasks slide over the nose and mouth. Because the wraparound safety glasses are still required in the lab, many people opt to tape the upper portion of the facemask down around their nose and cheeks, preventing hot air from rising up the channel and fogging their glasses. Over that goes a full head hood, leaving an oval of space for the glasses to pop out. The hood tucks into a clean pair of white coveralls that zip up. White booties slide up over the legs, the elastic holding them around mid calf, a wrap-around string at the ankles making them vaguely shoe-like.

Then it’s two pairs of white gloves on each hand. The coverall sleeves have button snaps and are taped to the inner pair of gloves. Scientists replace the outer ones fairly often throughout the day.

Finally, the helmet goes back on, and everything that will enter the clean room is attacked with alcohol-soaked pads. Fabrics aren’t friends of the clean room, so most of what goes in is plastic or metal—cameras and what must be the cleanest laptops in South Dakota seem the most common.

And then that’s it. Through the doors onto more blue sticky tape, and the scientists are finally ready for work. That might mean cleaning copper components, assembling detectors in a glove box, calibrating modules, testing cryostats, working on wiring or vacuum systems, or a hundred other things. It’s not the easiest outfit to work in. It’s a little warm, a little hard to breathe, a little like working through a fog. Most agree that the best part of the day is the sweet freedom when they remove their layers, ripping off the face mask and tape like a scientific Bioré pore strip.

Some—like Randy—aren’t real fans of the cumbersome procedures, while others don’t mind all that much. But everyone agrees that there is one cardinal rule to working in a clean room: Go to the bathroom before you head in.