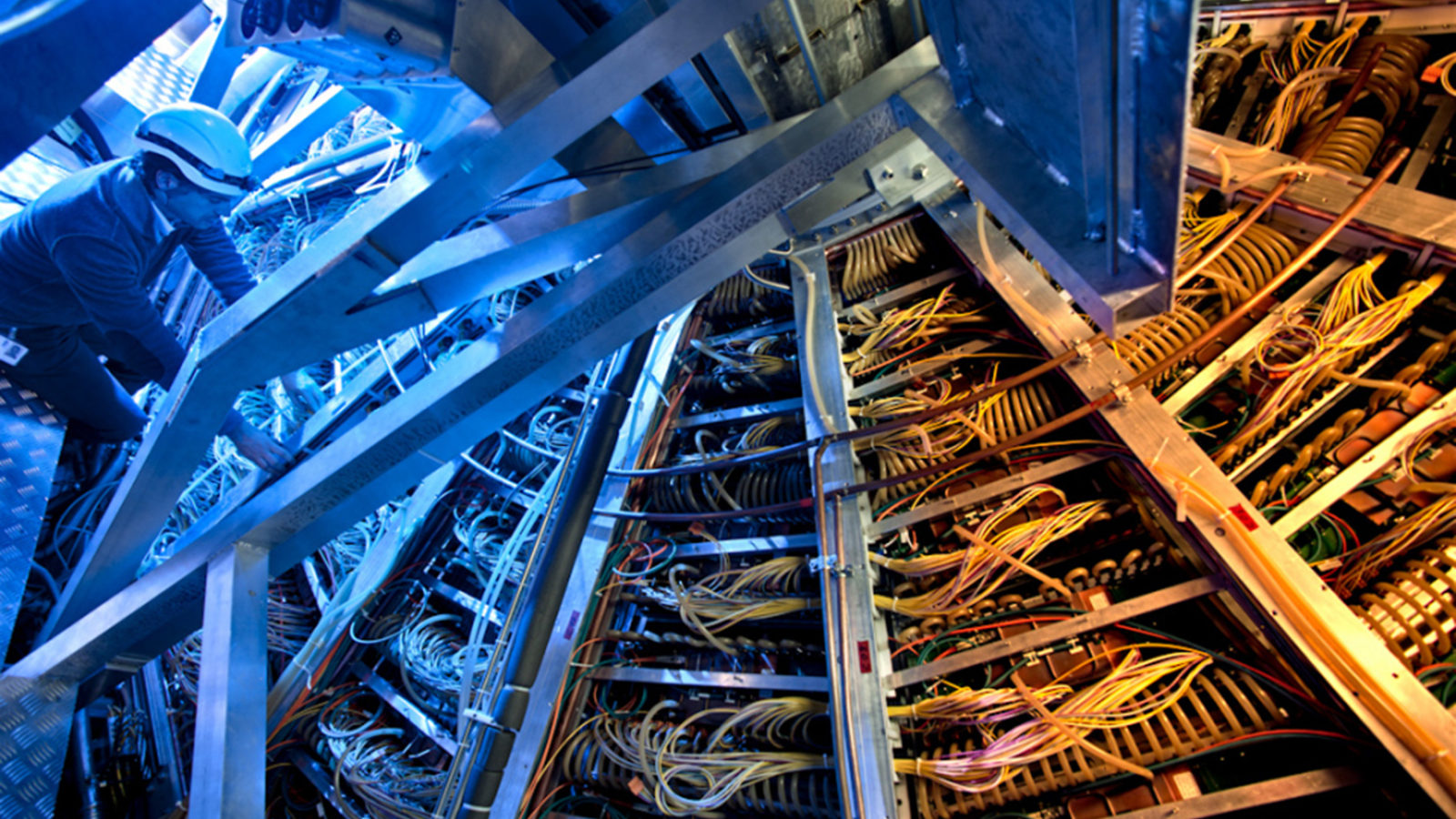 Watching ‘the clock’ at the LHC

As time ticks down to the restart of the Large Hadron Collider, scientists are making sure their detectors run like clockwork.

For the last two years, the Large Hadron Collider at CERN has been quietly slumbering while engineers and technicians prime it for the next run of data-taking in the summer of 2015.

But this has been anything but a break for researchers from the LHC experiments.

“Two years seems like a long time, but it goes by really fast,” says Michael Williams, a researcher on the LHCb experiment and assistant professor of physics at the Massachusetts Institute of Technology. “I think now it’s becoming a reality that running is coming soon, and it’s exciting.”

One of the biggest tasks the collaborations are confronting right now is calibrating all the individual components so that their timing is completely synchronized. This synchronization of the components—called “the clock”—allows physicists to reconstruct the flights of particles through the different parts of the detector to form a picture of the entire collision event.

“The clock is the foundation on which everything stands. It’s the heartbeat of the detector,” says UCLA physicist and CMS run coordinator Greg Rakness. “If the clock isn’t working, then the data makes no sense.”

“We have 18 different detectors that make up ALICE, and we have several different detection techniques,” says Federico Ronchetti, a scientist associated with CERN and Italian laboratory INFN who serves as the ALICE experiment 2015 run coordinator. "You have to combine the different pieces of information to produce an event. This is an integration, one of the most critical parts of the overall detector commissioning."

As Rakness says: “In the end, it’s one detector.”

In addition to being in time with themselves, the LHC detectors must be in time with the LHC. During this next run, high-energy bunches of protons accelerated inside the LHC will collide every 25 nanoseconds. If a detector’s timing is out of sync with the accelerator, scientists will have no way of accurately reconstructing the particle collisions.

If the detector were out of sync with the LHC, it would mistakenly show large chunks of energy suddenly going missing—just what physicists expect would happen if a rarely interacting particle, such as a dark matter particle, passed through the detector.

“What a better way to create a fake ‘new physics’ signal than if half the detector is out of sync?” Rakness says. “You’d have new physics all the time!”

Even though the task is daunting, the LHC researchers charged with commissioning the detectors are confident that they and their detectors will be ready for the accelerator's second run in early 2015.

“We understand our detector much better now,” says Kendall Reeves, a researcher for the University of Texas, Dallas, who works on the ATLAS experiment. “We have the experience from Run 1 to help out—and having that experience is invaluable. We are in a much better position now then we were at the beginning of Run 1.”

“Nothing is too complicated,” Rakness says. “In the end, this whole complicated chain breaks down to a step-by-step process. And then it ticks.”