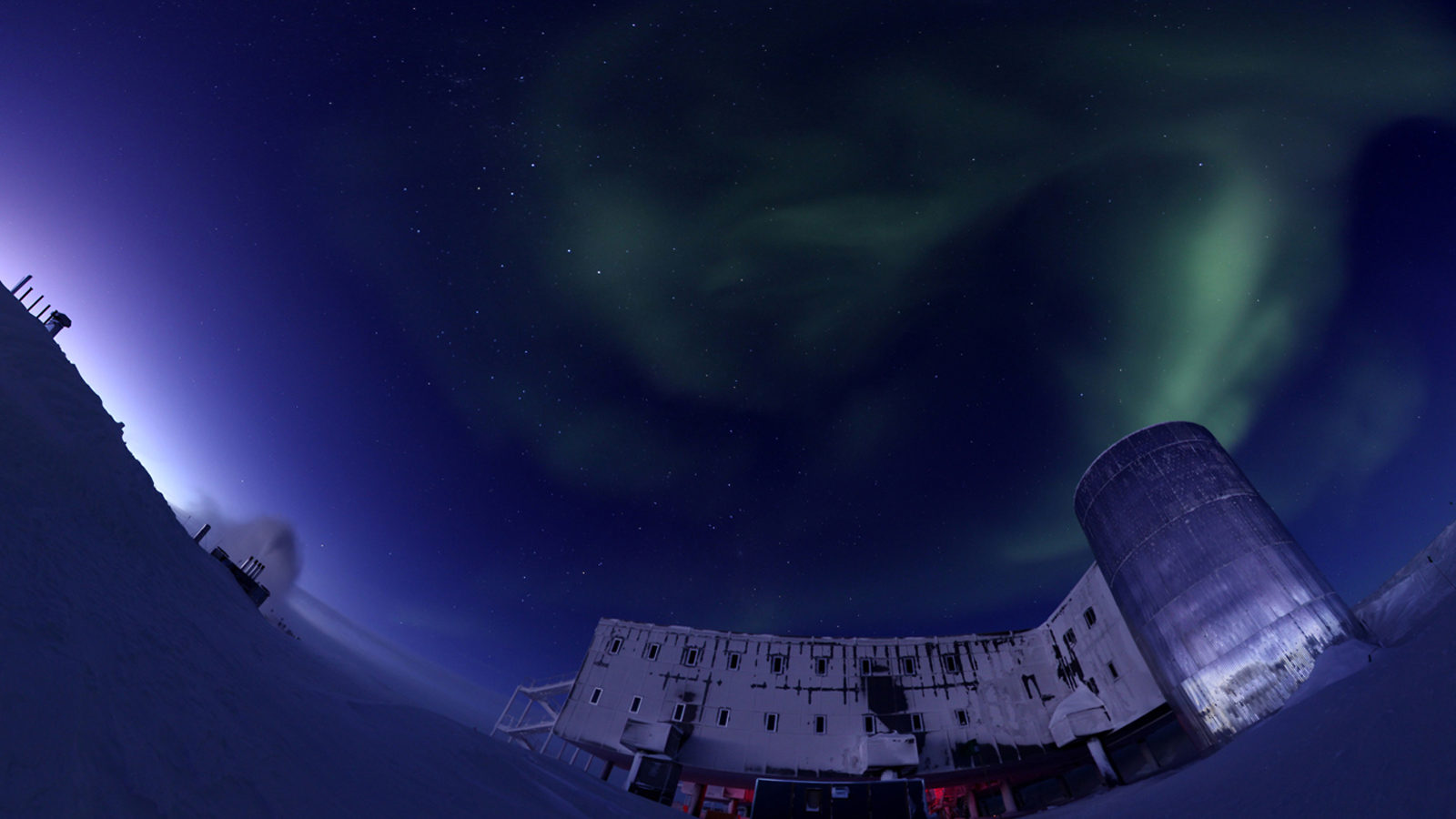 The sun sets but once a year at the South Pole, and it is a prolonged process. During a recent stay at the Amundsen-Scott South Pole Station, postdoctoral researcher Jason Gallicchio saw it hover along the horizon for about a week before dropping out of sight for six months. The station’s chefs prepared an eight-course meal to mark the occasion.

The South Pole is not the easiest place to mark the passage of time, but the spectacular view it offers of the night sky has made it one of the best places to study astrophysics—and a unique place to work.

Gallicchio, an associate fellow for the Kavli Insitute of Physics at the University of Chicago, is part of an astrophysics experiment at the South Pole Telescope. Last year he spent nearly a full year at the station, including a “winterover,” during which the crew for his experiment dwindled to just him and a colleague.

Life at the station

Making it to the South Pole took interviews and a rigorous training program that included emergency medical and firefighting training and a mandatory psychological evaluation, Gallicchio says.

“People were bombarding me with information—which grease to grease which parts with, how to analyze data in certain ways,” Gallicchio says. “It was totally intense every day. It was one of the best, most educational things in my life.”

Gallicchio landed at the South Pole in early January 2013 and remained there until mid-November.

“When you get off the plane at the South Pole, there is a feeling like you’re out in the ocean,” says University of Chicago physicist John Carlstrom, the principal investigator for the South Pole Telescope team, who has logged 15 round trips to the South Pole over the past two decades. “It’s just a featureless horizon. The snow is so dry it feels like Styrofoam.”

The living quarters at the South Pole station are comfortable and dorm-like, Gallicchio says. A brightly lit greenhouse provides an escape from the constant night and nosebleed-inducing dryness. It also supplies some greens to the daily menu, but no fresh fruit or nuts.

“One of the most popular things after dinner, ironically, is ice cream,” he says.

Gallicchio fashioned his sleeping schedule around his duties at the telescope. “I was always on-call,” he says. “A lot of people there were in that situation. It was totally acceptable to be eating or watching a movie and then to go off to work and come back.”

The living quarters are about a half-mile hike from the telescope building.

Because welding is challenging in the Antarctic chill, and because the long winter season limits construction time, the telescope was designed in pieces that could be quickly fastened together with thousands of structural bolts. The ski-equipped cargo planes that carry supplies to the South Pole station are limited to carrying 26,000 pounds per trip; the bolts practically required their own dedicated flight.

Much of the telescope’s instrumentation is tucked away in a heated building beneath the exposed dish. Its panels, machined to hair’s-width precision, are slightly warmed to keep them free of frost.

Earlier astrophysics experiments at the South Pole provided important lessons for how to best build, maintain and operate the South Pole Telescope, Carlstrom says. “Everything left out and exposed to the cold will fail in a way you probably hadn’t thought of.”

Measuring 10 meters across and weighing 280 tons, the South Pole Telescope precisely maps temperature variations in the cosmic microwave background, a kind of faint static left in the sky from the moment that light first escaped the chaos that followed the big bang.

The telescope was installed in 2007 and upgraded in 2012 to be sensitive to a type of pattern, called polarization, in the CMB. Studying the polarization of the CMB could tell scientists about the early universe.

Another South Pole experiment, BICEP2, recently reported finding a pattern that could be the first proof that our universe underwent a period of rapid expansion the likes of which we haven’t seen since just after the big bang. One of the goals of the South Pole Telescope is to further investigate and refine this result.

During the winter months, the average temperature is negative 72 degrees, but “a lot of people find the altitude much worse than the cold,” Gallicchio says. No flights are scheduled in or out.

Gallicchio says he had never experienced such isolation. Even if you’re aboard the International Space Station, if something goes wrong you’re only a few hours away from civilization, he says. During a winter at the South Pole, there’s no quick return trip.

During the warmer months, up to about 200 scientists and support staff can occupy the South Pole station at any given time. During the winter, the group is cut to about 50.

During Gallacchio’s winterover, he was generally responsible for the telescope’s data acquisition and software systems, though he occasionally assisted with “crawling around fixing things.” Gallacchio could work on some of the telescope’s computer and electronics systems from the main station, while his more seasoned colleague Dana Hrubes often spent at least eight hours a day at the telescope. “He really taught me a lot and was a great partner,” Gallachio says.

At one point, the power went out, and his emergency training kicked in. Gallicchio and Hrubes began the steps needed to dock the telescope to protect it from the elements in case its heating elements ran out of backup power.

“Power going out is a big deal, as all of the heat from the station comes from waste heat in the generators, and eventually there’s going to be no heat,” he says. “The circuit-breaker kept tripping and it took [the staff] a while to figure out that a control cable had frayed and shorted itself. It got a little scary.”

Once the power plant mechanics found the problem, they repaired it and got all systems back online. “They did a great job.”

Gallicchio recalls the appearance of the first star after the weeklong sunset. Gradually, more and more stars appeared. Eventually, the sky was aglow.

On some nights, the southern lights, the aurora australis, took over. “When the auroras are active they are by far the brightest thing,” he says. “Everything has a green tint to it, including the snow and the buildings.”

Besides missing family, friends, bike rides and working in coffee shops, Gallicchio says he did enjoy his time at the South Pole. “Nothing about the experience itself would keep me from doing it again.”