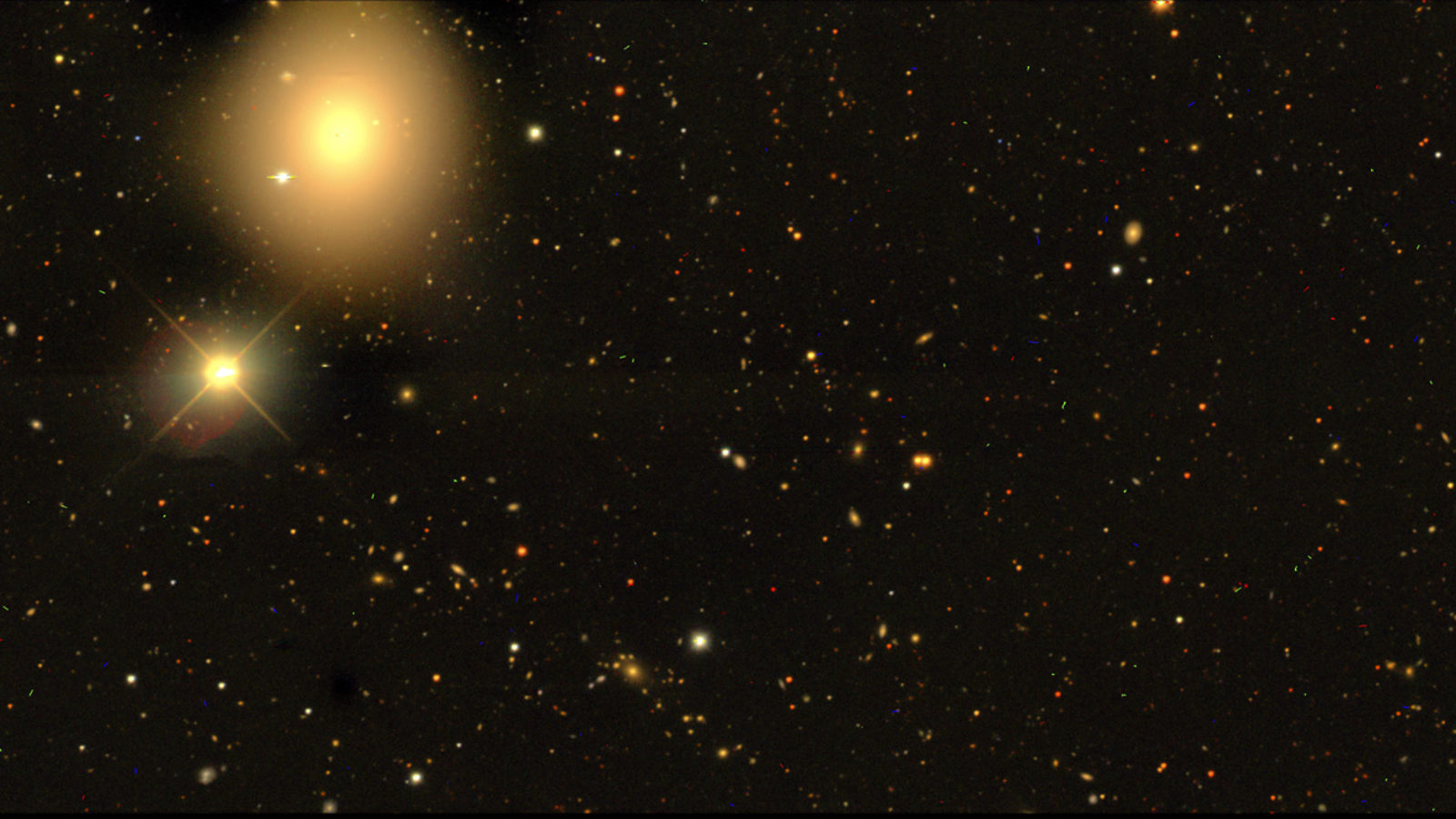 Space: the final frontier. These are the voyages of the Dark Energy Survey. Its five-year mission: to map a portion of the southern sky in unprecedented detail. To use the world’s most powerful digital camera to probe the mystery of dark energy. To boldly photograph where no astrophysicist has photographed before.

The Dark Energy Survey officially began on Saturday, Aug. 31. Using the Dark Energy Camera, a 570-megapixel imaging device built at Fermilab, scientists plan to take clear, dazzling pictures of the largest number of galaxies ever studied in such a survey. The camera is mounted on a telescope at the Cerro Tololo Inter-American Observatory in Chile, which offers a mountaintop vista perfect for obtaining crystal-clear, high-resolution images.

“With the start of the survey, the work of more than 200 collaborators is coming to fruition,” says Fermilab physicist Josh Frieman, director of the Dark Energy Survey, in a press release. “It’s an exciting time in cosmology, when we can use observations of the distant universe to tell us about the fundamental nature of matter, energy, space and time.”

Over five years, scientists will capture full-color photographs of 300 million galaxies, 100,000 galaxy clusters and 4000 new supernovae. The camera is powerful enough to see light from more than 8 billion light years away. The Dark Energy Camera’s 62 charge coupled devices will provide a previously unheard-of level of sensitivity to red light. This will help determine the distances to galaxies—those that appear red are generally farther away, while those that appear blue are nearer by.

But the survey is not just about collecting pretty pictures. Scientists are searching for the answer to a fascinating mystery: Why is the expansion of the universe accelerating? The Dark Energy Survey will use four methods to probe dark energy, the phenomenon believed to be pushing the universe apart:

1. Counting galaxy clusters. While gravity pulls mass together to form galaxies and clusters of galaxies, dark energy pushes it apart. The Dark Energy Camera will see light from galaxy clusters billions of light years away, and counting those clusters at different points in time will offer insight into the cosmic competition between gravity and dark energy.

2. Measuring supernovae. A supernova is a star that explodes, becoming as bright as an entire galaxy of billions of stars. By measuring how bright it appears on Earth, scientists can tell how far away a supernova is and then use that information to determine how fast the universe has been expanding since the star’s explosion.

3. Studying the bending of light. When light from distant galaxies encounters dark matter in space, it bends around it, causing those galaxies to appear distorted in telescope images. The survey will measure the shapes of 200 million galaxies, exploring how gravity and dark energy mold the lumps of dark matter throughout space.

4. Using sound waves to map the universe’s expansion. Sound waves created hundreds of thousands of years after the big bang left an imprint on the way galaxies are distributed across the universe. The survey will measure the positions in space of 300 million galaxies to find this imprint and use it to infer the history of cosmic expansion.

The Dark Energy Camera achieved first light in September of last year. During the subsequent commissioning phase, the camera was put through its paces. Along the way, it captured dozens of sharp, clear images. You can see some of them at the survey’s official photo blog, Dark Energy Detectives, and even more in an interactive mosaic of 62 DECam images.

With the survey now officially underway, scientists will collect data between September and February each year through 2018. This “season” was chosen because the portion of the sky scientists wish to observe will be overhead during those months, and the weather in Chile will be the most cooperative.