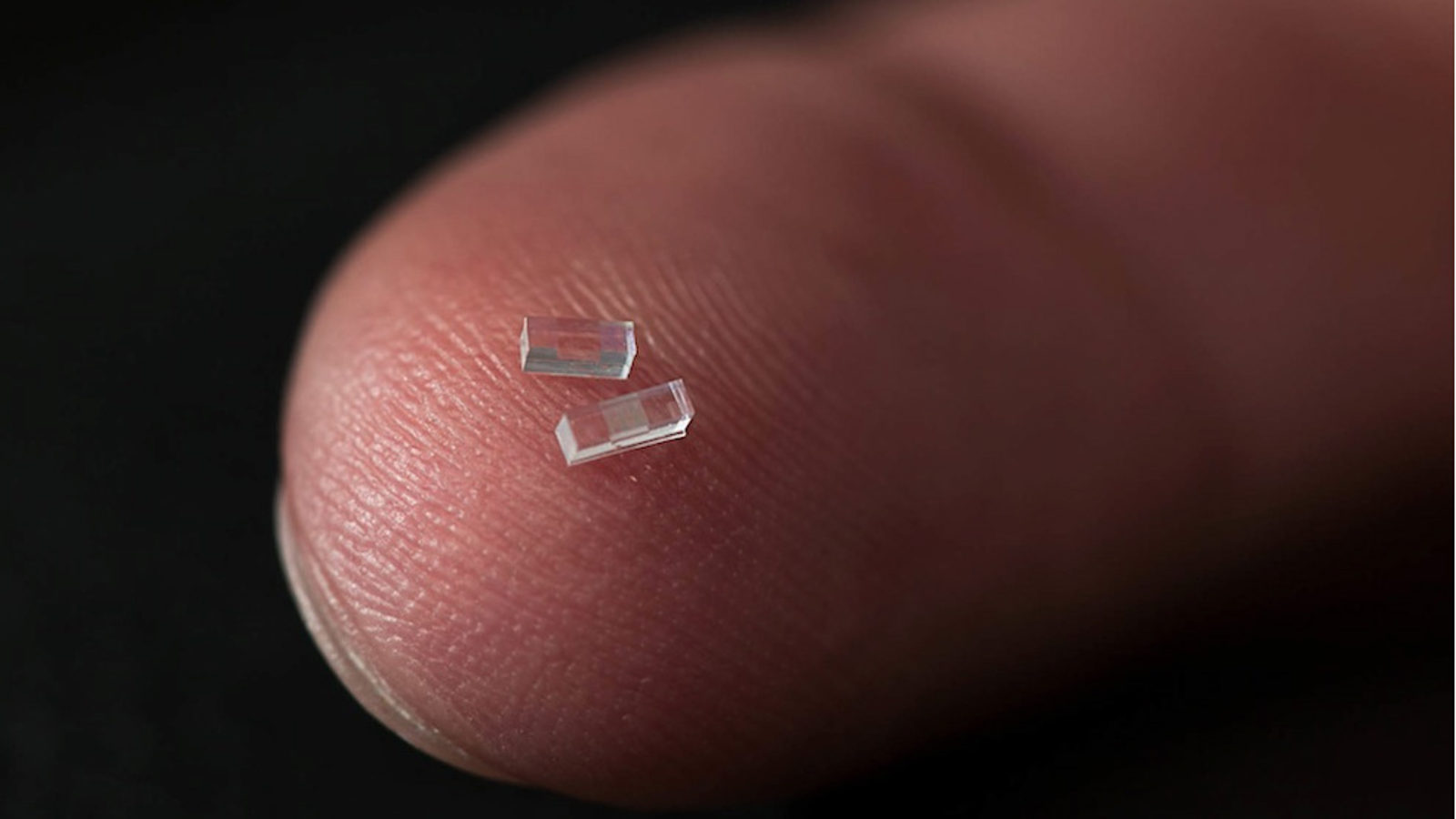 In an advance that could dramatically shrink particle accelerators for science and medicine, researchers have used a laser to accelerate electrons at a rate 10 times higher than conventional technology in a nanostructured glass chip smaller than a grain of rice.

The achievement was reported in Nature by a team including scientists from SLAC National Accelerator Laboratory and Stanford University.

“We still have a number of challenges before this technology becomes practical for real-world use, but eventually it would substantially reduce the size and cost of future high-energy particle colliders for exploring the world of fundamental particles and forces,” says Joel England, the SLAC physicist who led the experiments. “It could also help enable compact accelerators and X-ray devices for security scanning, medical therapy and imaging, and research in biology and materials science.”

Because it employs commercial lasers and low-cost, mass-production techniques, the researchers believe it will set the stage for new generations of “tabletop” accelerators.

At its full potential, the new “accelerator on a chip” could match the accelerating power of SLAC’s 2-mile-long linear accelerator in just 100 feet, and deliver a million more electron pulses per second.

This initial demonstration achieved an acceleration gradient, or amount of energy gained per length, of 300 million electronvolts per meter. That's roughly 10 times the acceleration provided by the current SLAC linear accelerator.

“Our ultimate goal for this structure is 1 billion electronvolts per meter, and we’re already one-third of the way in our first experiment,” says Stanford Professor Robert Byer, the principal investigator for this research.

Today’s accelerators use microwaves to boost the energy of electrons. Researchers have been looking for more economical alternatives, and this new technique, which uses ultrafast lasers to drive the accelerator, is a leading candidate.

Particles are generally accelerated in two stages. First they are boosted to nearly the speed of light. From then on, any additional acceleration increases their energy, but not their speed; this is the challenging part.

In the accelerator-on-a-chip experiments, electrons are first accelerated to near light-speed in a conventional accelerator. Then they are focused into a tiny, half-micron-high channel within a fused silica glass chip just half a millimeter long. The channel is patterned with precisely spaced nanoscale ridges. Infrared laser light shining on the pattern generates electrical fields that interact with the electrons in the channel to boost their energy.

Turning the accelerator on a chip into a full-fledged tabletop accelerator will require a more compact way to get the electrons up to speed before they enter the device.

A collaborating research group in Germany, led by Peter Hommelhoff at Friedrich Alexander University and the Max Planck Institute of Quantum Optics, has been looking for such a solution. It simultaneously reports in Physical Review Letters its success in using a laser to accelerate lower-energy electrons.

Another possible application is small, portable X-ray sources to improve medical care for people injured in combat, as well as provide more affordable medical imaging for hospitals and laboratories. That’s one of the goals of the Defense Advanced Research Projects Agency’s Advanced X-Ray Integrated Sources program, which partially funded this research. Primary funding for this research is from the DOE’s Office of Science.

Accelerator on a Chip: How It Works

Editor's note: A version of this article was originally published as a press release by SLAC National Accelerator Laboratory.
Follow
Use your browser’s print dialog box to create a pdf.
Latest news articles
Fermilab

A new facility opens for experiments in SLAC’s historic End Station A, where the first evidence for quarks was discovered.