On a hot June Illinois afternoon, a celebratory atmosphere prevails at Kuhn Barn, a holdover from Fermi National Accelerator Laboratory’s agricultural past and also a popular cookout spot.

The gathering is more than a simple celebration of the start of summer; it marks a tipping point. The Dark Energy Camera, the first device specifically designed to search for dark energy, is on the brink of completion. Project manager Brenna Flaugher—who organized the cookout—and her colleagues are about to see the project they’ve been preparing for the past eight years transition from dream to reality.

This fall, scientists will fire up DECam, as it’s affectionately known, on a mountaintop in Chile and see their hard work pay off.

“It’s going to be very exciting for all of us to open the shutter for the first time,” Flaugher says. “Who knows what we’ll see?”

What they hope to see are signs of the invisible, mysterious force that seems to pull the universe apart—a force that has never been directly observed. 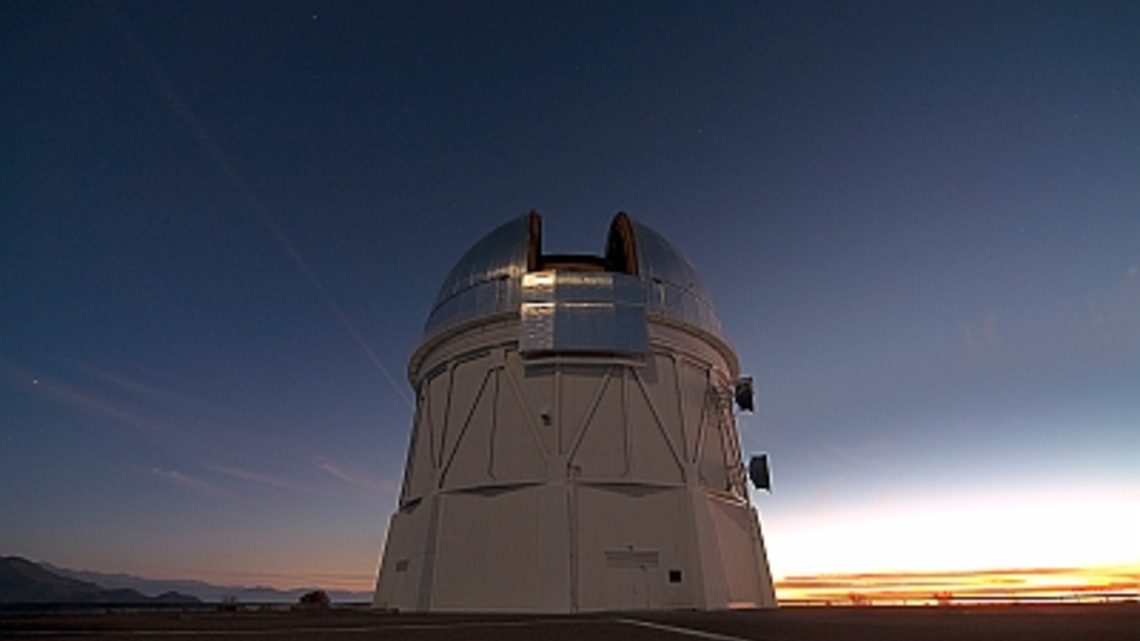 The Blanco telescope in Chile is now home to DECam. 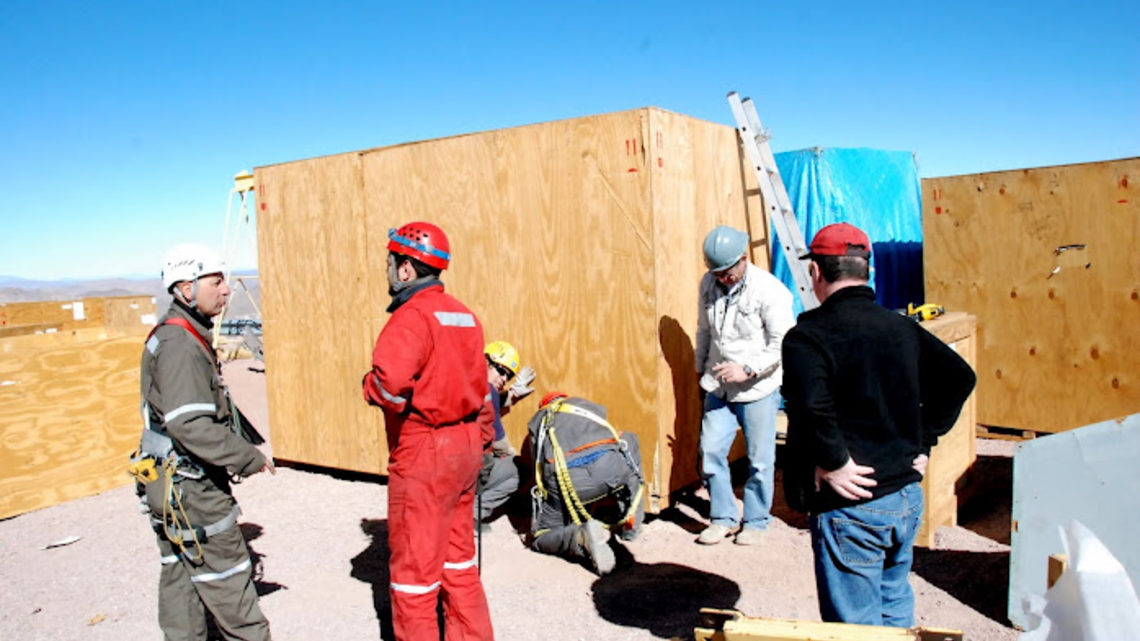 Fermilab physicist Tom Diehl examines the crate containing pieces of the Dark Energy Camera at the Blanco Telescope atop Cerro Tololo in the Chilean Andes. 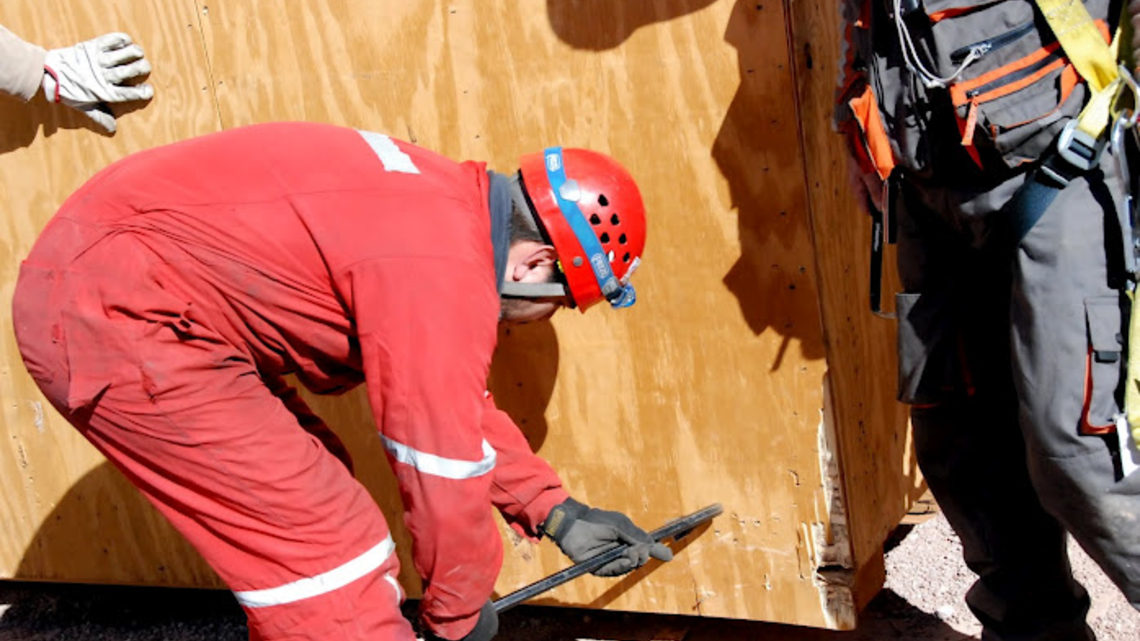 The crate containing pieces of the Dark Energy Camera imager arrived in November 2011. 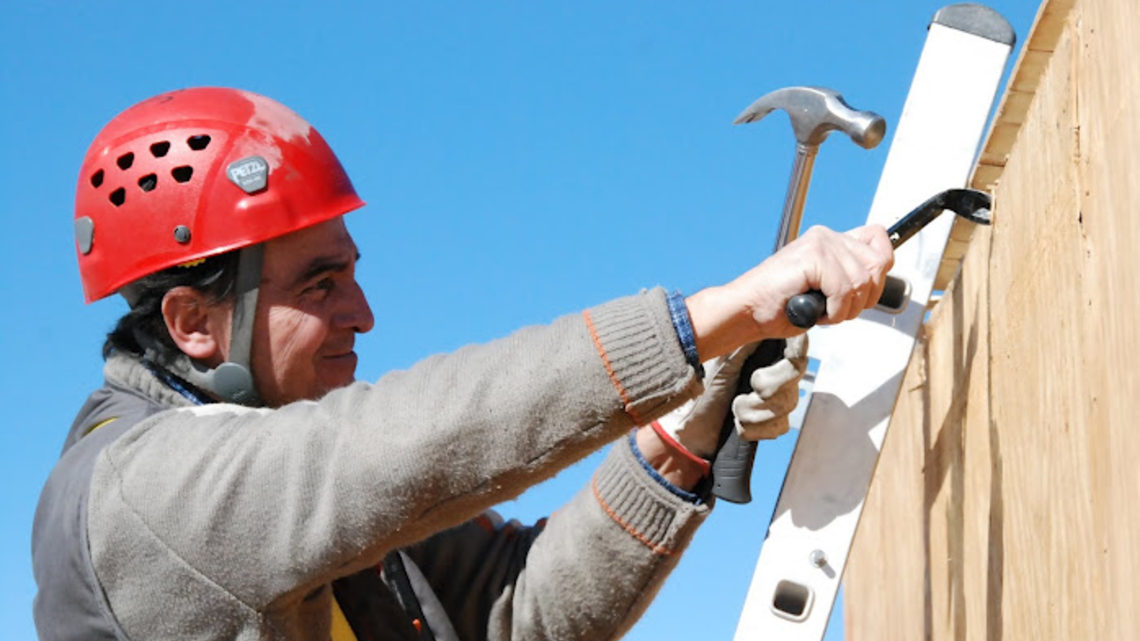 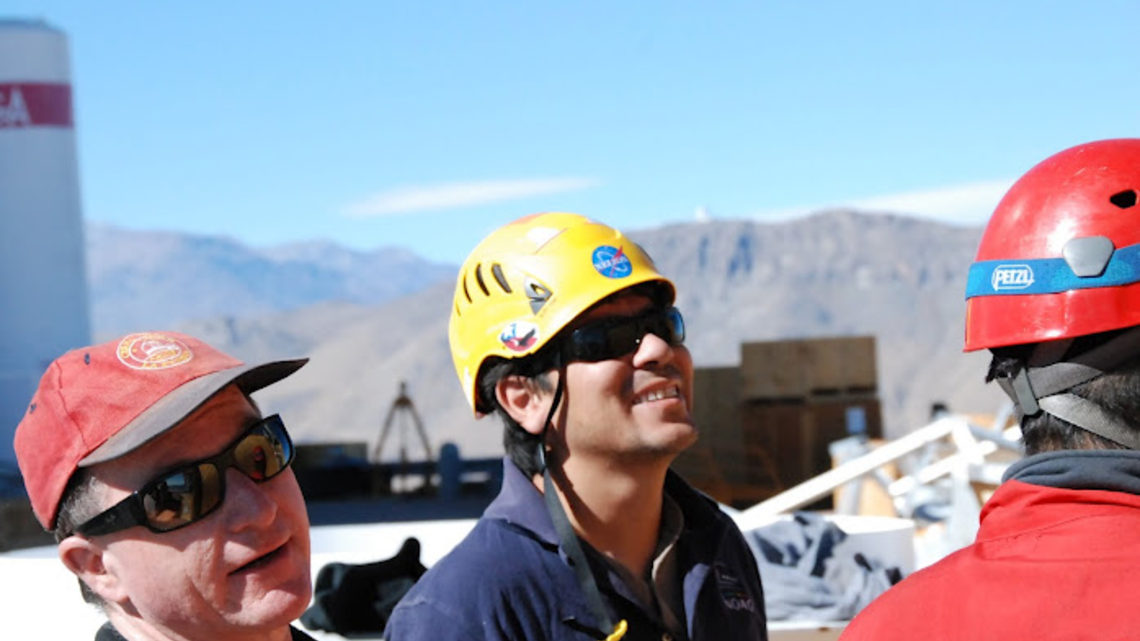 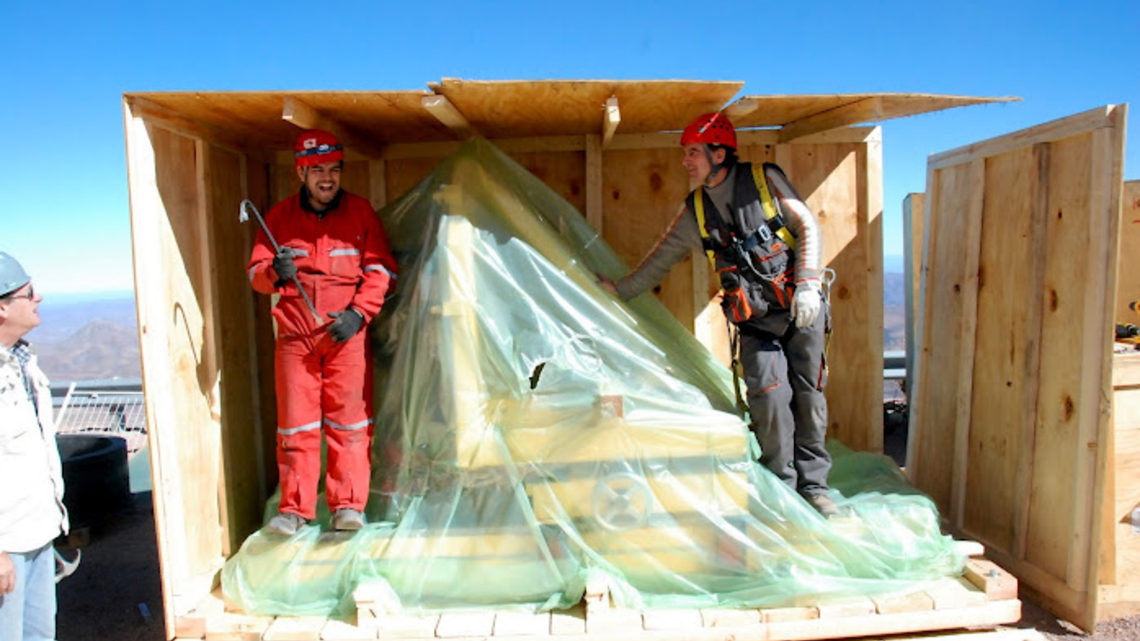 A support structure for the Dark Energy Camera sits shrouded in plastic while workers disassemble its crate. 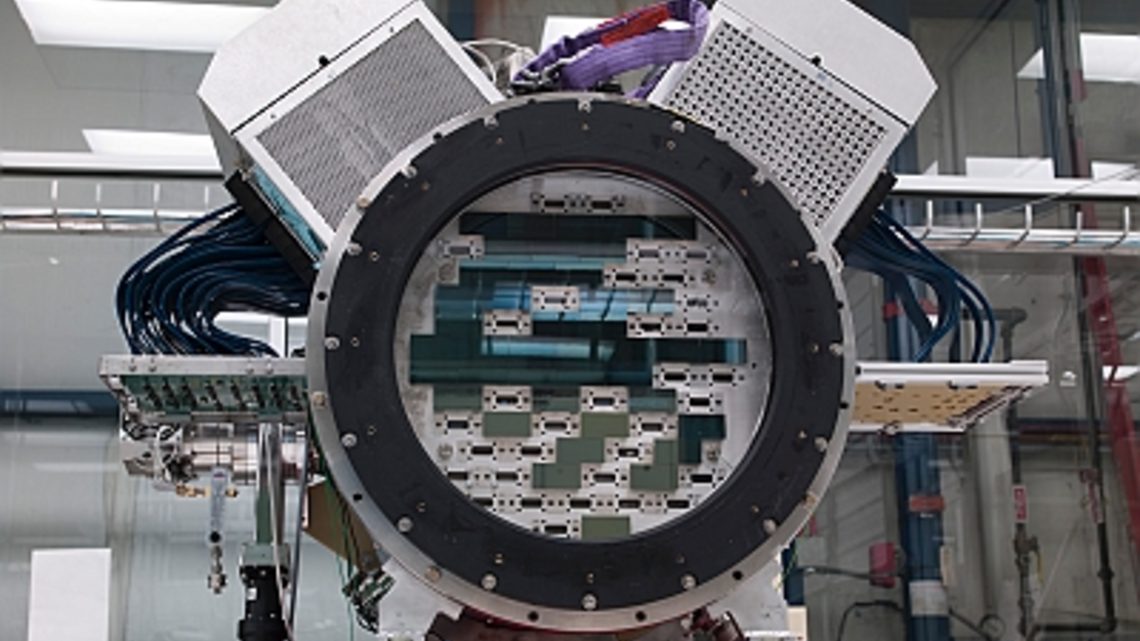 Technicians at Fermilab assembled the Dark Energy Camera in a cleanroom. Collaborators from around the United States and the world helped develop its numerous subsystems. 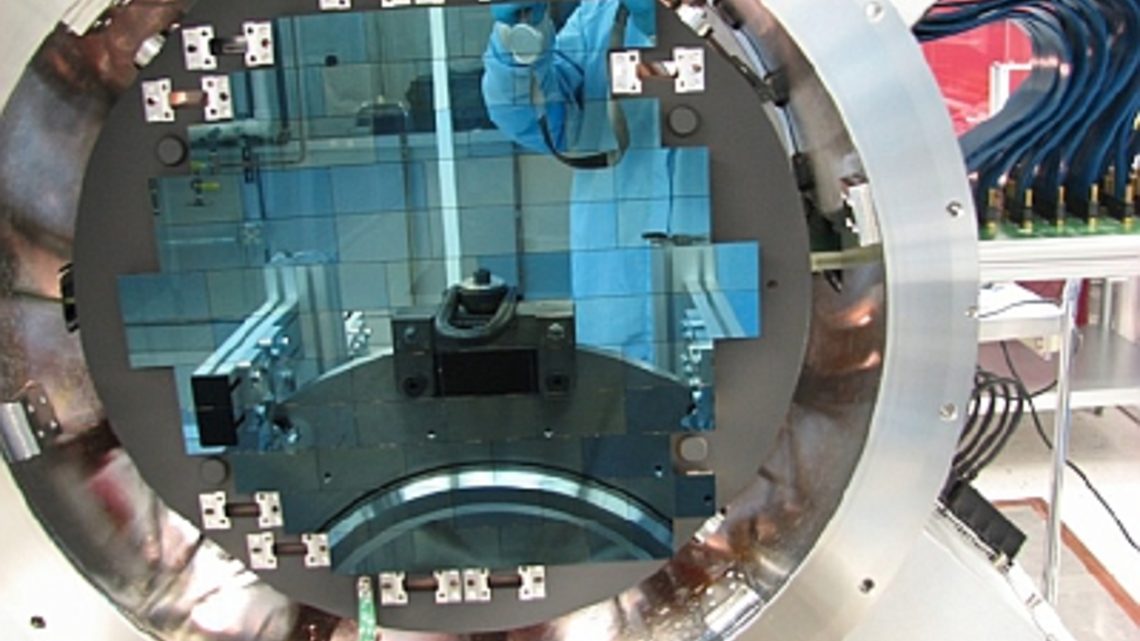 The CCD array of the Dark Energy Camera has a resolution of 570 megapixels—a hundred times that of the average consumer digital camera. 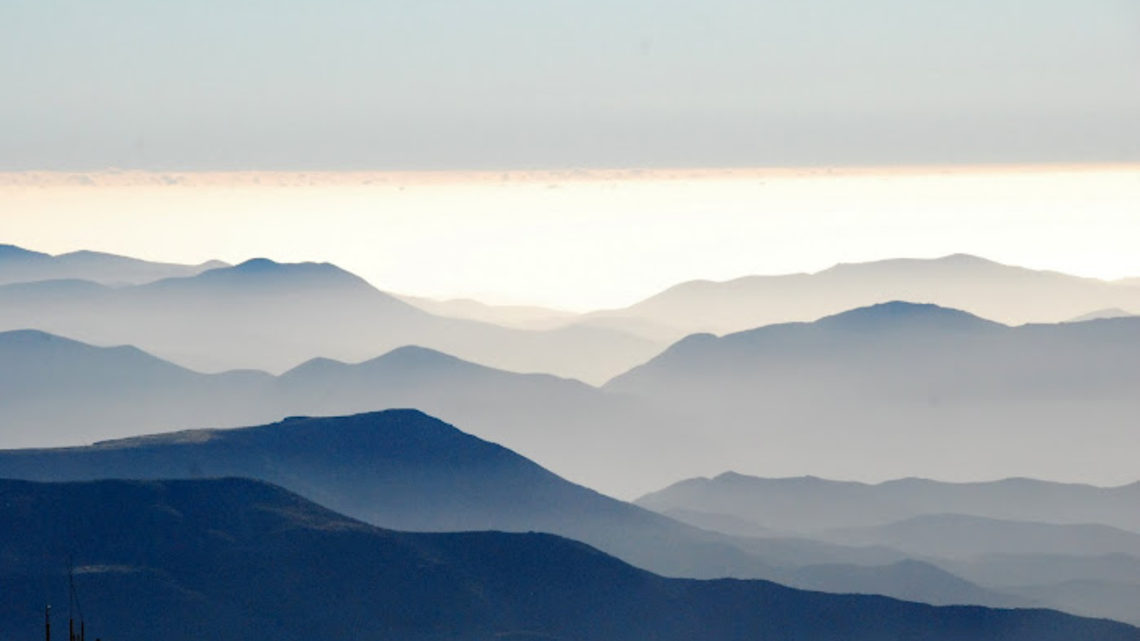 The dry, cool air at the summit of Cerro Tololo allows for exceptional night sky views. 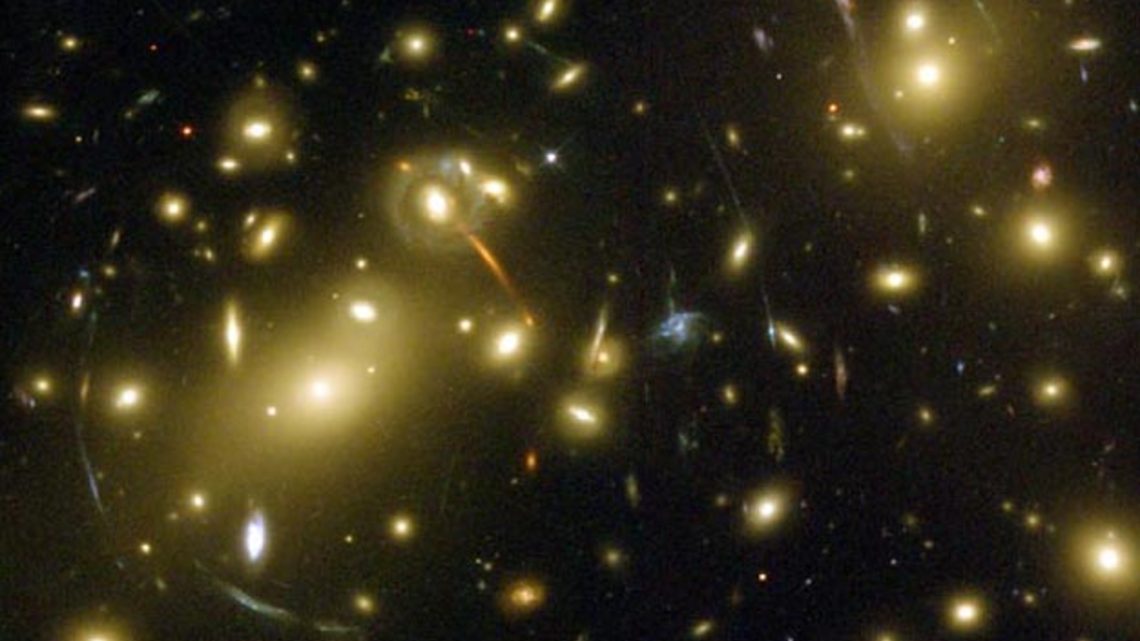 The Dark Energy Survey will look for the signs of dark energy in four different ways. One method involves examining gravitational lensing, or the warping of light from background objects around massive objects in the foreground.

The mystery of dark energy

Physicists have known about cosmic expansion since the 1920s, when Edwin Hubble found that the light spectrum of distant objects was shifted to higher wavelengths in a phenomenon called redshift. But dark energy has been on their minds only since 1998, when two independent studies of type 1a supernovae revealed the bright, exploding stars to be fainter than expected, hinting that the expansion of the universe is speeding up. Scientists previously thought that, under Einstein’s Theory of General Relativity, the expansion of the universe would slow as time went on due to the pull of gravity. The 1998 finding suggested otherwise.

It seems that about 5 billion years ago, the universe started expanding at an accelerating pace. Before that, gravity had been the dominant force in the universe, but then something else took over, relentlessly pushing parts of the cosmos away from one another. Theorists postulate that if we really understand how gravity works, then some unforeseen, invisible force—a dark energy—must be responsible.

“The universe was matter-dominated when it was slowing down,” Flaugher says. “And then this slowing down stopped—and now we’re in a dark-energy dominated universe because the expansion is winning over the gravitational pull of everything.”

Four different views of the universe

After first light in September, DECam will enable the most comprehensive search for dark energy yet. As currently understood, dark energy is pushing galaxies and other large objects in the cosmos away from each other. Exactly how it does that or where it came from is unknown. The Dark Energy Survey collaboration, which built DECam and will use it to carry out a new survey of the universe, is hoping their instrument will provide some answers.

Using DECam, the Dark Energy Survey will measure the history of the expansion of the universe as well as the development of large-scale cosmic structures over time. To accomplish these goals, the survey will look to the skies for four pieces of evidence. First are type 1a supernovae, the phenomena that first tipped scientists off to the presence of dark energy. DES will identify 4000 supernovae whose brightnesses will indicate how fast the universe was expanding at different times in the past. Another piece of evidence, a count of tens of thousands of galaxy clusters, will provide data on the rate at which these large groupings of galaxies formed. As dark energy came to dominate the universe, it is thought to have shut off the formation of such massive structures. Weak gravitational lensing, the warping of light from 200 million distant galaxies due to the gravity of astronomical objects in the foreground, gives another indicator of how structures formed and evolved over time. Finally, baryon acoustic oscillations, large-scale ripples in the proton and neutron sea of the early universe, provide information about the rate of expansion of the universe. Each of these pieces of evidence can help elucidate changes in that rate and in the clustering of matter in the universe.

“The combination of these four different ways to probe dark energy really became the hallmark of the project,” says Josh Frieman, the director of the Dark Energy Survey.

To make these observations, DECam is by necessity a complex device. The Fermilab team is part of a 26-institution consortium, each member of which contributed to one or more of the 21 subsystems of DECam. This September, these subsystems will come together at the Victor M. Blanco Telescope perched atop Cerro Tololo mountain in Chile. The 1970s-era Blanco is a rarity with its 4-meter mirror that allows it to view wide swaths of the sky. When DECam is attached, it will distinguish the Blanco as the world’s most advanced dark energy probe and will usher in a new era of astrophysics.

The device’s subsystems will work in concert to take detailed images of the southern sky. First, a set of finely crafted lenses will take in the light from the night sky. The barrel containing the lenses can be moved and adjusted with a series of six mechanical arms, called the hexapod. Below that, a filter will transmit only light that falls within a certain range of wavelengths to the imager, a system of 74 charge-coupled devices that will record each image on an array of 570 megapixels. Finally, several computer systems will record the data and allow researchers to access it via the Web while also serving as a remote control and an automated focuser.

Every subsystem of the camera was rigorously tested before assembly at Fermilab last year and again once the device was completed. “Each part has been thoroughly tested and characterized based on analysis and design details,” Flaugher says. Dealing with what might just be the world’s most complicated digital camera, the DES team is leaving nothing to chance. As the installation process progresses, scientists and technicians have tackled a multifarious collection of tasks from coding programs to attaching cooling lines and power and data cables to the telescope’s white steel trusses.

To successfully catapult the Blanco into the 21st century, Dark Energy Survey scientists need to make sure that their camera works just as designed. Everything inside the camera needs to go right, says Fermilab physicist Tom Diehl. “I want to know that when we get the imager on the telescope, we actually see a nice focused image,” he says.

Getting that nice focused image requires more than just the physical imager; it requires the right software, too. Physicist Aaron Roodman of SLAC National Accelerator Laboratory in California has been developing the computer programs that will ensure DECam’s images will be clear. Roodman’s program will analyze images coming into the camera and automatically provide operators instructions for moving the hexapod, keeping pace with temperature and atmospheric changes and keeping the images sharp.

“Time is precious,” Roodman says. “The nice thing about this system is that it will focus automatically every minute by looking at the out-of-focus stars—the ones that look like a big disc or a donut.” Eventually, the system will automatically focus the stars until they are sharp points of light.

Peering into the future

Once DECam’s hardware and software are finished and installed, the survey will operate for a total of 525 nights between the months of September and February over five to six years. In that time, the members of the DES collaboration hope to create a better picture of what dark energy is and how it is affecting the cosmos.

Back at Kuhn Barn, Flaugher and her team are already thinking about the step after that. One proposed idea is the Dark Energy Spectrometer, or DESpec. DECam will identify about 10 million of the best galaxies for gathering more data. DESpec—which would be attached to the end of the cage that houses DECam—would channel light from those galaxies through 4000 optical fibers to a set of spectrographs that would provide more precise redshift data. In the near term, DESpec could target galaxies from DES and, in the next decade, from the Large Synoptic Survey Telescope, which is due to be constructed on another Chilean mountaintop, Cerro Pachón, 10 miles away from Cerro Tololo.

All who are at the Kuhn Barn cookout know there’s much riding on their work, but they have meticulously prepared for this moment. As the fireflies begin to emerge with the setting sun, the DECam team looks forward to the next five years exploring one of the frontiers of physics.