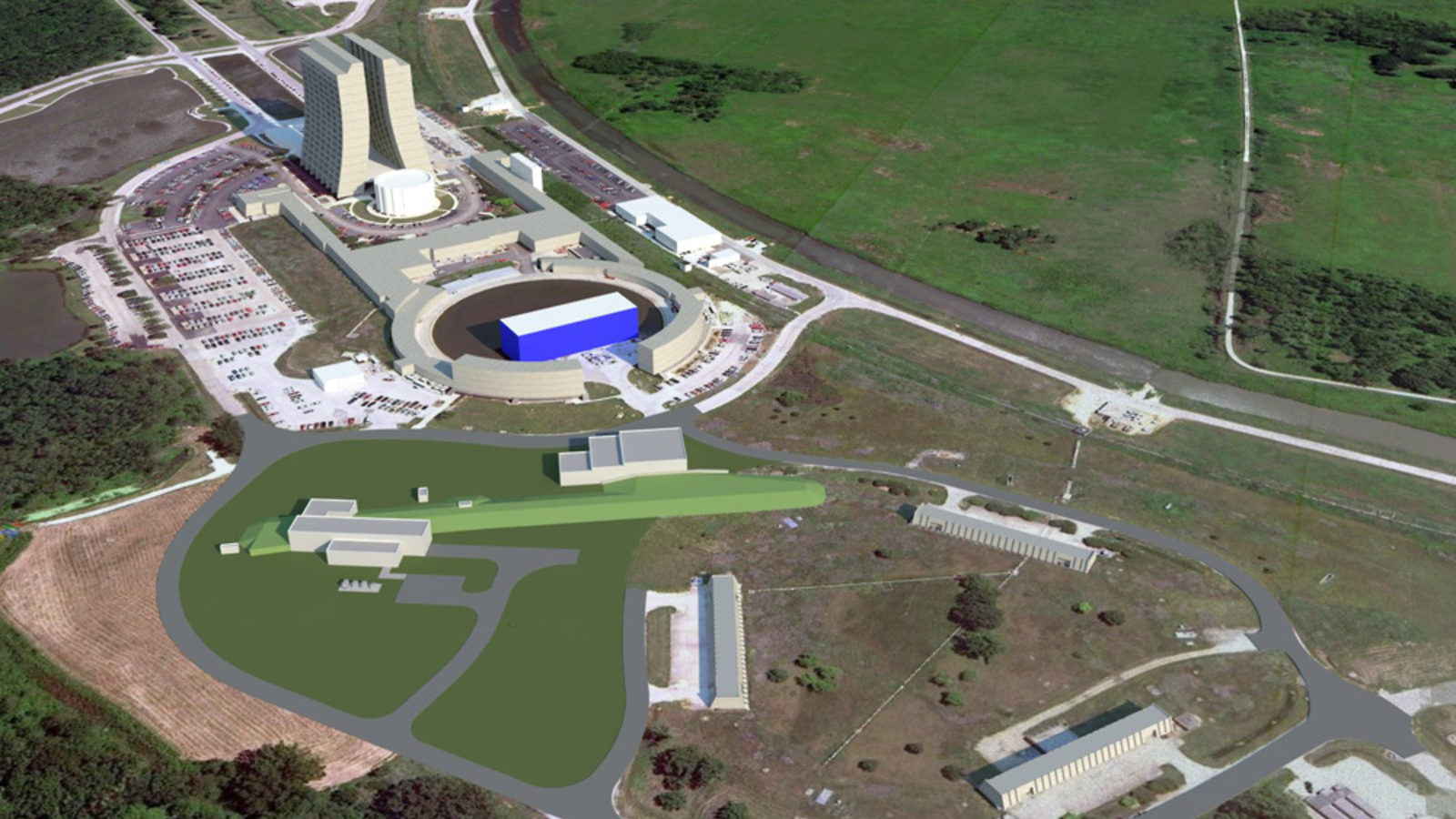 Fermilab’s plans for creating a Muon Campus with top-notch Intensity Frontier experiments have received a big boost. The Department of Energy has granted Mission Need approval to the Muon g-2 project, one of two experiments proposed for the new Muon Campus (shown in rendering above). The other proposed experiment, Mu2e, is a step ahead and already received the next level of DOE approval, known as Critical Decision 1.

“We now are officially on DOE’s roadmap,” said Lee Roberts, professor at Boston University and co-spokesperson for the roughly 100 scientists collaborating on the Muon g-2 (pronounced g minus two) experiment. “This should make it easier to increase the size of our collaboration and foster international participation. Potential collaborators supported by the National Science Foundation or foreign funding agencies will be happy to see that we now have DOE’s official Mission Need approval.”

“The design of the buildings has progressed a lot,” said Chris Polly, project manager for the Muon g-2 experiment. “We hope to break ground for the Muon Campus by the end of the calendar year.”

The Muon g-2 experiment will be more sensitive to virtual or hidden particles and forces than any previous experiment of its kind. It will measure with high precision a quantity known as the muon magnetic moment. A previous measurement, made with an experiment at Brookhaven National Laboratory, yielded a surprise when it produced a result seemingly inconsistent with the magnetic moment predicted by theory. If confirmed, the discovery would open a window on subatomic interactions that go beyond the particles and forces described by the Standard Model.

Since the publication of the final Brookhaven results in 2004, scientists have worked diligently to refine theoretical predictions and devise an experiment that will yield a more precise measurement. Experimenters turned to Fermilab, which is the only laboratory in the world that currently has the capability to make high-intensity muon beams that meet the experiment’s requirements.

The Muon g-2 plans include the transportation of a 50-foot-diameter ring with a set of one-of-a-kind superconducting magnets from Brookhaven to Fermilab. The circular ring would be transported by a special truck and barge to Illinois and then by truck to Fermilab. Project managers are beginning to work with transportation specialists and local authorities on the details of this endeavor. The truck would move at about 5 mph at night, with escort from police and transportation experts.

To prepare for the Muon g-2 experiment, a group of scientists led by Mary Convery of Fermilab’s Muon Department already tested the production and capture of muons with Fermilab’s former Antiproton Source earlier this year. They slammed protons from the Main Injector into a target to create sprays of secondary particles, including muons.

“The team succeeded in capturing and circulating muons in the Debuncher at the energy of 3.1 GeV,” Convery said. “We were able to gain valuable experience with these muon beam studies before the accelerator complex was shut down in April to make upgrades to the accelerators for NOvA.”

Another group of scientists is advancing plans for the state-of-the-art particle detectors that are necessary to measure the muon magnetic moment. In June, DOE recognized Fermilab’s Brendan Casey with an award to support parts of those R&D efforts.

“The Muon g-2 detector group is well established,” said Muon g-2 co-spokesperson Dave Hertzog, of the University of Washington. “There are lots of interesting aspects that students can work on. This is a really exciting time for the collaboration.”

The second proposed muon experiment, Mu2e, received CD-1 approval last month.  It will explore another property of muons predicted by theory, the transformation of muons into electrons.

This article appeared in Fermilab Today on Wednesday, Sept. 19.

Voyage into the unknown

In the deep, dark quantum sea known as the Intensity Frontier, particle physicists expect to find everything from exotic new particles to new insights into the evolution of our universe.