Fermilab radiation safety physicist William S. Higgins explains how the concept of antimatter first made its way into science fiction. 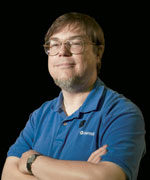 Like everyone in his profession, John W. Campbell, Jr., editor of Astounding Science Fiction magazine, kept a watchful eye on new developments in nuclear physics, astronomy, and other sciences. Any scientific news might provide an idea for a science fiction story. Campbell kept in touch with dozens of authors, continually suggesting situations, backgrounds, and gimmicks. As an example, stories about uranium power started appearing in the pages of Astounding shortly after scientists discovered fission.

One consequence of Albert Einstein’s theory of relativity is that energy and matter are equivalent. The most vivid example of this is antimatter, which annihilates on contact with ordinary matter, releasing a shower of energetic radiation.

Paul Dirac first proposed in 1928 that the ordinary electron, negatively charged, might have a corresponding twin particle of positive charge. By 1932, Carl Anderson had observed such particles, dubbed “positrons,” in cosmic rays. Physicists began to believe that other elementary particles, such as the proton, could also have antiparticles.

Dirac concluded his 1933 Nobel Prize lecture by saying: The Earth (and presumably the whole solar system) contains a preponderance of negative electrons and positive protons. It is quite possible that for some of the stars it is the other way about, these stars being built up mainly of positrons and negative protons.

Among physicists exploring this possibility was Vladimir Rojansky. In 1935, he coined a new term for the hypothetical mirror image of ordinary, or “terrene,” matter: “contraterrene matter.” He noted that “the explosive transformation of matter into radiation in a collision of a terrene and contraterrene body” was possible.

In 1940, Rojansky speculated that some objects in our solar system might consist of contraterrene matter. Certainly, some do not; fallen meteorites contain the same elements as terrestrial materials. If, however, a contraterrene object were orbiting the sun or passing through the solar system, it would be steadily bombarded by ordinary dust and gas. The resulting annihilation would gradually heat and erode its surface, causing volatile materials to escape and surrounding the object with a cloud of debris. In other words, it would look very much like a comet. Were some comets contraterrene?

In February 1941, Lincoln LaPaz, a meteor specialist, suggested that Rojansky’s notion might explain many terrestrial craters in which no meteoritic debris is found: “A vast amount of energy would be liberated by its annihilation. In this manner, genuine meteorite craters of huge dimensions might be produced without a trace of the original meteoric material remaining at the site of the explosion.”

Other scientists scoffed: There might be ways to explain these phenomena without recourse to bizarre new forms of matter.

News accounts of the controversy introduced Rojansky’s word “contraterrene” to a wider public, along with the idea that contraterrene asteroids or comets might orbit the Sun.

This sparked John Campbell’s restless imagination. He imagined that space-going miners might pursue contraterrene asteroids as a rich source of energy, despite the deadly radiation risks in handling untouchable material. After author Robert Heinlein turned down the idea, Campbell offered it to veteran writer Jack Williamson. Williamson set to work.

His story, “Collision Orbit,” appeared in the July 1942 issue of Astounding Science Fiction under the pen name Will Stewart. In it, engineer Jim Drake struggles to exploit the energy of contraterrene asteroids by finding a way to manipulate them without touching them, using magnetic fields. (Read the logbook from this issue for more information.)

The space age brought evidence that no nearby planets, comets, or asteroids consist of antimatter, but physicists continued to be intrigued by the stuff, as did TV and movie screenwriters.

In 1988, Williamson visited Fermilab in Batavia, Illinois. I was delighted to show him the “factory” supplying antiprotons to the Tevatron collider, which, like Williamson’s engineers, manipulates antiparticles with magnetic fields. Williamson passed away in 2006, still publishing at age 98.

William S. Higgins is a radiation safety physicist in Fermilab’s Accelerator Division. He enjoys reading science fiction and listening to the music of Zeusaphones, or singing Tesla coils.