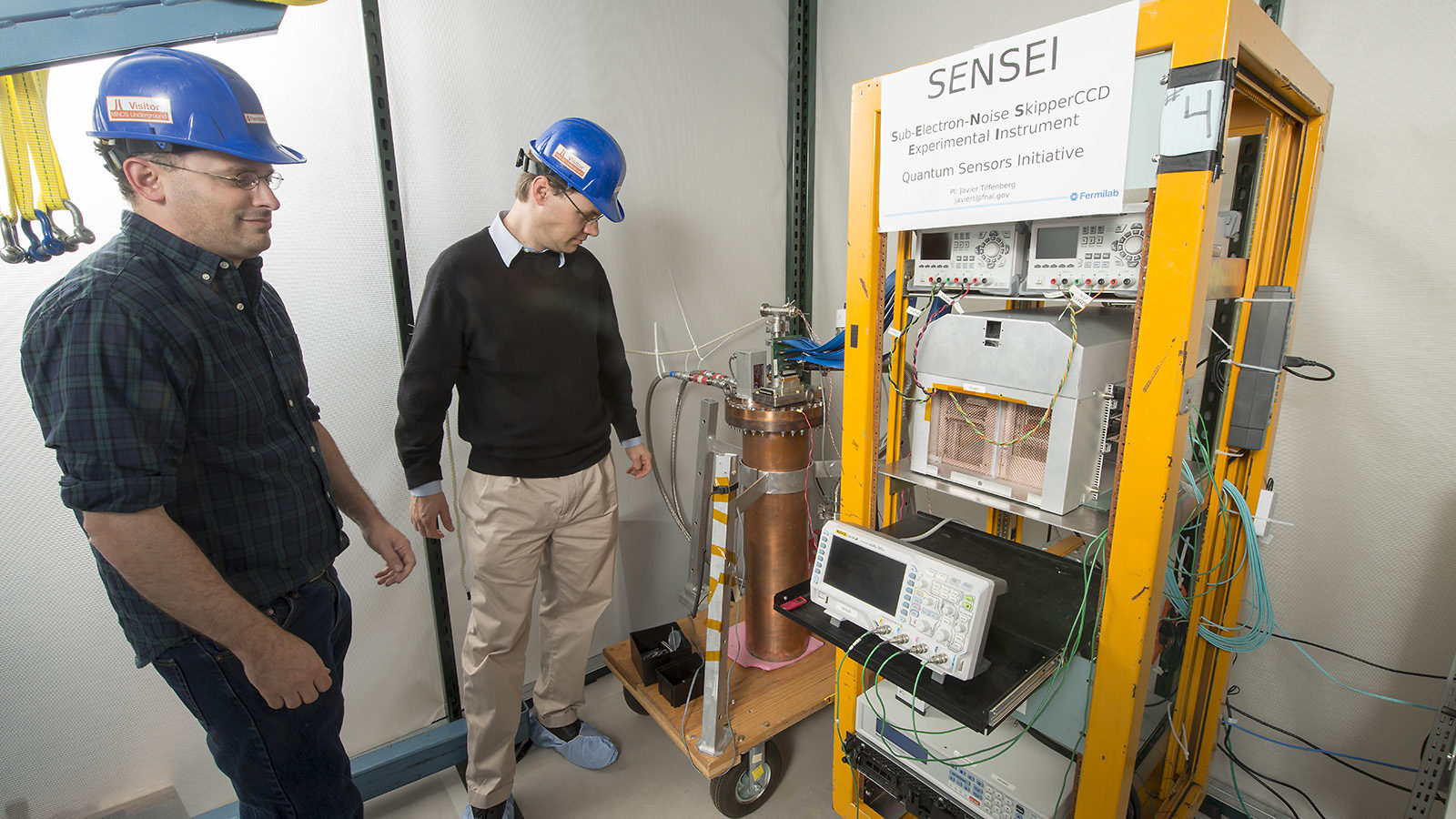 In a project called SENSEI, scientists are using innovative sensors developed over three decades to look for the lightest dark matter particles anyone has ever tried to detect.

Dark matter—so named because it doesn’t absorb, reflect or emit light—constitutes 27 percent of the universe, but the jury is still out on what it’s made of. The primary theoretical suspect for the main component of dark matter is a particle scientists have descriptively named the weakly interactive massive particle, or WIMP.

But since none of these heavy particles, which are expected to have a mass 100 times that of a proton, have shown up in experiments, it might be time for researchers to think small.

“There is a growing interest in looking for different kinds of dark matter that are additives to the standard WIMP model,” says Fermi National Accelerator Laboratory scientist Javier Tiffenberg, a leader of the SENSEI collaboration. “Lightweight, or low-mass, dark matter is a very compelling possibility, and for the first time, the technology is there to explore these candidates.”

“That is a big difference—you get a lot more energy transferred in this case because an electron is so light compared to a nucleus,” Tiffenberg says.

If dark matter had low mass—much smaller than the WIMP model suggests—then it would be many times lighter than an atomic nucleus. So if it were to collide with a nucleus, the resulting energy transfer would be far too small to tell us anything. It would be like throwing a ping-pong ball at a boulder: The heavy object wouldn’t go anywhere, and there would be no sign the two had come into contact.

An electron is nowhere near as heavy as an atomic nucleus. In fact, a single proton has about 1836 times more mass than an electron. So the collision of a low-mass dark matter particle with an electron has a much better chance of leaving a mark—it’s more bowling ball than boulder.

Bowling balls aren't exactly light, though. An energy transfer between a low-mass dark matter particle and an electron would leave only a blip of energy, one either too small for most detectors to pick up or easily overshadowed by noise in the data.

“The bowling ball will move a very tiny amount,” says Fermilab scientist Juan Estrada, a SENSEI collaborator. “You need a very precise detector to see this interaction of lightweight particles with something that is much heavier.”

SENSEI will use skipper charge-couple devices, also called skipper CCDs. CCDs have been used for other dark matter detection experiments, such as the Dark Matter in CCDs (or DAMIC) experiment operating at SNOLAB in Canada. These CCDs were a spinoff from sensors developed for use in the Dark Energy Camera in Chile and other dark energy search projects.

CCDs are typically made of silicon divided into pixels. When a dark matter particle passes through the CCD, it collides with the silicon’s electrons, knocking them free, leaving a net electric charge in each pixel the particle passes through. The electrons then flow through adjacent pixels and are ultimately read as a current in a device that measures the number of electrons freed from each CCD pixel. That measurement tells scientists about the mass and energy of the particle that got the chain reaction going. A massive particle, like a WIMP, would free a gusher of electrons, but a low-mass particle might free only one or two.

Typical CCDs can measure the charge left behind only once, which makes it difficult to decide if a tiny energy signal from one or two electrons is real or an error.

Skipper CCDs are a new generation of the technology that helps eliminate the “iffiness” of a measurement that has a one- or two-electron margin of error. “The big step forward for the skipper CCD is that we are able to measure this charge as many times as we want,” Tiffenberg says.

The charge left behind in the skipper CCD can be sampled multiple times and then averaged, a method that yields a more precise measurement of the charge deposited in each pixel than the measure-one-and-done technique. That’s the rule of statistics: With more data, you get closer to a property’s true value.

SENSEI scientists take advantage of the skipper CCD architecture, measuring the number of electrons in a single pixel a whopping 4000 times.

“This is a simple idea, but it took us 30 years to get it to work,” Estrada says.

From idea to reality to beyond

A small SENSEI prototype is currently running at Fermilab in a detector hall 385 feet below ground, and it has demonstrated that this detector design will work in the hunt for dark matter.

“It is the combination of the two LDRDs that really make SENSEI possible,” Estrada says.

Future SENSEI research will also receive a boost thanks to a recent grant from the Heising-Simons Foundation.

“SENSEI is very cool, but what’s really impressive is that the skipper CCD will allow the SENSEI science and a lot of other applications,” Estrada says. “Astronomical studies are limited by the sensitivity of their experimental measurements, and having sensors without noise is the equivalent of making your telescope bigger—more sensitive.”

SENSEI technology may also be critical in the hunt for a fourth type of neutrino, called the sterile neutrino, which seems to be even more shy than its three notoriously elusive neutrino family members.

A larger SENSEI detector equipped with more skipper CCDs will be deployed within the year. It’s possible it might not detect anything, sending researchers back to the drawing board in the hunt for dark matter. Or SENSEI might finally make contact with dark matter—and that would be SENSEI-tional.

Editor's note: This article is based on an article published by Fermilab.