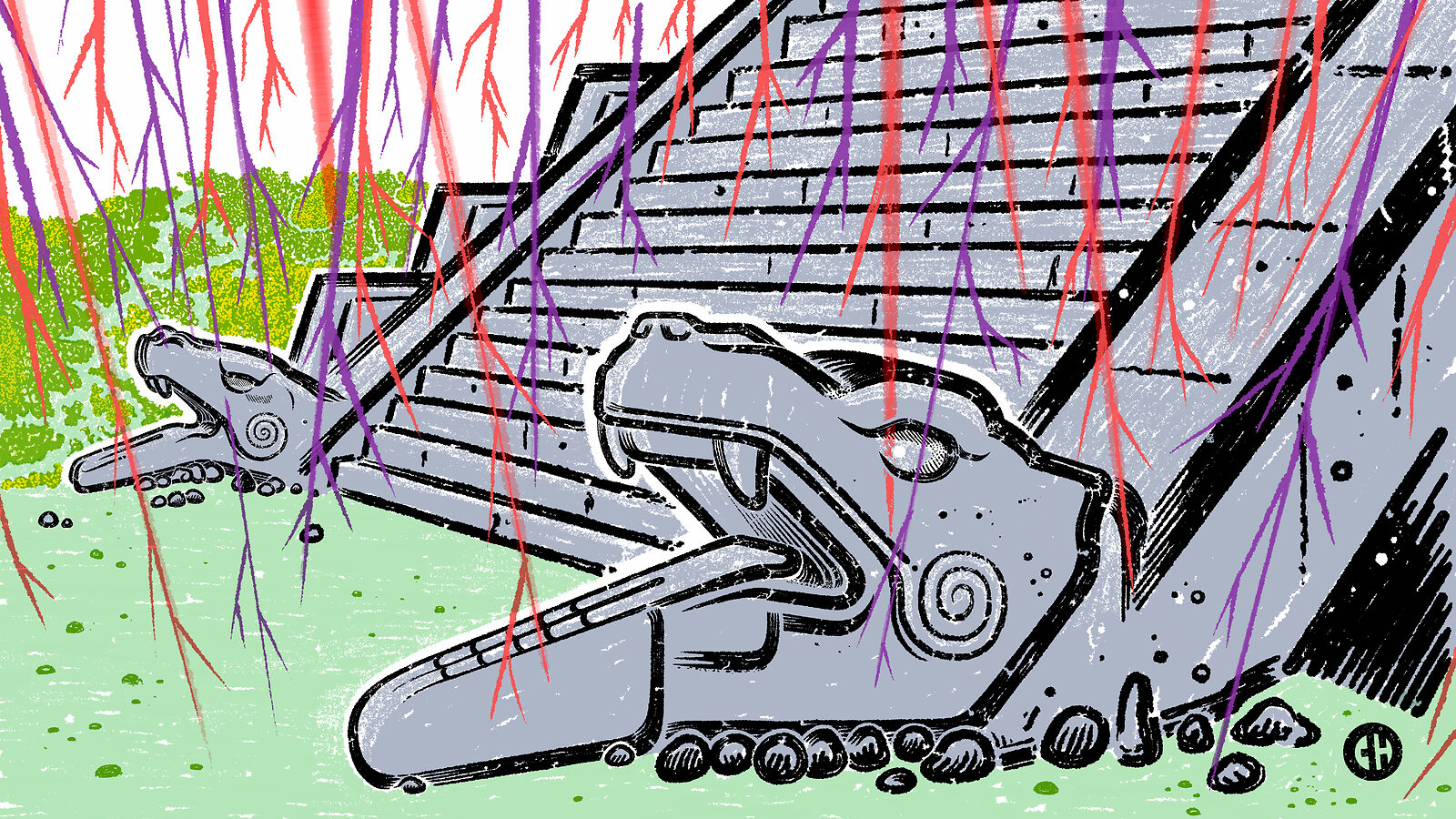 Every six months on the spring and autumn equinoxes, a serpent slithers down the side of the El Castillo pyramid in Chichén Itzá, Mexico.

Well, it’s not a real serpent—it’s an optical illusion caused by the perfect alignment of the sun and the intricate architecture of the step-pyramid, a demonstration of the mathematical precision of its Mayan architects. The pyramid was originally built as a temple dedicated to the feathered serpent god Kukulcán (or Quetzalcoatl).

For physicists and students at Chicago State University and Dominican University, it’s what’s inside El Castillo that counts. As part of a four-year program, physicists and archaeologists will team up to use particles that originate in outer space to study the otherwise inaccessible interior of the ancient pyramid.

The NAUM (Non-invasive Archaeometry Using Muons) Project will explore still-unsolved mysteries at the heart of El Castillo. The project will also provide research experience for undergraduate physics students from two minority-serving institutions, as the US Department of Education designates Chicago State as a Predominantly Black Institution and Dominican University as a Hispanic-Serving Institution.

Physicists Joseph Sagerer and Edmundo Garcia-Solis started discussing the idea that would become NAUM when they were both at the University of Illinois at Chicago 15 years ago. Garcia-Solis, now a physics professor and chair of the Department of Chemistry, Physics and Engineering Studies at CSU, suggested using particles called muons (electrons’ heavier cousins) to image the insides of pyramids in Mexico, inspired by his undergraduate advisor, Professor Arturo Menchaca Rocha of the National Autonomous University of Mexico.

The technique—muon tomography—uses naturally occurring muons to probe the interiors of otherwise-impenetrable structures, similar to the way X-rays are used to see inside bodies. But unlike X-rays used in medical imaging, muons for muon tomography don’t need to be manufactured; they are created in Earth’s atmosphere when cosmic rays collide with atoms of oxygen and nitrogen. This makes them a convenient tool for imaging the interiors of large structures, from volcanos and pyramids to nuclear reactor cannisters and shipping containers at national borders.

When muons travel through a structure, some will be stopped along the way, depending on the thickness and density of the material. By placing muon detectors around (and sometimes inside) a structure, researchers can see how many atmospheric muons make it from one side to the other. If more muons survive than expected, that means there could be a different material or just less material there than first thought. Or maybe even empty space—for example, a hidden room.

Since muon tomography has a foot in both archaeology and physics, it took a while for the project to get funding. In November 2020, the National Science Foundation gave awards for the initiative to Sagerer, now a senior physics lecturer at DU, and Garcia-Solis’ colleague Austin Harton, a professor of physics and engineering at CSU. Both the DU and CSU groups have now recruited undergraduates to work on NAUM. They will collaborate with a team in Mexico that includes National Autonomous University of Mexico students, led by Menchaca Rocha; Chichén Itzá’s chief archaeologist, José Francisco Osorio León; and the director of Frecuencia Cero Technology for Conservation, archaeologist Eduardo Pérez de Heredia.

They will get help from the US Department of Energy’s Fermi National Accelerator Laboratory, in part from Mark Adams, a UIC emeritus professor now working at Fermilab, and Sten Hansen, an electrical engineer recently retired from Fermilab.

Through a Strategic Partnership Project, Fermilab will also produce the scintillators for use in the muon detector. The long strips of extruded plastic include a material that lights up when a particle passes through. The light is then converted into electrical signals used to record where the particle hit the detector. Combining many of these strips allows NAUM to construct planes that register the position and direction of muons. The same robust and cost-effective technology is used in many high-energy experiments, such as Fermilab’s current Mu2e and former DZero experiments. The readout electronics for NAUM are based on the Mu2e’s Cosmic-Ray Veto system.

El Castillo is the largest pyramid in Chichén Itzá, a large city built by the Maya people and now an archaeological site in Yucatán, Mexico. Since the Mexican government began excavating it in the 1930s, archaeologists have found two additional buildings nested beneath the outermost structure, revealing that the pyramid is actually three successive buildings.

That’s good for NAUM—it means they can test their detector by looking for the known substructures and chambers. It’s also possible that the substructures have more undiscovered chambers that the students can look for. “The detector that we propose can locate variations in the density in regions as small as a cubic meter situated at any position inside of a large structure,” says Pérez de Heredia.

El Castillo is also an ideal size for NAUM: large enough that some muons will be stopped by the material, but small enough that the team can collect enough data in a relatively short time. The plan is to change the position of the detector every few weeks to get images from multiple angles over the course of a year.

The project is scheduled to take four years total, with the first three years dedicated to running simulations, developing software, and assembling and testing the detector.

Since they won’t need to travel to Chichén Itzá to run the experiment until the fourth year of the grant, the team doesn’t foresee major pandemic-related delays. “Because the detector is going to be built at CSU, it’s going to give us the opportunity to teach students techniques right at the university,” Garcia-Solis says.

In addition to exploring El Castillo, NAUM aims to increase the number of Black and Hispanic students in STEM disciplines and research.

It’s a much-needed intervention. According to a report by the American Institute of Physics, a mere 3% of US bachelor’s degrees were awarded to Black and African American students in 2018; Hispanic and Latino students were awarded 9%. In 2018 and 2019, less than 1% of physics PhDs in the US were earned by Black students and 2% by Hispanic students.

Orelle Bulgin, a CSU senior from Jamaica, says he’s excited for the opportunity to do hands-on research—finally. “I think [this project] is very important because [research opportunities] are what we’re probably lacking the most at Chicago State. We’ve been under-resourced, for the most part,” he says.

Harton and Garcia-Solis usually take two CSU undergraduates to CERN each summer. With that option gone because of the pandemic, they are grateful for the opportunity to bring physics research to their students instead. “When you have a program like this, you can bring students in and they can start working at all different levels,” Harton says. “As time goes on, they grow and they begin to enjoy physics, and then they have experience that can be brought on to the next level in grad school.”

Sagerer adds, “What’s important is getting the students to a mindset where they understand how good they are. And giving them an opportunity to demonstrate that.”