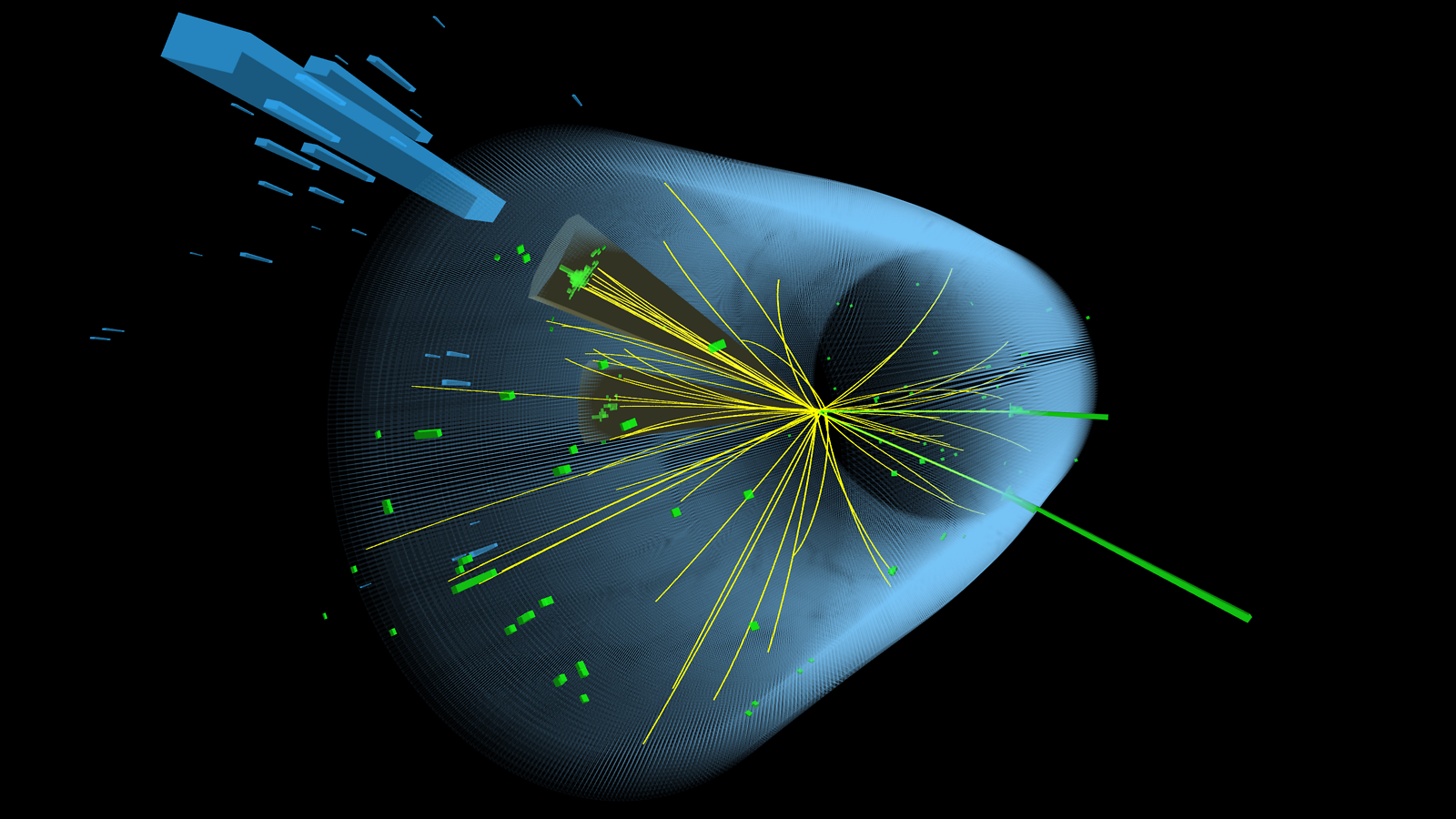 In 2012, scientists on the CMS and ATLAS experiments at CERN’s Large Hadron Collider discovered the Higgs boson. Now, they’re looking for two Higgs bosons born from a single collision.

“The Higgs self-coupling has implications in understanding the origin and ultimate fate of the universe,” says Nan Lu, a postdoc at the California Institute of Technology supported by the US Department of Energy’s Office of Science. “This process is a lighthouse that guides the future of particle physics.”

Higgs bosons are the physical manifestations of the Higgs field, an invisible medium that is woven into the fabric of spacetime.

The LHC can generate Higgs bosons by colliding protons and transmitting the stored energy into the Higgs field—much like a pebble striking the surface of a river and transferring its kinetic energy into a ripple. This process happens at a rate of about one in a billion collisions.

On even rarer occasions, this energy transfer can generate not one but two Higgs bosons at the same time. These Higgs boson twins could help scientists characterize a largely unmeasured facet of the Higgs mechanism: the shape of the Higgs potential.

The boson, the field and the Higgs potential

The Brout-Englert-Higgs mechanism—to use its full name—consists of three interlinking facets: the Higgs boson, the Higgs field and the Higgs potential.

“You can think about it like a river,” says Irene Dutta, a graduate student at Caltech. “The Higgs boson is a ripple, the Higgs field is the water, and the Higgs potential is the shape of the riverbed.”

The Higgs boson—the ripple—gives scientists a glimpse of the otherwise invisible Higgs field—the water. But underneath it all is the Higgs potential—the riverbed, or a mathematical function that determines the different possible energy states of the Higgs field.

“A river might seem calm and flat,” Dutta says, “but there could be a waterfall that leads to much lower ground that we cannot see from where we are.”

If the potential dropped and the Higgs field spontaneously fell into a lower energy state, the universe as we know it would evaporate.

“The current calculations indicate that we could be living in a false vacuum,” says Thong Nguyen, a graduate student at Caltech. “This means that at any moment, the Higgs field could tunnel through the potential barrier to a true negative-energy vacuum, creating an expanding singularity bubble that eventually swallows up the entire universe.”

(The universe has yet to disappear in its 14 billion years, at least, and physicists do not anticipate that it will happen anytime soon.)

The origin of matter

According to Nguyen, the Higgs field has already fallen from a high energy state into a lower one once before.

This first transition could be the missing link in one of the biggest mysteries in physics: the dominance of matter over its equal-and-opposite counterpart, antimatter.

The evolution of the Higgs field during the primordial universe could be responsible for this imbalance.

“If it’s a smooth transition, as our models predict, then the entire Higgs field would have cooled homogeneously, like water slowly freezing into ice,” Nguyen says. “But if it’s an abrupt transition, then bubbles could have formed and eventually expanded to fill the entire universe.”

These bubbles in the Higgs field could have serendipitously sheltered the small excess of matter that eventually formed everything.

The Higgs potential regulates the behavior of Higgs bosons, including their interactions with one another. If scientists can find and study Higgs-boson pairs, then they can work backwards and indirectly probe the Higgs potential’s shape.

The scarcity of this process makes it a classic needle-in-a-haystack problem.

“During Run II [which ended in December 2018], the LHC would have generated about 7.5 million Higgs bosons,” Dutta says. “But it would have only produced about 4500 Higgs-boson pairs.”

Higgs bosons are notoriously difficult to separate from look-alike subatomic processes. Even for a very clean signature—a Higgs boson decaying into two photons—there are 10 identical background events for every real Higgs boson.

“We’re completely swamped by the background,” Dutta says. “The di-Higgs production process is not an easy observation to make and our best chance of seeing it is with the High-Luminosity LHC upgrade,” now in full progress.

Once this upgrade is completed later this decade, future runs will increase the total number of potential collisions scientists have to study by at least a factor of 10.

The overall US contributions to the LHC experimental research program and HL-LHC upgrade are funded by the US Department of Energy and the National Science Foundation. With the HL-LHC only a few years away, scientists are already honing their analysis methods.

They have begun to apply machine-learning techniques inspired by natural language processing. Nguyen is developing and training machine-learning algorithms to recognize the subtle differences between Higgs boson signatures and look-alike background processes (much like a natural-language-processing algorithm separates similar sounding words like “close” and “clothes.”)

“We can treat each particle like a word in a sentence,” Nguyen says.

Currently, scientists are working with only a few signatures for Higgs-boson pairs, but they hope to study more complex signatures over the next few years.

“This research is still in the early stages but moving very fast,” Lu says.