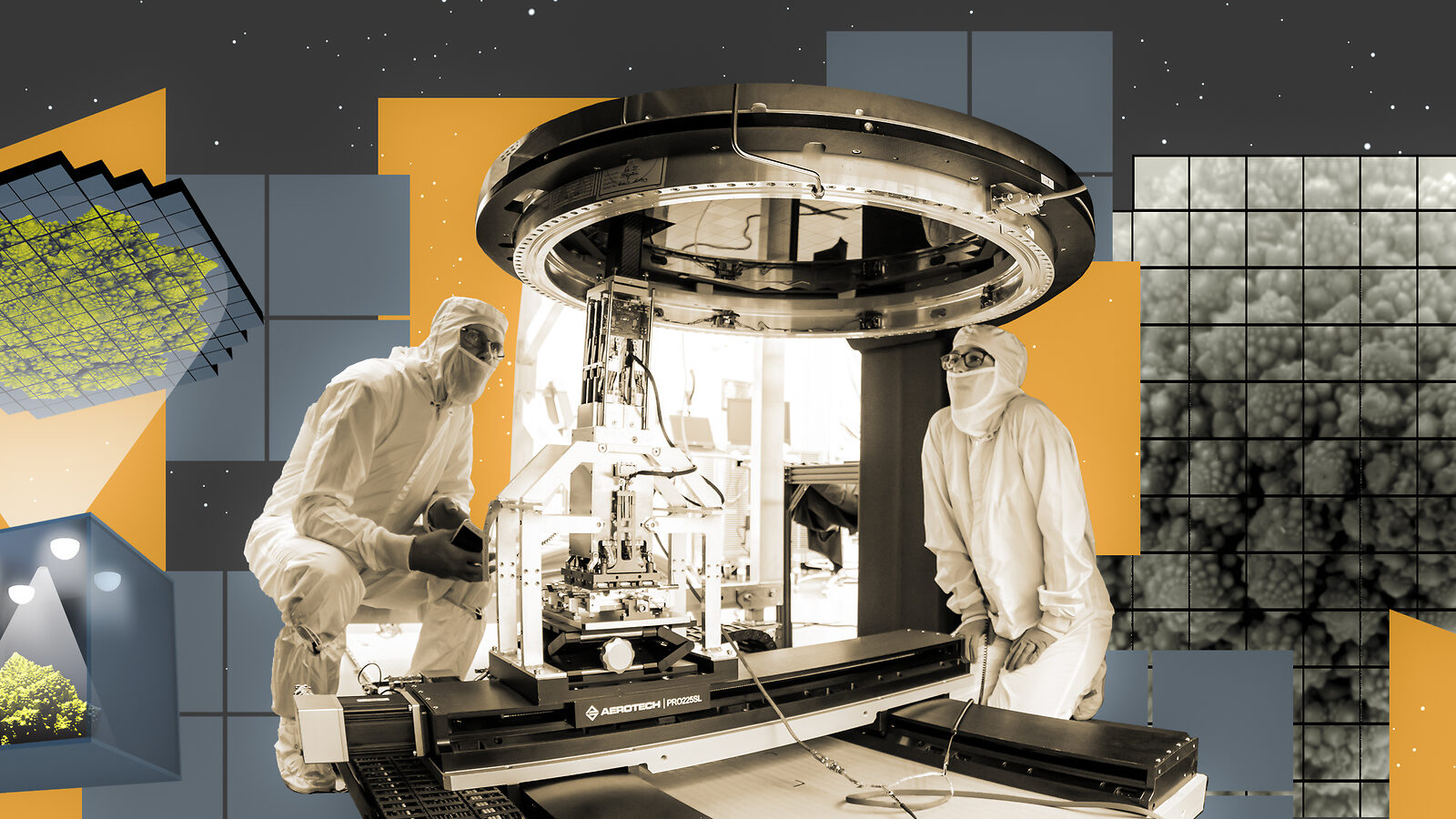 Crews at the Department of Energy’s SLAC National Accelerator Laboratory have taken the first 3200-megapixel digital photos—the largest ever taken in a single shot—with an extraordinary array of imaging sensors that will become the heart and soul of the future camera of Vera C. Rubin Observatory.

The images are so large that it would take 378 4K ultra-high-definition TV screens to display one of them in full size, and their resolution is so high that you could see a golf ball from about 15 miles away. These and other properties will soon drive unprecedented astrophysical research.

Next, the sensor array will be integrated into the world’s largest digital camera, currently under construction at SLAC. Once installed at Rubin Observatory in Chile, the camera will produce panoramic images of the complete Southern sky—one panorama every few nights for 10 years.

Its data will feed into the Rubin Observatory Legacy Survey of Space and Time, or LSST—a catalog of more galaxies than there are living people on Earth and of the motions of countless astrophysical objects. Using the LSST Camera, the observatory will create the largest astronomical movie of all time and shed light on some of the biggest mysteries of the universe, including dark matter and dark energy.

The first images taken with the sensors were a test for the camera’s focal plane, whose assembly was completed at SLAC in January.

“This is a huge milestone for us,” says Vincent Riot, LSST Camera project manager from Lawrence Livermore National Laboratory. “The focal plane will produce the images for the LSST, so it’s the capable and sensitive eye of the Rubin Observatory.”

SLAC’s Steven Kahn, director of the observatory, says, “This achievement is among the most significant of the entire Rubin Observatory Project. The completion of the LSST Camera focal plane and its successful tests is a huge victory by the camera team that will enable Rubin Observatory to deliver next-generation astronomical science.” 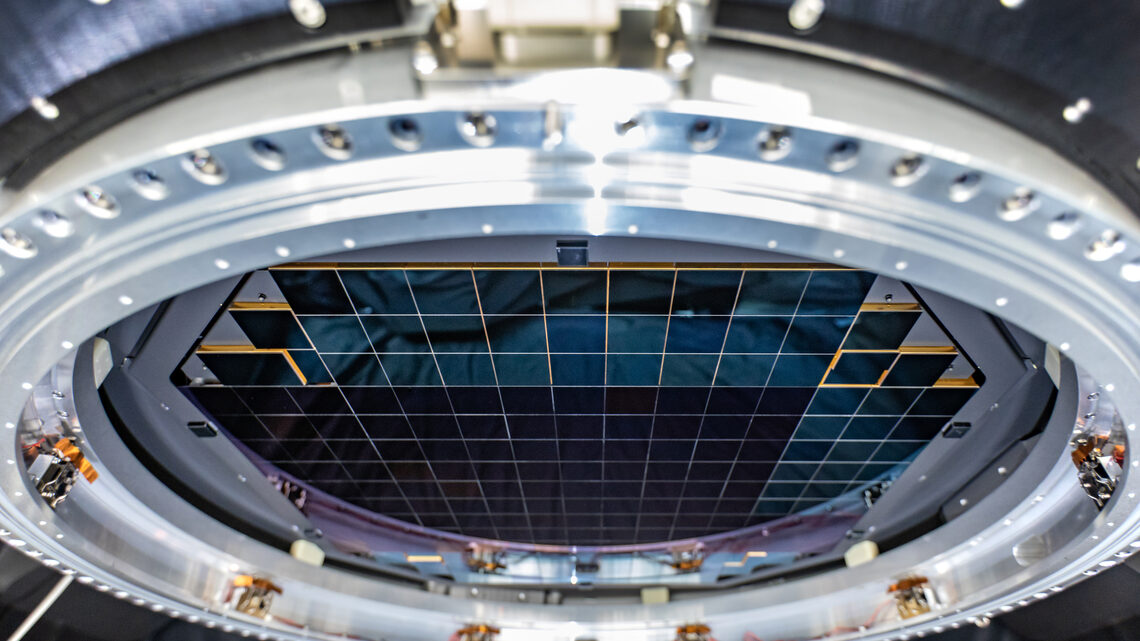 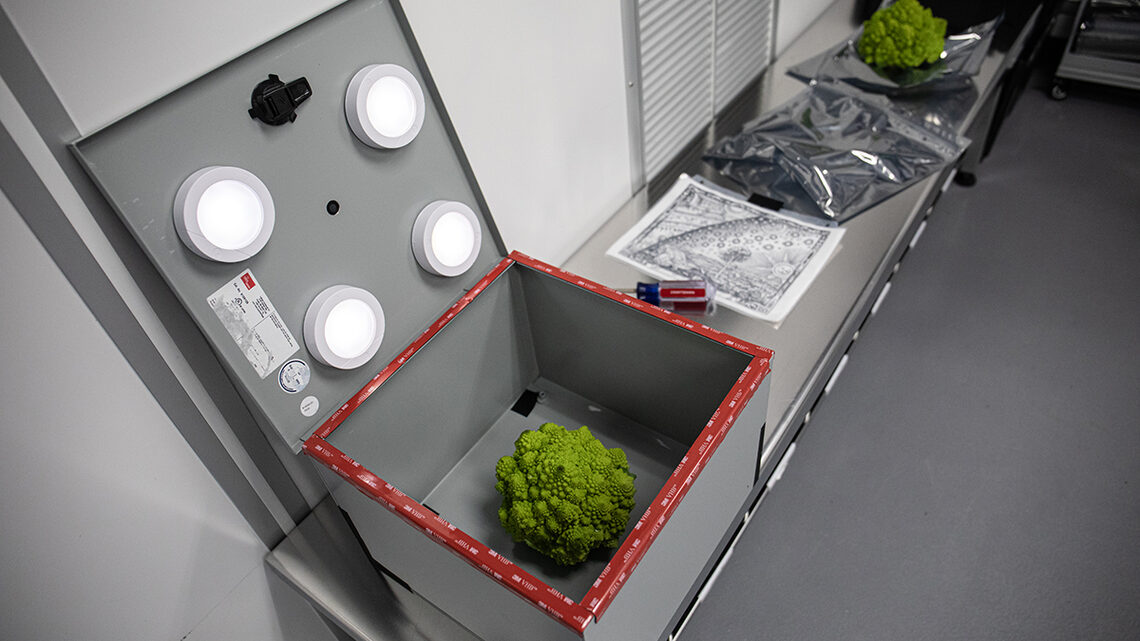 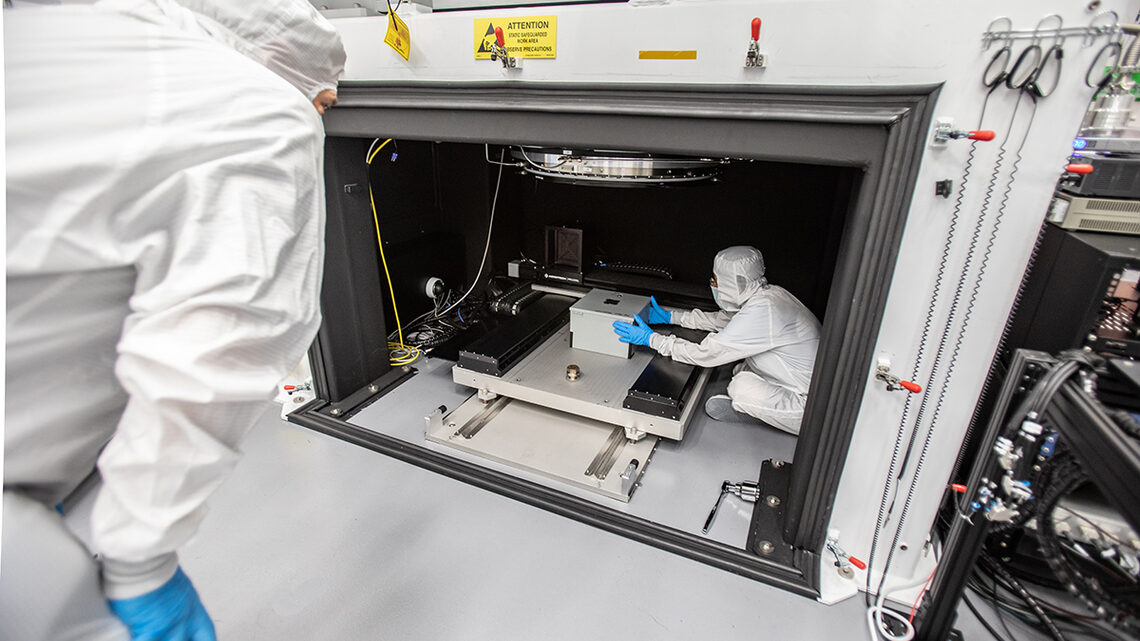 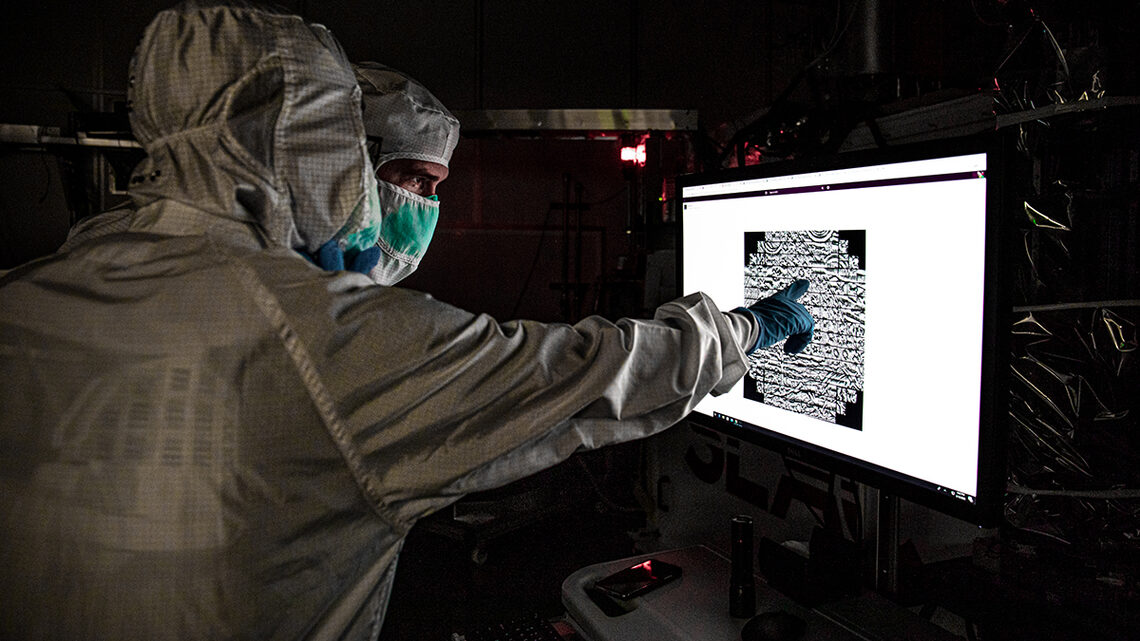 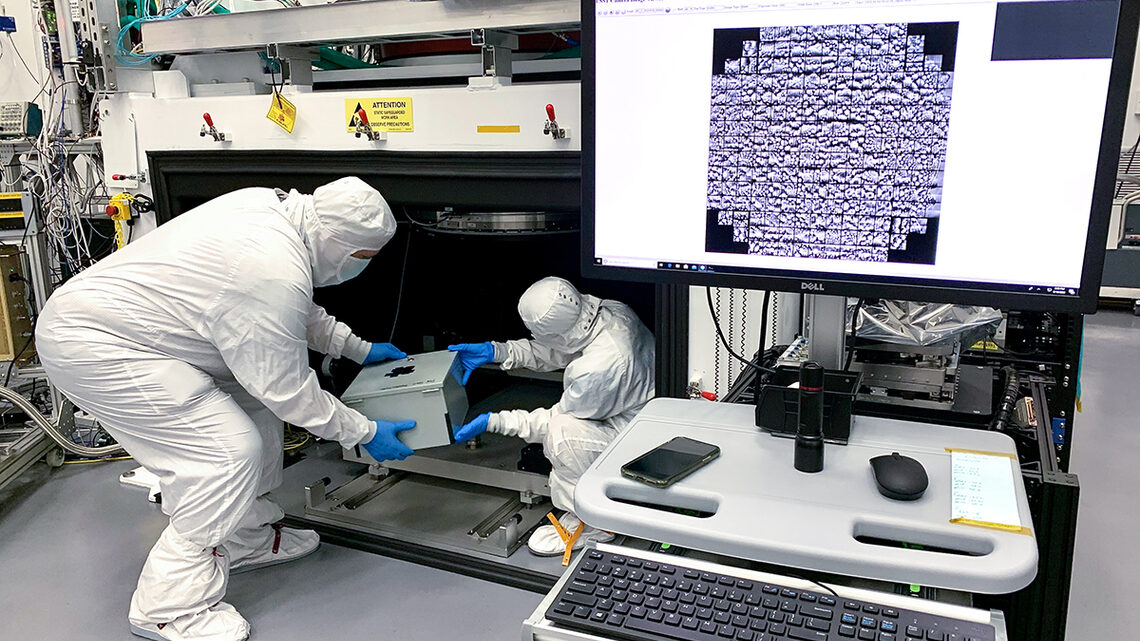 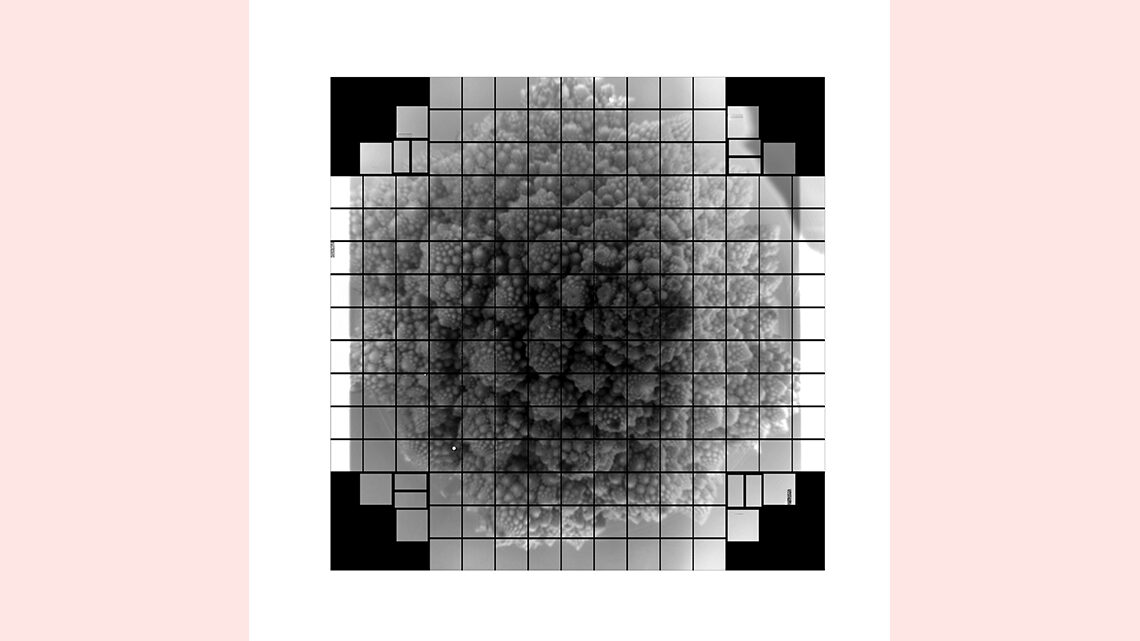 Courtesy of SLAC
Previous Next

A technological marvel for the best science

In a way, the focal plane is similar to the imaging sensor of a digital consumer camera or the camera in a cell phone: It captures light emitted from or reflected by an object and converts it into electrical signals that are used to produce a digital image. But the LSST Camera focal plane is much more sophisticated. In fact, it contains 189 individual sensors, or charge-coupled devices, that each bring 16 megapixels to the table—about the same number as the imaging sensors of most modern digital cameras.

Sets of nine CCDs and their supporting electronics were assembled into square units, called “science rafts,” at Brookhaven National Laboratory and shipped to SLAC. There, the camera team inserted 21 of them, plus an additional four specialty rafts not used for imaging, into a grid that holds them in place.

The focal plane has some truly extraordinary properties. Not only does it contain a whopping 3.2 billion pixels, but its pixels are also very small—about 10 microns wide—and the focal plane itself is extremely flat, varying by no more than a tenth of the width of a human hair. This allows the camera to produce sharp images in very high resolution. At more than 2 feet wide, the focal plane is enormous compared to the 1.4-inch-wide imaging sensor of a full-frame consumer camera and large enough to capture a portion of the sky about the size of 40 full moons. Finally, the whole telescope is designed in such a way that the imaging sensors will be able to spot objects 100 million times dimmer than those visible to the naked eye—a sensitivity that would let you see a candle from thousands of miles away.

“These specifications are just astounding,” says Steven Ritz, project scientist for the LSST Camera at the University of California, Santa Cruz. “These unique features will enable the Rubin Observatory’s ambitious science program.”

Over 10 years, the camera will collect images of about 20 billion galaxies. “These data will improve our knowledge of how galaxies have evolved over time and will let us test our models of dark matter and dark energy more deeply and precisely than ever,” Ritz says. “The observatory will be a wonderful facility for a broad range of science—from detailed studies of our solar system to studies of faraway objects toward the edge of the visible universe.”

The completion of the focal plane earlier this year concluded six nerve-wracking months for the SLAC crew that inserted the 25 rafts into their narrow slots in the grid. To maximize the imaging area, the gaps between sensors on neighboring rafts are less than five human hairs wide. Since the imaging sensors easily crack if they touch each other, this made the whole operation very tricky.

The rafts are also costly—up to $3 million apiece.

SLAC mechanical engineer Hannah Pollek, who worked at the front line of sensor integration, says, “The combination of high stakes and tight tolerances made this project very challenging. But with a versatile team we pretty much nailed it.”

The team members spent a year preparing for the raft installation by installing numerous “practice” rafts that did not go into the final focal plane. That allowed them to perfect the procedure of pulling each of the 2-foot-tall, 20-pound rafts into the grid using a specialized gantry developed by SLAC’s Travis Lange, lead mechanical engineer on the raft installation.

Tim Bond, head of the LSST Camera Integration and Test team at SLAC, says, “The sheer size of the individual camera components is impressive, and so are the sizes of the teams working on them. It took a well-choreographed team to complete the focal plane assembly, and absolutely everyone working on it rose to the challenge.”

The focal plane has been placed inside a cryostat, where the sensors are cooled down to negative 150 degrees Fahrenheit, their required operating temperature. After several months without lab access due to the coronavirus pandemic, the camera team resumed its work in May with limited capacity and following strict social distancing requirements. Extensive tests are now underway to make sure the focal plane meets the technical requirements needed to support Rubin Observatory’s science program.

Taking the first 3200-megapixel images of a variety of objects, including a head of Romanesco—a type of broccoli that was chosen for its very detailed surface structure—was one of these tests. To do so without a fully assembled camera, the SLAC team used a 150-micron pinhole to project images onto the focal plane. These photos show the extraordinary detail captured by the imaging sensors.

“Taking these images is a major accomplishment,” says SLAC’s Aaron Roodman, the scientist responsible for the assembly and testing of the LSST Camera. “With the tight specifications we really pushed the limits of what’s possible to take advantage of every square millimeter of the focal plane and maximize the science we can do with it.”

Camera team on the home stretch

More challenging work lies ahead as the team completes the camera assembly.

In the next few months, they will insert the cryostat with the focal plane into the camera body and add the camera’s lenses, including the world’s largest optical lens, a shutter and a filter exchange system for studies of the night sky in different colors. By mid-2021, the SUV-sized camera will be ready for final testing before it begins its journey to Chile.

“Nearing completion of the camera is very exciting, and we’re proud of playing such a central role in building this key component of Rubin Observatory,” says JoAnne Hewett, SLAC’s chief research officer and associate lab director for fundamental physics. “It’s a milestone that brings us a big step closer to exploring fundamental questions about the universe in ways we haven’t been able to before.”

Editor's note: A version of this article was published as a SLAC press release.