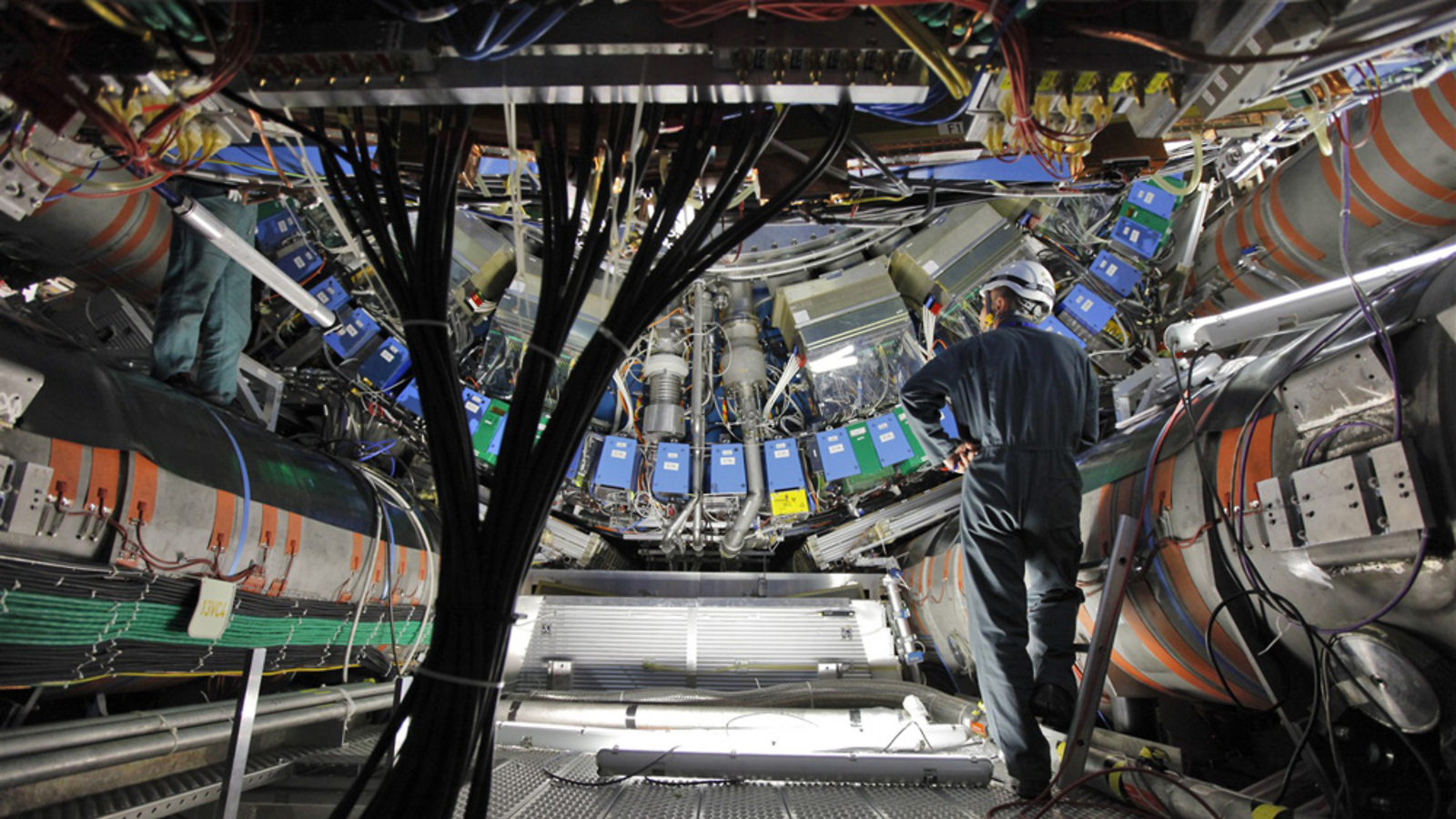 The Large Hadron Collider will go into a long shutdown early next year to allow scientists and technicians to prepare it for higher collision energy in 2015.

It has been running at 7 TeV; scientists plan for it to reemerge at upward of 13 TeV. Beginning in February of 2013, highly coordinated teams will spend 20 months preparing its equipment for the change.

Higher luminosity means more particle collisions, and the experiments will need more advanced equipment to keep up. With the detectors the most accessible they have been since their original construction, the four big LHC experiments will take the opportunity to perform upgrades and routine repairs. The collaborations already have plans for the new year.

The ALICE experiment focuses on collisions of heavy ions to study the conditions present just after the big bang. The collisions produce a quark-gluon plasma, a hot soup in which quarks travel freely instead of being bound into particles. They also produce high-energy quarks and gluons that interact with the plasma and then fragment into jets of particles and gamma rays.

“Since the gamma ray doesn't undergo the strong interaction, it escapes the hot, dense matter produced, and its transverse momentum is equal and opposite to that of the recoiling quark,” ALICE physicist Terry Awes said.

Technicians will also complete the ALICE experiment's main electron detector, called the Transition Radiation Detector, during the long shutdown. The detector is close to completion, with 13 out of 18 modules installed.

“The goal is to finally complete the detector with the five additional supermodules,” deputy technical coordinator Arturo Tauro said.

The final modules will allow the detector to measure particles over a broader area.

ATLAS will add a fourth layer of pixels, known as the Insertable B-Layer, to its pixel detector. The increased number of pixels will enable measurements at a location closer to where particle collisions occur and allow scientists more accurately to identify jets of particles produced from bottom quarks.

Identifying these particles is important in the search for the Higgs boson, which, according to the Standard Model, frequently decays into bottom quarks. The ATLAS and CMS experiments discovered a Higgs-like particle this summer.

“Studying the fraction of bottom quark decays could help demonstrate if CERN scientists observed a completely Standard Model Higgs or something where the decay rates imply that additional physics contributions must exist," ATLAS physicist Abe Seiden said. "The decays to bottom quarks is a difficult measurement, and the Insertable B-layer will make a big difference to the feasibility of the measurement.”

The ATLAS collaboration will also install and integrate more muon chambers to strengthen the detectors’ measurement of muons produced in particle collisions. They will also put in place new beam pipes made of aluminum and beryllium to help reduce background particles in future collisions.

The LHC experiments cannot record data from every single collision that occurs, so they select or discard this information at a split second's notice using automatic triggers. At higher luminosity, the experiments will deal with more collisions and therefore will need better trigger systems.

During the long shutdown, the CMS experiment plans to add a new layer to their muon detector, which will help them to decide which collisions are worth studying.

“This fourth layer of the muon system was left off because it wasn’t necessary at low luminosity,” CMS technical coordinator Austin Ball said. “Now, in order to be able to maintain good trigger selectivity at high luminosity, … you need this fourth layer."

Another priority of the CMS experiment during the shutdown is ensuring that their tracking detector, which tracks the paths of individual particles, can operate at dramatically colder temperatures. The tracking detector is made of silicon, which radiation degrades even at freezing temperatures. To preserve the silicon amid higher radiation, the temperature will be lowered to roughly -15 degrees Fahrenheit.

LHCb’s most important project during the shutdown will be to replace a segment of beam pipe and its support structures. The new pipe will be able to withstand temperature changes and radiation better, and the lighter support structure will reduce background in the detector.

LHCb will also begin to prepare for the next planned shutdown, in 2018, when they will install an upgrade to their detector.

“We have one major limiting factor in this experiment: LHC can deliver much more luminosity than we can take,” LHCb upgrade coordinator Andreas Schopper said. “We want to increase the speed with which we can read out the detector from 1 MHz to 40 MHz.”

Scientists at the experiment want to use the 2013 shutdown to prepare the infrastructure and lay cables, which are needed for the new detector. They will continue planning and conducting research and development for the upgrade during the shutdown, and they hope to decide on a detailed detector design by late 2013.

Just because the LHC will be without beam doesn't mean that research at the experiments will stop. While the collider is operating, the experiments put out a million gigabytes of information every second. Separated by a computer algorithm, the data is sorted, and some is stored for later analysis.