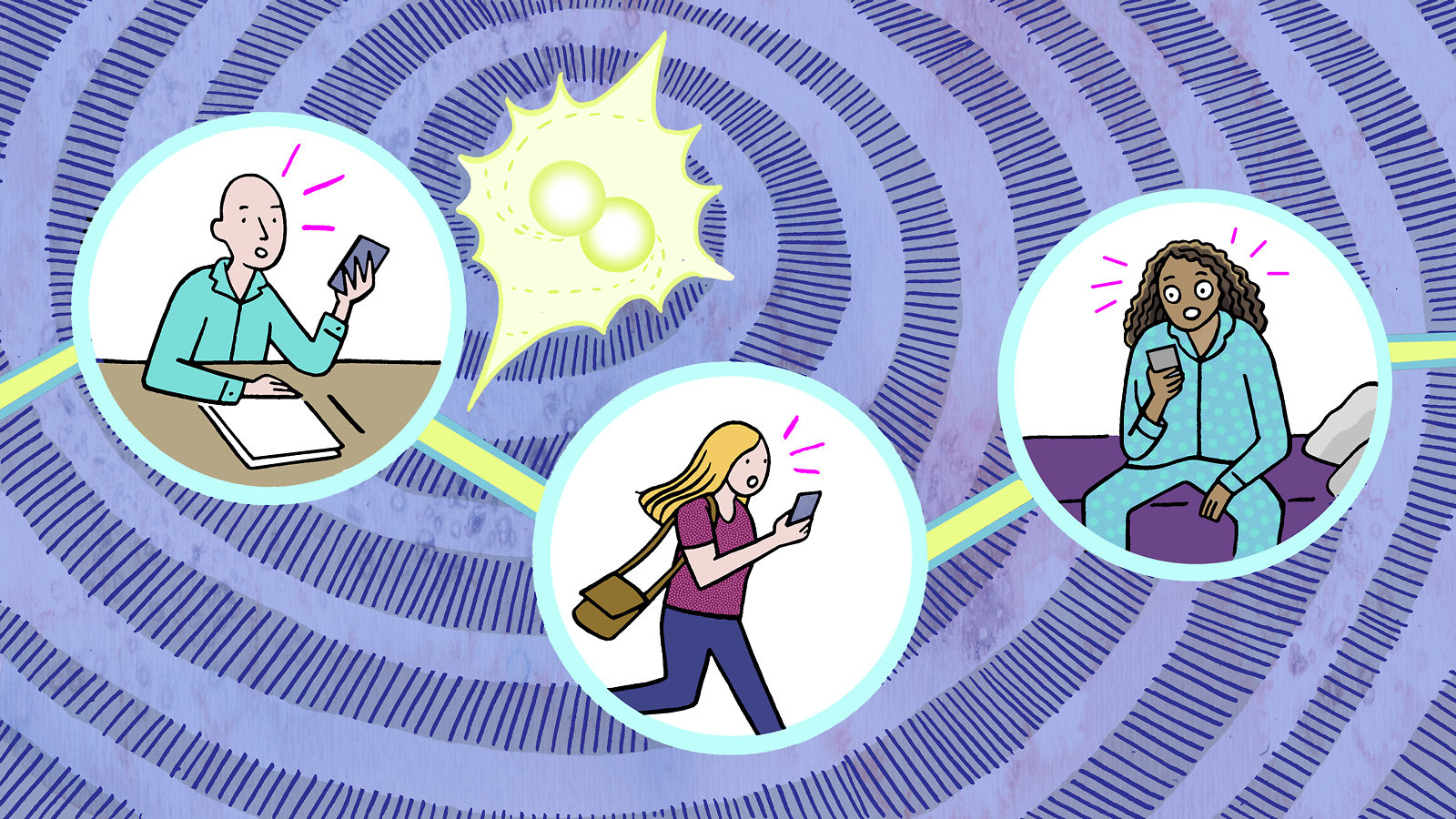 There’s a large subset of astronomers and astrophysicists who remember where they were the morning of August 17, 2017.

Edo Berger was in a curriculum review committee meeting.

Colleen Wilson-Hodge had just gone from the gym to a management training.

Marcelle Soares-Santos was asleep, having stayed up late the night before analyzing data from a collision between two distant black holes.

Each one was interrupted by an alert that a network of detectors had received a particularly strong signal from an astronomical event. They all sprang into an action to see if they could find where it was coming from.

The discovery that followed—that the signals came from a collision of two collapsed stars called neutron stars—validated theoretical models, raised new questions and ushered in a new era of astronomy and astrophysics, giving scientists new tools to understand fundamental questions about our universe.

About a week after the alert, the gravitational-wave observatories whose detection had set off the cascade of events shut down for scheduled maintenance and updates.

Now, one year later, the last, fading radio waves and X-rays from the neutron star collision continue to arrive. And the astronomy and astrophysics community is preparing for early 2019, when the gravitational-wave observatories are scheduled to start their next run.

Gravitational waves have been described as ripples in the fabric of spacetime. They are the wake left behind when an object with gravitational pull—so, any object with mass—changes its speed. When two enormous neutron stars go through a particularly drastic change in speed by colliding and merging, the gravitational waves released are powerful enough for scientists to detect them on Earth, 130 million light-years away.

That’s what happened at 12:41 universal time last August. The Laser Interferometer Gravitational-Wave Observatory detectors in Hanford, Washington, and Livingston, Louisiana, recorded gravitational waves the likes of which no one had ever seen. Previous gravitational-wave signals had lasted a few seconds; this one was in range for more than 100. Additional data from the Virgo gravitational-wave detector near Pisa, Italy, helped scientists triangulate the gravitational waves’ origin in the sky.

Astrophysicist Wilson-Hodge, the principal investigator on the NASA’s Fermi Gamma-ray Space Telescope’s Gamma-ray Burst Monitor team, was in training, learning how to motivate her team. When she received the notification from LIGO-Virgo, she knew motivation wouldn’t be hard to find: The GBM sent out an alert of its own that morning from a high-energy blast of light called a gamma-ray burst, recorded just two seconds after the gravitational-wave signal passed the Earth. “It was pretty clear it was something really exciting,” she says.

A quick analysis of the signals from LIGO-Virgo and Fermi set off a cascade of follow-up detections. Soares-Santos, then an astrophysicist at the US Department of Energy’s Fermi National Accelerator Laboratory, and Berger, a professor of astronomy at Harvard University, responded to the intriguing alert from LIGO-Virgo with colleagues on the Dark Energy Survey.

Soares-Santos and Berger received the alert early in the morning, but they would have to wait until nighttime in Chile to use the Dark Energy Camera, which is funded in part by the DOE Office of Science, to view it. That meant 10 hours to coordinate and plan, creating a list of possible galaxy locations. They knew that, once the sun set, they would have only about an hour to try to find the source before it moved below the horizon.

“It was very intense,” Soares-Santos says. “Everyone got together and played their part.”

Once the clock was running, they began systematically photographing the area of the sky, then manually checking those images against previous images. It wasn’t long until they found a new bright spot near galaxy NGC 4993.

“It was amazing,” Berger says. “It was so clear. There was no ambiguity. It was much better than anything I ever imagined.”

Five other teams also succeeded in independently identifying the host galaxy in the first minutes of the Chilean night. In the end, some 70 ground- and space-based detectors caught signals from the neutron-star merger in the sky. It was the first modern instance of multi-messenger astronomy, detecting a cosmic event with at least two types of signals, such as light (including gamma rays and X-rays) and gravitational waves.

Astronomers observed the merger with optical telescopes for three weeks after the discovery, until it was no longer within their field of view. But radio telescopes at the Very Large Array in New Mexico and the Chandra X-ray Observatory satellite continue to observe radio waves and X-rays, respectively, from the event. The radio waves and X-rays started out dim and then grew more intense for the first 200 days. They are only now starting to fade.

“The manifestation of what’s happening after the merger is so complex,” Berger says. “There are all these different processes going on. We’re still in the process of patching together a comprehensive story of exactly what happened with this.”

One thing that is already clear is that the theoretical model of a kilonova, a term coined in 2010 by Columbia University professor Brian Metzger to describe the bright collision of neutron stars, has turned out to be an elegant predictor of the merger process. “It was pretty surreal to see the data coming in,” Metzger says. “If we hadn’t had the theory to predict what it would look like, we wouldn’t have known what to look for. For me, it was a vindication.”

It also proved the theory that the nuclear reactions happening within the kilonova, called rapid neutron capture process, or r-process, were the source of most, if not all, of the universe’s heavy metals such as gold, platinum and silver.

“It’s really incredible,” Berger says. “That’s not what it says in the textbooks.”

“The material that ended up in my own wedding band was once probably near a black hole,” Metzger says. “That’s pretty wild.”

Researchers were eventually able to describe what most likely happened when the stars merged: They briefly become one massive neutron star before collapsing into a black hole. In addition, the event gave astrophysicists like Soares-Santos another way to measure the rate at which the universe is expanding, called the Hubble parameter. “Since cosmology is my home turf, that’s really exciting,” Soares-Santos says.

A new era of multi-messenger astronomy

Research from the merger has resulted in about 800 papers (and counting) and numerous prizes, but for astronomers and astrophysicists, it’s also the start of a new beginning.

“We now have the key to understand the universe in a new way,” says Soares-Santos, who is now a professor at Brandeis University. “We can use the centuries of expertise built on observing the skies on the electromagnetic spectrum and add this new piece of information to build a complete picture.”

When LIGO and Virgo turn on again in early 2019, researchers predict that they could see as many as 10 neutron star events in a year.

That has never been a possibility before, Soares-Santos says. “If we have to do this 10 times in a year, we are probably not going to survive.”

Berger’s group has published nearly 20 papers from the August 17 event and continues to find new ways to analyze the data. “I’m excited and slightly terrified at the prospect of one event a month,” he says.

To deal with the coming deluge, researchers are working to automate processes to better prioritize resources and coordinate communication when events happen. Organizing thousands of independent astronomers around the world is no small feat, Soares-Santos says.

“The only thing keeping us all together is the interest in the same science,” she says. “It amazes me every day that we were able to make this happen.”

In the next LIGO-Virgo run, astronomers are hoping to find out whether this neutron-star collision was typical, and to witness another kind of event: a neutron star merging with a black hole. Does a neutron star just fall in a black hole, or is it shredded first? Seeing such an event could provide a new way to study the properties of the event horizon, the “point of no return” around a black hole.

“The whole field is going to explode now,” Metzger says.

Berger, a gamma-ray-burst expert, hopes to see a neutron star merger in which the jet, the stream of material ejected from the collision, is pointed directly at Earth. In the August 2017 merger, astronomers believe that they viewed the jet at an angle; a well-aligned jet could be much brighter and could potentially allow astronomers to observe it for months or years. “That would be an incredible event,” he says. “That would be the one to throw all the resources we have at.”

Wilson-Hodge and her colleagues are developing ideas for future NASA missions, including launching more sensitive X-ray and gamma-ray-burst detectors. “Everyone is really excited about the ability to do astronomy with these new tools,” she says. “Seeing the science that we can do expand is really exciting.”

Perhaps most importantly, the collision detection has brought new energy into the field and inspired a younger generation of astronomers eager to take advantage of a new way of understanding the cosmos.

“It’s the gift that keeps on giving, in a really incredible sense,” Berger says. “It’s exciting and exhausting. It’s everything I love about science.”