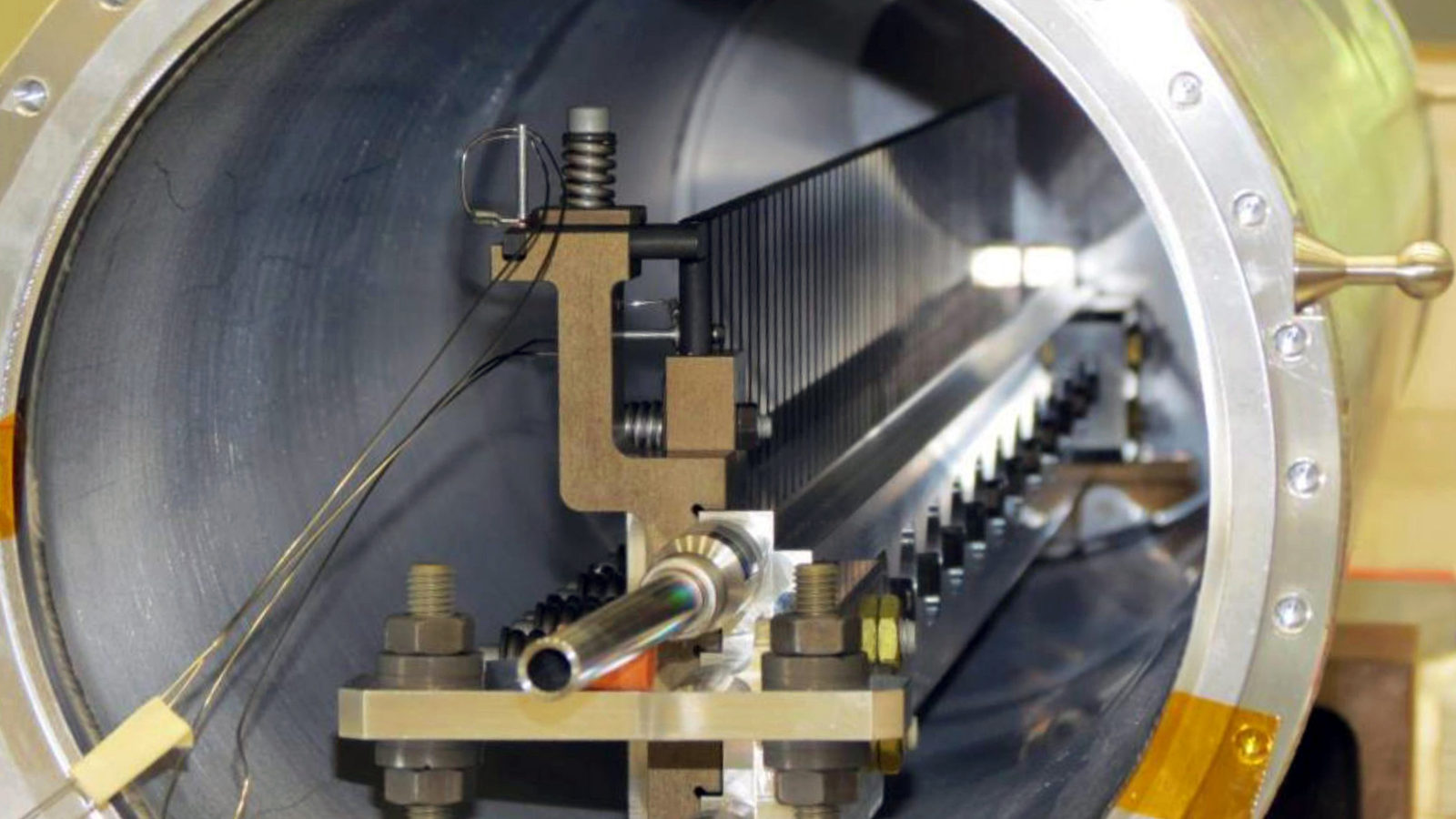 For some, a target is part of a game of darts. For others, it’s a retail chain. In particle physics, it’s the site of an intense, complex environment that plays a crucial role in generating the universe’s smallest components for scientists to study.

The target is an unsung player in particle physics experiments, often going unnoticed behind scene-stealing light-speed particle beams and giant particle detectors. Yet many experiments wouldn’t exist without a target.

Scientists and engineers at Fermilab are currently investigating targets for the study of neutrinos—mysterious particles that could hold the key to the universe’s evolution.

The typical particle physics experiment is set up in one of two ways. In the first, two energetic particle beams collide into each other, generating a shower of other particles for scientists to study.

In the second, the particle beam strikes a stationary, solid material—the target. In this fixed-target setup, the powerful meeting produces the particle shower.

As the crash pad for intense beams, a target requires a hardy constitution. It has to withstand repeated onslaughts of high-power beams and hold up under hot temperatures.

You might think that, as stalwart players in the play of particle production, targets would look like a fortress wall (or maybe you imagined dartboard). But targets take different shapes—long and thin, bulky and wide. They’re also made of different materials, depending on the kind of particle one wants to make. They can be made of metal, water or even specially designed nanofibers.

In a fixed-target experiment, the beam—say, a proton beam—races toward the target, striking it. Protons in the beam interact with the target material’s nuclei, and the resulting particles shoot away from the target in all directions. Magnets then funnel and corral some of these newly born particles to a detector, where scientists measure their fundamental properties.

The particles that emerge from the beam-target interaction depend in large part on the target material. Consider Fermilab neutrino experiments.

In these experiments, after the protons strike the target, some of the particles in the subsequent particle shower decay—or transform—into neutrinos.

The target has to be made of just the right stuff.

“Targets are crucial for particle physics research,” says Fermilab scientist Bob Zwaska. “They allow us to create all of these new particles, such as neutrinos, that we want to study.”

Graphite is a goldilocks material for neutrino targets. If kept at the right temperature while in the proton beam, the graphite generates particles of just the right energy to be able to decay into neutrinos.

For neutron targets, such as that at the Spallation Neutron Source at Oak Ridge National Laboratory, heavier metals such as mercury are used instead.

Maximum interaction is the goal of a target’s design. The target for Fermilab’s NOvA neutrino experiment, for example, is a straight row—about the length of your leg—of graphite fins that resemble tall dominoes. The proton beam barrels down its axis, and every encounter with a fin produces an interaction. The thin shape of the target ensures that few of the particles shooting off after collision are reabsorbed back into the target.

“As long as the scientists have the particles they need to study, they’re happy. But down the line, sometimes the targets become damaged,” says Fermilab engineer Patrick Hurh. In such cases, engineers have to turn down—or occasionally turn off—the beam power. “If the beam isn’t at full capacity or is turned off, we’re not producing as many particles as we can for science.”

The more protons that are packed into the beam, the more interactions they have with the target, and the more particles that are produced for research. So targets need to be in tip-top shape as much as possible. This usually means replacing targets as they wear down, but engineers are always exploring ways of improving target resistance, whether it’s through design or material.

Consider what targets are up against. It isn’t only high-energy collisions—the kinds of interactions that produce particles for study—that targets endure.

Lower-energy interactions can have long-term, negative impacts on a target, building up heat energy inside it. As the target material rises in temperature, it becomes more vulnerable to cracking. Expanding warm areas hammer against cool areas, creating waves of energy that destabilize its structure.

Some of the collisions in a high-energy beam can also create lightweight elements such as hydrogen or helium. These gases build up over time, creating bubbles and making the target less resistant to damage.

A proton from the beam can even knock off an entire atom, disrupting the target’s crystal structure and causing it to lose durability.

Clearly, being a target is no picnic, so scientists and engineers are always improving targets to better roll with a punch.

For example, graphite, used in Fermilab’s neutrino experiments, is resistant to thermal strain. And, since it is porous, built-up gases that might normally wedge themselves between atoms and disrupt their arrangement may instead migrate to open areas in the atomic structure. The graphite is able to remain stable and withstand the waves of energy from the proton beam.

At Fermilab, scientists and engineers are also testing new designs for what will be the lab’s most powerful proton beam—the beam for the laboratory’s flagship Long-Baseline Neutrino Facility and Deep Underground Neutrino Experiment, known as LBNF/DUNE.

LBNF/DUNE is scheduled to begin operation in the 2020s. The experiment requires an intense beam of high-energy neutrinos—the most intense in the world. Only the most powerful proton beam can give rise to the quantities of neutrinos LBNF/DUNE needs.

Scientists are currently in the early testing stages for LBNF/DUNE targets, investigating materials that can withstand the high-power protons. Currently in the running are beryllium and graphite, which they’re stretching to their limits. Once they conclusively determine which material comes out on top, they’ll move to the design prototyping phase. So far, most of their tests are pointing to graphite as the best choice.

Targets will continue to evolve and adapt. LBNF/DUNE provides just one example of next-generation targets.

“Our research isn’t just guiding the design for LBNF/DUNE,” Hurh says. “It’s for the science itself. There will always be different and more powerful particle beams, and targets will evolve to meet the challenge.”