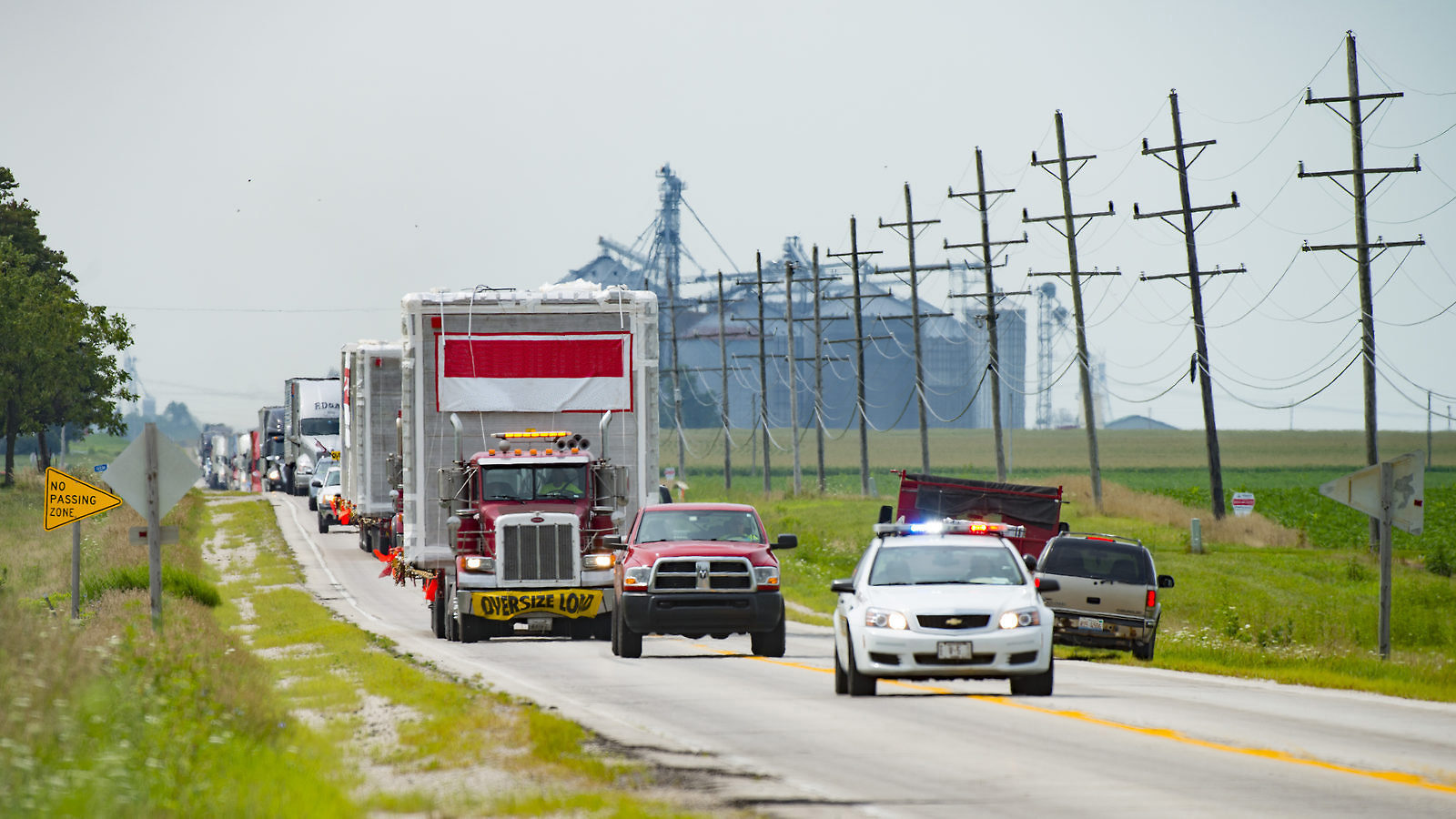 What do you do with 800 square feet of scintillator from an old physics experiment? Cut it up and give it to high schools to make cosmic ray detectors, of course.

And what about an 800-ton magnet originally used to discover new particles? Send it off on a months-long journey via truck, train and ship halfway across the world to detect oscillating particles called neutrinos.

It’s all part of the vast recycling network of the physics community, where decommissioned experimental equipment and data are reused, re-analyzed and repurposed, giving expensive materials and old tapes of data second or even third lives—often in settings vastly different from their original homes.

For physicists whose experiments can easily cost millions or even billions of dollars, such reuse is not just thrifty, it’s essential for building next-generation experiments.

When experiments are shut down, “the vultures come knocking at your door,” jokes Jonathan Lewis, deputy head of the particle physics division at Department of Energy’s Fermi National Accelerator Laboratory. He was in charge of decommissioning the Collider Detector at Fermilab (CDF) experiment in 2011. “You try to get the word out, but people in the community know what experiments are being shut down. They start to look to see what’s available.”

Shipping magnets around the world

Take, for example, the UA1 experiment magnet. Originally built in 1979, it was part of a particle detector at CERN that discovered the W and Z bosons. After that experiment shut down in 1990, it was used in the NOMAD neutrino experiment from 1995 to 1998. But then it sat outside at CERN, rusting a bit and waiting for its next home, which would ultimately be the T2K neutrino experiment in Japan.

“Even with the amount of work needed to refurbish it, and the cost of transporting it, it was still worthwhile to reuse it,” says Chang Kee Jung, US principal investigator for the experiment and professor at Stony Brook University. “Usually when you are using old equipment, it’s like driving a used car. The parts aren’t new, so it will break down more often, and you will have more maintenance costs. But magnets generally have much longer lifetimes than other devices, since they are rather simple equipment.”

In 2009, the magnet was dismantled, cleaned and polished. Most of it was then loaded up into 35 containers, which traveled by train to Antwerp before being loaded onto container ships bound for Japan. The magnet eventually reached the J-PARC facility north of Tokyo and became part of the T2K neutrino oscillation experiment.

Magnet reuse is common—even magnets from MRI scanners have been reused in physics experiments—but their special transportation often makes headlines. In 1979, Argonne National Laboratory sent a 107-ton superconducting magnet to what is now called SLAC National Accelerator Laboratory. Jung recalls stories about local news stations reporting on its 20-day journey via a special tractor-trailer, which took up two lanes of interstate highway while traveling 25 miles per hour. The Muon g-2 experiment at Fermi National Accelerator Laboratory in Illinois uses a giant magnet transported 3200 miles by land and sea from its original home at Brookhaven National Laboratory in New York. (That trip even had its own hashtag: #bigmove.)

But magnets prove their worth. Even as the UA1 magnet nears its fifth decade, Jung imagines it still has a good decade worth of life left. “Second lives for equipment in physics are not unusual, but to have a third life like this is unusual,” he says. “This is probably the longest-used magnet.” 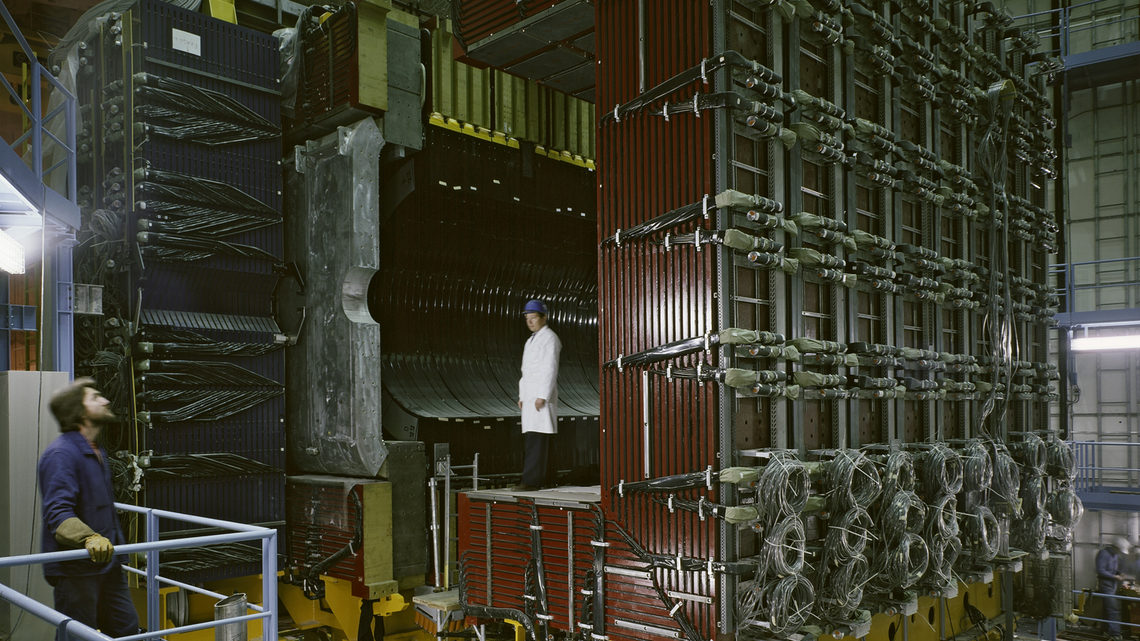 Scientists and technicians install the UA1 magnet in its original home at CERN. 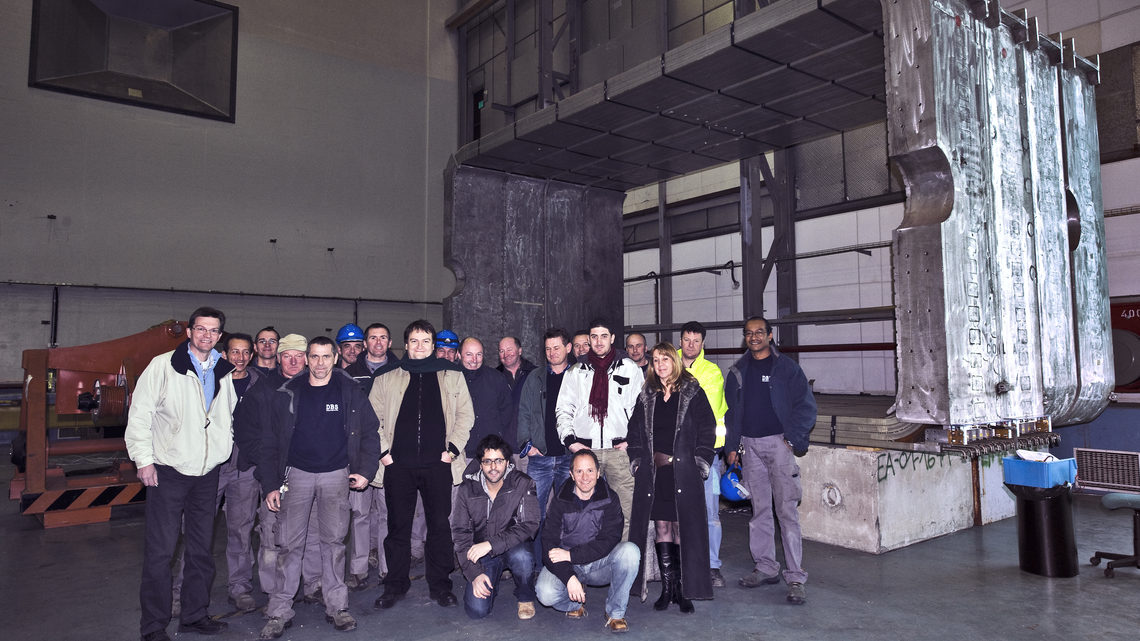 UA1 project leader André Rubbia stands in front of the magnet coils with some of the members of the CERN logistics and transport teams. 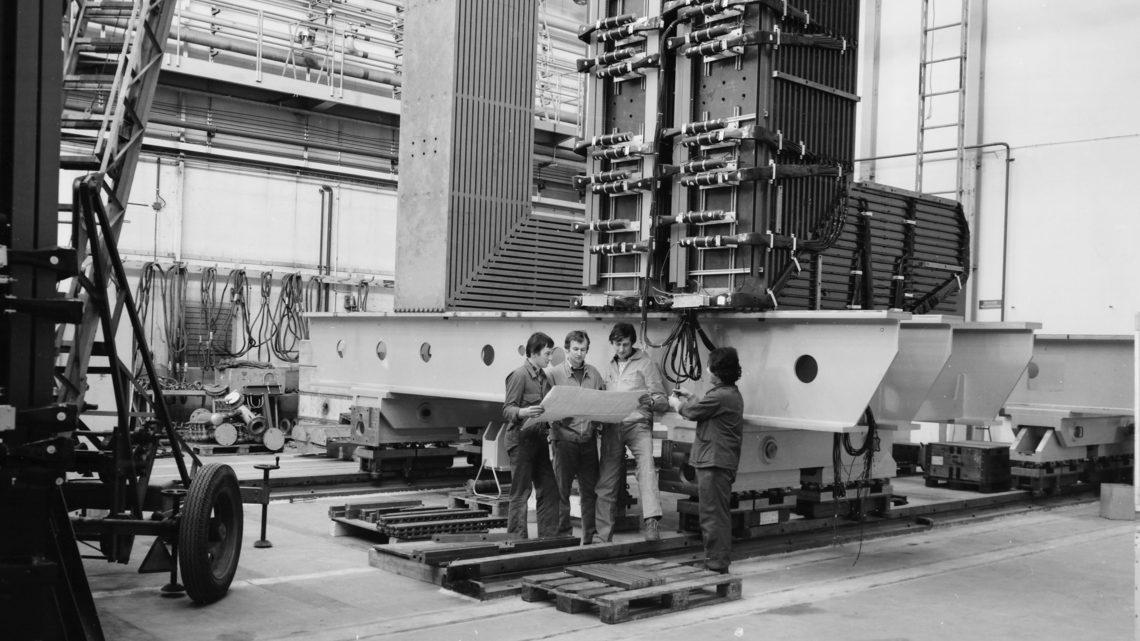 UA1, which stood for "Underground Area 1," was a particle detector at CERN's Super Proton Synchrotron that ran from 1981 to 1990. 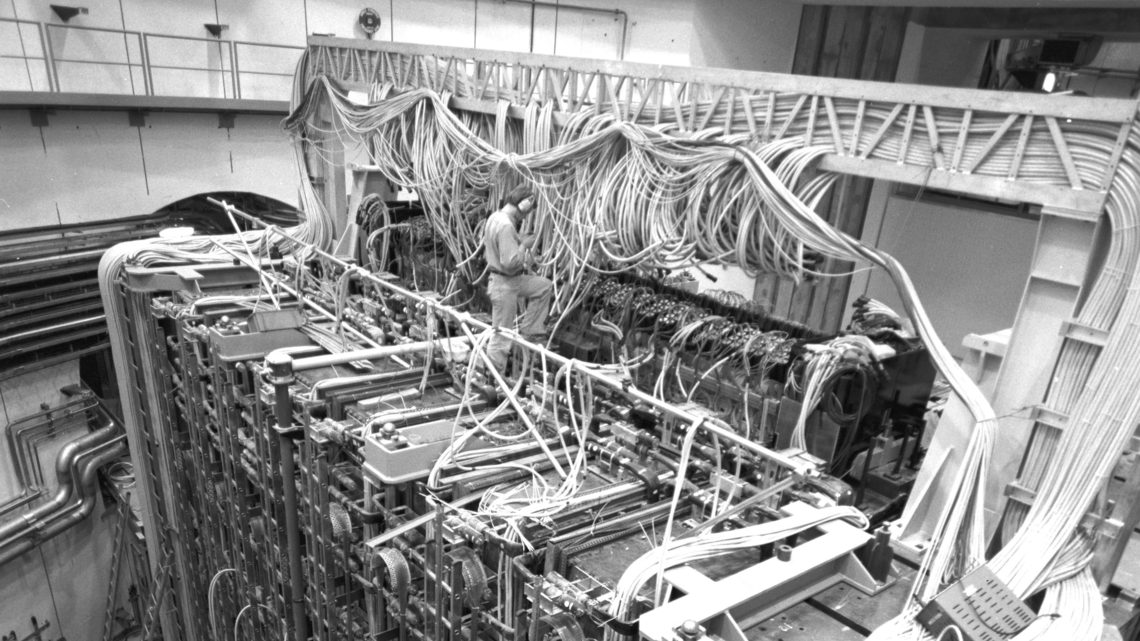 UA1 recorded the tracks of charged particles curving in a 0.7 Tesla magnetic field. 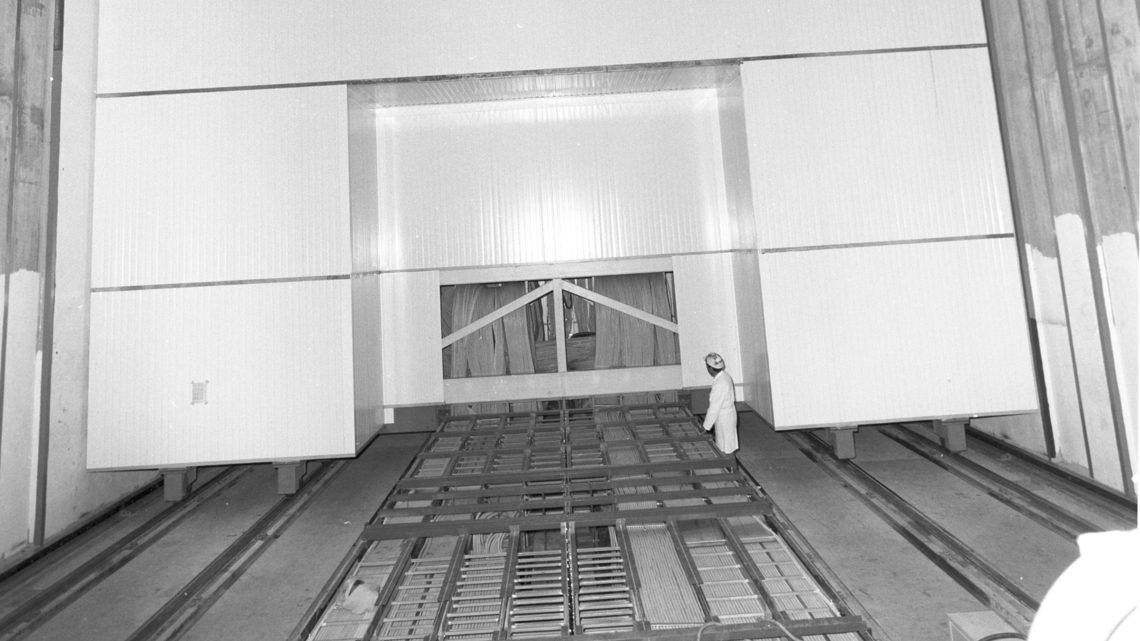 The UA1 detector was designed as a general-purpose detector. 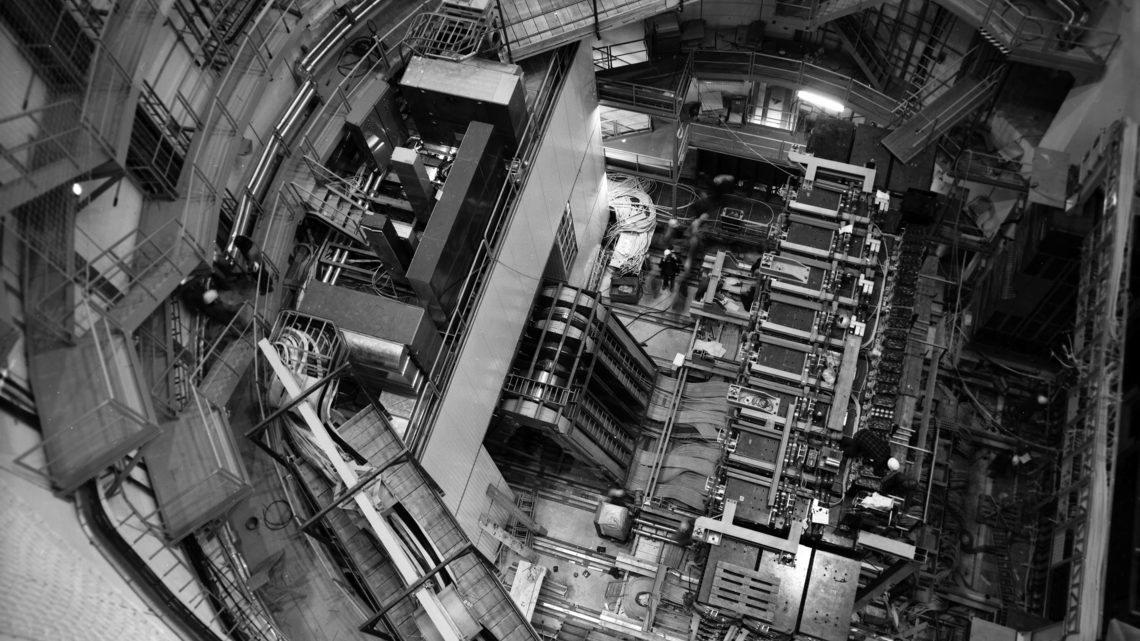 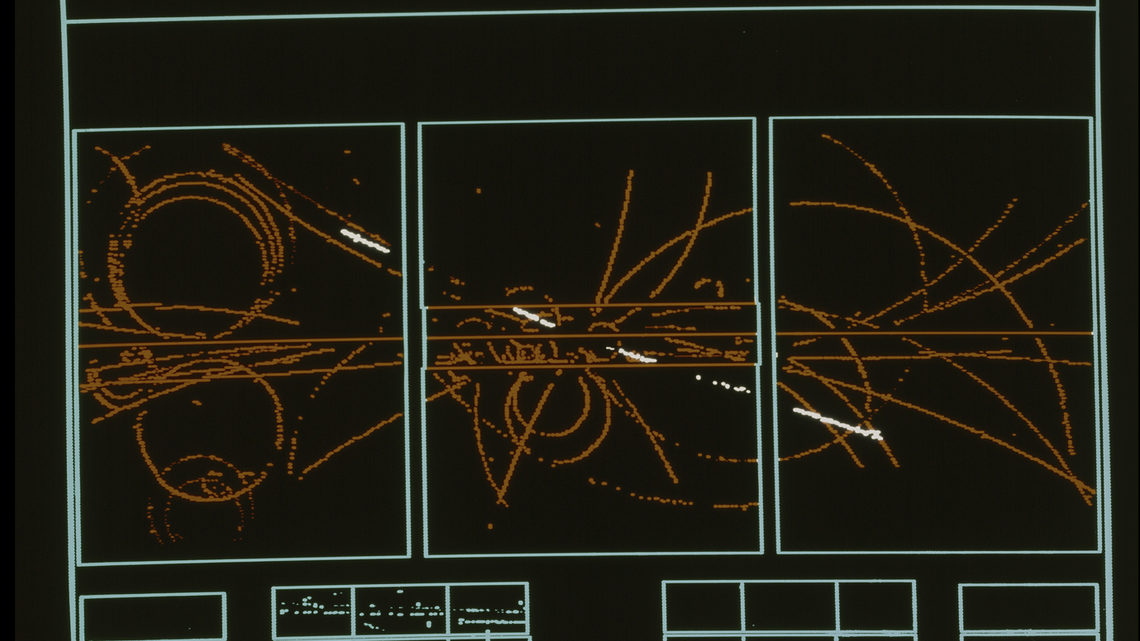 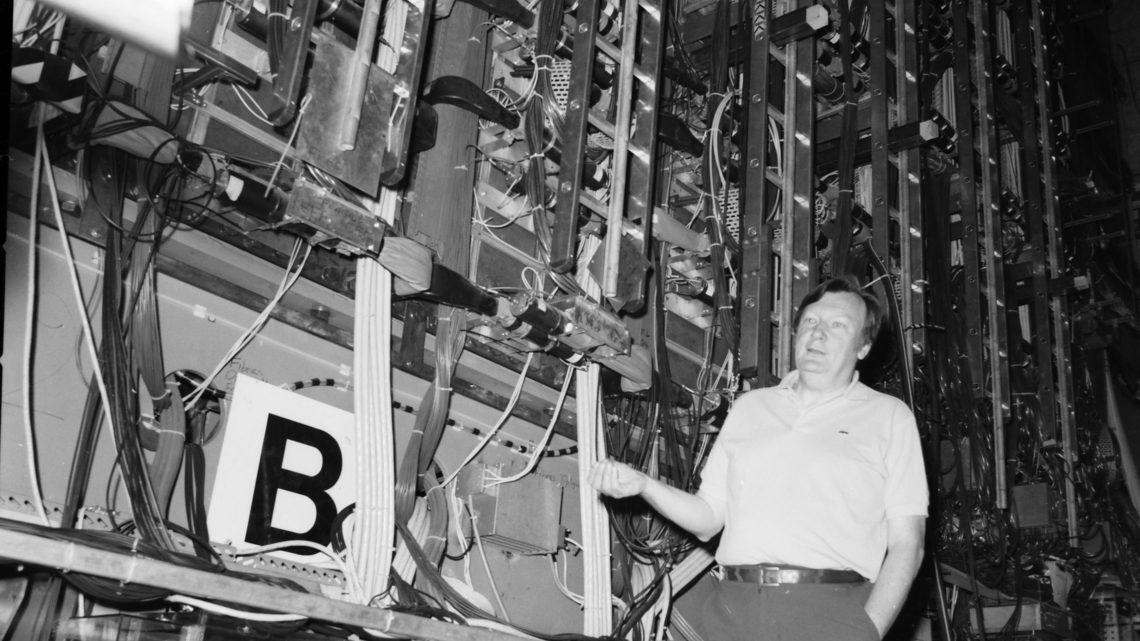 The joint discovery of the W and Z bosons by UA1 and UA2 earned Carlo Rubbia, pictured here, and Simon van der Meer the Nobel Prize for Physics in 1984.

The UA1 magnet moved next to the NOMAD neutrino experiment at CERN. 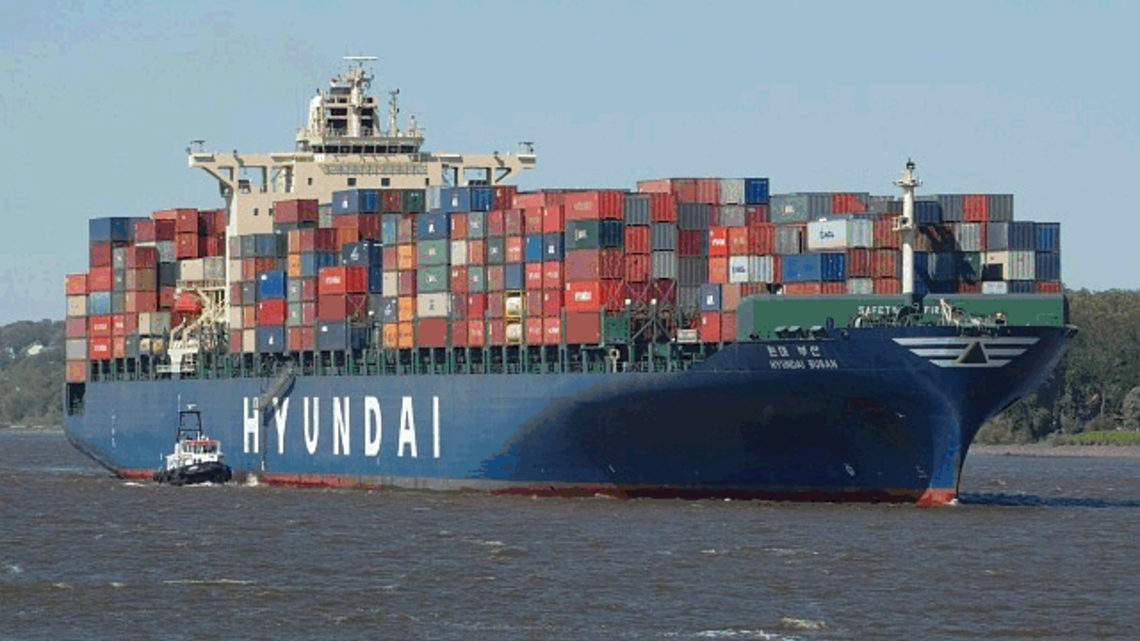 Transporting the UA1 magnet to Japan for use in the T2K neutrino experiment was one of the largest-scale long-distance shipments CERN had ever organized. 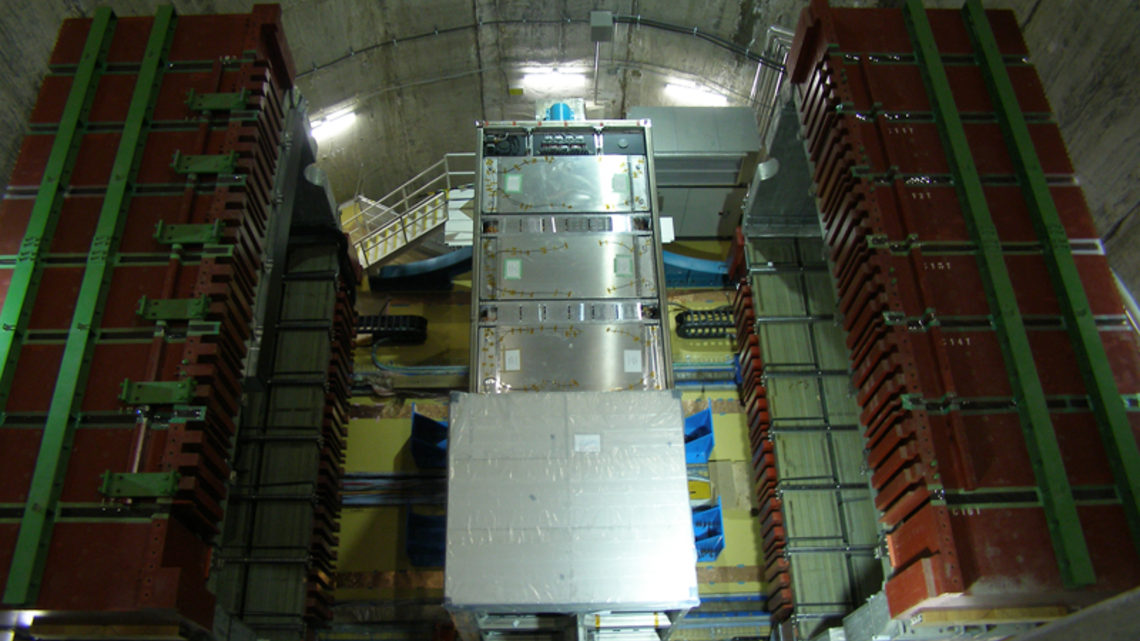 The UA1 magnet found a new home in the T2K neutrino experiment in Japan.

Courtesy of J-PARC
Previous Next

Absorbing an old experiment into a new one

Sometimes, entire detectors are absorbed from one experiment to another. That was the case with ICARUS, the first large-scale time projection liquid-argon neutrino detector. It started out at the Laboratori Nazionali del Gran Sasso in Italy to look for neutrino oscillations over a long baseline, then was transported to CERN for refurbishment and then to Fermilab in 2017. There, it will join the lab’s program to search for sterile neutrinos, which could help solve questions about the origin of our universe. The detector survived a complex journey, traveling thousands of miles via truck and barge. (Hashtag: #IcarusTrip.)

Physicist Angela Fava transferred labs along with the experiment. Fava worked with the detector in graduate school and is helping to install it at Fermilab as part of a trio of experiments in the Short-Baseline Neutrino program. In Italy, the detector found only a couple neutrino interactions per day; in its new role, it will likely detect that amount every minute. Fava says it is up for the challenge.

“I thought it was amazing how the same detector can adapt to such different conditions of operation,” she says. “It gives you an idea of how flexible detection technology can actually be.”

ICARUS also reuses parts from other experiments, including plastic scintillators from the concluded MINOS experiment. 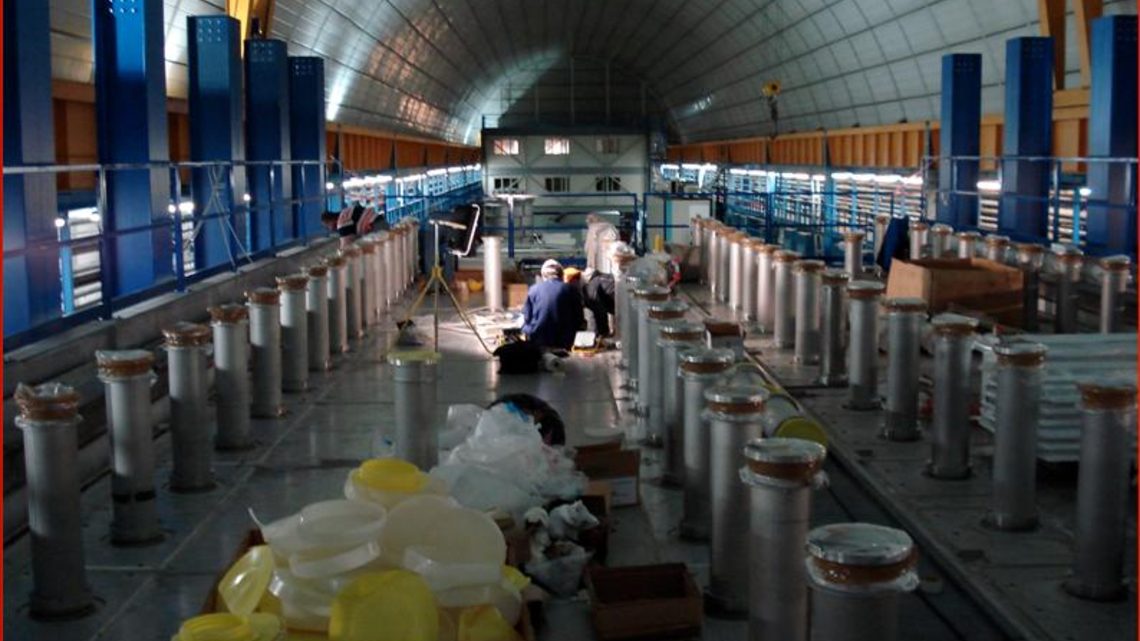 The ICARUS experiment began at Gran Sasso Laboratory in Italy. 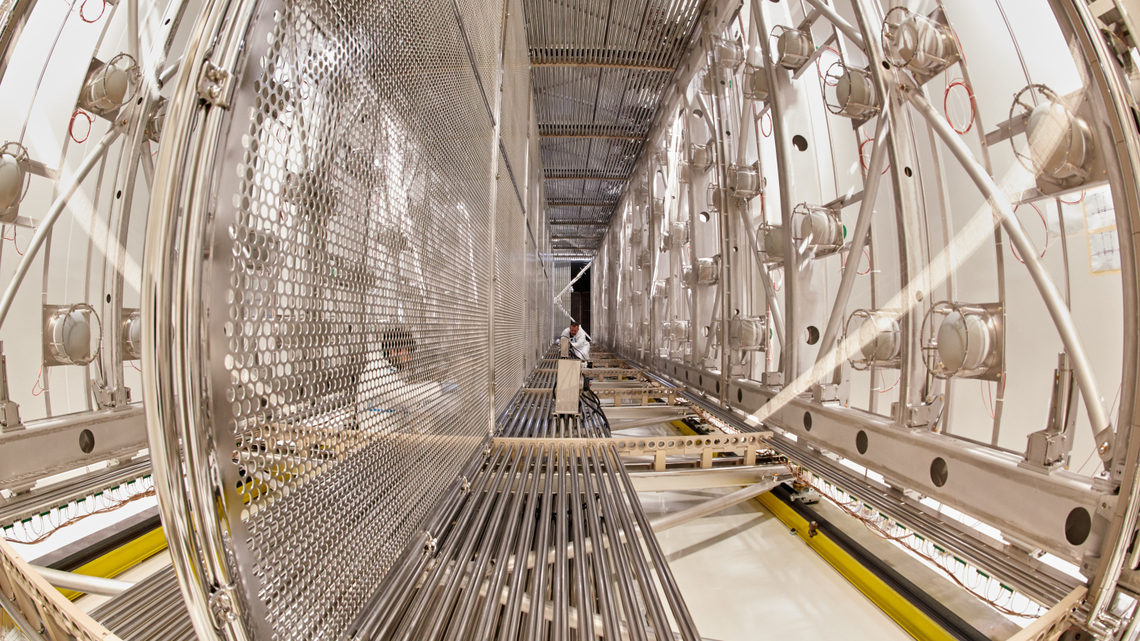 The ICARUS detector is the largest liquid-argon neutrino detector in the world. 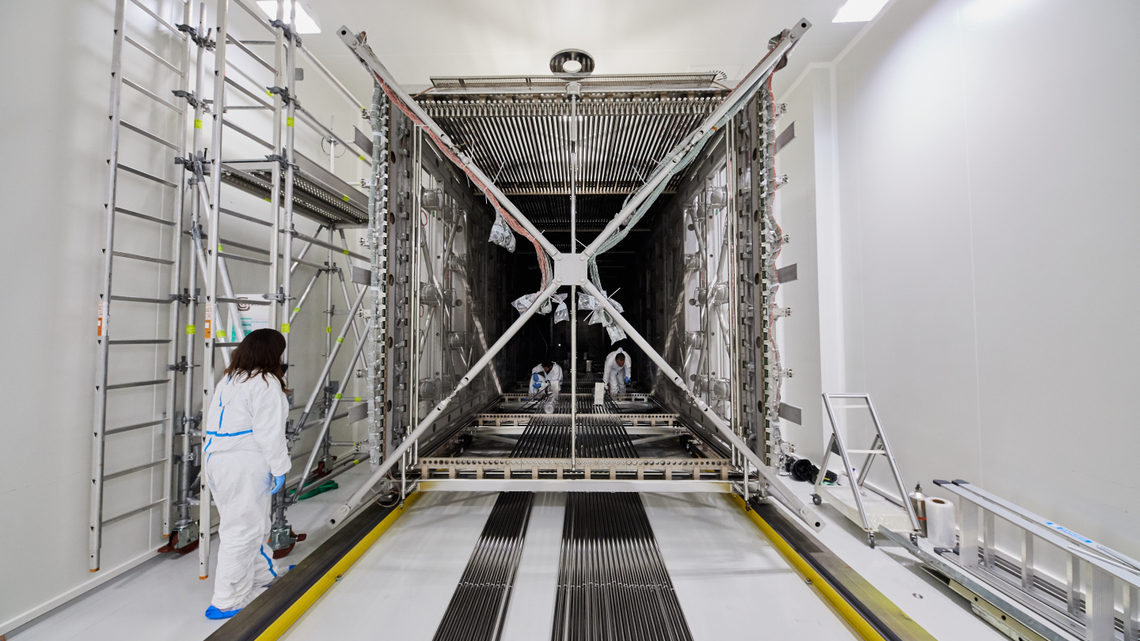 The experiment was refurbished at CERN in Switzerland. 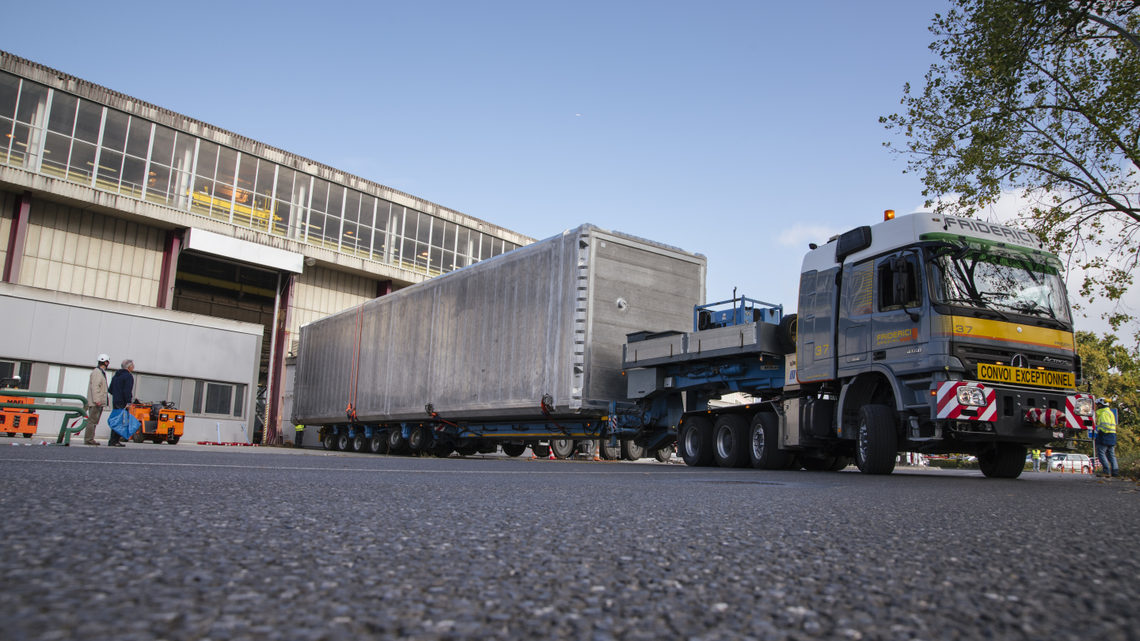 The ICARUS detector then began a long journey to Fermilab in the United States. 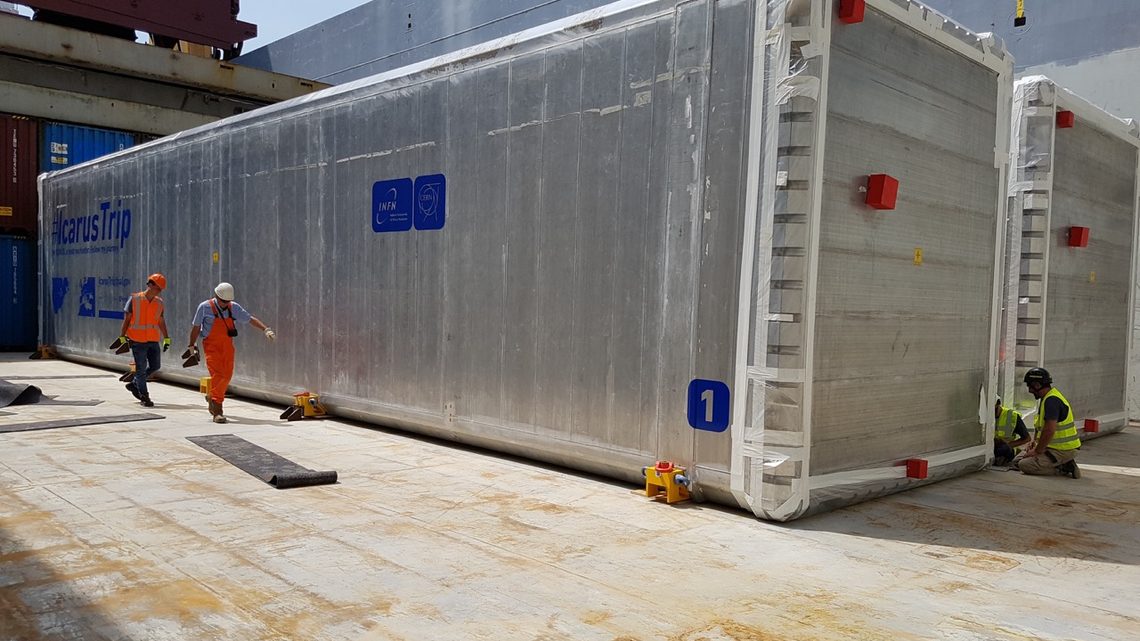 In June 2017, the ICARUS detector was loaded on a barge in Antwerp, Belgium. 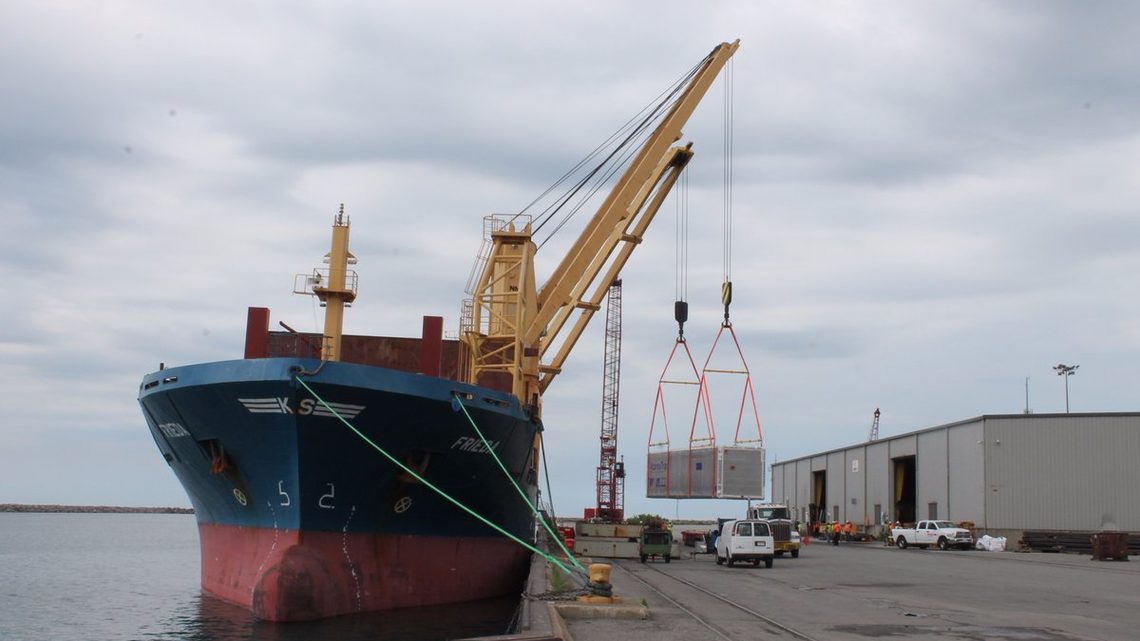 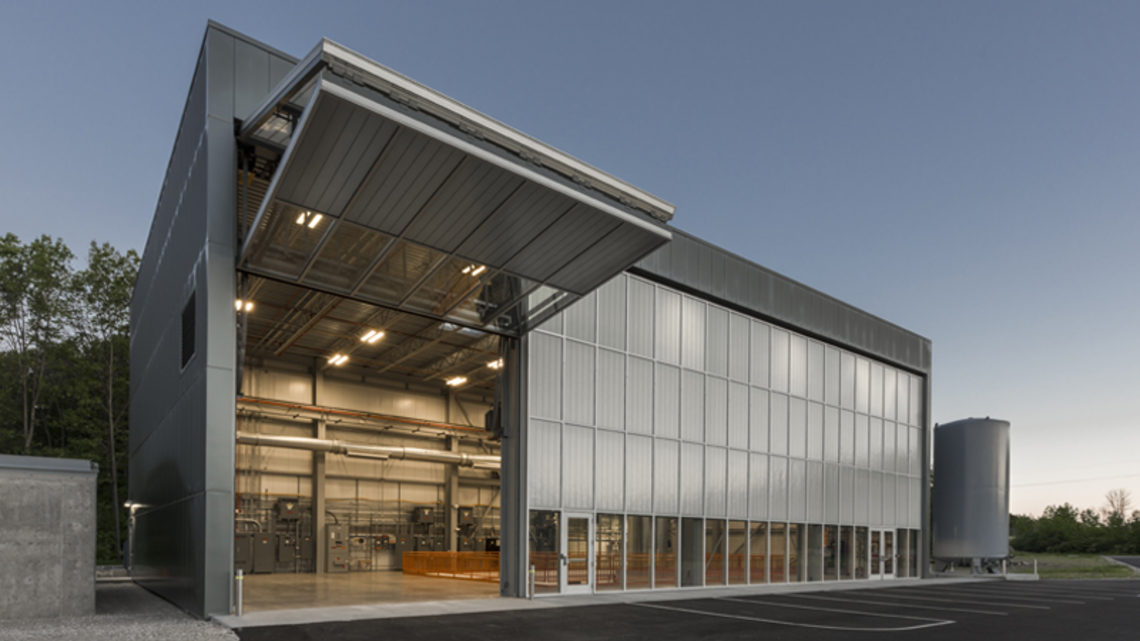 It then traveled to Fermilab to become part of the Short Baseline Neutrino Program, part of which is housed in this building. 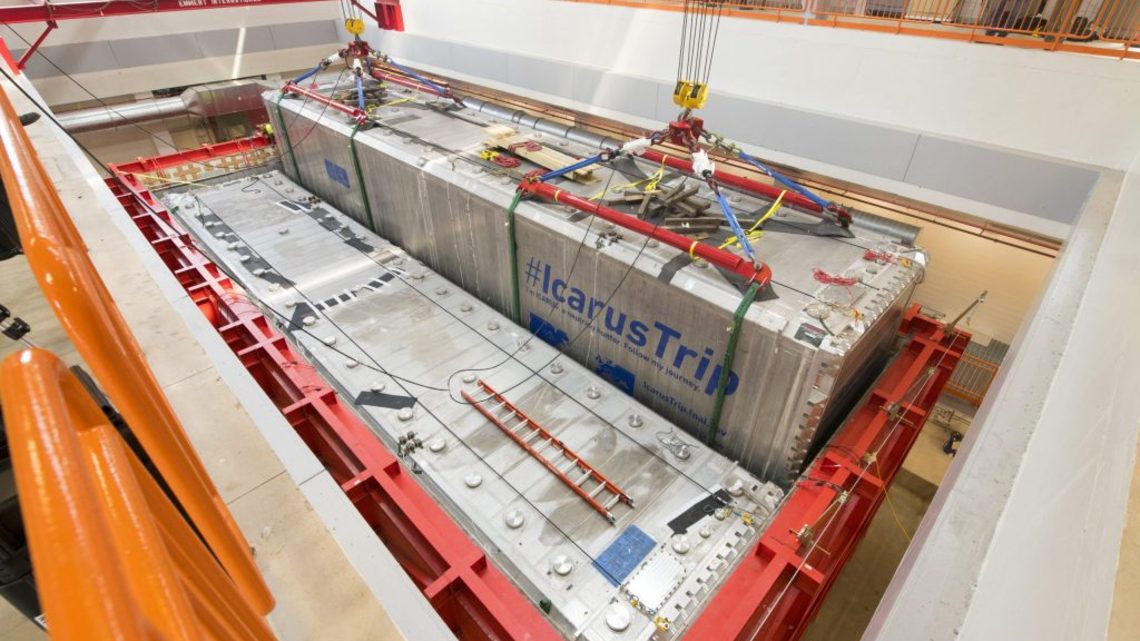 The ICARUS detector was installed in its Fermilab research hall in 2018.

Physics experiments don’t just reuse their own equipment—they also often give second lives to non-scientific facilities and resources. Old mines, with their hollowed-out underground sites shielded from cosmic rays, have been the sites of countless physics experiments. The Homestake Mine in South Dakota houses several experiments, including the Majorana Demonstrator, LUX dark matter experiment, and the upcoming Deep Underground Neutrino Experiment. The Mozumi Mine in Japan has been home to many experiments, including the Super-Kamiokande, and a set of experiments (KamiokaNDE, KamLAND, and KamLAND-Zen) that have all re-used the same neutrino detector.

Other resources have found new life in physics experiments: the Sudbury Neutrino Observatory in Canada, for example, once borrowed 1000 tons of heavy water from Canadian nuclear reactors to use in a neutrino detector.

And the CDF experiment, which studied high energy proton-antiproton collisions at Fermilab’s Tevatron collider, was partially constructed using steel from decommissioned battleships. That experiment ultimately paid it forward by disassembling and sharing a long list of experimental equipment after it was shut down in 2011. Lewis can cite where everything went: phototubes to India, electronics to Italy, computer servers to South Korea. Here in the United States, Brookhaven National Laboratory and Jefferson Lab got hundreds of phototubes for nuclear physics experiments, and 1000 tons of the old battleship steel will be used as shielding for the Long-Baseline Neutrino Facility target.

The 800 square feet of scintillator was sent to QuarkNet, an educational program, to be used as cosmic ray detectors for high schools.

“All that’s left is the magnet and a few detector pieces that are on display,” he says. “And a legacy of over 700 papers and lots of memories. In fact, people are still doing analysis on the data.”

Data can be analyzed and looked at anew for years to come.

That’s the case for DZero, the other experiment on the Tevatron at Fermilab that ran from 1992 to 2011. In its heyday, the experiment revealed particles like the top quark. Though it shut down soon after the start of the Large Hadron Collider, scientists have data from about 10 billion events that still have a story to tell. Dozens of papers from that data have been published in the last six years.

“They are probably not Nobel Prize-winning measurements, but they are very important for understanding specific areas in particle physics,” says Dmitri Denisov, a distinguished scientist at Fermilab and spokesperson for the DZero experiment. For example, the data has been important in searching for exotic particles, a field that did not become popular until after the Tevatron shut down.

From experiment to education

Perhaps one of the most inspirational ways for experiments to live second lives is as educational displays. The DZero experiment was left mostly intact, and now thousands of visitors per year can stand right next to a four-story particle detector Fermilab scientists used to discover the top quark.

Denisov sometimes leads tours of high school students through the control room, where computer screens still look as though they are taking data. “You can see how excited the students are,” he says. “It shows them the joy of complex particle physics experiments. That’s probably the best second life that none of us expected.”